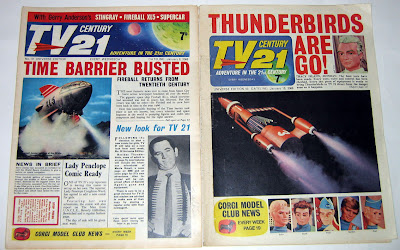 Launched in January 1965 TV Century 21 had proven to be a huge success. With its close association with Gerry Anderson the comic had been producing superb new serials featuring Stingray, Fireball XL5, Supercar... and a character named Lady Penelope who didn't seem to appear in any tv show... yet. However, by September of 1965 all was revealed when Anderson's new show Thunderbirds premiered on ATV.

It was inevitable that Thunderbirds would appear as a strip in TV21, and teasers appeared for several weeks before its debut. With issue 51 (dated January 8th 2066, on sale Jan.5th 1966) the big news was revealed. Not only would Thunderbirds be coming to TV21 but so would two other tv related strips; The Munsters, and Get Smart, plus a couple of new features International Rescues and Dateline 2066. 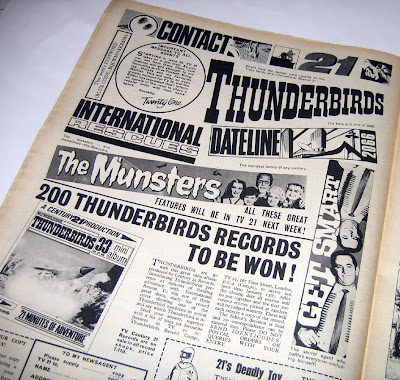 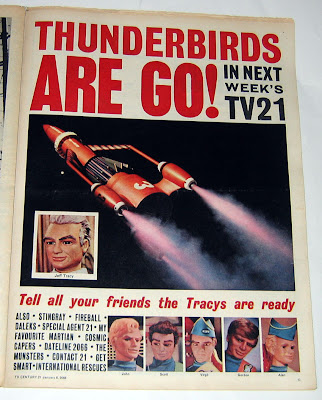 Obviously space was needed in the 20 page weekly for the new arrivals, so with that issue TV21 bid farewell to Burke's Law, Supercar, and Lady Penelope. The surprising news was that Lady Penelope would begin her own spin-off comic the following week.

The Lady Penelope strip in that issue, illustrated by Eric Eden, saw the character of Jeff Tracy make his first comic strip appearance, commissioning Penny as the British agent for International Rescue. This was the charm of TV21; that it could establish little behind the scenes links with the Gerry Anderson tv series, not least because the editor Alan Fennell was also a writer on Anderson's tv shows. 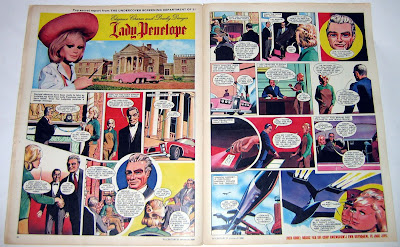 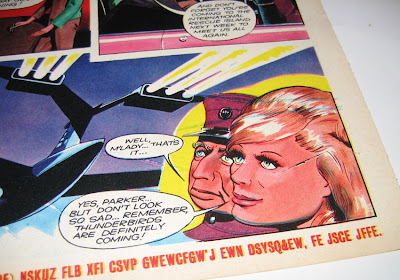 With the following issue of TV21 readers noticed the changes straight away, with a new more compact logo on the cover. (This logo enabled more flexibility for the designers and would sometimes even be printed sideways.) As for the cover headline, there was no doubt as to what was the selling point. A revamp for the comic, but no free gift was required as a bold red THUNDERBIRDS ARE GO announcement grabbed the attention of kids across the UK. "Every wire, valve, and control has been checked" says the report, setting the comic in a future where there's no Internet but there are still valves.

Inside, the comic led with 21 Special Agent graduating to two pages from his previous one, illustrated by Rab Hamilton. 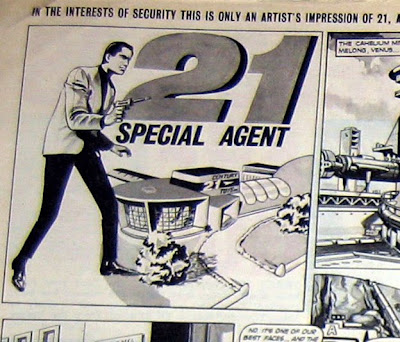 Favourites Stingray and My Favourite Martian were still present, but a new humour strip The Munsters, based on the popular American sit-com, began its run drawn by Paul Trevilion. 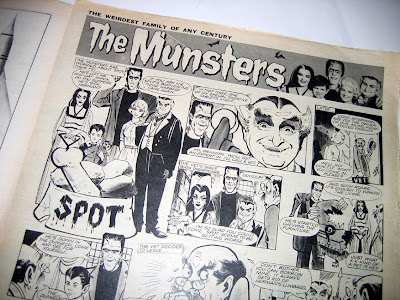 However, it was the centre spread that was the main event. Although the tv series was made in colour, Thunderbirds was only airing in the UK then in black and white, but in TV21 here it was in glorious full colour! 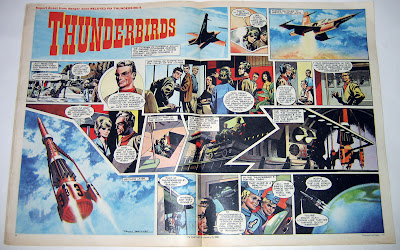 The artist was Frank Bellamy, whose dynamic, stylized more-realistic artwork would earn him a legion of fans. (Personally, at six years old and too young to appreciate his craft, I found his work too dark, and would soon abandon TV21 for the fun and levity of the new Smash! comic. I changed my opinion a few years later of course.)

Thunderbirds was initially given three pages in the comic. A privilege, as other TV21 strips managed two at most. Facing the third page was an ad for the new Lady Penelope comic. I remember being disappointed that it was only aimed at girls, and having no sisters, I gave it a wide berth. However I imagine girls must have thought Lady Penelope was the coolest looking comic ever. It definitely made Bunty and June look frumpy. 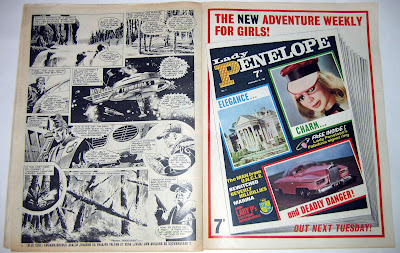 On the next spread, Dateline 2066 began with its fabricated futuristic news stories, and the present-day Get Smart strip, "reported through the TV 21 time machine". There's a bit of well-deserved self-congratulation for TV21 at the foot of Dateline 2066 as it reports that in its first year it outsold all other comics aimed at children. 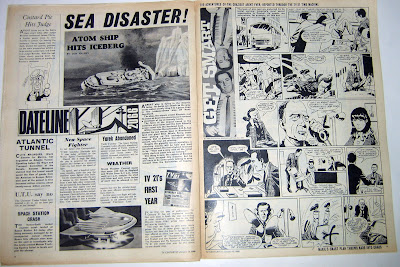 One of my personal favourites Fireball XL5 was still in the comic, excellently drawn by Mike Noble whose cool, clear artwork was always more appealing to me than Bellamy's approach. 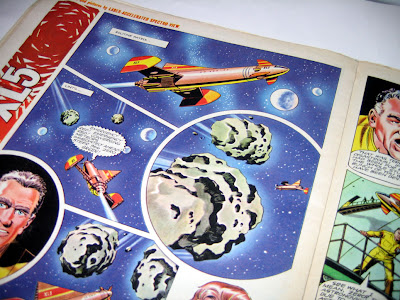 The Daleks still held their place on the back cover, with Eric Eden taking over the art duties from Ron Turner for seven weeks. 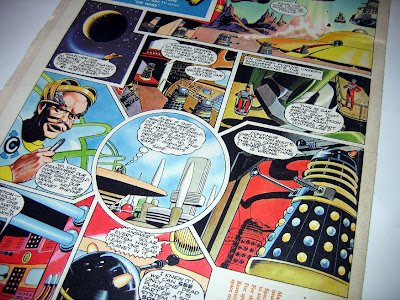 Even looking back at it now, TV Century 21 still looks modern and appealing. As a comic pretending to be set in the 21st Century it's certainly more sophisticated than the actual children's comics of our present time. The scripts were sometimes let down by plot holes, dodgy internal logic, or all-too-convenient twists (as were many UK adventure strips of the time) but it didn't talk down to the readers. As for the artwork, people such as Frank Bellamy and Mike Noble have rarely if ever been equaled. 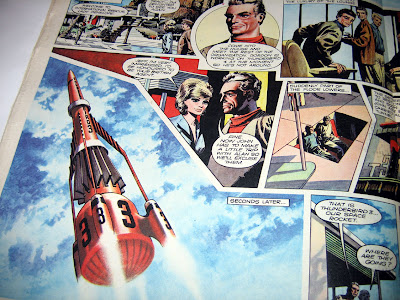 For more information about strips based on Gerry Anderson shows (and the history of TV21) visit the incredible Technodelic website:
http://www.technodelic.pwp.blueyonder.co.uk/

The first Thunderbirds issue of TV21 always makes me think of Crunchie bars - because a TV ad for the comic was immediately followed by an ad for Crunchie one tea-time in early 1966, thereby for ever after tying the two things together in what passes for my memory!
Your point about the new 'square' logo for the comic being more flexible and even being used at right angles reminded me that when I first saw it at 90 degrees, it totally blew my mind! (Well, it was the 60s!) I thought " Can they DO that?! Is it ALLOWED?!"

I'd forgotten how good a comic TV21 was. Thanks for the reminder.

I've said it before but I agree regarding Bellamy/Noble. I too liked Noble better and now wouldn't dare state one was better as they both did different things! Noble's colouring was those lovely primary colours I loved as a kid. Bellamy used design techniques in his colours, balancing blocks of tone, which as a kid I didn't understand. Mind you I loved his images of the Thunderbird craft!
It was Bellamy's Radio Times work that woke me up in my teens to what an illustrator he was! Better late than never
Thanks again Lew

I particularly liked the way Bellamy drew the Thunderbirds characters as real people rather than puppets. As a kid, that's just how I saw them. I still have all my TV21s in the attic - my wife has her Jimmy Choos, but those comics are my treasures.

Yeah, that's the aspect I liked about TV21; that the strips did look more realistic than the tv shows. Maybe it was something else that put me off Bellamy's work when I was six. I dunno. I know I dropped the comic only a few weeks into the arrival of Thunderbirds, and didn't buy TV21 again until April 1969, when I became a regular reader once more. I've bought all the back issues since though.

I still remember TB1 getting charged by a rhino in Africa - never was the Dark Continent so dark, wild and sweltering as when Bellamy drew it! But yes, his drawing style, graphic design ethic and especially the high-contrast inking with those heavy blacks certainly nudged his work towards realism, whereas Noble's clean, traditional comic style meant his characters were more relatable. I guess Bellamy's characters were on the edge of the Uncanny Valley, as the term is today. Thinking back, I probably didn't warm to the Thunderbirds strip so much at the time, but those big machines kept me reading. And any comic with Fireball and Daleks was always going to be the great love of my life.

It's worth following blog comment threads, isn't it? Until Dave mentioned the 'Uncanny Valley' I had not heard of it. What a great way of thinking about the interpretation of those heads that Bellamy hated drawing.

Nancy (his widow) tells a brilliant story of how Frank placed the heads (which he was given by Anderson's studio) in his son David's bed and frightened the living daylights out of him!

Were the "wires" that were being checked those that held the characters up?