Late last year, Comic Heroes magazine (published by British outfit Future Publishing) underwent a metamorphosis. Previously it had been sold in a card envelope, packaged with the preview comic Sidekick and a free gift or two (usually badges and a poster). A few issues ago it ditched those extraneous parts, absorbed Sidekick into its back pages, switched from bi-monthly to quarterly, increased its size, its paper quality, - and its price. Now it's a chunky 164 page magazine costing £9.99 an issue.

Ten quid for a magazine? Is it worth it? Well, yes, if you're "serious about comics" (the new strapline on the cover). There's a lot of material in here. Issue 23 has recently been published and amongst its contents it includes an interview with Denny O'Neill on his Batman years, a long feature on the history of Wonder Woman, a celebration of Hellboy's 20th anniversary, news on the new Amazing Spider-Man comic and much more. 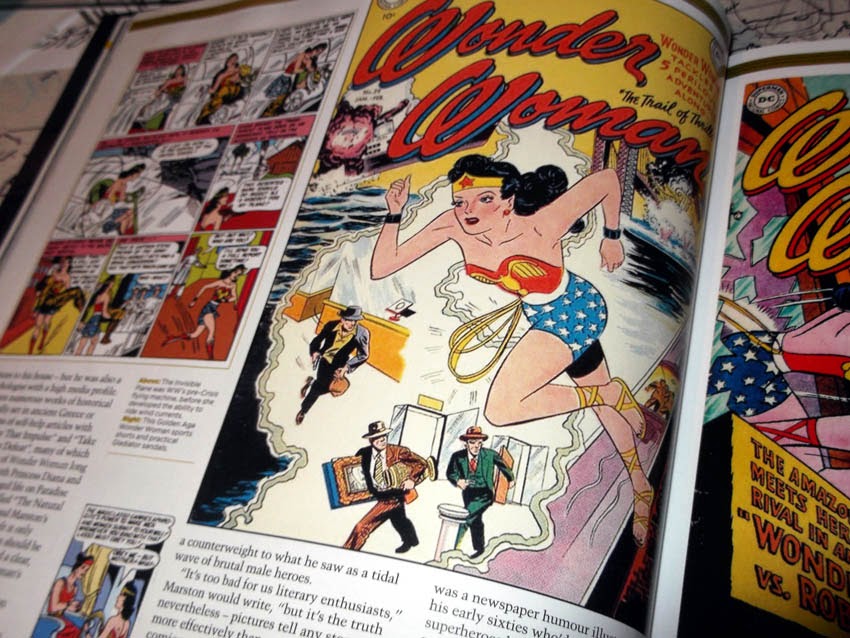 As you've guessed, although it's a UK magazine, Comic Heroes focuses mainly on American comics. That's to be expected, with superheroes being so big at the cinema thesedays. However, the mag does cover other areas too. Amongst such features, this issue includes interviews with Emma Vieceli, Rob Williams, James Robinson, Grant Morrison and others, plus an item by Lee Sullivan on capturing likenesses for TV and movie adaptations. 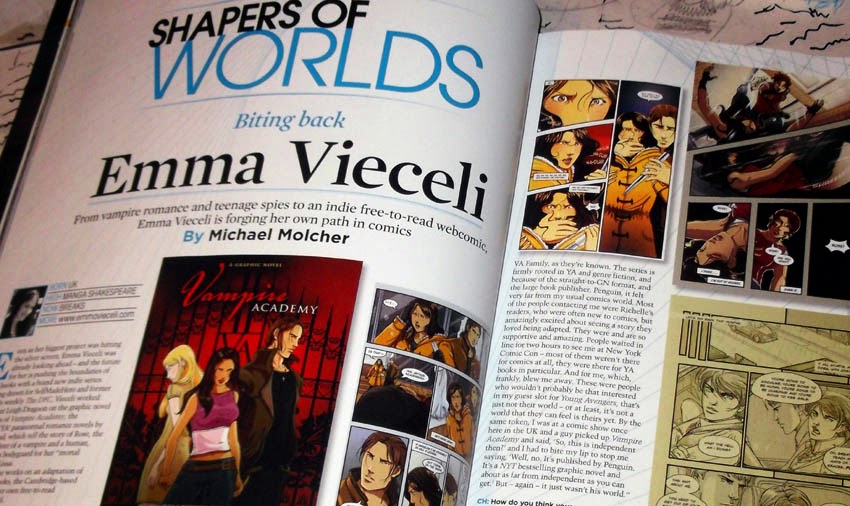 There's also a wealth of other features, including an article on the rise of digital comics. 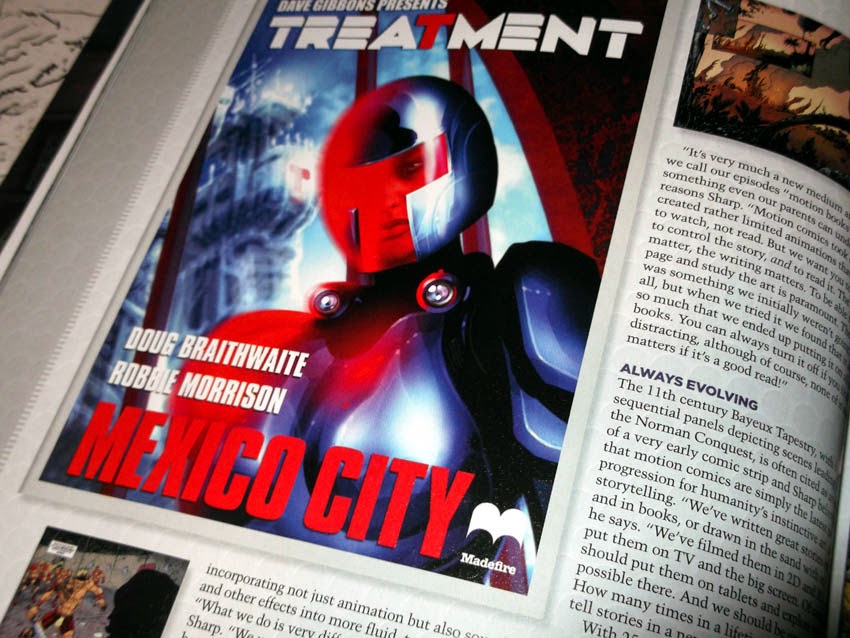 Something that may interest fans of classic UK characters is that the 5 page revival of Smasher (the giant robot from Bullet) that appeared in Future's digital mag Comic Review the other week is printed in the Sidekick section of this issue of Comic Heroes. So if you couldn't read it before because you didn't have access to the app, now's your chance. 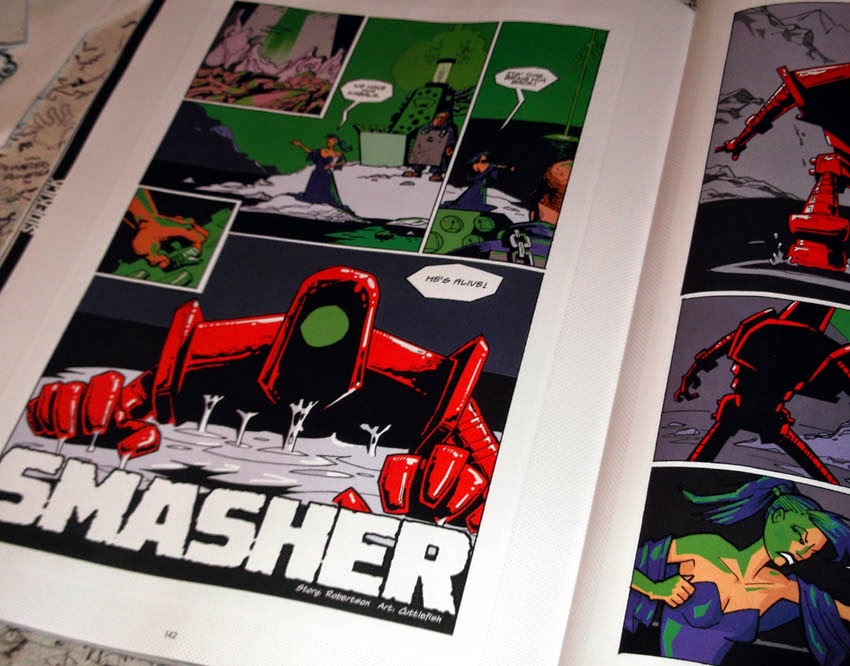 When Comic Heroes was launched several years ago, some people were predicting a short life for it due to its £7.99 cover price. Well, 23 issues later it's still here, and now £9.99. Can it continue to survive? Time will tell. Comic Heroes is mainly covering material that is aimed at the 16 to 30 cult comics/TV/movie demographic. That makes sense, although it would be nice to see a British magazine giving a handful of its pages to cover classic British material. (I wrote a couple of articles on UK comic history for the mag in its early days, but there's been little of that nature since.)

Comic Heroes No.23 is out now from WH Smith, Asda, selected newsagents, comic shops and other locations. Or you can read it as an app on an iPad or iPhone. More info:
http://www.sfx.co.uk/2014/04/17/comic-heroes-23-now-on-sale/?ns_campaign=comic_heroes_23&ns_mchannel=hb&ns_source=sfx&ns_linkname=fixed_ad&ns_fee=0
Posted by Lew Stringer at 02:05

I’m one of the people that gave up on this mag after the price-hike to a tenner, and I’m well-known for being stupid with my money when it comes to buying comics-related publications (just bought a lovely Lee-Romita Spidey newspaper-strip collection for – ulp! - £30). You’re right to point out that when Comic Heroes began, it covered a wider range of titles and themes – UK, alternative, euro, manga, etc – and I gave it my full support despite its then-already hefty price tag. I am “serious about comics”. But now it’s mostly a superhero magazine – current superheroes, the ones that keep on dying and coming back to life (a friend of mine died recently, can’t wait for him to pop up next year in a new costume). If it had remained more rounded in its coverage I might have stuck with it, but I can’t be bothered to pay that much to wade through 30 pages about the new Justice League or whatever.
I don’t see much of a future (pun intended) for Comic Heroes, especially seeing all the unsold copies recently in every branch of Smiths I happen into. If their target demographic is 16-30 year-olds, this is the age group that doesn’t buy magazines these days – they read everything online… on their phone… while they’re crossing the bloody road… So I doubt it’ll be around as a physical magazine much longer.
I suppose the main reason for it being so expensive, compared to other magazines, is that it has no advertising in it - which I’ve wondered about since the start. Future’s SFX has page after page of ads for movies, DVDs, games, etc – many of them comics-related – and I imagine that revenue allows them to keep its price at a reasonable level, and keep it selling. I can’t imagine why those same advertisers aren’t keen to flog their wares in Comic Heroes.
Why am I bothered enough to comment? I like magazines, I like magazines about comics, and I wanted this one to succeed. Oh well, between your site and Bleeding Cool, I can get all the historical and up-to-date comics info I need, for free. And I suppose this is the ‘ahem’ future.

I'm glad you have commented Steve, because you've mentioned some good points. The shortage of advertising compared to SFX is something I hadn't noticed. (I haven't read SFX for a while.) You're right. That probably accounts in part for the higher price. I'd imagine the print run may be lower than SFX's too, so it'd have a higher unit cost.

I only guessed that the demographic was 16 to 30 year olds as they seem to make up the average age range at cons and in comic shops. If its target range is broader than that, then they need more nostalgic features in there really.

I was really disappointed that they've now dropped the comics review. I know there's an online review magazine but it's only available from Apple and I only use Google Play. I quite enjoyed the latest issue all about Bat-Man and Wonder Woman even though I've only ever been a Marvel fan and I like the features such as the 25 Most Shocking Moments in comics history. I suppose I'll keep buying it but it's not a good omen that it's now every 3 months instead of every two. I wouldn't be surprised if it isn't around for much longer.