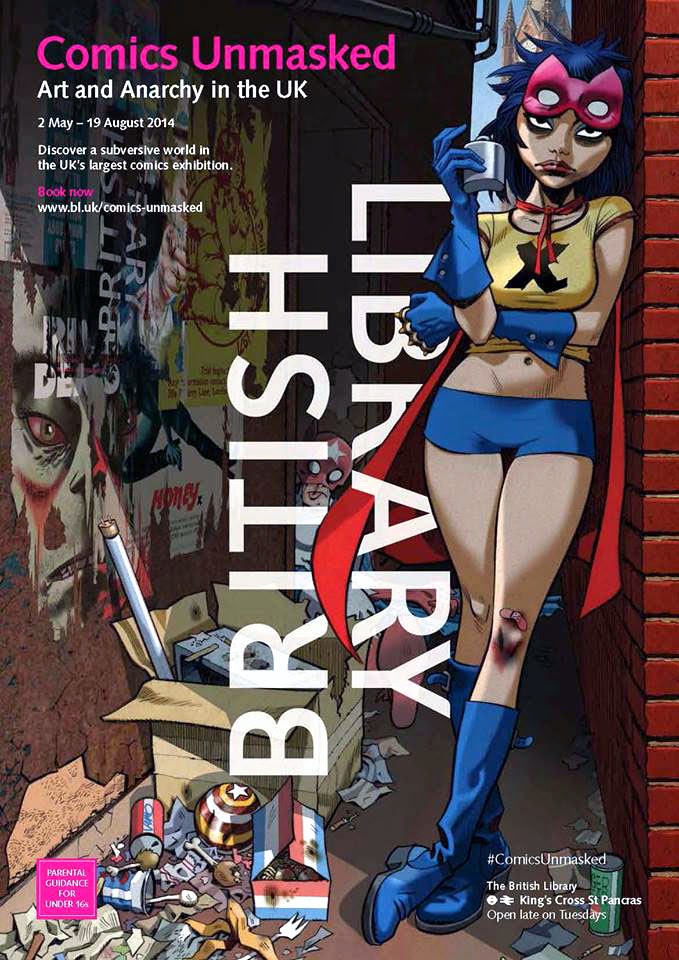 This Friday sees the start of a comics exhibition set to run all summer. Comics Unmasked: Art and Anarchy in the UK is at the British Library from May 2nd to 19th August 2014.

The exhibition focuses on the anti-establishment edge that British comics have often featured, from children's comics such as Action to adult 'underground' titles such as Knockabout Comics.

Sounds great! I'll definitely be visiting at some point. Here's the info from their website:


Comics Unmasked is the UK’s largest ever exhibition of mainstream and underground comics, showcasing works that uncompromisingly address politics, gender, violence, sexuality and altered states. It explores the full anarchic range of the medium with works that challenge categorisation, preconceptions and the status quo, alongside original scripts, preparatory sketches and final artwork that demystify the creative process.
Enter the subversive and revelatory world of comics, from the earliest pioneers to today’s digital innovators.
Parental guidance
Parental guidance is advised for visitors under 16 years of age due to the explicit nature of some of the exhibits on display. Within the exhibition, there is a separate section examining sexual themes which visitors can by-pass if they wish.
Please be aware that the Library retains the right to request proof of age. Visitors under 16 years of age who are unaccompanied by an adult will not be admitted.

Below: From my own collection, Zip Comics No.1 (1973). Cover by Rand Holmes. A British underground comic that was available in newsagents. 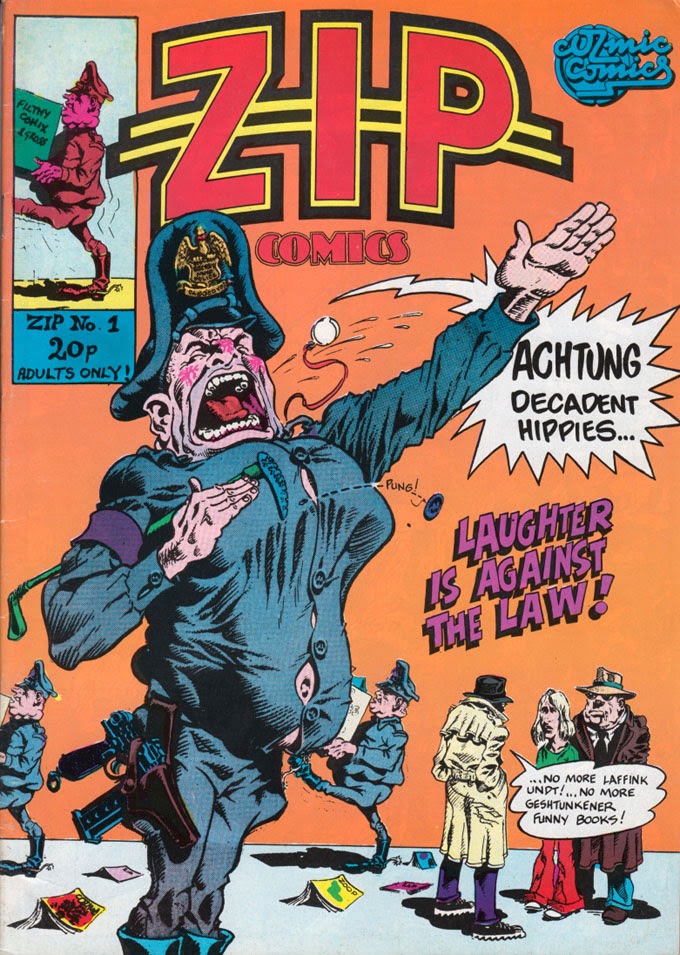 Hi Lew
I've got an invite to the press launch tomorrow morning, so I'll let you know of any particular highlights.

Thanks Steve. Enjoy the day!

Just spent a happy couple of hours at the press launch for ‘Comics Unmasked’. You can get the general gist of it from the British Library’s website, so here are a few subjective thoughts… I’ve seen a lot of rare comics through my work at the Cartoon Museum and my own solo escapades, so it was nice to see quite a few things that I’d heard about but never encountered, such as a 4 ft Alley Sloper ventriloquist doll from the 19th Century (if you find toy clowns scary, this will have you fainting with terror); there’s a copy of the booklet put out by the British Communist Party in the 50s to try and ban US-style ‘horror comics’; life-sized mannikins dressed as Occupy protestors in ‘V’ masks are stood around everywhere; there’s a lot of obscure radical small-press titles, a room devoted to ‘erotica’, and –yay- you can see the actual Oz strip that collaged Rupert Bear’s head onto a very rude Crumb strip. There’s not a lot of original art, the exhibits are the comics themselves, but there are a few nice pieces, including V for Vendetta, Watchmen and Zenith. The whole thing wraps up in a room devoted to, um, not comics… in that it’s full of interactive computer comics, Batman computer game footage, Gorillaz on a big screen… you know, the kind of stuff that isn’t comics in the same way that movies aren’t books… but yes, I know, I’m old and in the way…
Oddly, in an exhibition that mostly reflects subversion in comics, there’s no mention made of the Beano – tame now, but Dennis, Bash St, etc were to my mind pretty radical in the 50s. And I don’t recall seeing any VIZ.
If you like looking at old comics this is definitely worth the admission, but be prepared for the gnawing frustration of looking at the comics but being unable to pick them up… like beautiful unattainable women.

Many thanks for your report, Steve. Sounds interesting. I'll definitely go along one day this summer.

I suppose Beano is considered too mainstream, but I'd have thought early issues of Viz would be in there. Ah well.