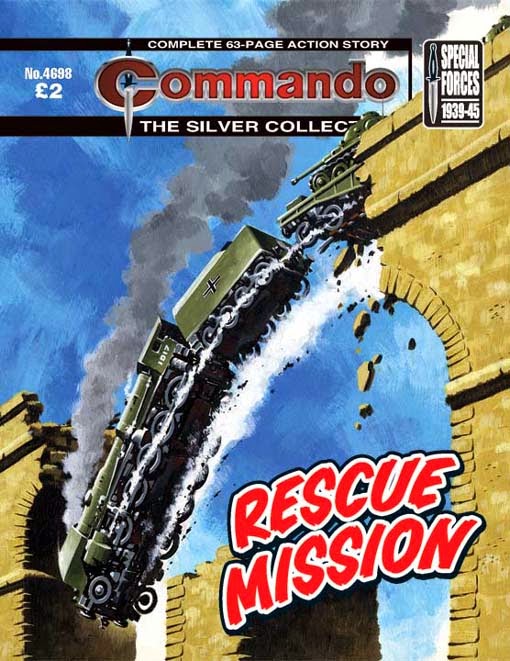 Britain's longest running adventure comic, Commando, has another four issues in the shops this Thursday. Here's the info from DC Thomson...

Commando No 4695 – ANZAC Cove
On the morning of the 28 June 1914 two pistol shots fired in a Sarajevo street would plunge the world into the most destructive war it had ever known as a spider’s web of alliances set Great Power against Great Power.
In the far corners of the British Empire, men flocked to the flag, ready to do their bit in the European war. For the blokes of the Australian and NewZealand Army Corps, though, it wasn't France they ended up in, it was a place called Gallipoli and a particular spot always mentioned when tales of bravery are told...

Mountain men — each one of them — a sergeant, a corporal and a private, all trained for war, but each a highly skilled mountaineer in his own right.
Their difficult and dangerous mission was to find a VIP Brigadier who had been kidnapped by the Germans and hidden high in the Italian mountains before being hustled to Berlin. Within hours the British mountain troops were hot on the trail.
But when men who climb together fall out, when accidents breed suspicion and distrust, every sheer rock face can spell — sudden death!

If there’s one thing that the 63-page format and our style of story-telling allows, it’s plenty of twists and turns in our plots. This one is about mountaineers, so why is there a floatplane on the cover?
A cracking cover it is too. Ken Barr’s use of light and shade to lead the eye to the main characters lifts it from good to great. Inside artist Solbes isn’t found wanting either; the faces in here are full of expression, the figures full of energy and movement.
The explanation for the floatplane? Ah well, you’ll have to read this book to find out. And preferably buy it too!

Somewhere in the Horn Of Africa, three Italian tanks bore down on a single British two-pounder gun. behind that gun's shield were three soldiers who had only every fired an anti-tank gun in practice...foe an emergency.
Well, this was that emergency and those men were not going to back down.
No wonder they called these men...
DESERT HEROES

Nigel Goodman of the Commandos had a big problem on his hands. In fact he had several problems. They were: three Allied generals, one German general, one Russian paratroop major, one major in the US Rangers. Quite a party! And he had to get them all safely to British lines in Italy.
Oh, yes, there was one other thing — he had a large chunk of the German army chasing him as well!

One of Commando’s great strengths is the diversity of its story-telling — although, of course, we’re mainly known for tough, sometimes gritty, war tales. On occasion, however, it can be a welcome change of direction when an author – here veteran scribe Alan Hebden — presents a breathless caper story such as this. The pace just never lets up, rather like a speeding train — which, as you’ll soon see, is entirely appropriate. Featuring wonderful art from Gordon Livingstone and a superb cover from Ian Kennedy, this is one to savour.
Scott Montgomery, Deputy Editor
Rescue Mission, originally Commando No 970 (September 1975), re-issued as No 2300 (August 1989)

I think you may just have answered a question of mine before I asked it, Lew! Is Kennedy the same artist who did so much cover work for Fleetway back in the late 80s? It sure looks like his style but I don't want to assume. I'm thinking of putting something together about a forgotten and short-lived comic he did fantastic covers for so it'd be a real boon to have discovered he's still doing work now and for who! My question was going to be if anyone knew if he was still in the business because he's one of the people I'd like to try to contact.

Yes, that's Ian Kennedy, who has been in the business for decades. (Since the 1950s I believe. I certainly remember his work from the 1960s.) He only does covers now but he used to produce a lot of strips years ago.