Review: This Was The Wizard 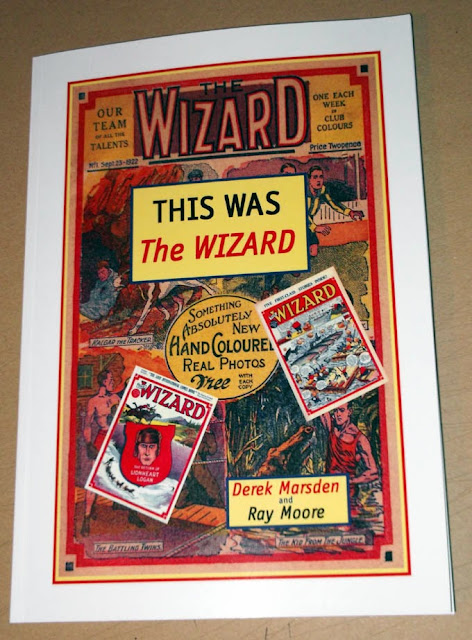 British comics took a long time to settle into the format of all-strip content that most of us remember. For the first few decades of the 20th Century, the traditional comics (or 'papers' as they were often called in Britain) were half prose stories, half comic strips. Then of course there were the 'story papers' that contained all prose stories, and which happily continued on their parallel timeline of popularity alongside the comic papers for many years. One of the fondest remembered of those story papers was The Wizard, and this week a new book was published charting its 41 year history.

This Was The Wizard is a splendid 254 page volume written by Derek Marsden and Ray Moore, whose names many of you will recognize. Ray Moore has authored various articles and books on British comics including The Beano Diaries, and Derek Marsden is the author of Free Gifts in the Big Five, which I reviewed here two years ago. This new book covers the entire history of The Wizard in its original incarnation as a story paper (1922 to 1963), but not the later comic version launched in 1970.

Having read material by Derek and Ray before I know that both authors know their stuff. This Was The Wizard is a book that's solidly packed with information and I would say is the definitive work on the popular story paper. Derek has a very precise and thorough writing style, presumably developed by his years as a teacher, and his history of The Wizard goes into great detail about the stories and characters. This is also combined with well researched background information about the comic and its development over the years. 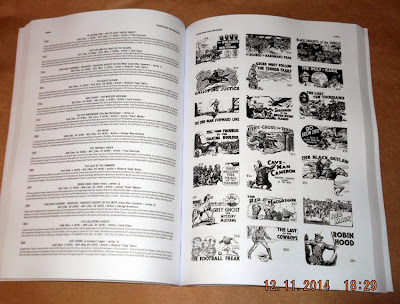 The main portion of the book is a listing of every story, with a short synopsis, the length of its run, and the name of its artist. This list is accompanied by a small reproduction of the art and logo used in the header of each serial/story. These images are very small but the quality of the reproduction is so high that the detail is still clear to see. Story titles such as Kashgar the Terrible, The Waxworks of Secrets and Shivers, The Staring Eyes, and The Voice on the Wire hint at how exciting those prose stories must have been for the boys who devoured them every week. 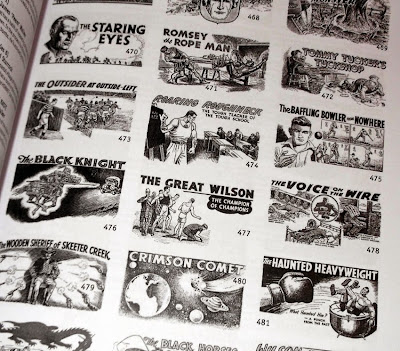 The creators of those stories aren't ignored of course. The book also provides biographical details of many of them, including photographs taken in the D.C. Thomson offices decades ago. So thorough is the book that there's even a floor plan of the art department, showing where the staff were situated!

There are some nice colour sections too. One features a gallery of selected Wizard covers. Again, the images are small (12 covers to a page) but they give us a good idea of the range of covers and their approach in attracting their readership. 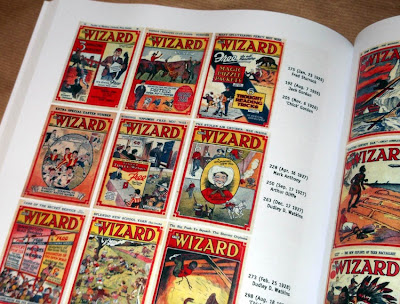 Another colour section reprints pages from the flyers that promoted various free gift issues of The Wizard over the years. These flyers were marvellously designed by the Thomson art department and made the gifts seem very compelling. 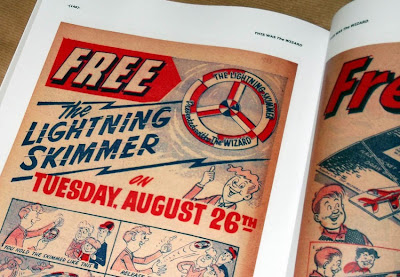 The third colour section shows photographs of the free gifts that the paper carried over the years. Far more interesting items than the plastic foam bullet shooters and suchlike given in comics today. 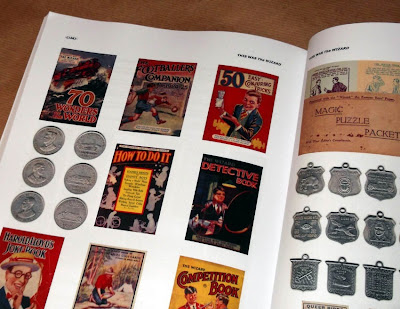 Although primarily a text story paper, The Wizard did feature a few short humour strips at times, and some of those are reproduced in the book.

There's also a listing of The Wizard Annuals and their contents. As I said earlier in this review, This Was The Wizard is the definitive book on its subject and covers everything one could know about the paper. Derek Marsden and Ray Moore have really worked long and hard on this volume and their dedication should be appreciated. I knew very little about The Wizard before reading this book so it's been an entertaining education, which is what the history of comics and story papers should be about.

This Was The Wizard costs £25 and can be ordered from any bookshop worldwide by quoting ISBN 978-0955197819. It will be on sale at 30th Century Comics in Putney, from Sunday, and at Border Bookshop in Todmorden, Lancashire, from Friday November 21st. 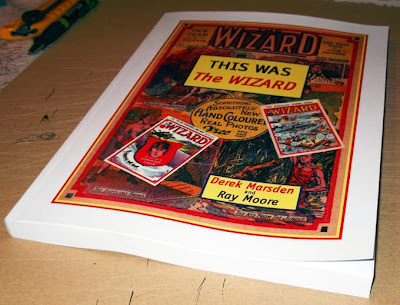 Yet ANOTHER brilliant book to go on my list! I don't remember much about The Wizard. Looks like I have missed out!

I was only four when it folded so I definitely missed out, but I have a couple of issues I've bought in recent years. Text story papers aren't really my cup of tea but I find the history of them interesting.

This post has reminded me that DC Thomson also published some text papers for the ladies as well, including Red Star and Red Letter weeklies. I had completely forgotten all anout them. Have you got any covers to scan?

I haven't, but I'm sure there must be a website out there somewhere that'll have a few. Some people must collect them.

My mum used to tell me that my grandma bought Red Letter every week. This would have been the 1930s. (Sadly I never knew my gran as she died before I was born.)

Here's some, albeit small covers:


There's still a My Weekly story paper on sale, although it's just one story per issue and digest size. My Weekly Pocket Novel is the title.

I suppose The People's Friend is the closest thing left to a Thomson story paper.

Thanks for the link, Lew. I would never have found that. The attractive thing about these papers is that they LOOK like DC Th comics!

I had been googling " DC thomson's text/prose papers/magazines for girls/ladies " and kept going round in circles, so I confess I thought, " I know - I'll ask Lew!"
By the way, they had a few Red Star Weeklies on there as well, so thanks again!

It was probably easier for me because you'd already mentioned Red Letter, so I think I Googled "Red Letter" + "story paper" + "Thomson".

As I had roped you into my research, I thought I'd let you know that further digging has unearthed a further 2 comic-style DC Th story papers.- Family Star and Secrets. I wonder if there were any more?

DC Thomson seemed to like categories of five titles so there probably was another. There was a short-lived one called Bluebird in the 1920s. I don't know if another title replaced that later.

According to Comics UK, the Blue Bird merged into My Weekly. I can't find any images though. And they don't mention any other titles.

There's a Blue Bird cover on my blog, - a photo I took of Derek Marsden's previous book when I reviewed it:

*appear* I did a review of a few issues of My Weekly Pocket Novel here:
http://blog.crystal-knights.co.uk/2014/10/27/midwife-maudie/
They seem to have several "series" running irregularly, as well as "one off" stories. Another series called Moonstones recently started, which looks good. Detectives mixed with witchcraft!

That story paper did actually divide into four seperate ones a year or so ago, one for crime, one for romance, one for "horror" and, erm, another one. But they were quickly merged back into a single publication.

There's also a People's Friend Library, which is very similar, but aimed at an even older audience (though they're both for the over-50's). The People's Friend also recently published a World War 1 "bookazine" which is worth a look, it has a few reproduced stories, too.

How could I forget that lovely swastika charm? I wouldn't care, but I was only re-reading " free gifts in the big 5" LAST WEEK, but the title never entered my memory.
Thanks for putting me straight!!

Thanks for all that info. and the link, Mike. I didn't know any of this!

Yes thanks Mike. It's always good to learn more about the history of story papers and comics.