I said in my previous post that this blog would be staying in 1964 for the duration of Christmas and the reason is to have a look back at The Dandy Book that I had on Christmas Day 1964.

This is the earliest Christmas I can remember, and I have very clear, fond memories of receiving this, my very first annual. I was five years old and in my pillowcase was this marvelous book along with other presents such as a Supercar toy (see here) and a Chad Valley See-A-Show (see here). I'd been a regular reader of The Dandy weekly throughout 1964 but to my young eyes this was something really special; a thick hardback book full of my favourite strips. I was immediately hooked!

I couldn't wait to get stuck into the book, and I read the first story in bed before I got up. A one-off adventure strip called Diamond Dick. (No giggling at the back there.) Artwork by Paddy Brennan. 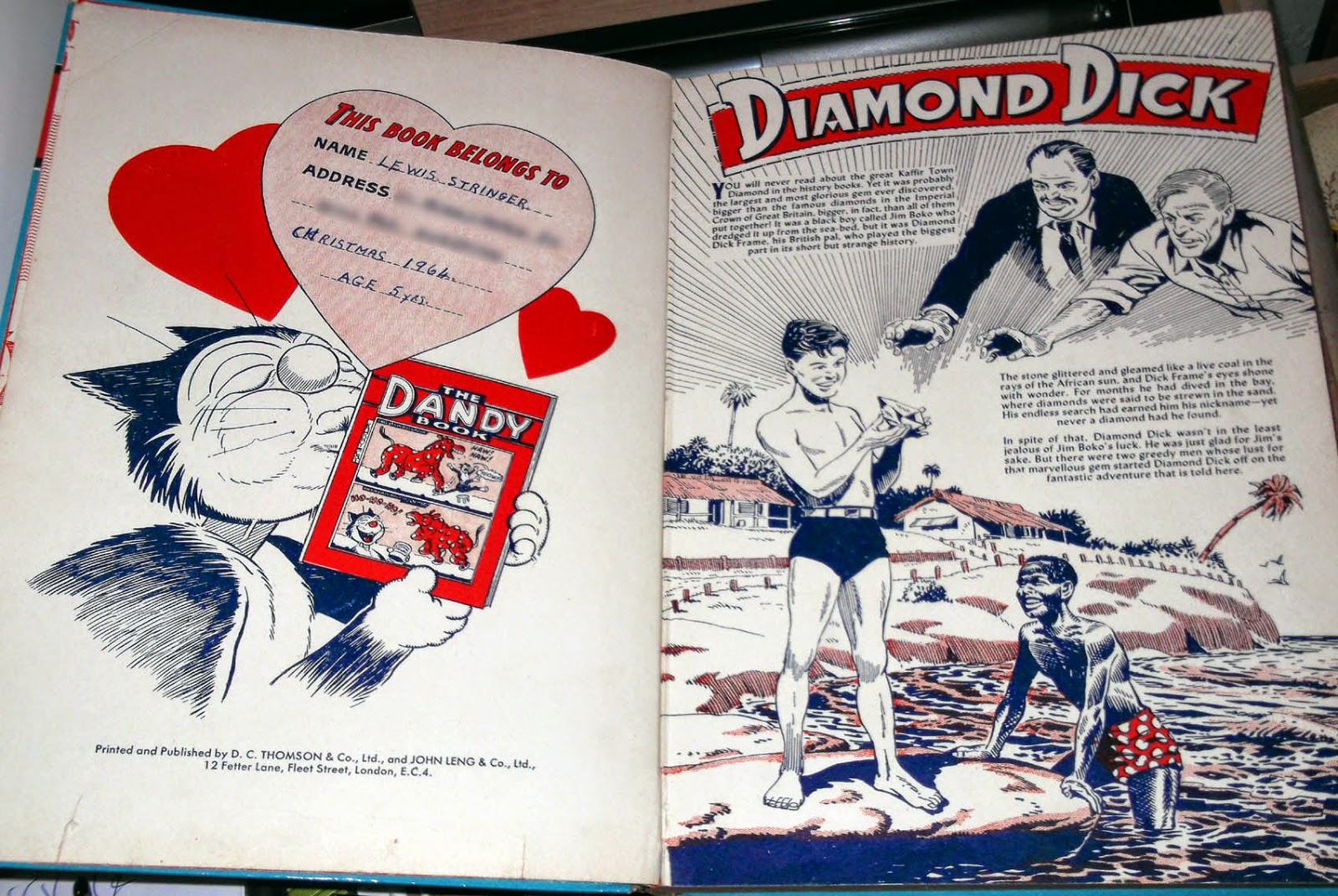 This story of diamond thieves in South Africa fascinated me and I still remember the excitement of reading these two pages with the hero hiding in the crook's car... 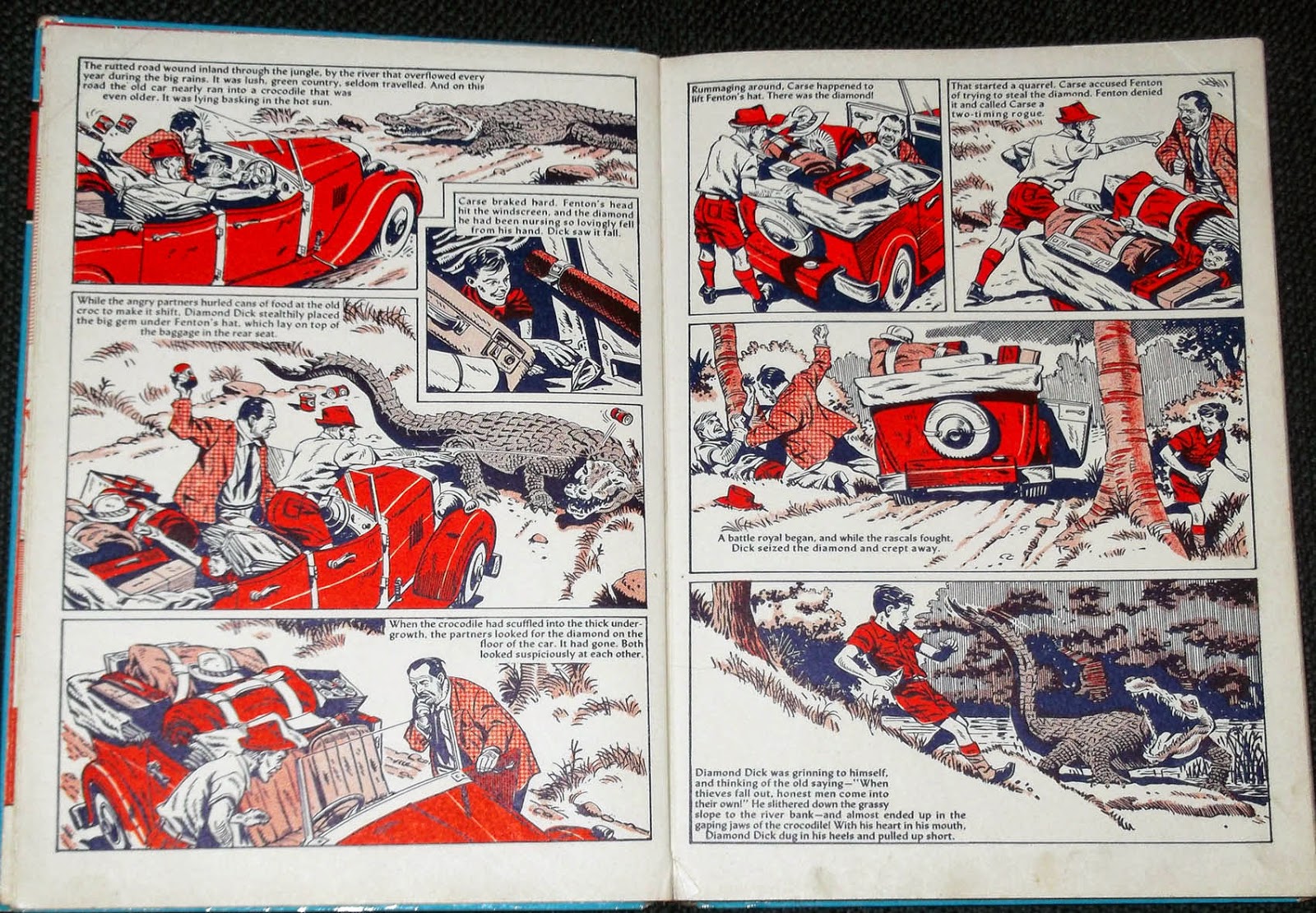 Then, a few pages on, suddenly a fantastic double-page spread. What an impact! I'd never seen this technique used in comics before and the great thing was that this book used the two-page spread in several stories as we'll see. 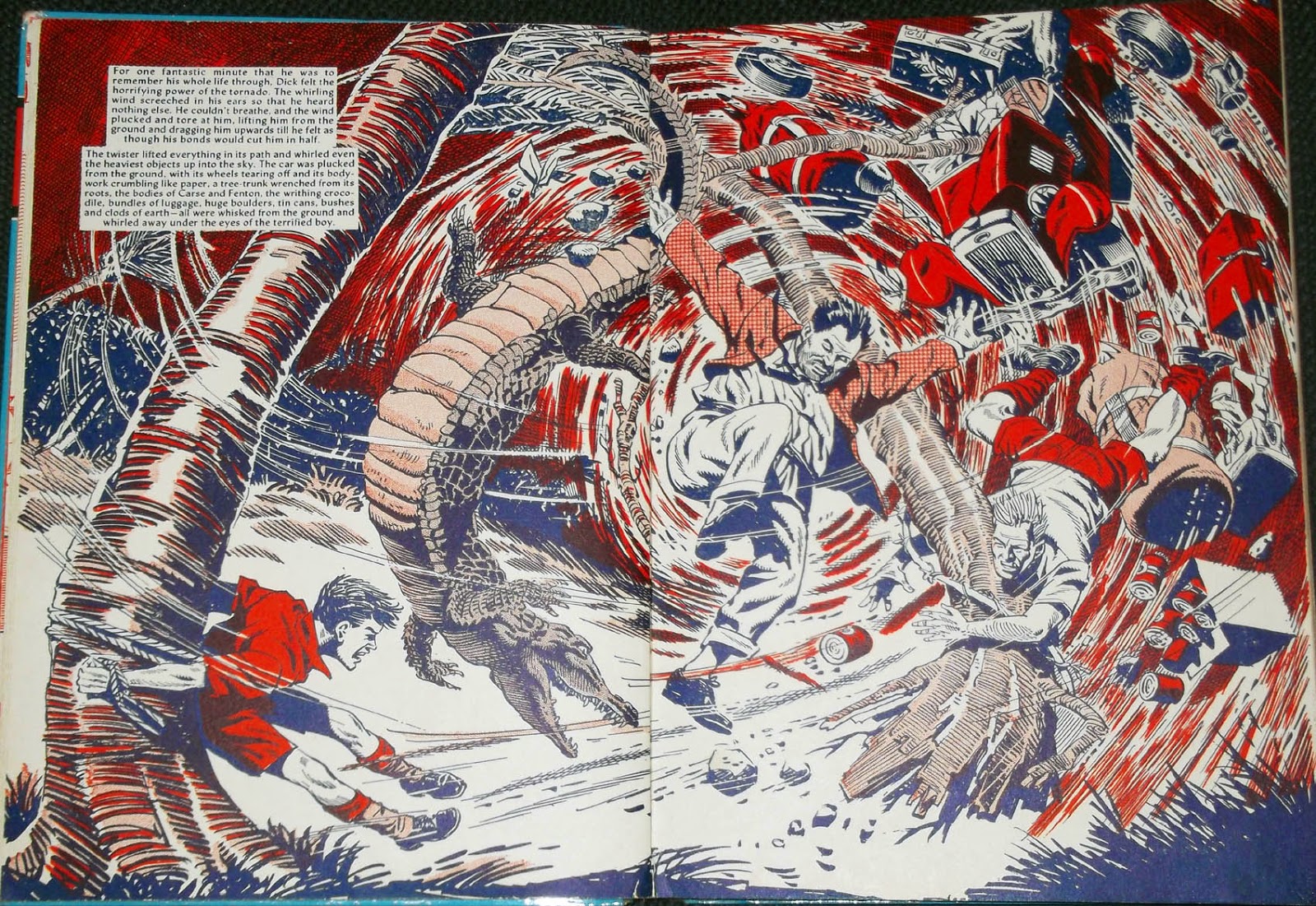 The book contained all the Dandy regulars plus a few new faces. For years I thought The Beetles was by Leo Baxendale, but it's actually an excellent imitation of Leo's style by Ron Spencer. (George Martin's Sunny Boy on the facing page.) 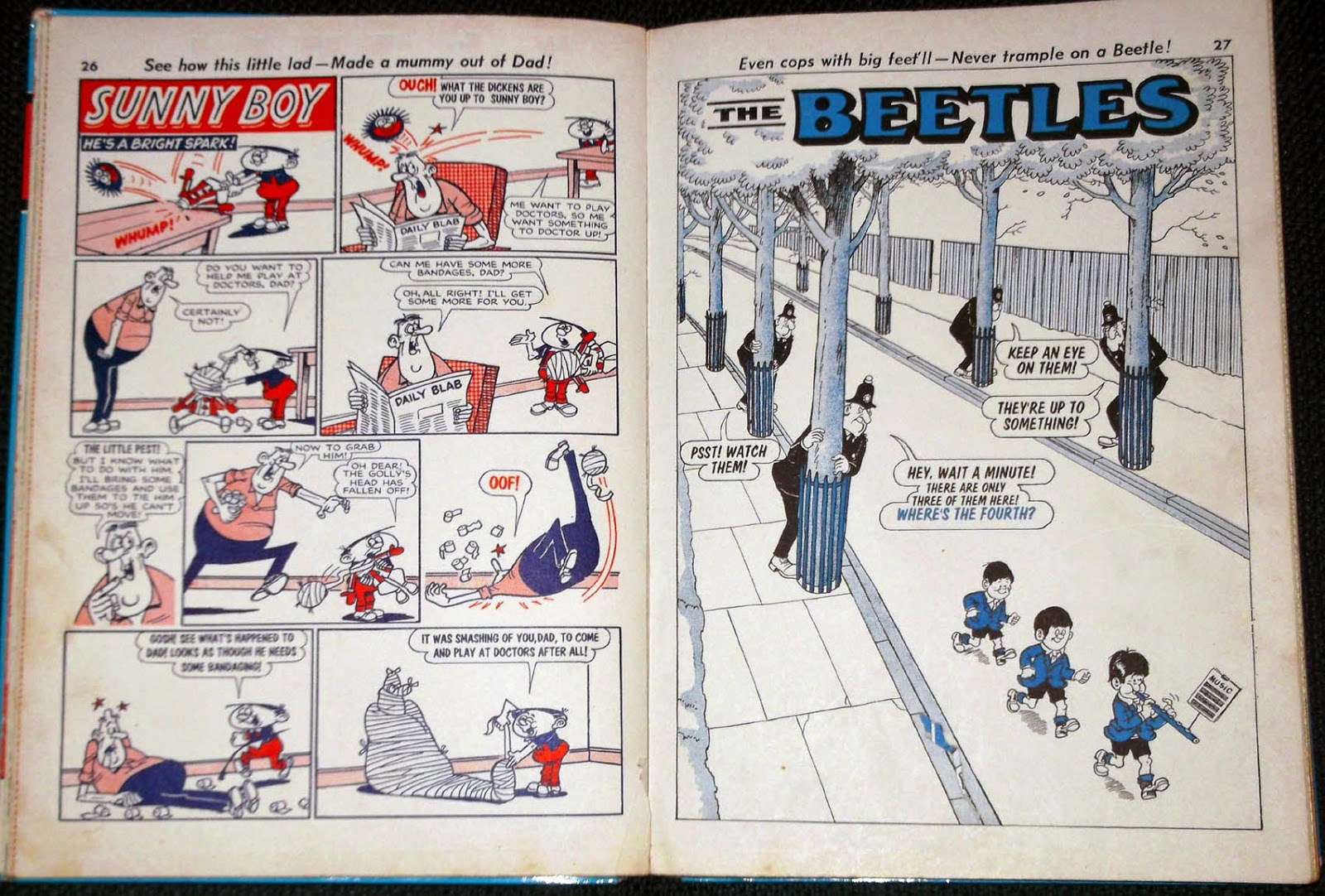 Another feature that had an impact on me was The Nine Faces of Korky by Charlie Grigg. This 'Nine Faces' idea was used for several characters in this annual and was a uniquely entertaining way to tell a story and to show good cartoon expressions. Here's another; The Nine Faces of Desperate Dan, by Dudley Watkins... The brilliant Ken Reid had several Big Head and Thick Head pages in this annual. Here's one of them, with the pair receiving a battering as usual. Ken was a master of comic violence in strips. And yes, the green spot colour really is that bright in the actual book! As I said, the double-page spread cropped up in several stories and used very effectively. Here, halfway through a Winker Watson story by Eric Roberts... 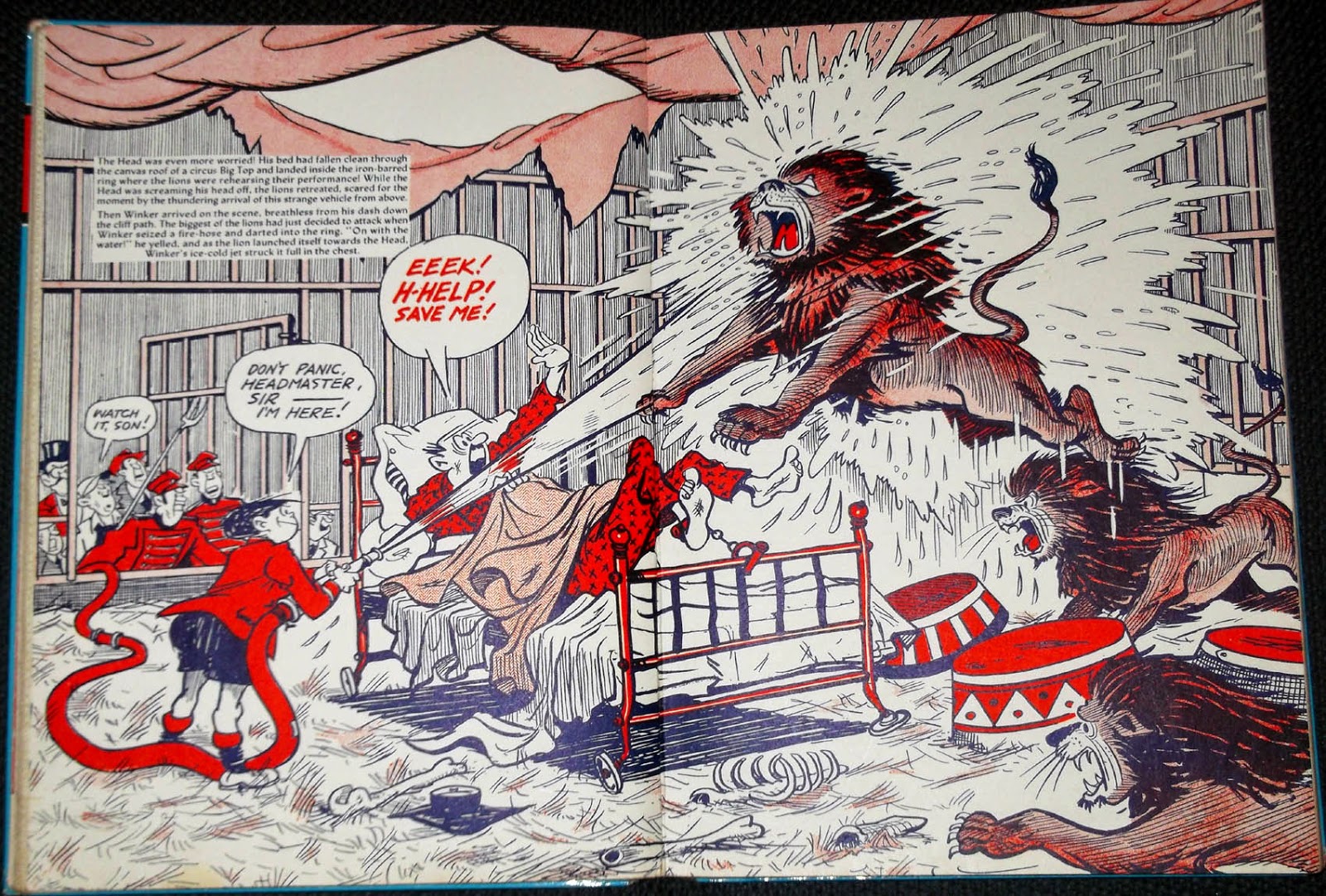 Another spread in a Rocket Jock story by Charlie Grigg... 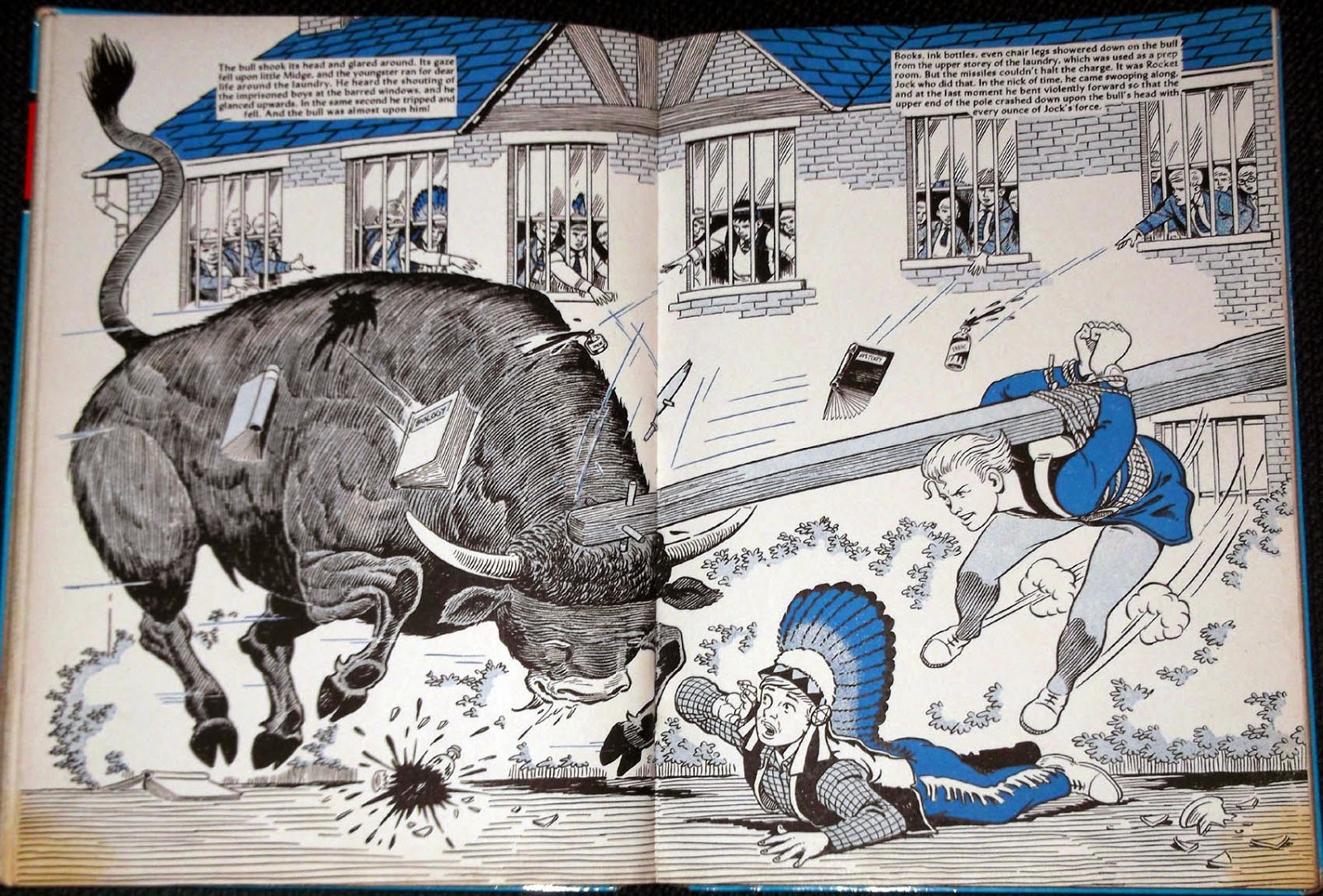 ...and at the start of Joe White and the Seven Dwarfs by Bill Holroyd. I remember laughing out loud at this 50 years ago! Holroyd was a fantastic artist (and I understand he was Ken Reid's brother-in-law). 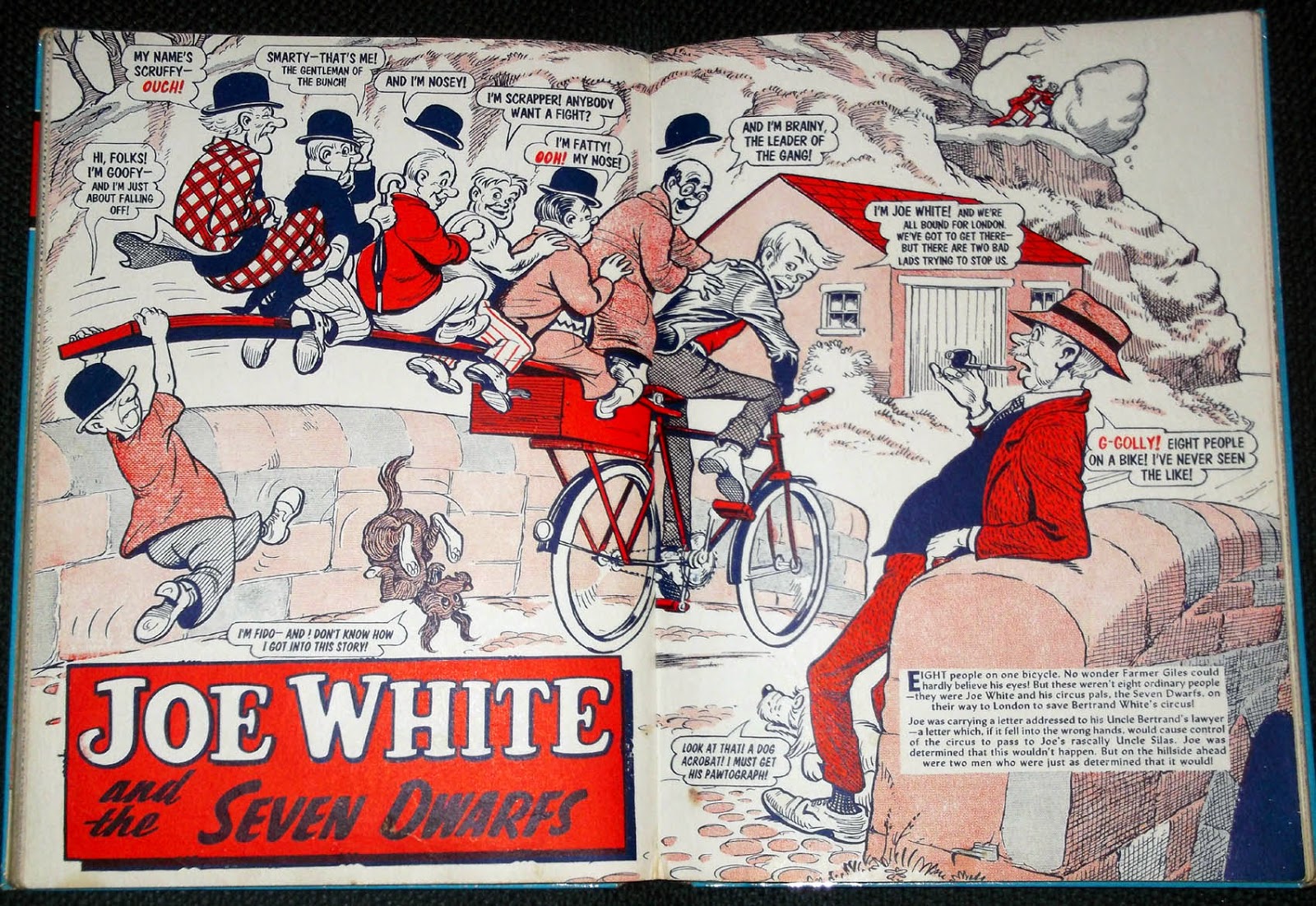 One of the many things I liked about The Dandy back then was that it featured adventure stories as well as humour. One of the most dramatic was The Crimson Ball, a giant indestructible metal ball controlled by a foreign spy (who lived inside it) intent on destroying British aircraft! Art by Jack Glass. 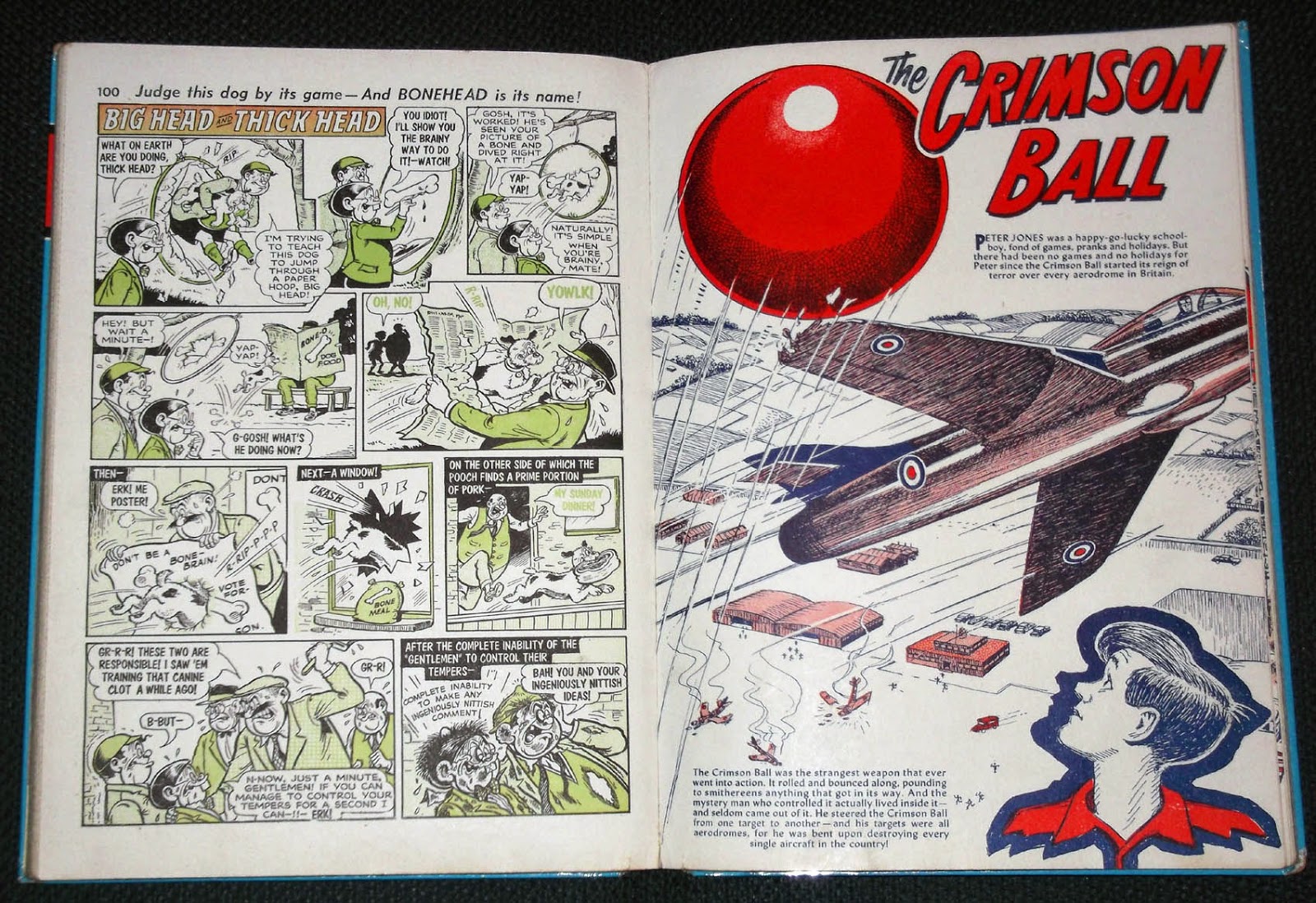 My favourite Dandy adventure strip was The Red Wrecker, - powerful fast growing weeds springing up and destroying anything in their way. In The Dandy Book it was destruction on a grand scale, and Charlie Grigg really outdid himself with this spread... 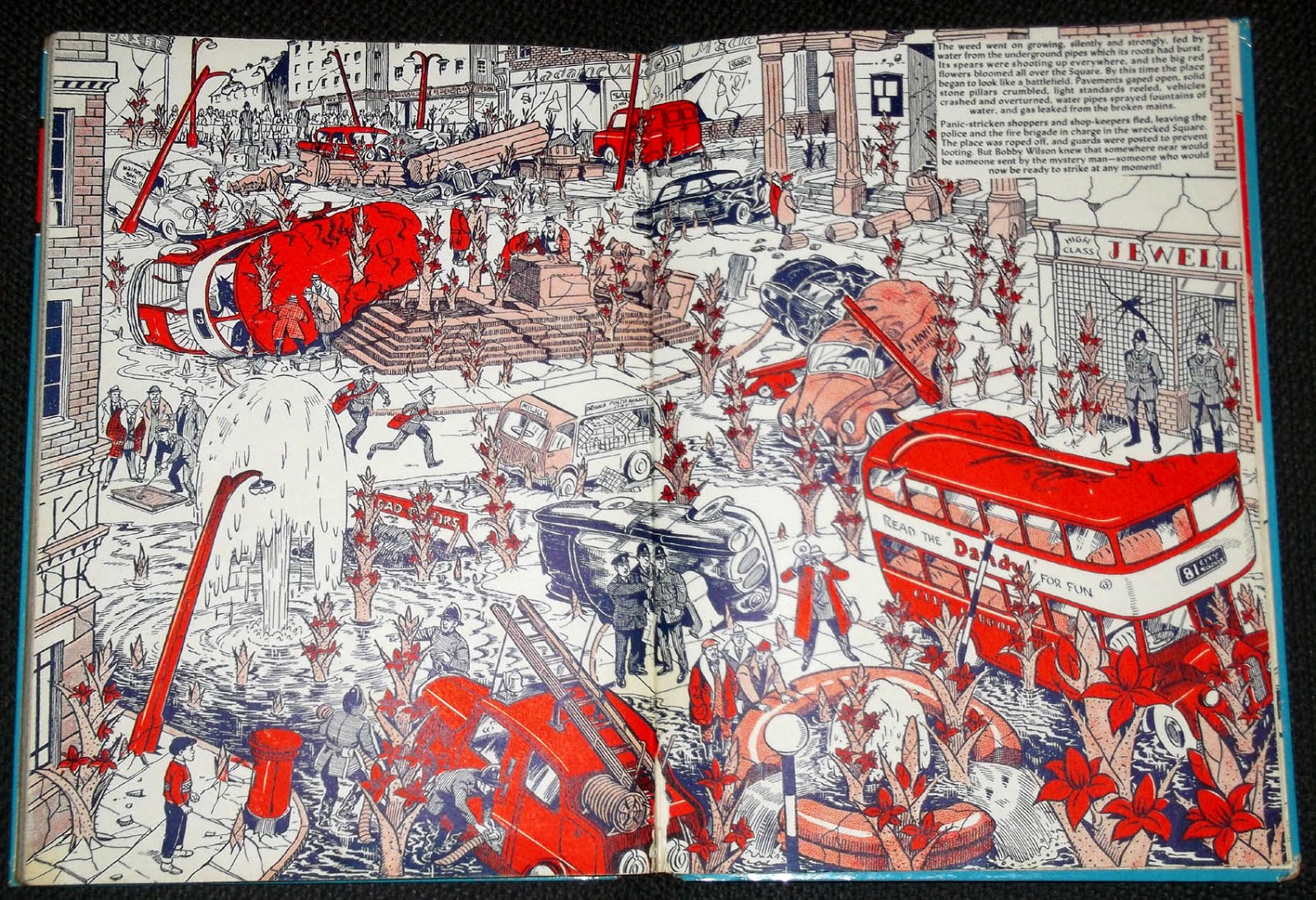 Time for one more 'Nine Faces' and here's The Nine Faces of Thick Head by Ken Reid... 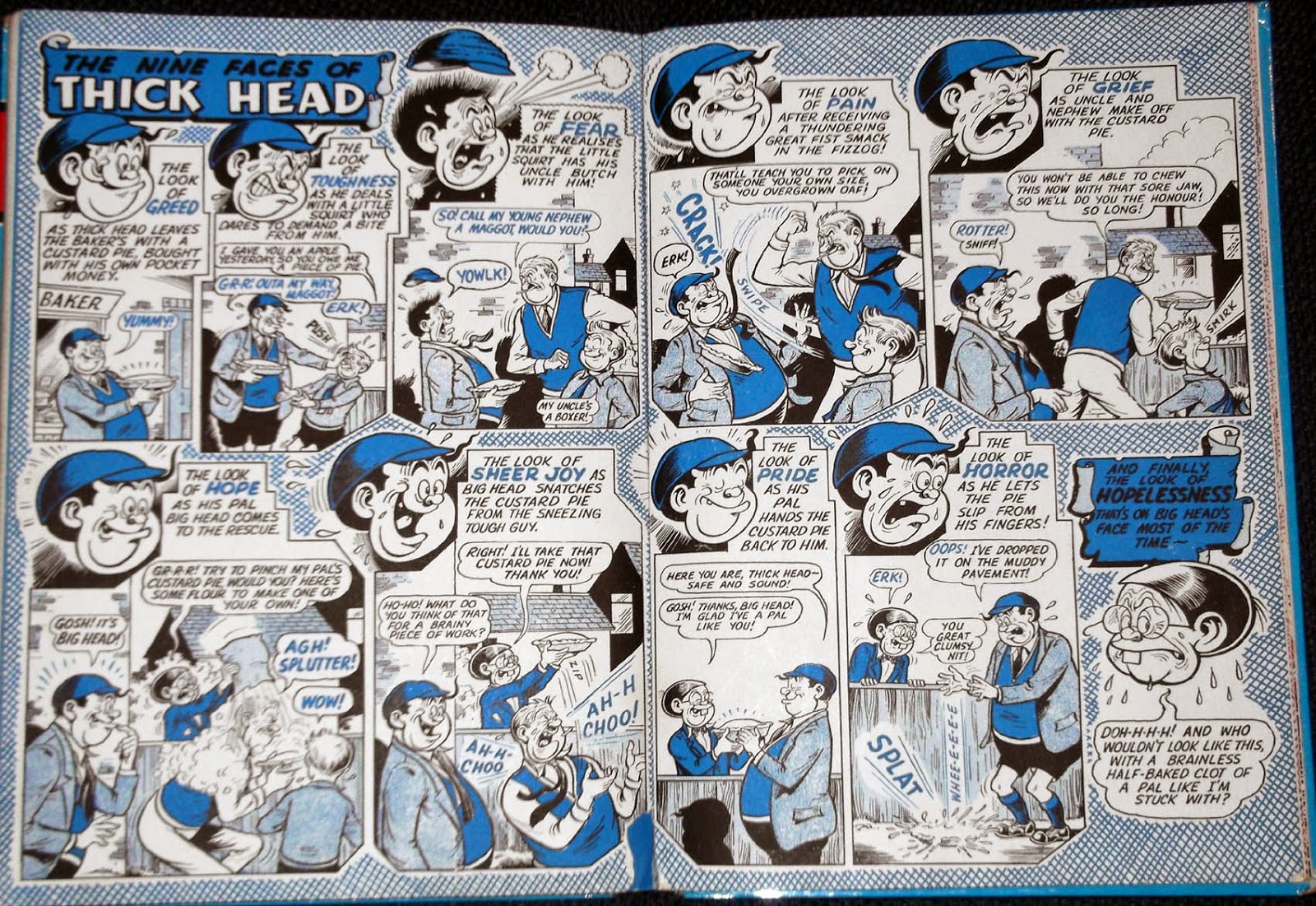 Finally, on the back cover of the book, a full colour Desperate Dan strip by Dudley Watkins, with a punchline that still amuses me to this day. 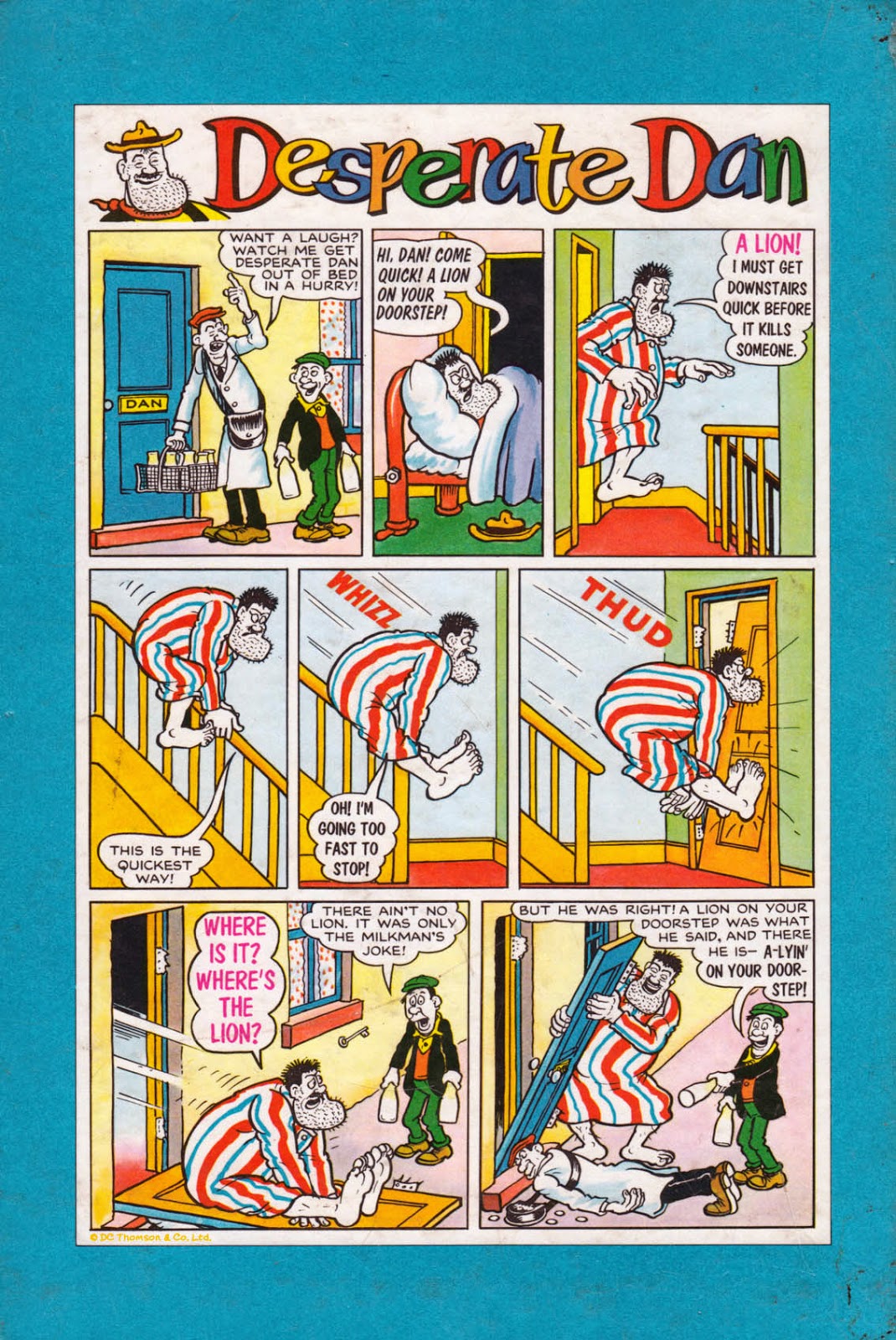 All of the scans and photos in this post are taken from that very book I had 50 years ago today. A Christmas of happier and more optimistic times. The lad I was back then could never have imagined he'd be creating strips in The Dandy Annual 2015, and I can hardly believe it myself some days. I hope that some of today's children who are unwrapping their first Dandy Annual today will get similar enjoyment out of it as I did from the one my mum bought me half a century ago. Whether or not they'll be writing about it in 50 years time I'll never know, but I'd like to think so.

I prepared this post a few days ago, scheduling it to go live on Christmas Day, so if you're reading it on December 25th thanks for dropping by and I hope you're having a good day! Merry Christmas!

A few more festive flashbacks of annuals from long ago, from older blog posts of mine:

Happy Christmas Lew
The very best of the season, and yes somewhere a kid is thrilled with their Dandy Annual and will start a lifetime of love of cartoon art

Thanks. A Merry Christmas to you too, folks.

Hope you have a good Christmas Lew its always good to re visit these times and re live some of those wonderful memories and people at this time even if it is only for a split second.

I can't recall my first annual (although it could be the 1966 Beezer annual) and although this looks familiar I'm not sure I got this as a kid but what an annual the art is amazing - Christmas day was always great as a kid and whilst I loved toys seeing a pile of annuals nicely wrapped up was always the main thing for me - I was lucky I had an older brother so we always got a good pile of annuals between us and my grans would give us the Broons or Oor Wullie at Hogmanay.

I used to prefer IPC / Fleetway weekly comics (with a few exceptions ie Dandy, Odhams books, The Beezer) as a kid but when it came to annuals DCT always had a great product and the Dandy at this time was my favourite - there doesn't seem to be an average page in this annual its all top drawer stuff.

Annuals can be a great reminder of happy Christmases long ago. Here's a few more from older blog posts of mine that you may have missed:

What a lovely Christmas Day blog. This book's a bit early for me, the ones I remember are late 60s.
I've browsed through some when finding them in second hand bookshops and don't know if it's my imagination, but they never seem to feature much of the original artists. Would that have been normal practice? Seemed to be the same with summer specials. This Dandy book is fantastic with all the DC Thomson big guns. They've brought out facsimile editions before. Wish they'd do that with this one.
Merry Christmas Lew.

DC Thomson tended to use the same artists in the annuals as in the weeklies, so all the strips in this book are by the original artists.

It was Fleetway / IPC who often used other artists to ghost a strip. I suspect it was because their page rates were lower on the annuals than on the weekly comics and perhaps some of the regular artists weren't willing to work for a lower rate.

That was actually beneficial for newcomers as IPC would sometimes try out new artists on the annuals. My first work for that company was drawing a Scooper strip for a Jackpot Annual, followed a year later with a Bookworm story.

Thanks for commenting Colin. All the best for Christmas.

I just noticed your name written in the "This book belongs to" section - that made me smile. I must admit when I sometimes pick up an old annual and see the kids name written inside it I feel strange owning it as if they were anything like me an annual was a major part of my childhood (plus there's alwayS the thought where is that person now)

Yes, my mum wrote my name and address in there, and in other annuals the following year. I filled it in myself on some but stopped after a few years. Those pages were a nice special touch I think.

I keep coming back to this post as I'm unsure if I actually had this annual or not. If there was a 2 page spread of Desperate Dan with bent lamposts and burst water mains , then I did.
Like Paul, I can't remember my first annual, but it could have been between Zorro, TV Play Land or Roy Rogers.
In the early 60's I found a few DC Th annuals in my pillow case, including the Beezer every year. I actually learnt to read with this book. I can still remember the smell as you open the book!

That was in the following year's book I think, John. Not in this one anyway.

Cheers Lew, I think I'll look for a copy of that on eBay.