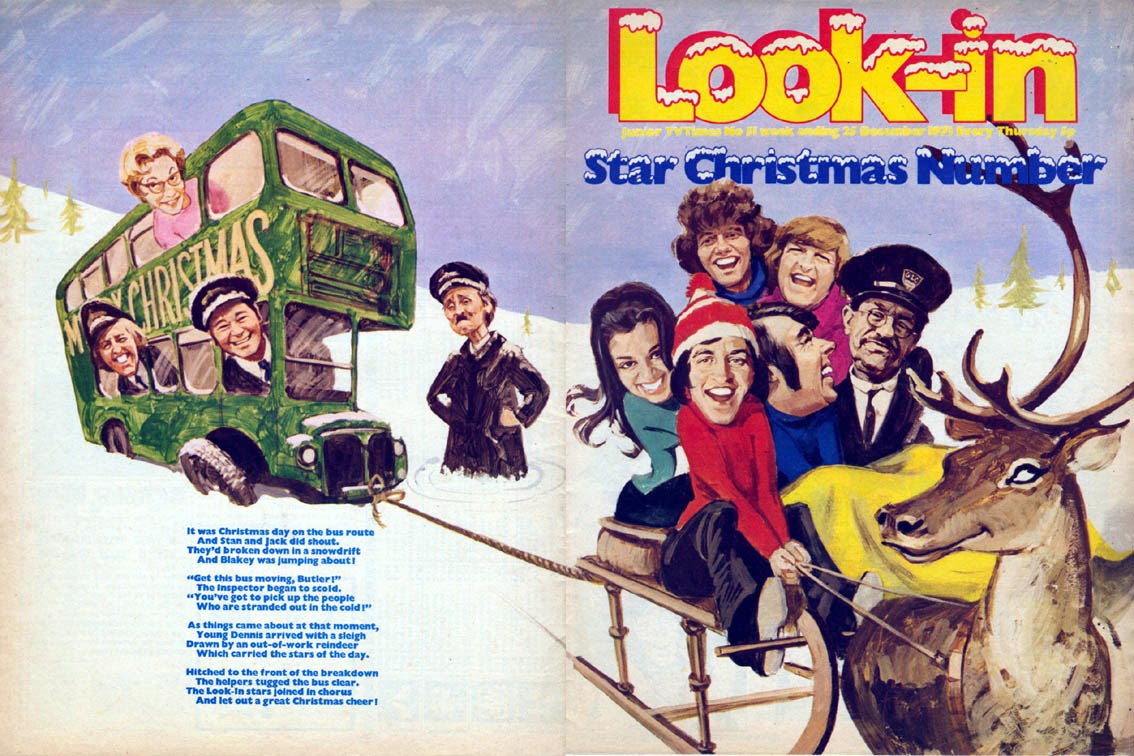 Kicking off a short series of festive blog posts, here are a few pages from the first Christmas issue of Look-In, dated 25th December 1971. (Click on images to see them larger.) Dubbed the 'Junior TV Times', Look-In was published by Independent Television Publications Ltd (as was the TV Times then) and featured strips based on popular ITV shows. The wraparound cover above is by Arnaldo Putzu, who was the comic's regular cover artist and an illustrator of film posters of the day.

The comic's 24 pages contained a variety of humour and adventure strips but it's only the humour strips I'm showing here as the adventure serials didn't have a festive theme. First up, here's Crowther in Trouble, featuring ex-BBC Crackerjack star Leslie Crowther, drawn by the prolific Tom Kerr... 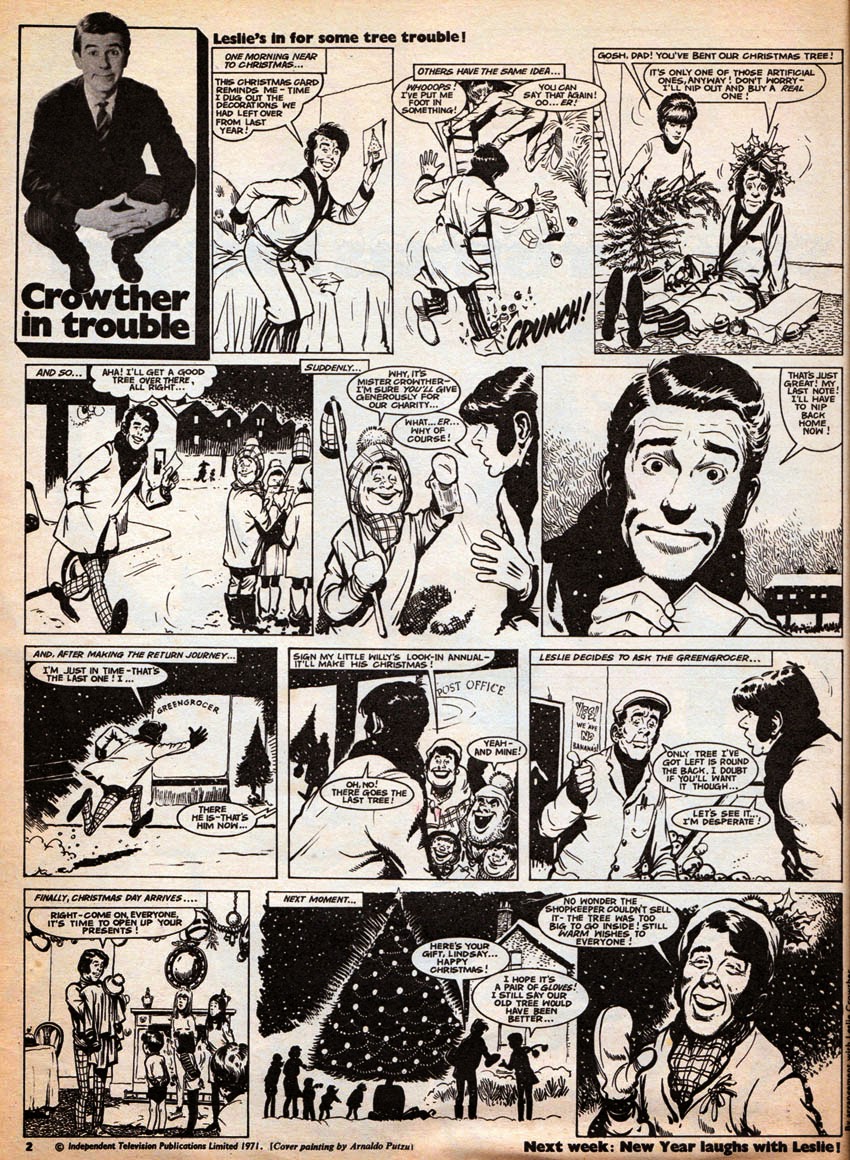 Please Sir! was a popular comedy series and to me seemed to be a mixture of the movie To Sir With Love and The Beano's Bash Street Kids! The strip in Look-In was drawn by the versatile Graham Allen... 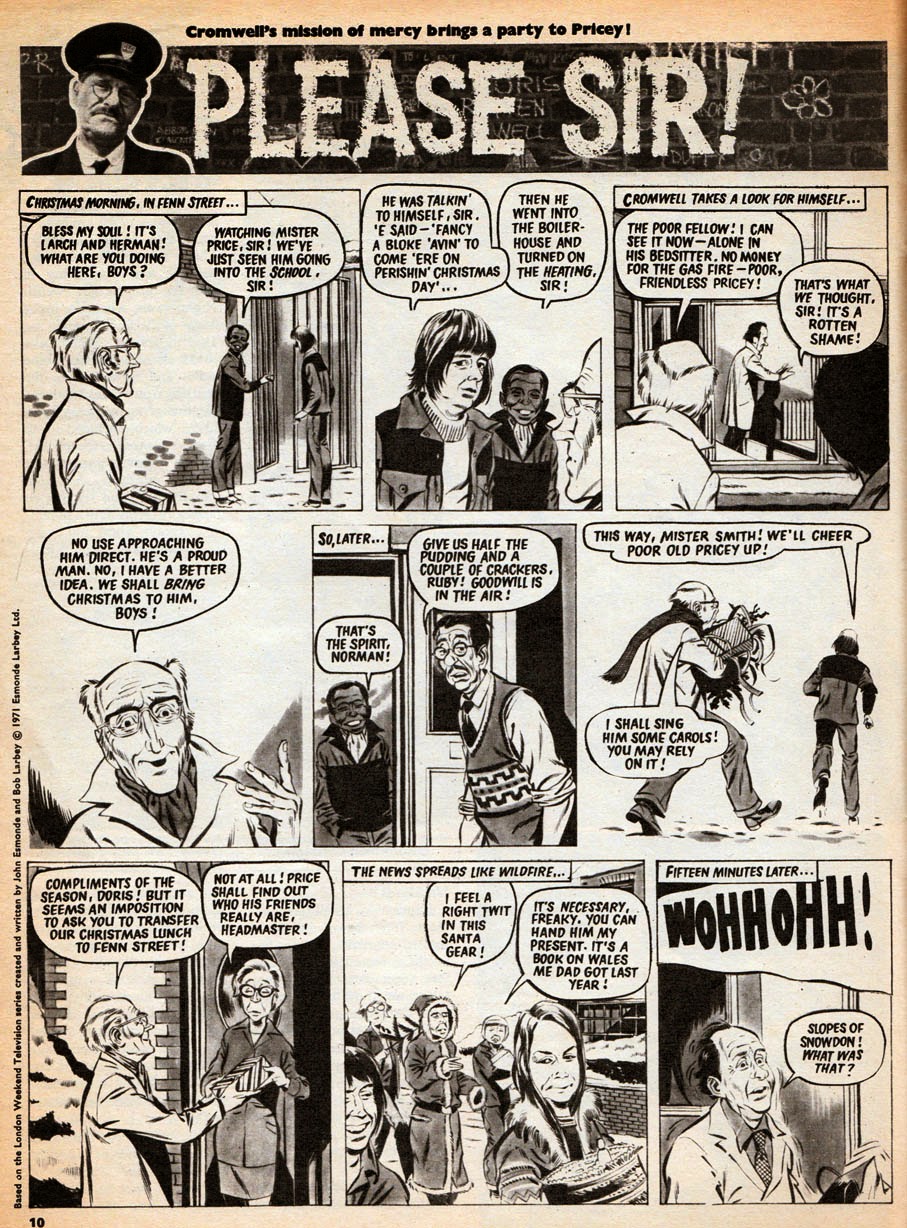 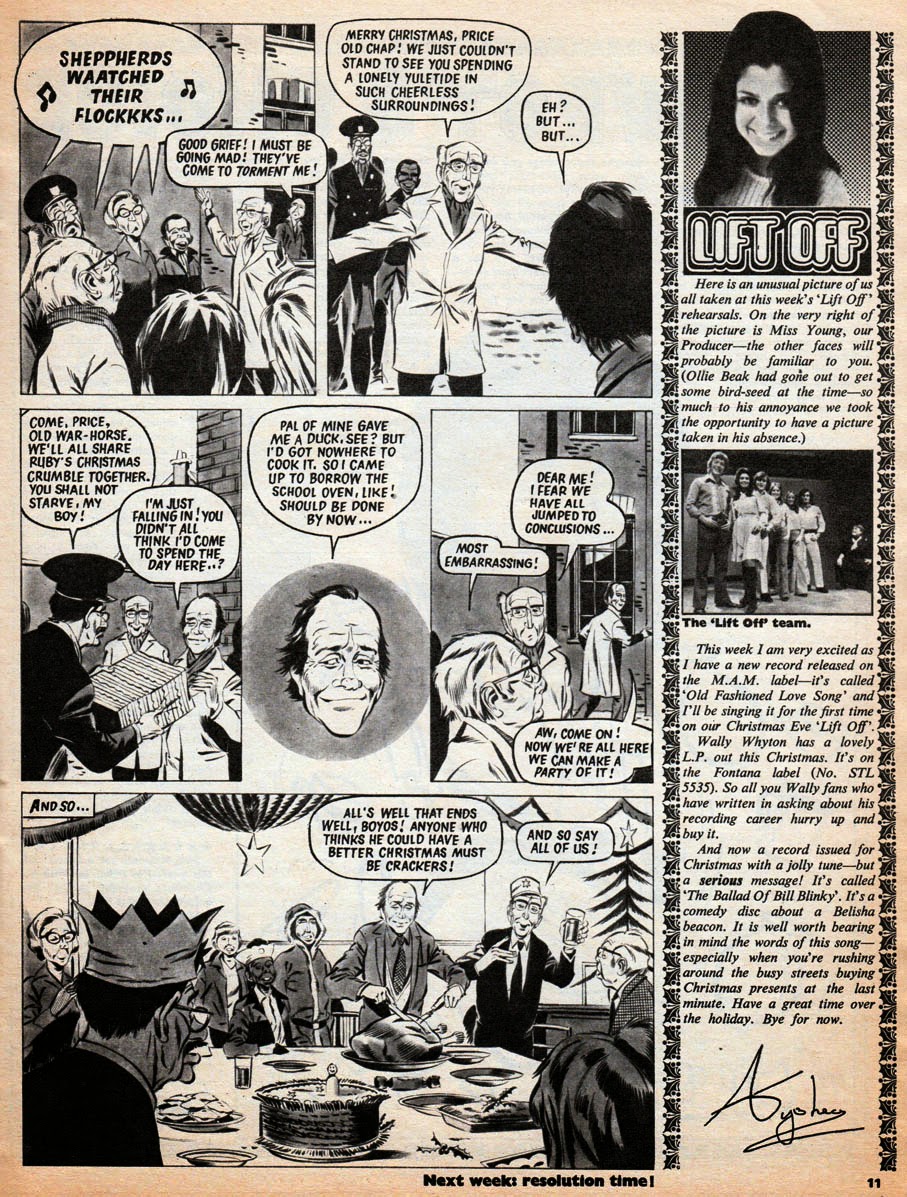 A spin-off from Please Sir! was the TV series The Fenn Street Gang, about Class 5C's adventures after leaving school, featuring the actors who could no longer convincingly play 15 year olds. Artwork for the strip by that man Tom Kerr again, a familiar artist of seventies comics... 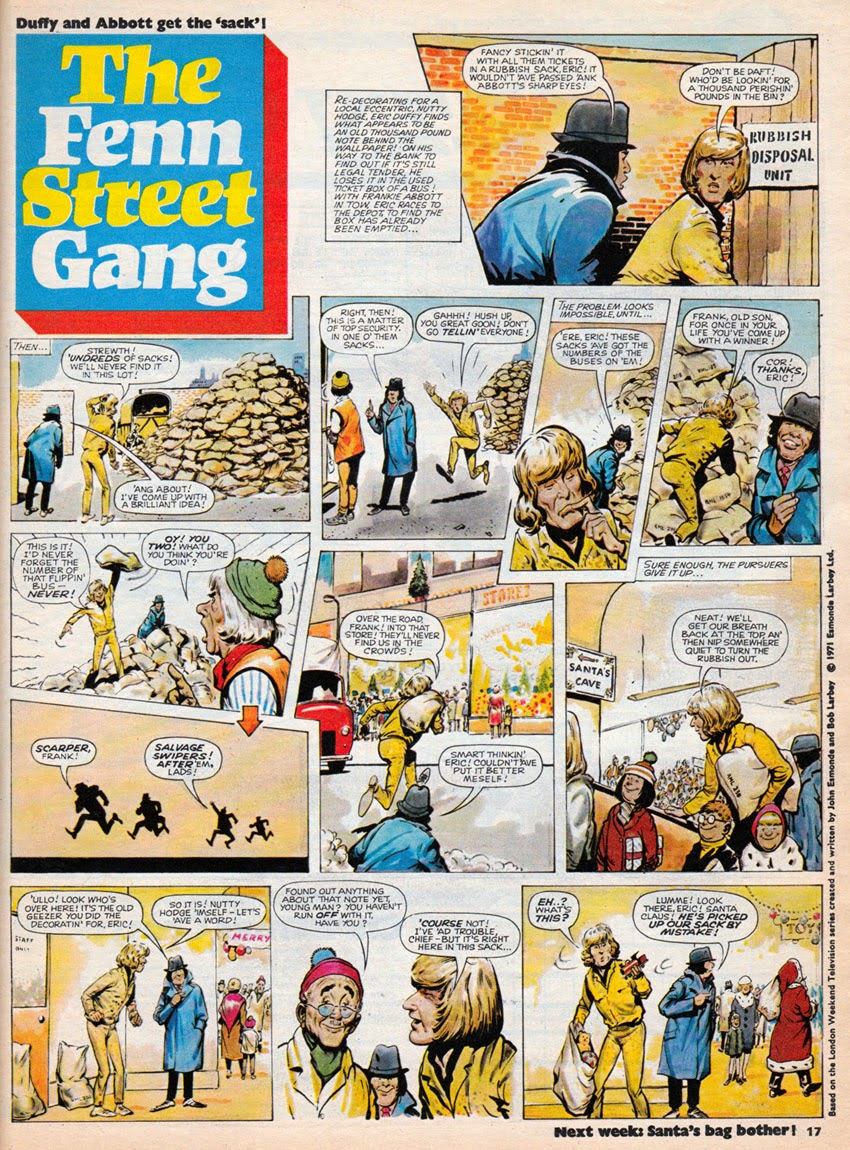 The strip version of On the Buses was drawn by Harry North, an excellent artist, although Olive's reaction to being blasted in the face by a shower in the last panel seems oddly static. 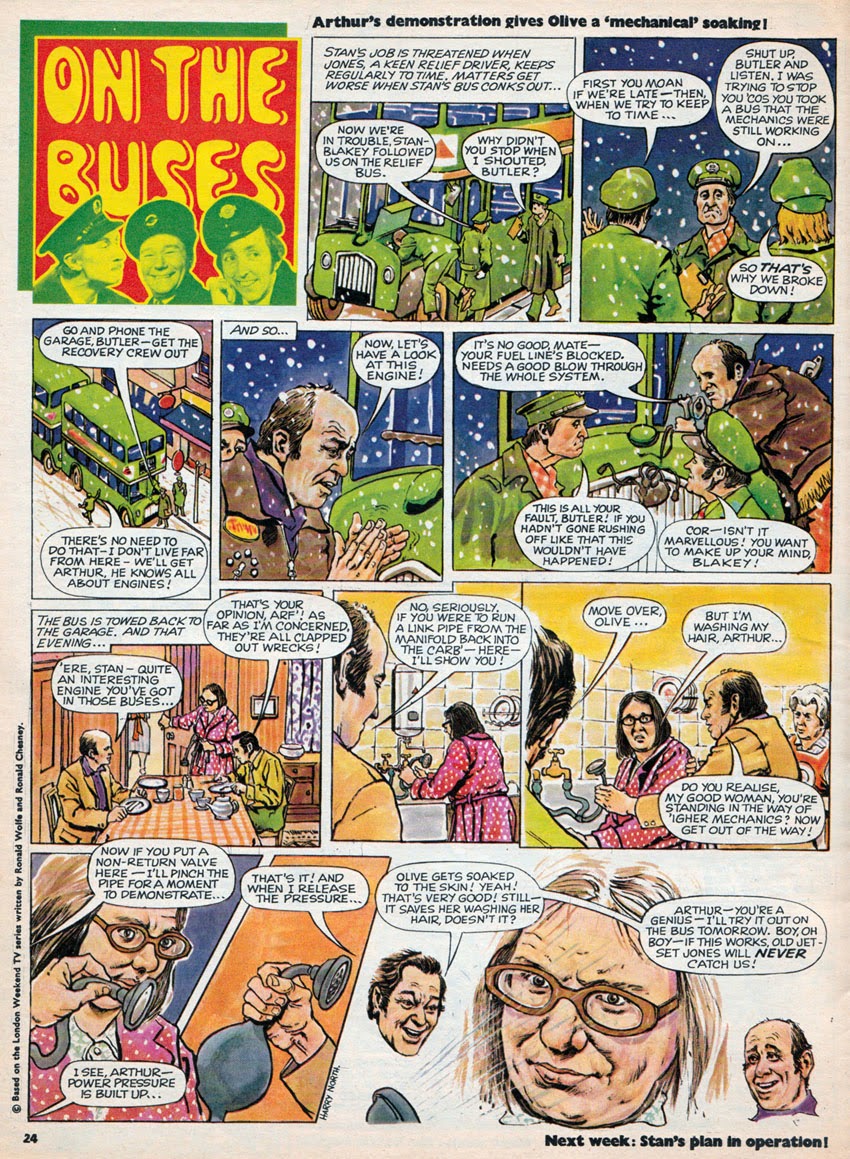 Look-In also carried several feature pages. Curious as to what was on TV back then? Here's a selection of ITV highlights for Christmas 1971. I seem to remember watching the Mike and Bernie Winters All Star Christmas Comedy Carnival which contained new mini-episodes of various comedy series (a bit like Children In Need does now). 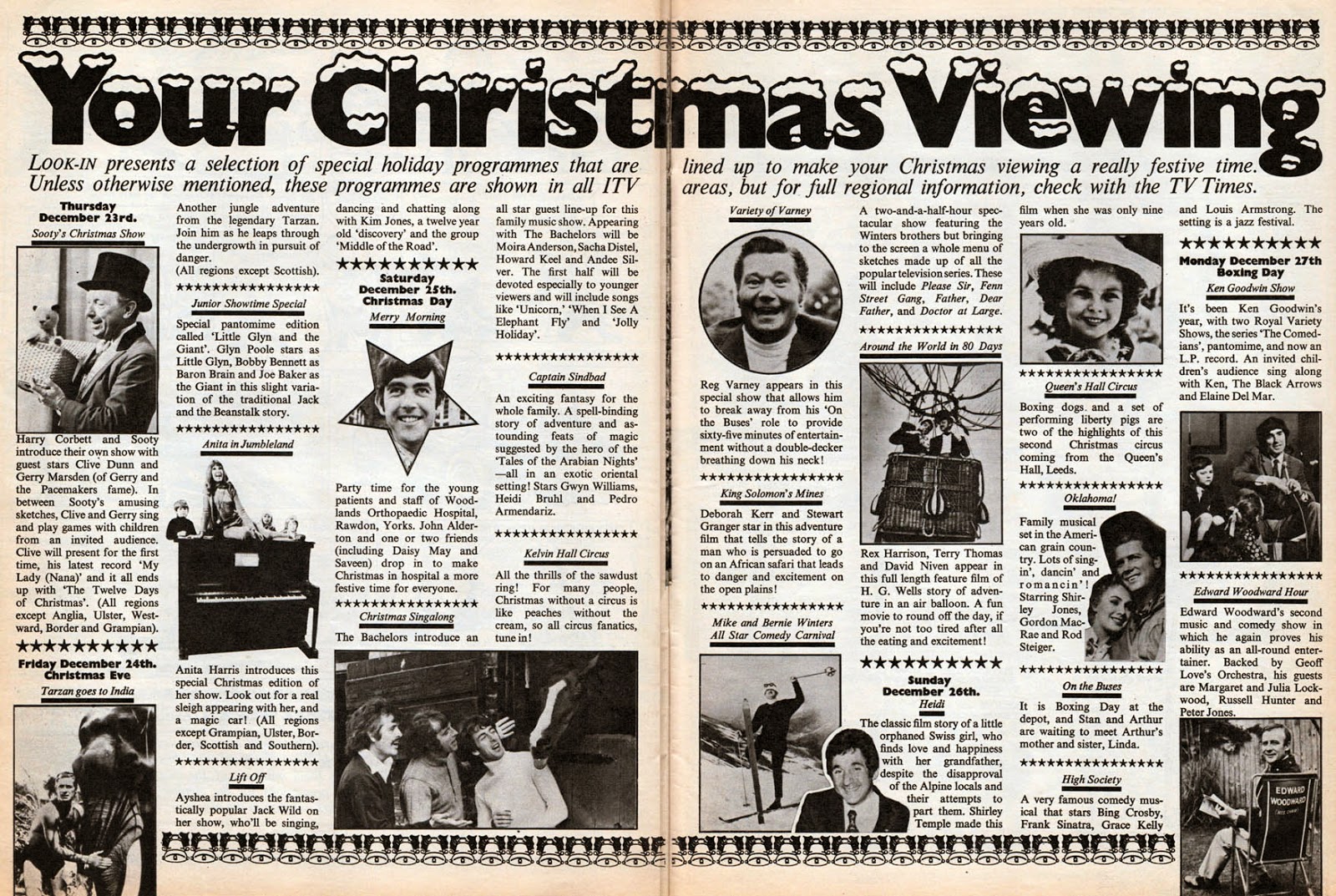 I saw the Christmas Beano in Tesco yesterday so I bought it. I haven't looked at the actual comic yet but I did read that Mischief Manual that came with it - I wouldn't like to have some of those "pranks" done to me as they seemed rather unpleasant to be honest. One thing that surprised me was that I couldn't find a number on The Beano, just the date. I also bought The Simpsons comic and got a free sheet of festive Simpsons stickers and a plastic sci-fi ray gun :)

Harry North is a good artist but I can't say I think much of any of them images of Olive really.. well.. passable up to the last row. The Main-Main problem I've had with the show is all the comments on how Fat Olive is.. She was never that Fat in the Face, but her thick hair was used to cover her face a bit, and then they gave up mostly non-fitting clothes.. in one episode she was in a swimsuit and you could see she had a pretty good body. them images, even more so that last one, just seam to go with the description of the character more then the actress who played her, maker hair appear much fatter and.. to me, older. Stan's eye brows also seam a bit more. sinister then normal, but on the whole, North is a good artist, so I'm wondering how much of that was purely by choice

Two things to bear in mind, Manic: the only reference material artists would have back then might be a few publicity photos or stills from magazines. I'm sure Harry North watched On The Buses on TV for more reference but with no video recorders then he'd have to rely on memory.

Secondly, remember they're caricatures, and not intended to be photo-realistic likenesses, so some exaggeration is inevitable, and expected.

Hi Colin, The Beano hasn't had a cover number for a while now, but usually the 'next issue' ad carries a blurb telling the reader what the next number is, so anyone interested can work it out from that. I don't know why they've dropped the cover number. I'm guessing it's for the same reason that Fleetway and IPC didn't number Valiant, Tiger, Cor, etc, - so that new readers think it's a newish comic.

I agree with Lew... Harry North is a brilliant artist, and I had the please of interviewing him a few years back. A very nice thoughtful man, and a little know fact is he took over scripting as well as drawing On The Buses towards the end of its run. Those ones show how well he integrated his plots and frames with his art.

Thanks Shaqui. I didn't know Harry wrote his own On The Buses scripts later. It kind of mirrors the TV show, where Stephen Lewis and Bob Grant wrote some of the later television scripts. (I'm betting Harry's were funnier though.)

Nice to see these Look-In strips again. My brother had it every week and naturally I had to check its suitability every week too! A very underated comic. BUT, almost totally overlooked by "comicdom " is DC Thomson's 1980's equivalent, TV TOPS, ( later shortened to just TOPS ). In this decade I saw it as the equal to Look-In for TV & pop music, and I for one would like to sing its praises

It was the other way around, John. It started as Tops, and became TV Tops. I only kept the first issue, which I'll show here at some point. I didn't rate it too highly myself but that's probably because I didn't think much of the TV series it featured. That said, it was better than most of the cheapo feature-based mags of today.

Trust me to remember it the wrong way around! I didn't get it right from the start, so don't know who was in the first issue. I'll look forward to your post. When I was buying it, Minder was one of my favourite strips.

I don't think many TV shows of the 1980s resonated with me because I was off out several nights in those days. Never watched Minder, or The Professionals (who were in Tops No.1). I'll dig out my copy of Tops No.1 sometime in the new year.

For the record, TV TOPS became just TOPS again towards the end of its run. I was never sure that the 'TV' was officially part of the title, and was possibly just in a flash for over a year or so to try and push the competition to Look-in...

Thanks for the info, Shaqui. You're right; it was never officially 'TV' Tops. I must admit I didn't really follow the comic. Adam Ant on the cover of the first issue, and a strip featuring him inside, was enough to deter me from picking up any more after No.1.

Following up a comment I made earlier, which will hopefully appear on the blog sometime soon...

The mag ran for *at least* 120 issues - the last issue I have is dated 21 Jan 1984 and by that point there are virtually no strips, it's virtually indistinguishable from Jackie or the like.

Hi Alistair, Many thanks for that info. Very interesting.

I'm afraid I didn't receive a previous comment on this from you. When was it posted?

Must have disappeared into the ether, Lew, but no worries was just saying how much I enjoyed TOPS' brattishness alongside Look-in's class. I think for at least a year or so it was a real rival but it looks like for the latter issues strip budgets were cut.

That's a good comparison. I didn't follow Tops long enough to see much of that brattishness but it's a good description.