There are 80 books planned in the series, with each one running to around 200 pages. As well as containing collected Dredd serials each volume will also contain exclusive bonus features.

It sounds like the format will be similar to the two Marvel partworks that Hachette currently publish. In which case readers can be assured of good quality books. Like most partworks, Judge Dredd The Mega Collection was tested in a few areas first, so some of you may already have the first few books but it's now being relaunched across the UK. 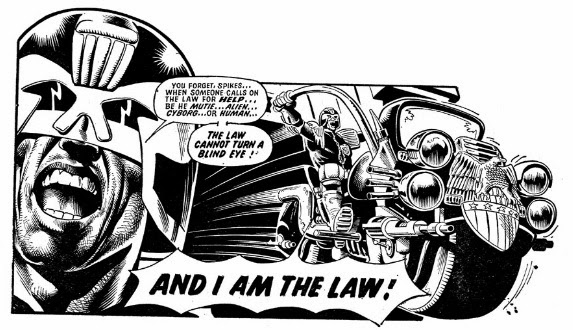 You can find out more, including subscription details, at the official website:
http://www.judgedreddcollection.com/
Posted by Lew Stringer at 00:08

This is good news. The Marvel books were good. I shall be getting the first few at least.

I was looking at the Marvel ones in Forbidden Planet today. Pleased to see they reprint some 60s/70s material now.

What I'd really like to see is a similar partwork reprinting classic UK material from across the last 140 years but it's never going to happen. There's just not enough people interested to make it viable.

Great news. Although my flat is now filled to the brim with Marvel hardbacks.

It's a surprise that no-one has licensed the DC back catalog for something similar.

It would be great (albeit expensive) if they also decided to press ahead with the GERRY ANDERSON version which was also tested this year (not that I've actually seen a copy but...)

Perhaps it's considered too soon for a DC collection as they rebooted their continuity a few years ago so would only have a limited number of comics to reprint. (Comics that are already in print in book form.) Who knows the strange thoughts in the publishing industry sometimes? (Also, DC aren't as popular as Marvel in the UK, except for Batman.)

As for the Gerry Anderson collection, I understand the test didn't go as well as hoped so perhaps it's been shelved.