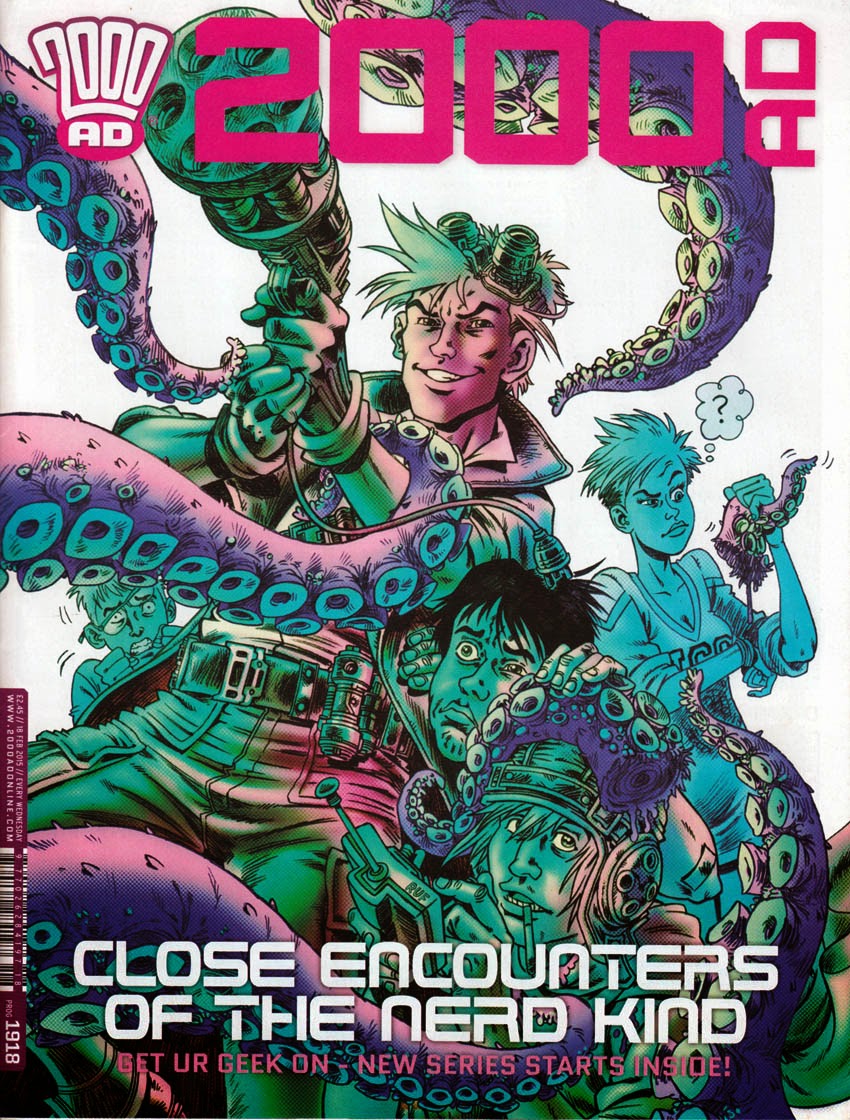 I really like Rufus Dayglo's cover for 2000AD Prog 1918. The covers for this comic are usually very dark and grim (albeit well accomplished of course) so this bright, fun cover is a breath of fresh air. It also makes 2000AD stand out on the shelves, which is always a good way to attract new readers.

I found this to be a good issue all round. It kicks off with part 8 of Dark Justice, by John Wagner and Greg Staples, with Dredd having a scrap with Judge Death...

Then we're into Part 1 of Survival Geeks (promoted on the cover) written by Gordon Rennie and Emma Beeby with some excellent artwork from Neil Googe (colours by Gary Caldwell). I like the style of this a lot... 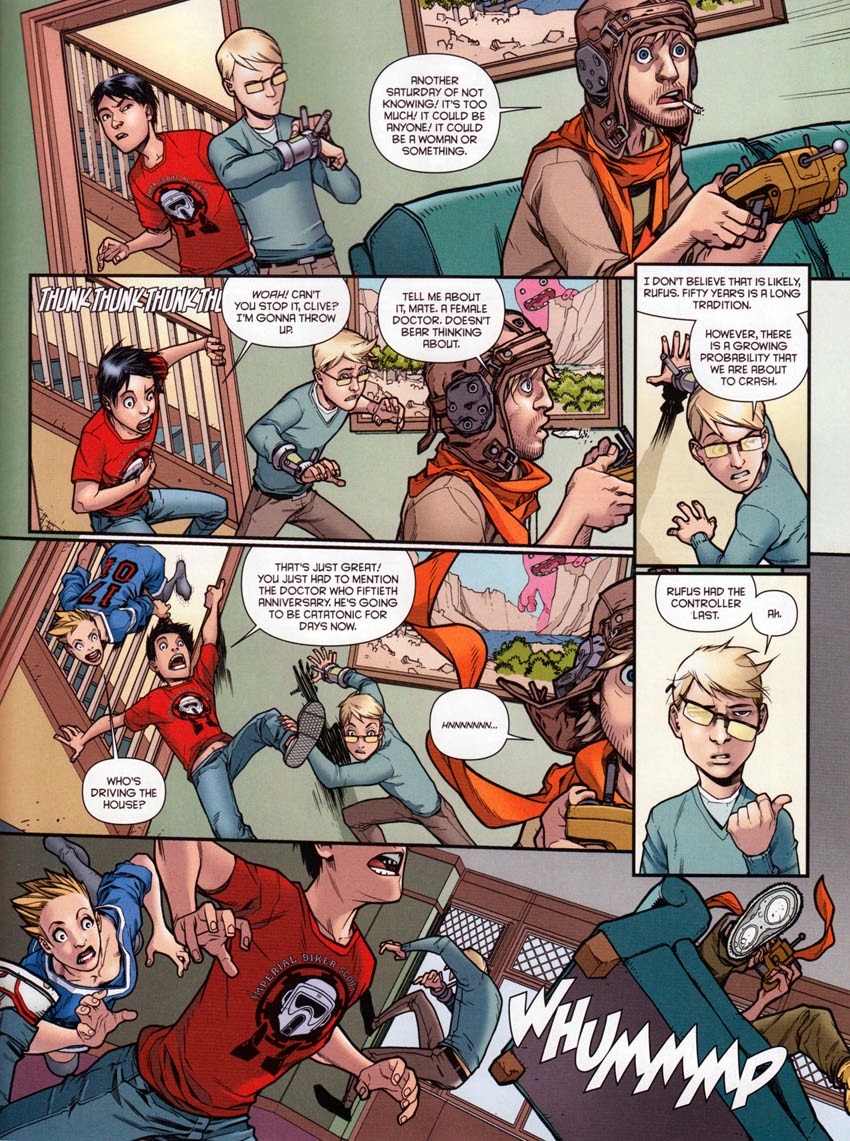 Tharg's 3rillers don't always do a lot for me I'm afraid but I found Part 1 of Station to Station really gripping. Story by Eddie Robson, art by Darren Douglas. I'm looking forward to the rest of this three-parter.

The Order continues, with Part 8 this week. I haven't really connected with Kek-W's story as much as I'd have liked to but you can never go wrong with a strip drawn by the great John Burns! For over 50 years he's been one of the best artists working in comics and his stuff is still top notch! 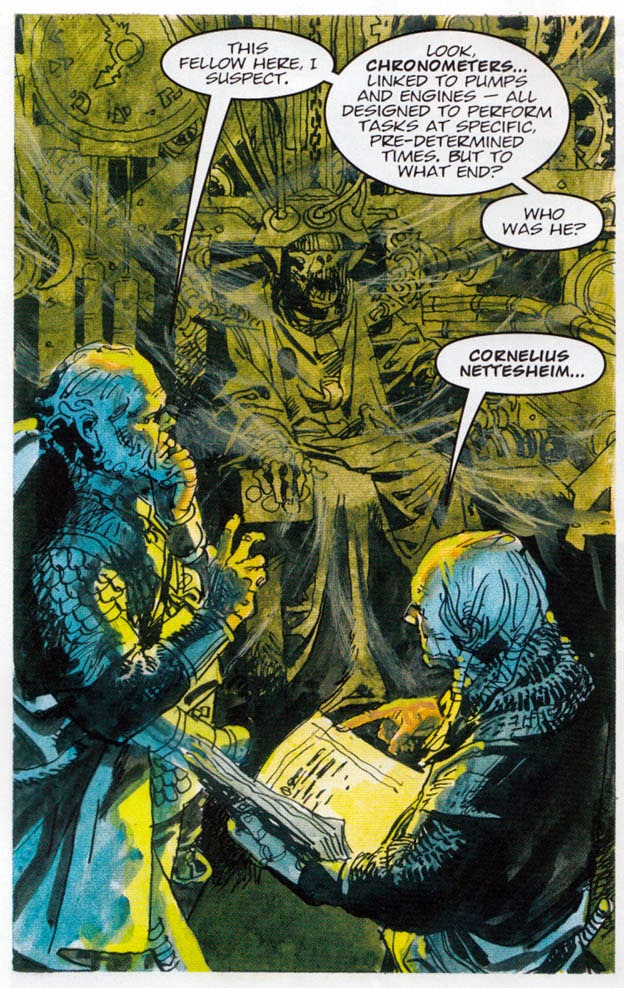 Savage Book 9: Grinders continues with Part 8 by Pat Mills and Patrick Goddard.  The Volgan invasion is over, but the intrigue continues!

By the way, I've now updated my post about the late Brett Ewins with a longer tribute and more images. See it here:
http://lewstringer.blogspot.co.uk/2015/02/brett-ewins-rest-in-peace.html

It was a lovely tribute, Lew. Such a shame to hear about the mental pains he will have endured by being bipolar.I never knew any of this. To me, he was just Tharg's best Judge Anderson "art droid".

You might find it an acquired taste Colin as 2000AD has its own style and tone to the stories, but it really does feature the best UK talent in adventure comics. Plus of course it's the last surviving traditional adventure weekly.

There's another 'boom' issue in about four weeks, which will kick off with all new first episodes to the stories so that'd be a good jumping on point.

Col, if you really want to see what you missed out on, you can do much worse than buying the current Judge Dredd - The Mega Collection #3 "The Apocalypse Wars"! - 2000 AD at its very best in a beautiful hardback book!
( you KNOW I wouldn't lie to you, mate! )

Yes, well worth buying, if you can find it. Dunno about your area but my local shops no longer stock it. I know it's common for partworks to go to subscription / reservation-only after several issues but around here it's happened after issue 1.

Phil Boyce had a letter in last week's 2000AD saying he'd started reading it because I plugged it here. At this rate they should give me a free subscription! :)