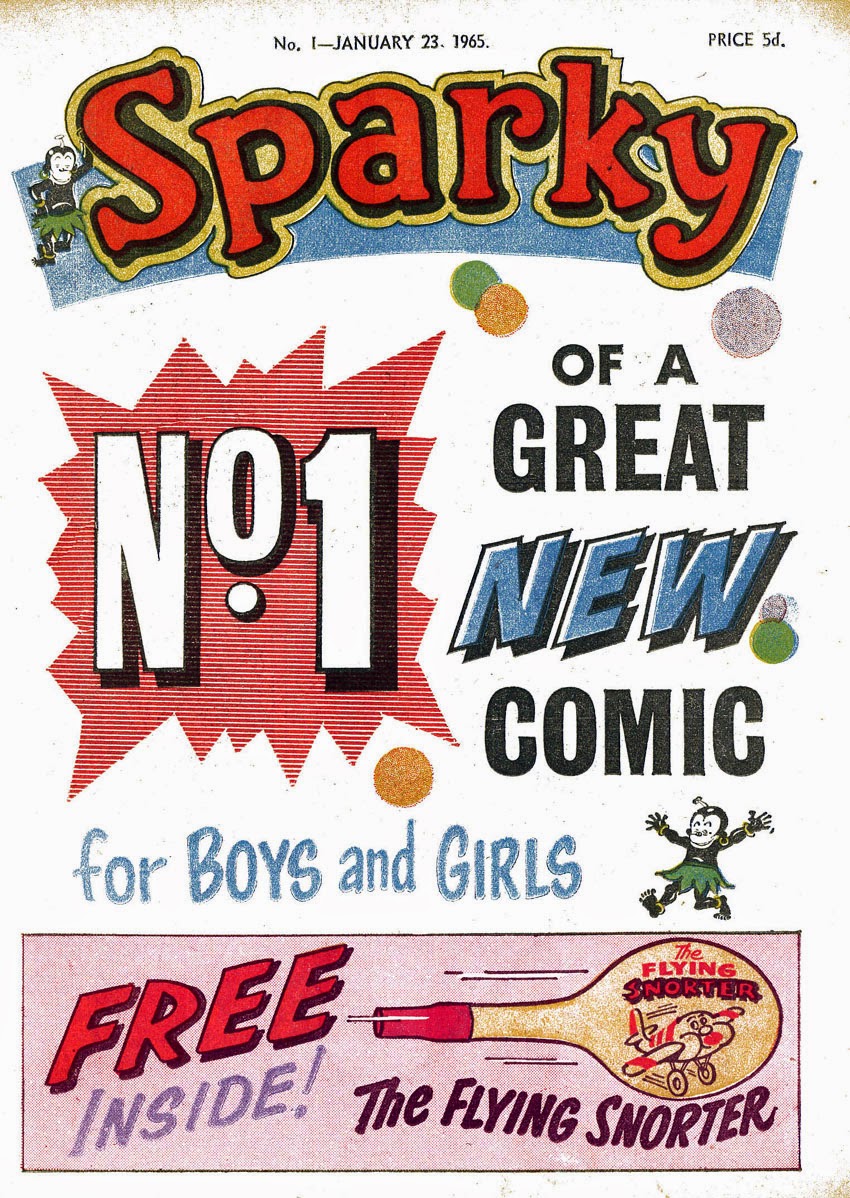 A couple of weeks ago for the comic's 50th anniversary I showed a selection of early pages from Sparky on this blog. I mentioned I didn't have issue 1 but Blimey reader Jimmy Tweed has kindly sent me scans of the front and back covers. Sparky strip artwork is by Ron Spencer. 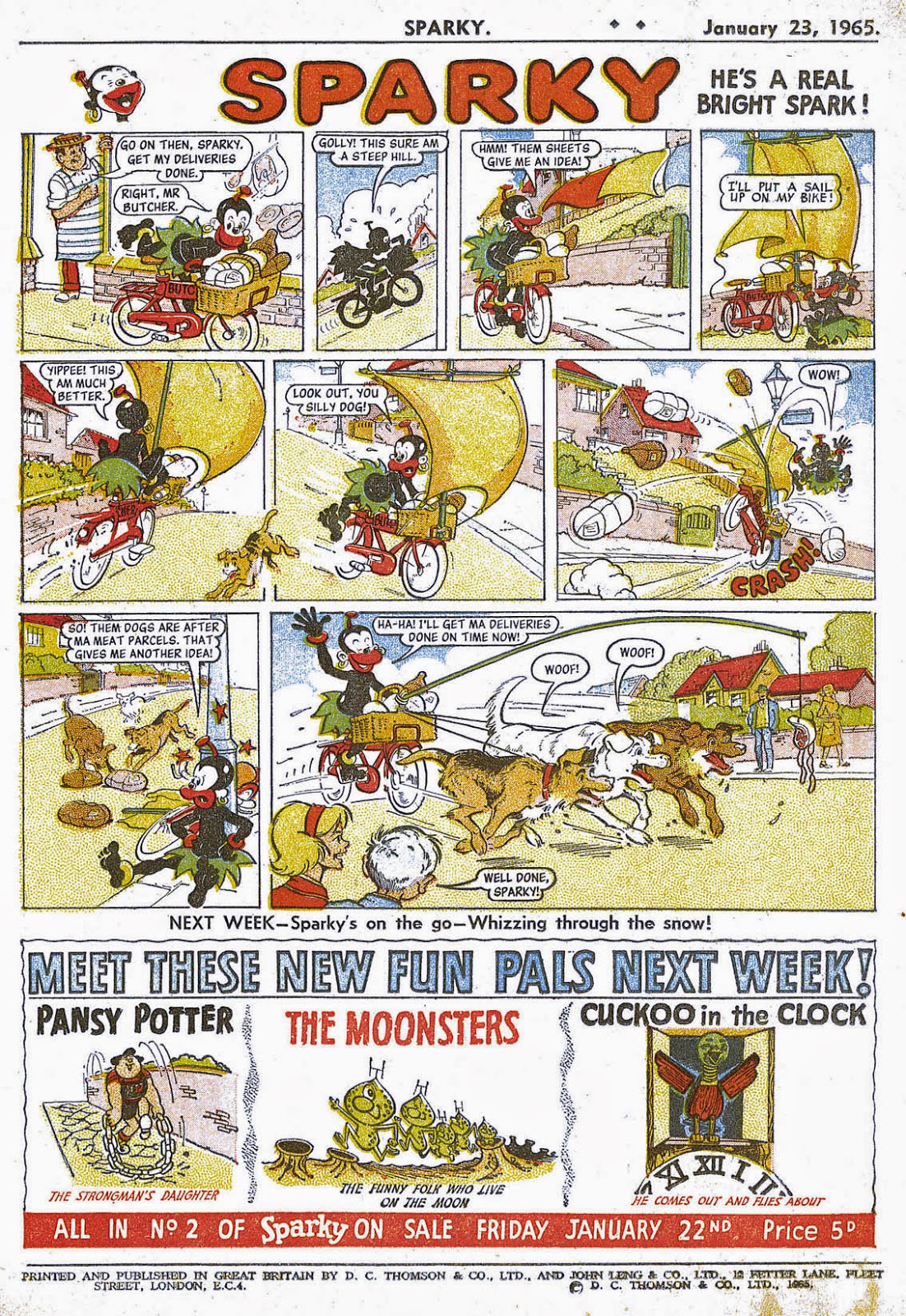 Obviously I can't show a strip like that without comment. The interesting, and alarming, thing about this first Sparky strip is that the character is talking in that stereotypical way that was becoming outdated even by 1965 when this saw print. A small compensation is that from the following week, when Sparky moved to the front cover, his dialogue was in perfect English. Too bad his visual design remained based on that of 1930s character Sooty Snowball. It may seem hard to believe today that this strip debuted in the same time period that the Civil Rights movement was often in the news. Yet sadly this sort of caricature was still seen in strips, and in gag cartoons in newspapers and joke books in the sixties.

I'm sure no one was being intentionally racist. People are products of their times, and Sparky, like Stymie and his Magic Wishbone of decades earlier, wasn't intended as a malicious caricature. All the same, I can't help wondering how young black readers felt, already struggling to be accepted as equals, to see this over-exaggerated grass-skirted character on the covers of a new comic interacting with all-white characters who were drawn semi-realistically.

Race relations became a huge and important talking point in the sixties of course and eventually caricatures like Sparky were considered out of touch. The character was gradually phased out of the comic by the end of the decade. Sparky became a much better comic without him.

My thanks again to Jimmy Tweed for sending me these fascinating scans of comics history.
Posted by Lew Stringer at 00:46

Email ThisBlogThis!Share to TwitterShare to FacebookShare to Pinterest
Labels: Sparky

personally, as it wasn't done with malice, I never see the difference between doing something like this and the aterotypes of British/English people often seen in American shows.. apart from they are often made WITH malice. But it would be nice to get a range of views on the subject..
(by the way, BUMBERSHOOT is an American word, it was created as an American word, but it was created to be what the English call an umbrella purely as an insult.. and that term is still used quite often ¬_¬)

If you look back now at old DCTh annuals, you would CRINGE at the way any black characters were portrayed, saying, "dem" and "dese", etc.!
I know no harm was MEANT, but offence must have been caused to black readers.

The difference, Manic, is that black people have been subjected to slavery and terrible prejudice in relatively recent history. Stereotyping white people just hasn't been in the same league. I've never heard that 'bumbershoot' was an insult to the English but it hardly compares to the derogatory remarks against other races over the last few centuries.

It was a product of the times, of course..and not much thought was given to health and safety or how minorities were viewed. The war stories were full of easy racism and we lapped it up .Sexism was a norm as was things like the Black and White Minstrel Show which had white men "blacked up" a caricatures of black men ...playing black men in make-up!!! Crazy stuff when you consider it...Then again women were treated as "birds" too or simply sex -objects.

Those kind of stereotypes often appeared in TinTin and Asterisk too.

one of these bits where we have to disagree cause sadly, Slavery and prejudice has no limits.. While black people (a term that is seam as very offense in some parts) were badly treated in 'white' (also offense) countries, the reverse is also true. It's why I treat all prejudices and rascims etc, as the same. People hate others purely cause they want to for no other reason. they don't care what the difference is, be is race, skin colour, country of origin or even going to a different school or parts of a different club of social group. People always want to try to feel good about themselves by belittling others. when it's not done with malice, I'm more fine. there are people that have thrown some quite racist remarks at me but they didn't mean them to be offensive, so I took them in the way they were meant.

there was an interesting case a couple of years back with a movie where two characters were heavily slammed at being racist sterotypes.. most of the dialogue and acting style for them came from the actors who played them who were quiet surprised that they were being offensive to themselves.

Manic, if you're saying all racial prejudice is wrong regardless of race then I completely agree with you. Sorry to hear you've received racist remarks yourself.

I think the Black & White Minstrel Show lasted till 1978, didn't it ? Yes, slavery was appalling (and did you know the Church of England owned a slave plantation in the West Indies !!) but it should be acknowledged how much the Africans themselves were involved - about 13 million slaves were taken from Africa but every one of them was captured and sold into slavery by OTHER AFRICANS, this is quietly brushed under the carpet. And remember that life for most white people was absolutely ghastly too with millions forced to work in factories and cotton mills for extremely long hours receiving poverty pay with no rights, no holidays, no healthcare etc - they were just mercilessly exploited by a rich elite and were really just slaves too in my opinion.

Yes, working conditions in the cotton mills were terrible for the white working class but it wasn't quite as traumatic as slavery where people had been forcibly shipped away in chains from their country and families.

However, the only reason I mentioned slavery was to indicate that black history had already been traumatic enough without continuing to add insults such as racial caricatures.

As for 'bumbershoot', it seems to be just an Americanism for umbrella and a way to caricature British people carrying one. A bit like drawing an American tourist wearing a stetson. Hardly in the same league as the gross physical caricatures of Africans.