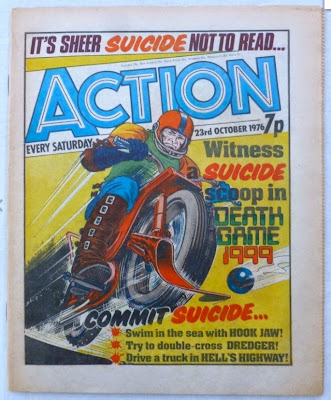 Back in 1976 when IPC were forced to suspend Action weekly because of its violent and anti-authoritarian content there was one issue that was never distributed. Only 30 issues of the issue dated 23rd October are thought to exist now and one in great condition is currently on eBay! 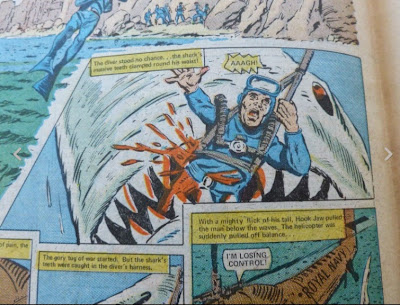 The bidding ends on 31st May and at time of writing (23rd May) the bids have already reached £521. Far too high for my pocket but it'll be interesting to see how much it finally goes for.

If you want to bid, or just follow the auction, go to the phil-comics page by clicking here.

My thanks to Hibernia Comics for bringing this to my attention. Images taken from phil-comics' eBay page.

UPDATE 26/5/2015: On his Down the Tubes blog, John Freeman has dug a bit deeper on the background to this story and found that a full print run of this issue was printed, but the large majority were pulped. See here for the details:
http://downthetubes.net/?p=22473 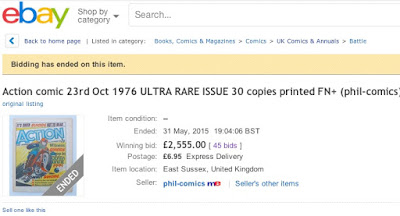 Email ThisBlogThis!Share to TwitterShare to FacebookShare to Pinterest
Labels: Action

If I had my time again I would collect all of these!

Blimey! (No pun intended), I bought this issue at one of the Denis Gifford auctions in 2001 for the princely sum of £135 - and that included the first issues of series 1 and 2, which I already owned. I knew this issue was a rarity, but am surprised its value has shot up so much - unusual for a modern British comic. Have just checked ebay and the value has risen to £770 with 23 bids.

Have just re-read my comment and had to laugh that I consider this 39 year old issue is 'a modern comic', but it just doesn't seem that long ago to me.

Cheers for your blog, Lew. I always look forward to reading it.

Congratulations on being one of the few people to own a copy of this rare comic, David! That's a bargain price by today's standards.

I'm not the sort to think that time flies, - 40 years really does feel like 40 years to me, - but I still think of myself as a relative newbie in comics, even though I've been working for over 30 years.

John, I still have the copies I bought back in 1976/77, although I lost interest in it after it was censored so there are quite a few gaps in the run after it returned.