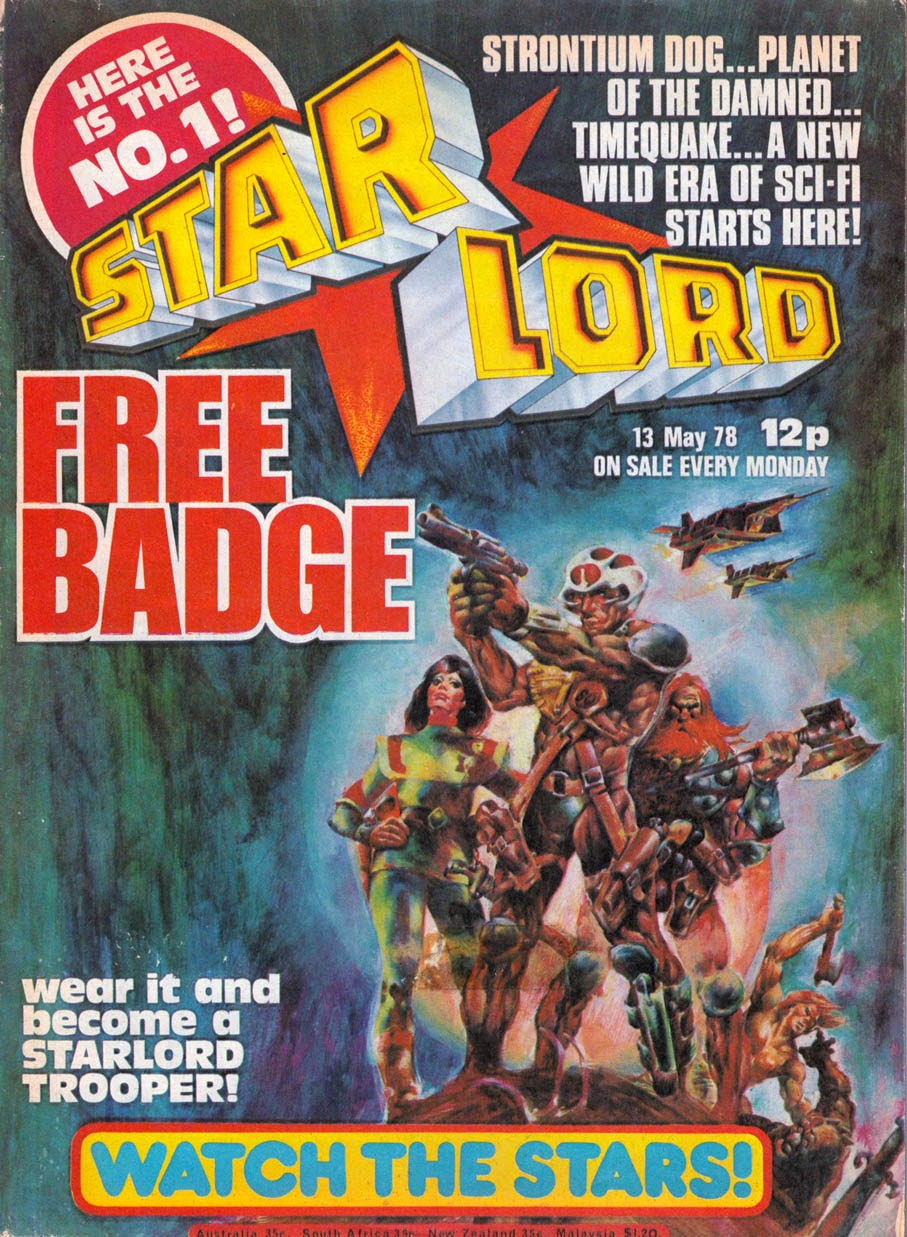 Saturday 6th May 1978 saw the publication of IPC's new sci-fi weekly Starlord in newsagents across the UK. The new comic was a companion to 2000AD and was originally planned as a monthly until IPC got cold feet, resulting in some quick changes before launching as a weekly.

As one IPC editor told me a few years later, monthly comics were considered too risky back then. The concern was that the young target audience who were accustomed to weekly comics would either forget which week a monthly would come out, or even lose interest during the four week wait for the next issue. Of course that attitude changed over the years as UK publishers had to rethink the frequency of their comics in the wake of ever decreasing sales to give them a longer shelf life. These days a monthly frequency is the norm, with weeklies being the oddities.

Anyway, back to Starlord No.1. The 32 page comic was on slicker paper than its sister title 2000AD and boasted more colour and better printing. It was also a few pence more expensive at 12p an issue. What it had in common with 2000AD was its presentation of stories in a dynamic and hyperactive fashion. For example, upon opening issue 1, the reader was immediately plunged into the relentlessly fast-paced Planet of the Damned by 'R.E.Wright' (Pat Mills) and Lalia. Here's the first two pages of the six page first episode which used the then-popular story theme about the 'Bermuda Triangle'... 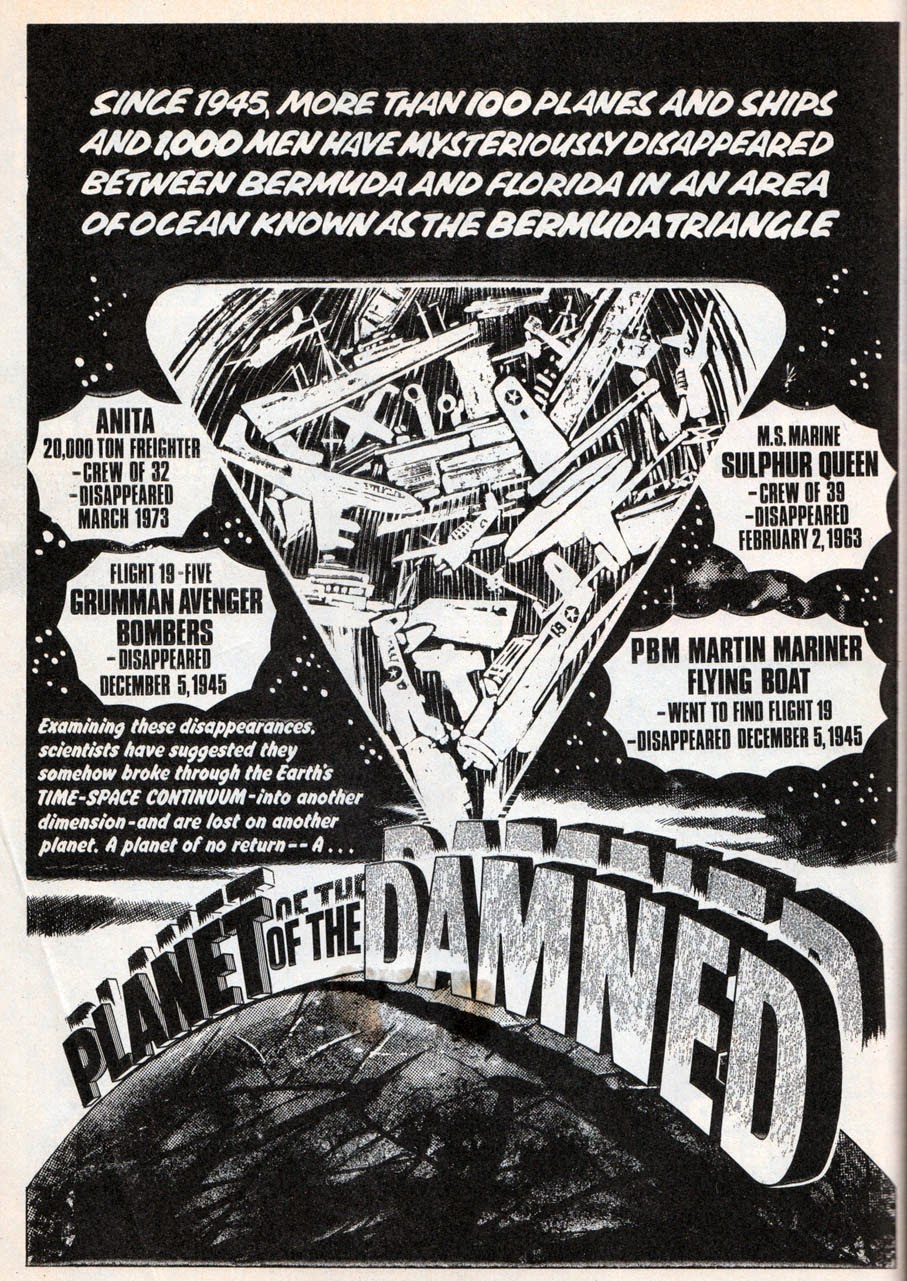 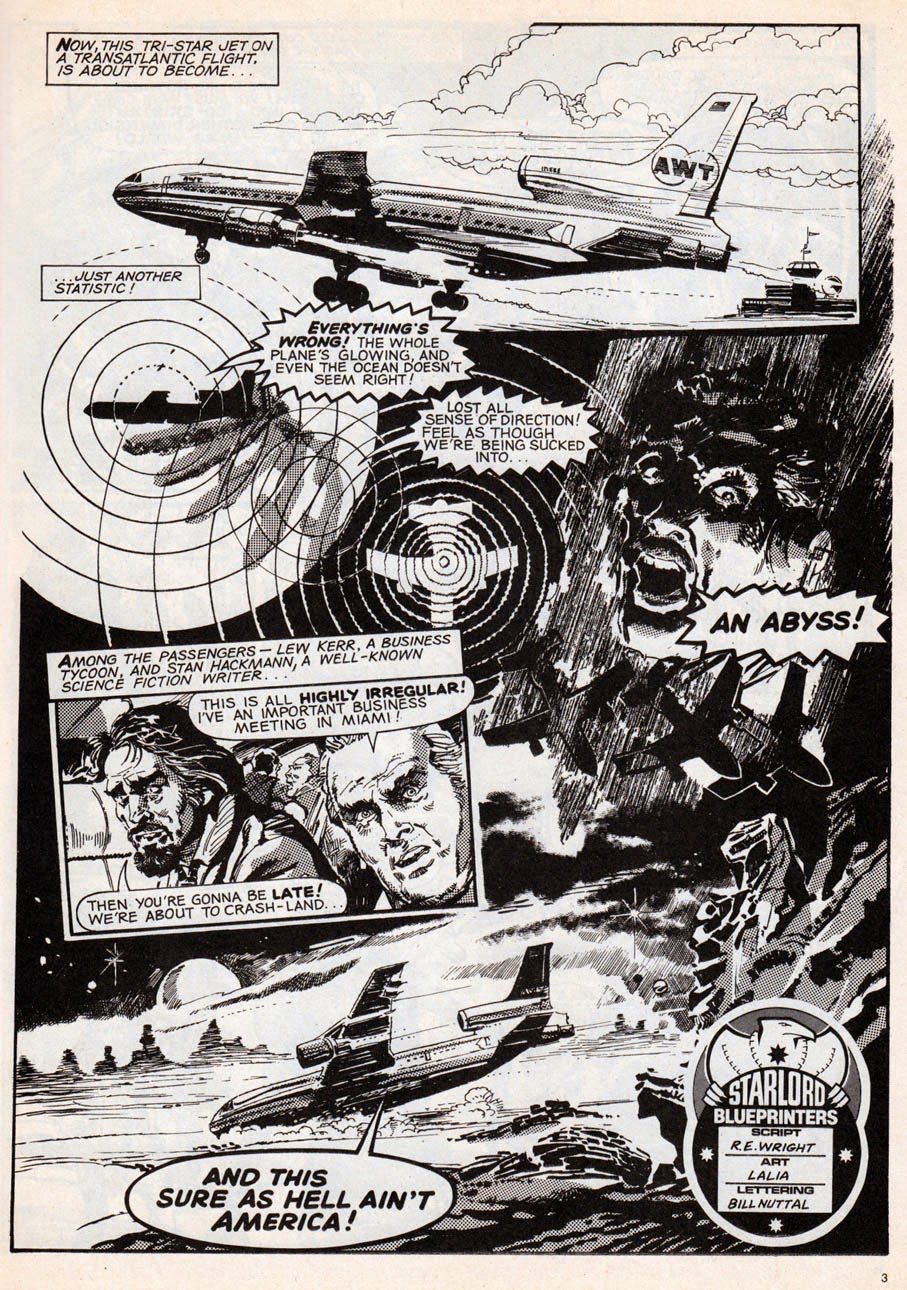 Next came the first chapter of Time Quake, written by Jack Adrian with fantastic artwork by Ian Kennedy. Here's the first three pages... 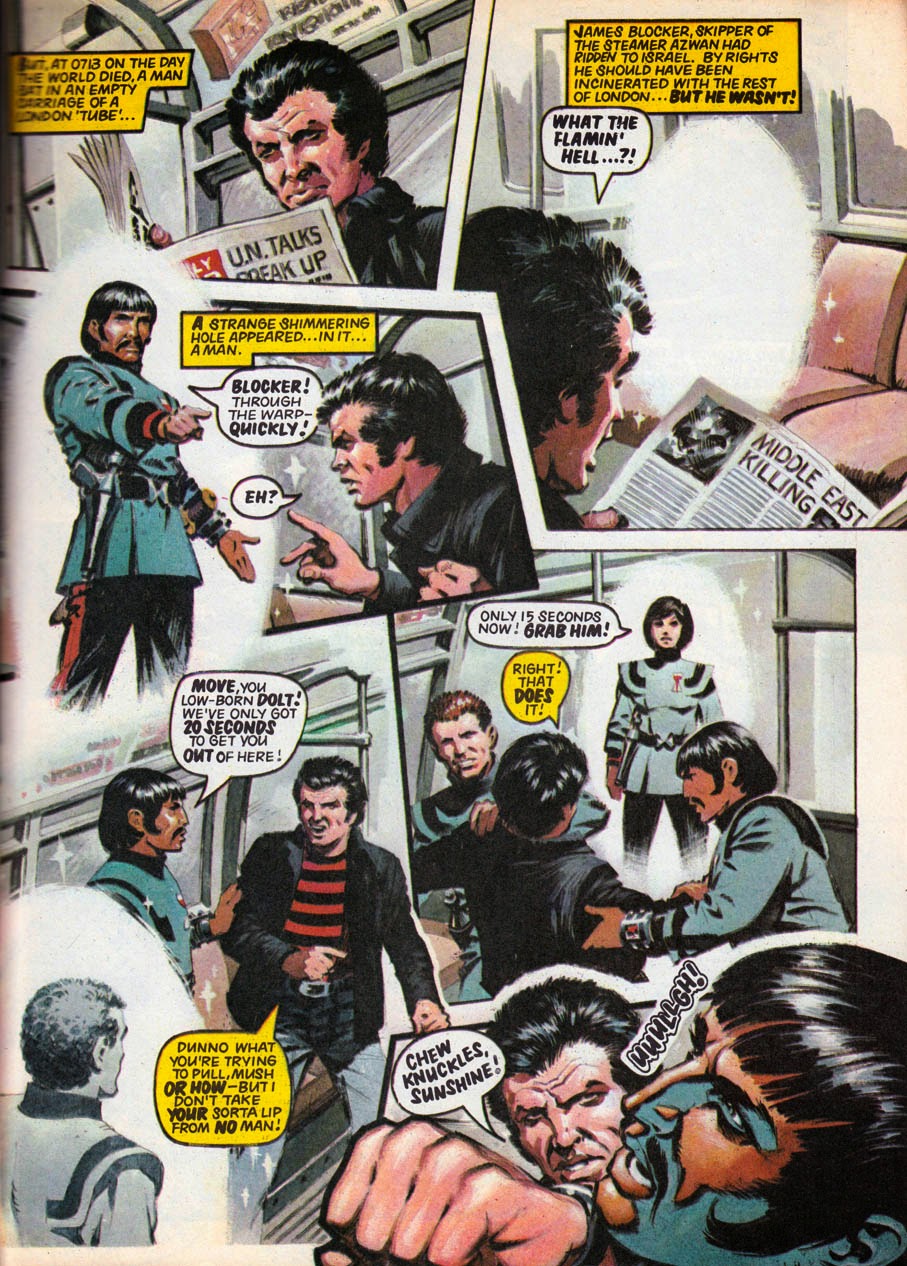 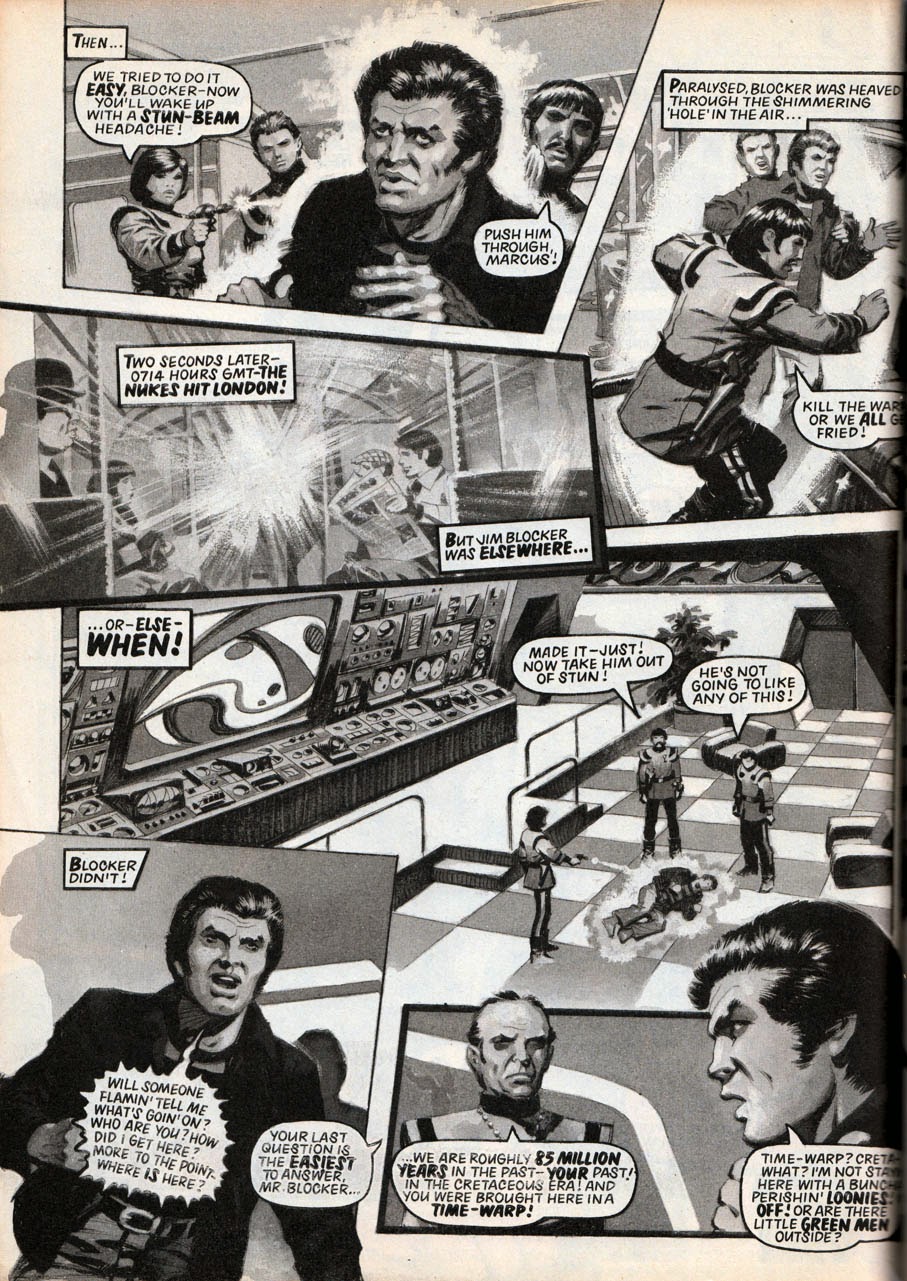 Next, time for a breather and for the comic's fictional editor Starlord to introduce himself with art by Ian Gibson and an editorial dripping with paranoia... 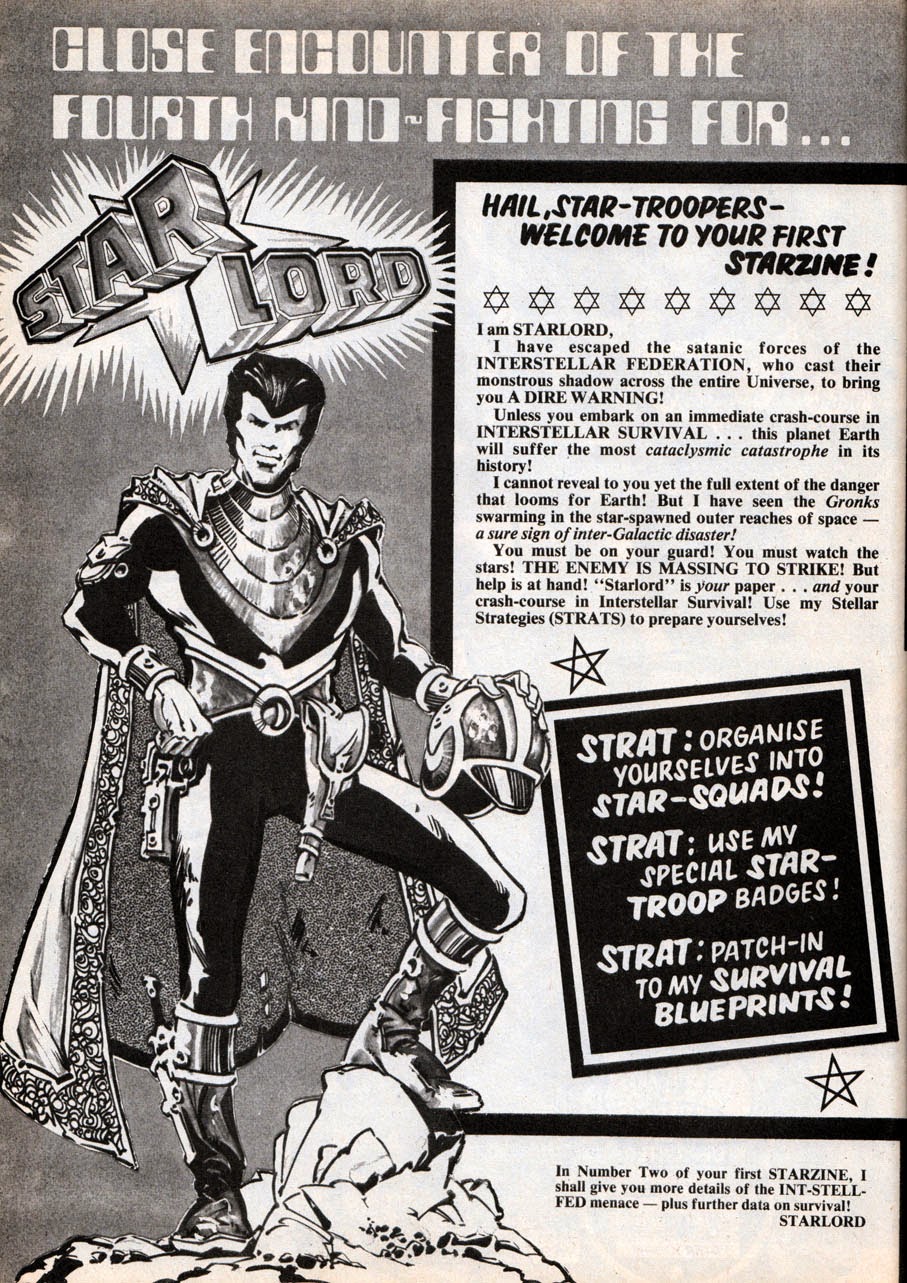 The facing page showed the six alternative free badges, one of which was randomly attached by tape to the cover. If the readers weren't already jittery from Starlord's warning of imminent alien invasion the advisory about sticking the badges onto flesh would have completely pushed them over the edge: "you could develop a skin disorder, putting you out of combat"! 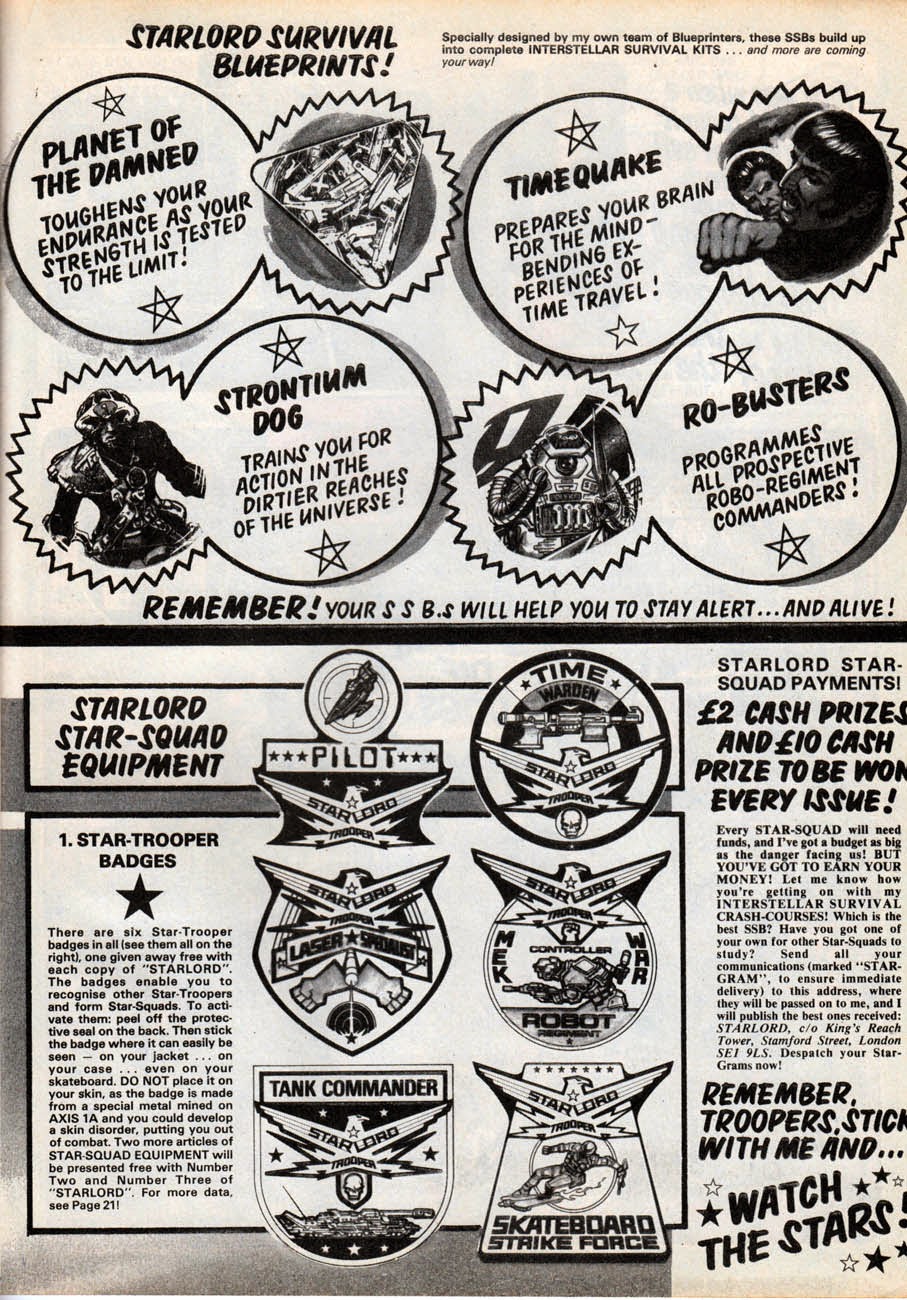 Here's one of those very badges, designed by Kevin O'Neill... 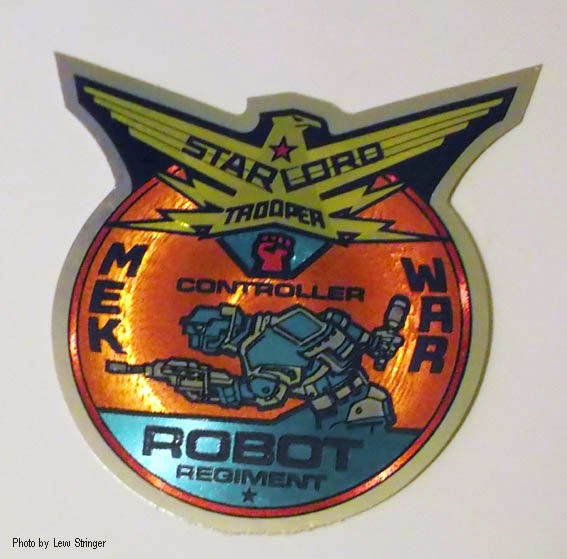 Across the centre pages, the first episode of Strontium Dog, by T.B. Grover (John Wagner) and Carlos Ezquerra. A popular character still around today in the pages of the latest 2000AD. Here's the first two pages... 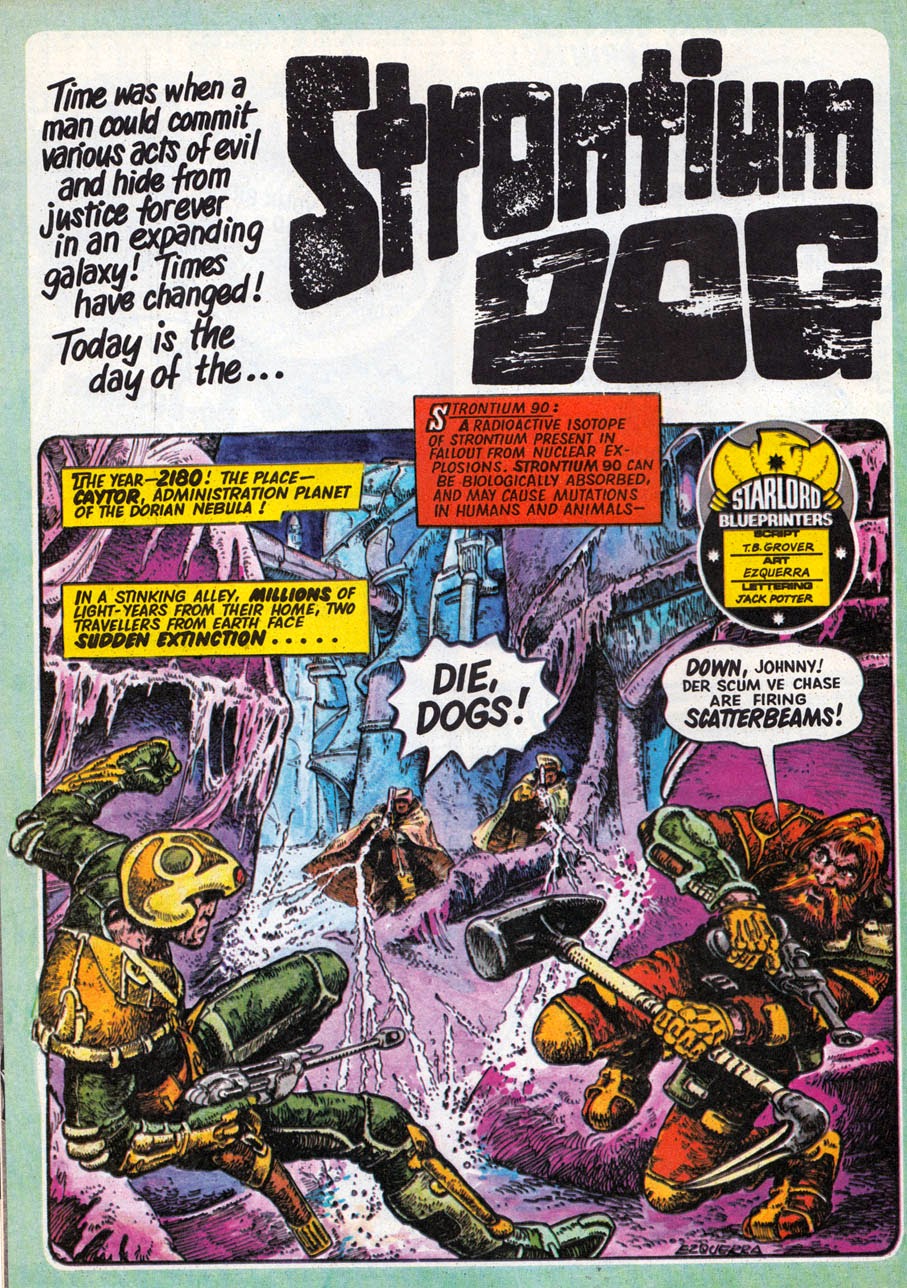 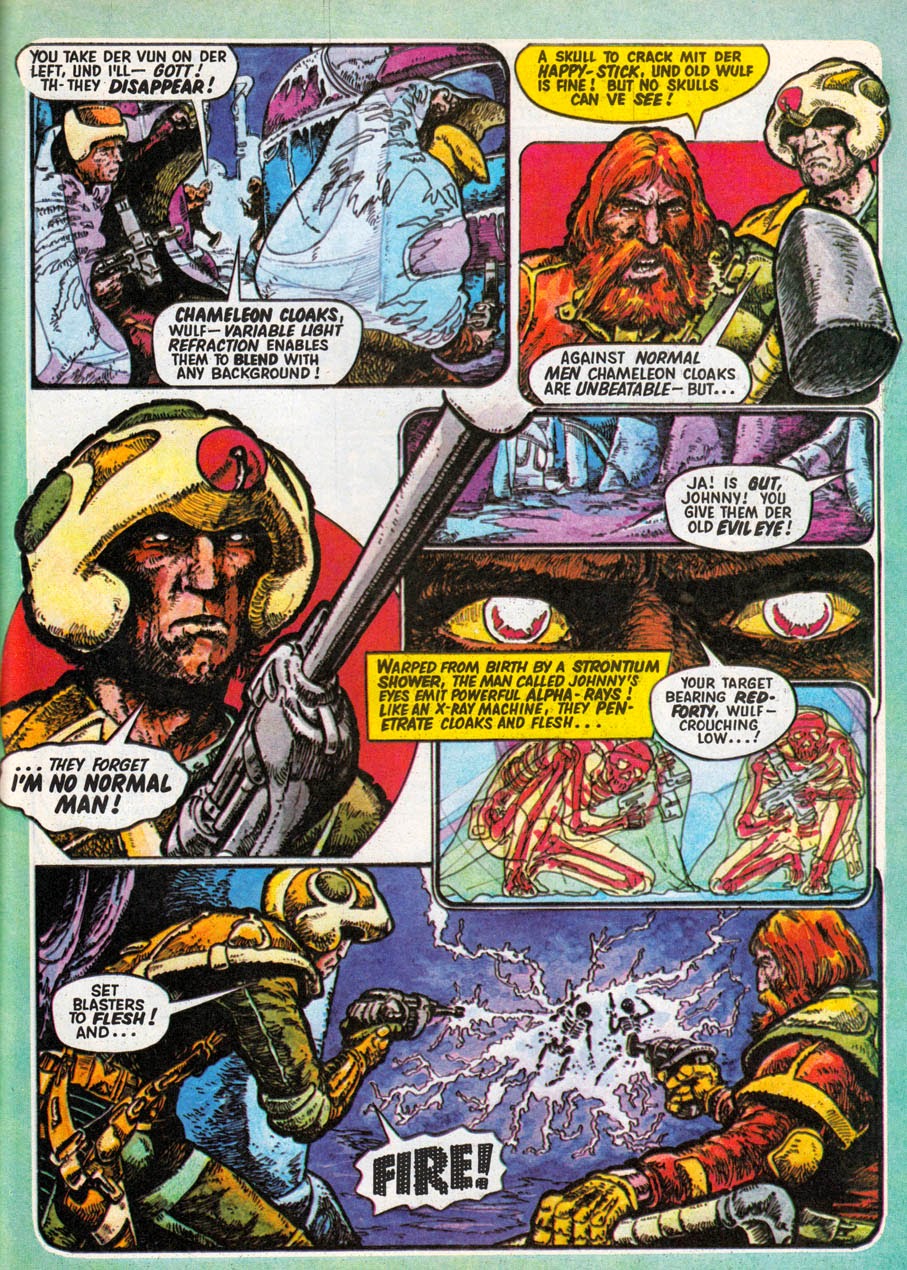 Rounding off the issue was the longest story, Ro-Busters, running to 11 pages! This was one of the strips originally intended for the monthly, which accounted for its length. Subsequent chapters would be half the size. 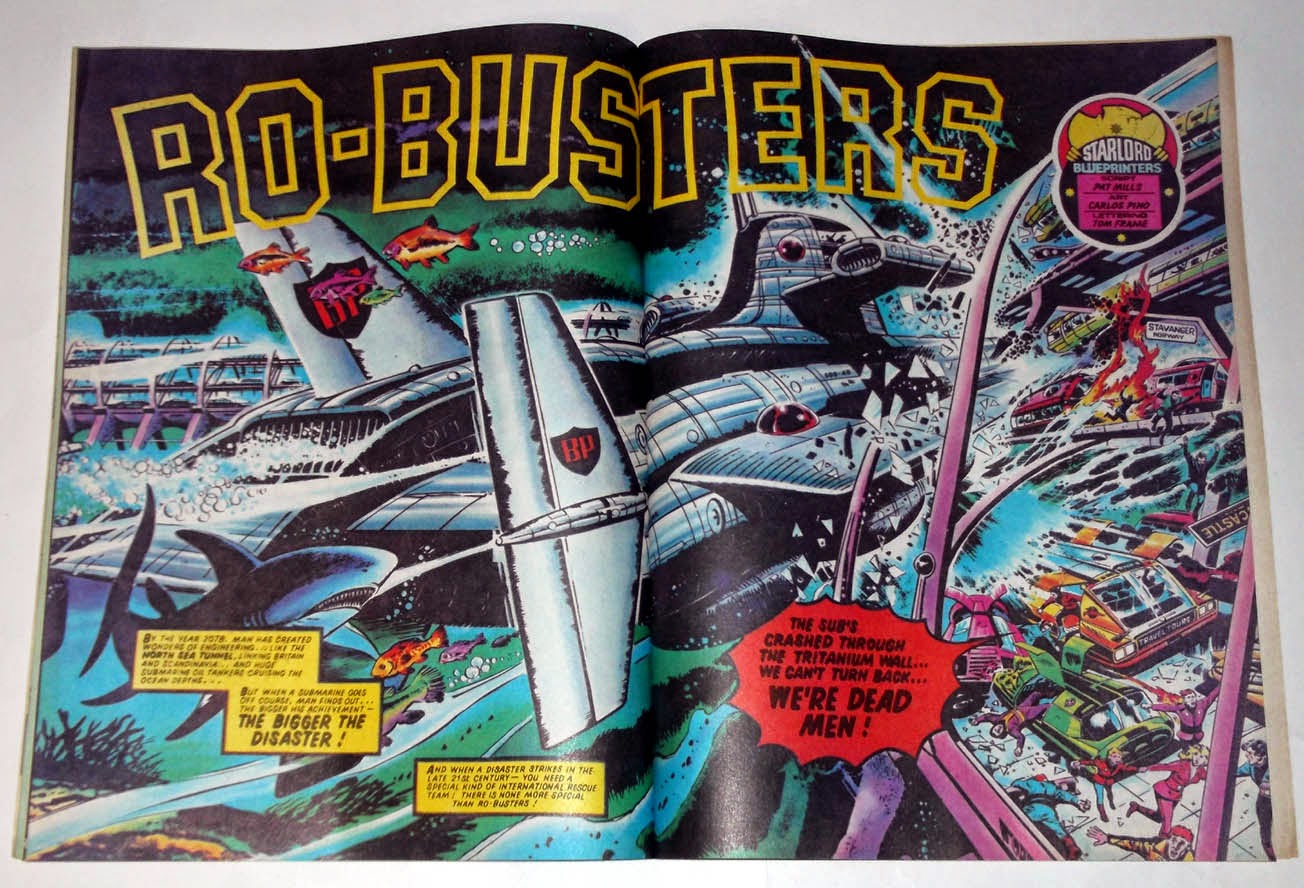 Script by Pat Mills, artwork by Carlos Pino. The war robot Hammerstein still appears today in 2000AD's A.B.C. Warriors and Savage strips, with Pat Mills having connected several of his series into one universe. 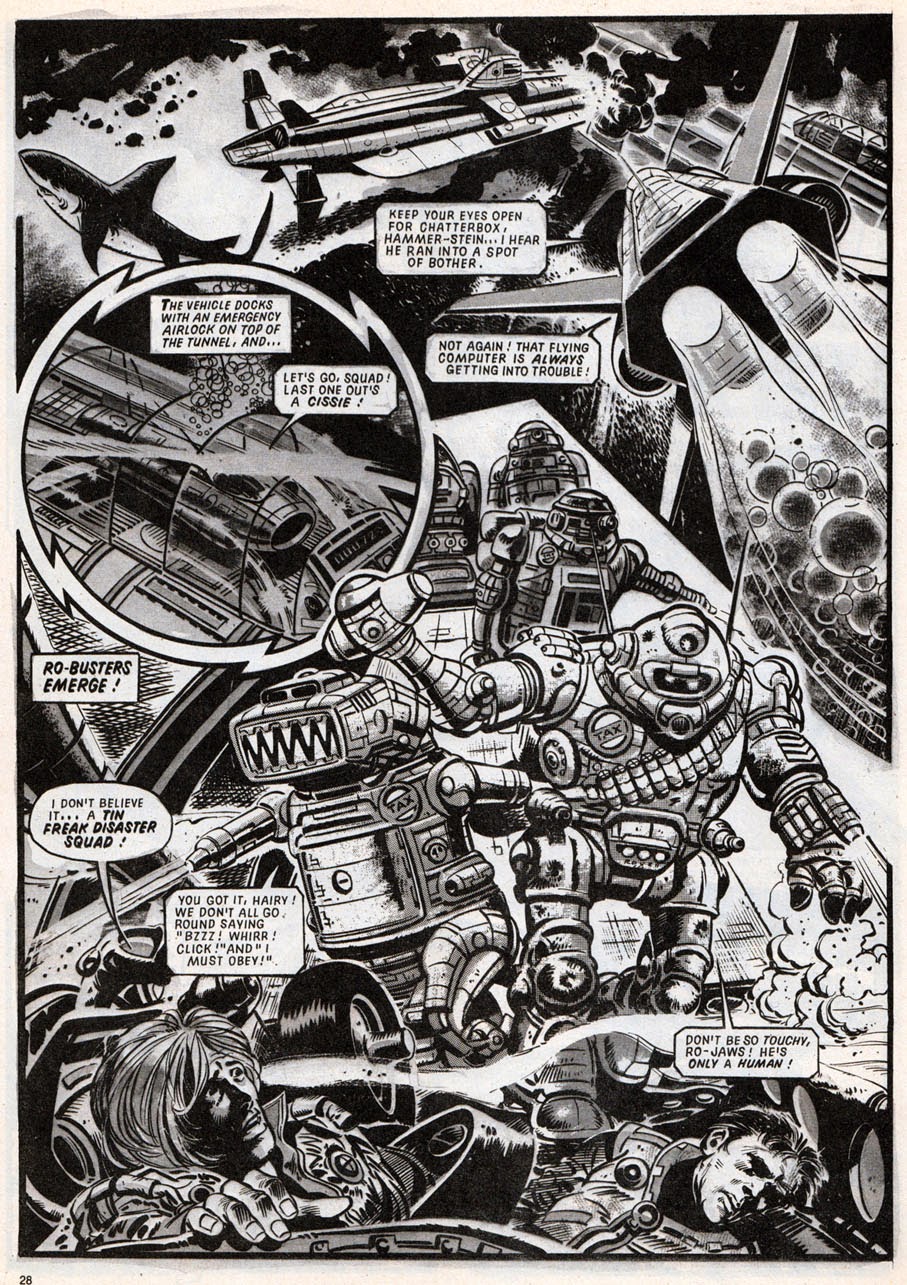 Starlord wasn't a big success for IPC and sadly ended after 22 weeks, merging into 2000AD. Apparently 2000AD's sales were not good either, but it's thought that Starlord was sacrificed because it was more expensive to produce. On a positive note, the merger did 2000AD a lot of good, bringing in Ro-Busters and Strontium Dog which strengthened the comic. 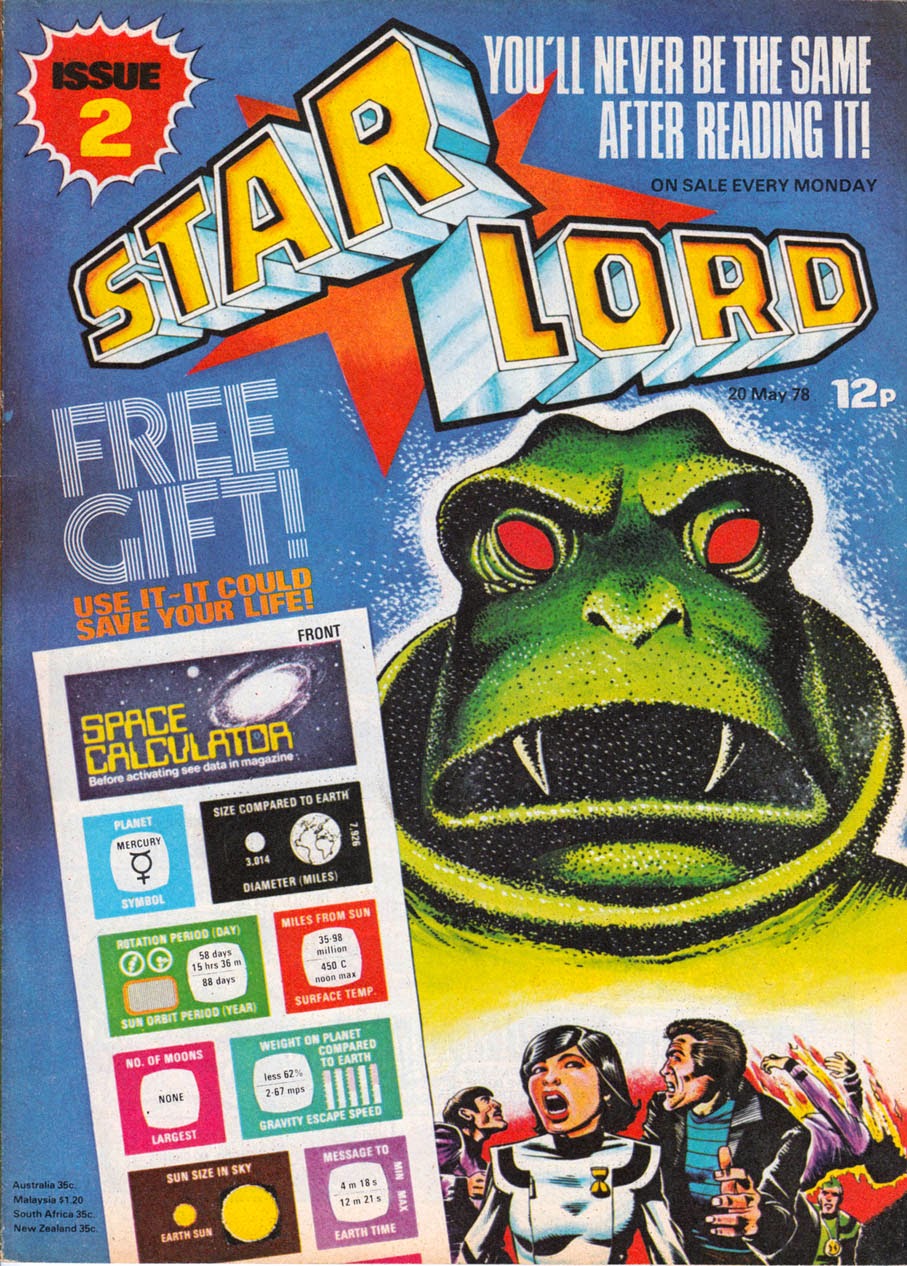 ...and No.3 sported a fantastic cover by Kevin O'Neill... 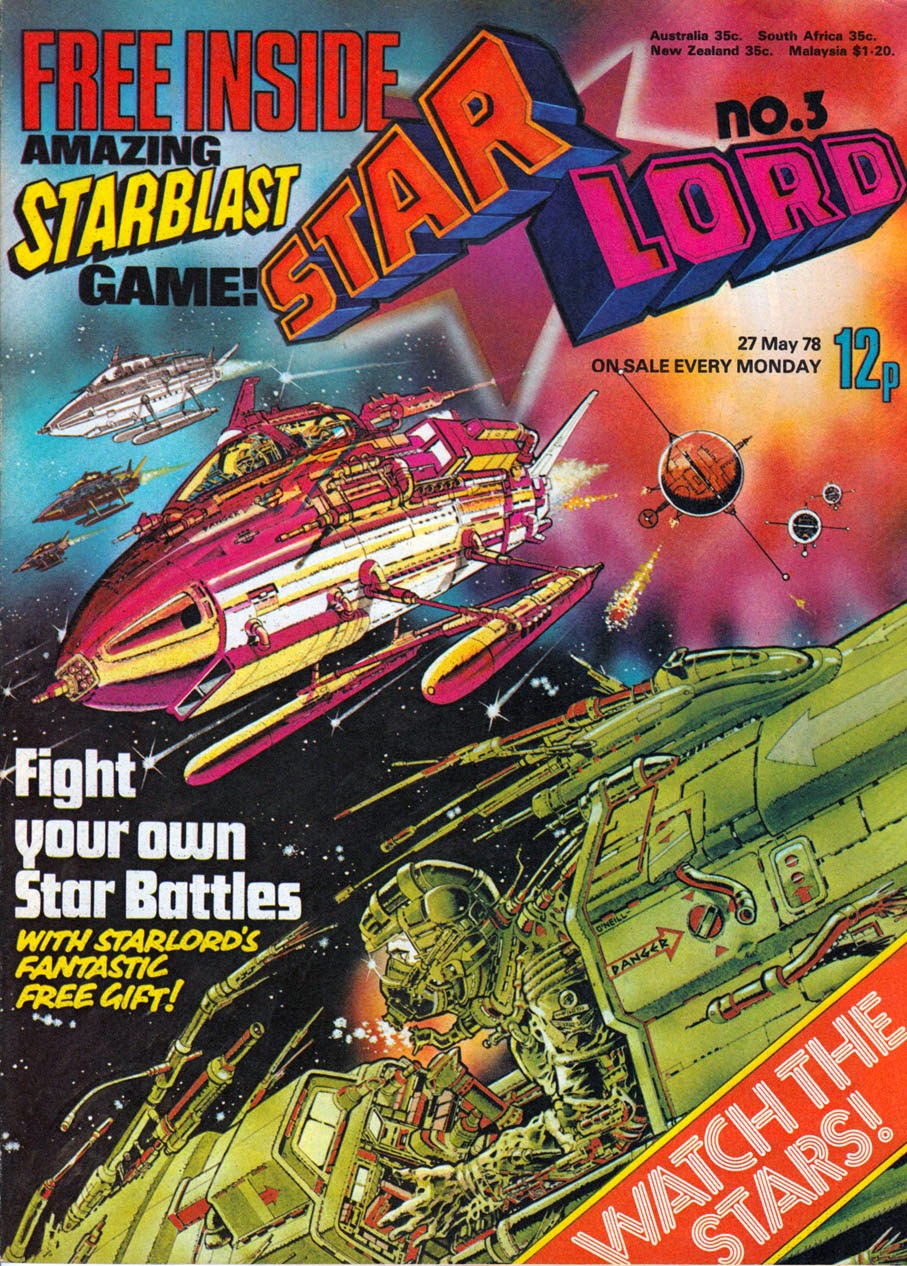 The free gift in No.2 was the 'Space Calculator', a cardboard slide which gave information on the planets of our galaxy. No.3's freebie was a 'Starblast' game; a variation of 'Battleships', with a wipe-clean laminated card that could be re-used. 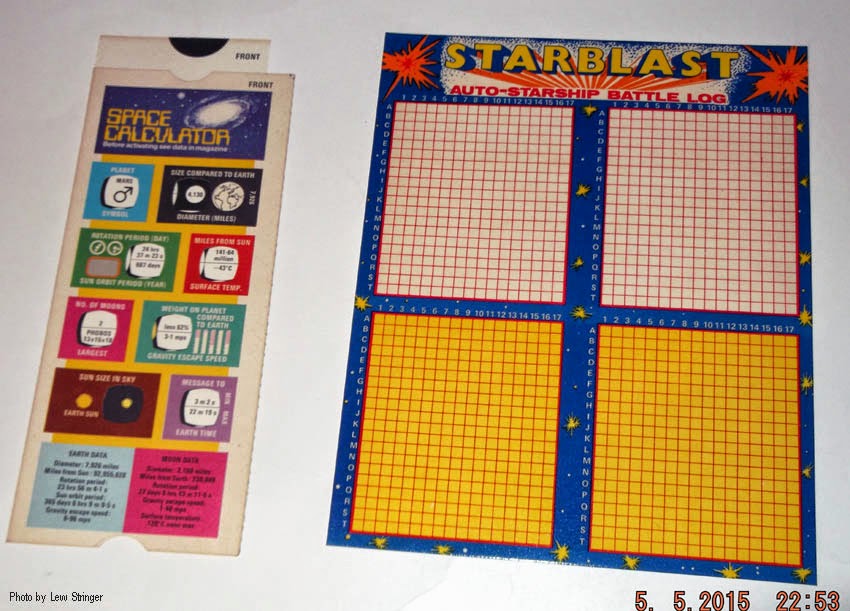 For more information on the background of Starlord comic, check out the book Thrill-Power Overload by David Bishop and, if you can find a copy, the now-out-of-print Beyond 2000AD from Hibernia Comics.
Posted by Lew Stringer at 00:01

Great stuff Lew, Starlord really was great.
On the name R.E.Wright, Pat Mills wrote the first episode of Planet of the Damned, but didn't write the rest, R.E.Wright would appear to be an Editorial name. The only other time it was used that I know of, was in Wagner's Walk in Tornado, and Pat Mills had nothing to do with that.
Beyond 2000AD is out of print, but if anyone wants a digital copy point them in my direction Lew, and Ill sort something out.

What a great comic this was! Definitely the better of the 2 at that time. Perhaps the merger should have gone the other way and it should have absorbed Dredd from 2000 AD?
I only bought the one issue, I now wish that I had them all and the specials and annuals as well!

David, if you're reading this, I've sent an email to your digital page about a PDF of Beyond 2000AD.
Cheers.

I think 2000AD was always the stronger of the two comics John, and IPC's policy was to usually keep the older title going in the event of a merger. (With exceptions of course, such as when Knockout merged into Valiant.)

In the end though it was just cheaper to keep 2000AD going than Starlord due to the production values.

I think the name RE Wright was also used on some episodes of 2000AD's original Flesh series, which makes me think that it was Kelvin Gosnell and not Pat Mills. Was Planet of the Damned intended for another title originally?