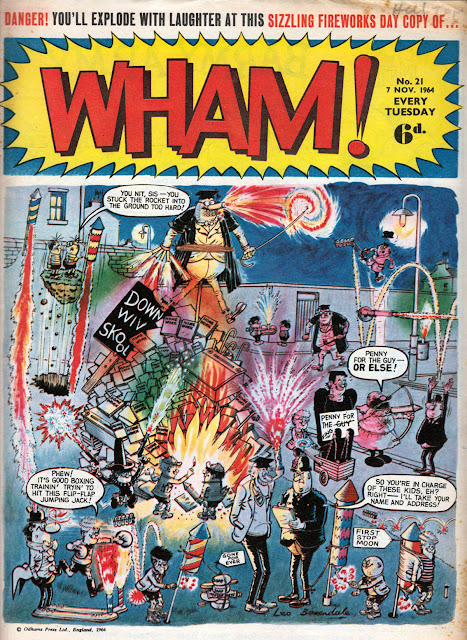 Wham! was such a great comic in its early days. It was diluted somewhat later in its run with a reduction of colour, a change to newsprint, the loss of Leo Baxendale and the addition of Marvel reprint, but in its first few years it was incredible. Perhaps not quite the 'Super-Beano' that Baxendale had intended it to be, but still the funniest comic on the stands at the time.

Here's a few pages from Wham! No.21, when the comic was in its prime. It's the first firework issue of the comic and what a fantastic cover by Leo Baxendale! Complete anarchy with fireworks flying around recklessly. There's no way you'd see something like this in a newsagents today. It'd cause a public outcry and claims of irresponsibility. But back in 1964, everyone took it for the bit of fun it was intended to be.

This issue had a packed 24 pages of strips, most with a fireworks theme. Here's The Wacks, drawn by Gordon Hogg... 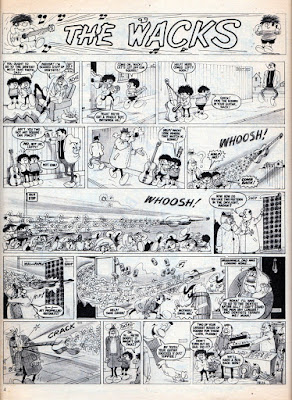 There are seven pages by Leo Baxendale in this issue, including The Tiddlers. In these early strips, the teacher, 'Super Sir', was a pal of the pupils, often joining in with their unruly antics. Super Sir was sadly later replaced by a more traditional teacher type who was in opposition to the kids. 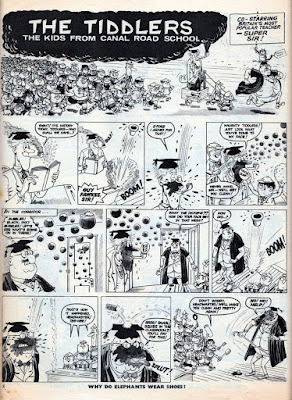 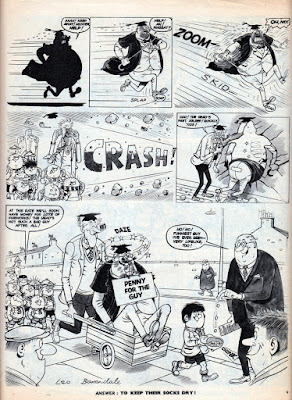 The full-colour centre pages show how Leo Baxendale used the photogravure printing to its best advantage with a build up to a big painted fireworks explosion. 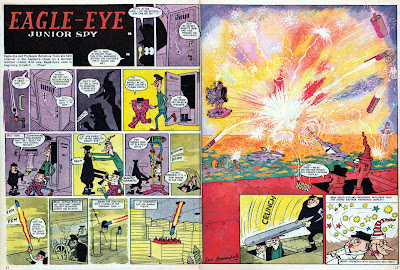 Oddly enough, the Frankie Stein episode that week had no fireworks reference. However with Ken Reid artwork this good I couldn't leave it out... 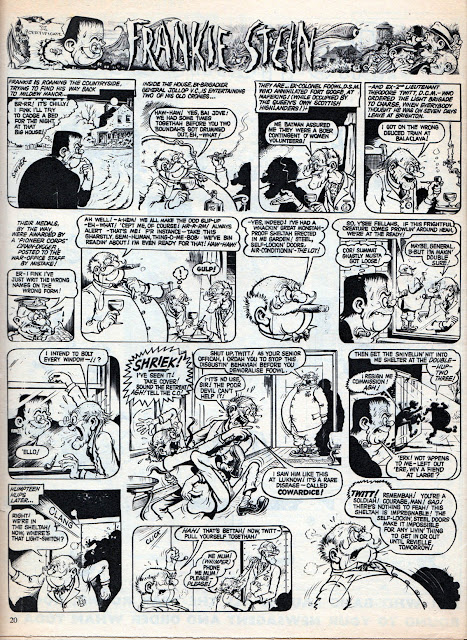 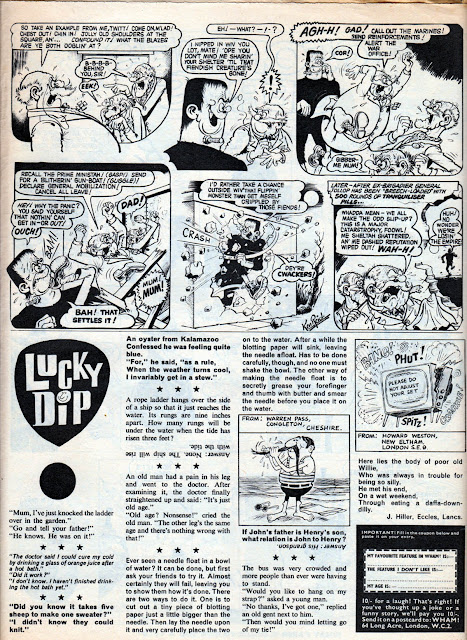 Baxendale rounds off the inside of the comic with a simple but effective Georgie's Germs strip with more fireworks fun. 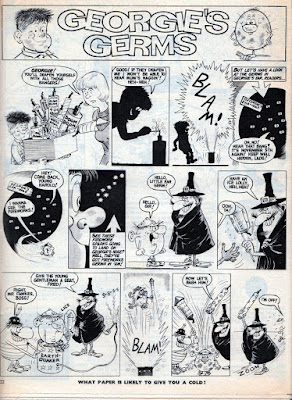 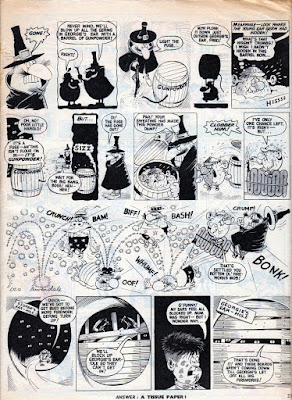 ...and with this post I'm taking a break from blogging for a short while. I have deadlines and a few other things to deal with over the next few weeks but rest assured that Blimey! will feature new posts before too long. In the meantime I'll continue to update my art blog with any news of my own work. (You do know I have two blogs I presume?) http://lewstringercomics.blogspot.co.uk/

Happy Halloween and have a safe Bonfire Night next week!
Posted by Lew Stringer at 01:02

something I've wondered for a while.. Leo Baxendale created wham!.. did he go to Odhams and say "I want to create this comic in this style and you are going to do it" and they said yes? even for someone like Baxendale, it seams like they must have had a lot of faith in him..

Top notch blog, has been for years, eagerly await its return when your time allows!


Manic, I must dig out Leo's autobiography but if I remember correctly Odhams approached Leo to create a comic. His idea of a 'Super Beano' was to use several Beano artists but for various reasons in the end only Ken Reid joined him, necessitating Odhams finding other artists such as Gordon Hogg, John Burns, etc. Personally I think it turned out OK as Wham! had its own identity and was still brilliant.

Would make sense for Odhams to be the one that had the idea FOR a comic, but then Baxendale come up with the idea for what to make that comic like.

While a lot of the time, the content in various comics was good, I sometimes felt that there was (at least at first) too much cloning.. A strip about rowdy kids at a school was popular, so each comic did a version. After a while, these clearly had there own ID, and a good clone is till good ^_^ from what I've read of Wham!, it was a good strong comic in it's own right, which is good. Sometimes the plan fails and you get something better or just as good.

Sadly it didn't sell as well as it deserved to but it was a very busy and competitive industry in the sixties. It ran for three and a half years though, which isn't bad compared to some comics.

Fantastic cover, if that didn't sell the comic there was no hope for it!

Yes, perhaps they should have featured more covers like that instead of having a strip on the front cover. 'Biff' was never their best character to be a cover star.

Good point about the covers. That may have been one of the reasons I bought Smash! religiously each week for six months while ignoring Wham! The younger paper just seemed more vibrant. It was seeing the early Smash! covers again on eBay that prompted me to re-collect the title. I believe you did a feature on the sheer variety of the pre-Batman issues a couple years ago.

Memory's hazy but I think I only started reading Wham! when the FF reprints started - so probably late summer '66 and far past it's glory days. But I did my bit to keep it afloat by purchasing it every week for the last 70 issues or so - although at the time I thought it was the weakest of the Odhams titles.

I do like what you've shown of those very early issues though. 50 years on it looks like it was one of the great lost comics of my childhood.

Yes, I think by the time Smash! was launched in 1966 it was definitely the better of the two as it seemed to have more variety and life to it. I started reading Wham! at the end of 1965 so just caught the last of it in its prime. I think I gave up on it in early 1967 to buy Pow! instead. I have most issues of Wham! now though, and all of the companion titles.