Here are the covers to Panini's revamp of their Marvel Collectors' Editions. As noted the other week, now that they're featuring the post-Secret Wars stories, they're re-starting most of their comics with new volumes. 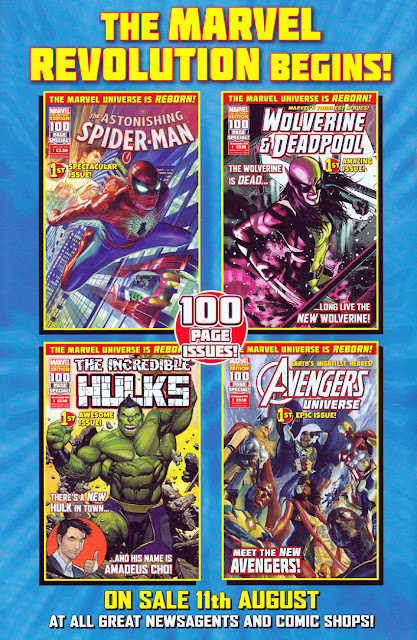 So far, it looks like The Mighty World of Marvel will be the only one to continue its current numbering, with issue No.29 on sale 25th August, the same day as Essential X-Men (Vol.4) No.1. 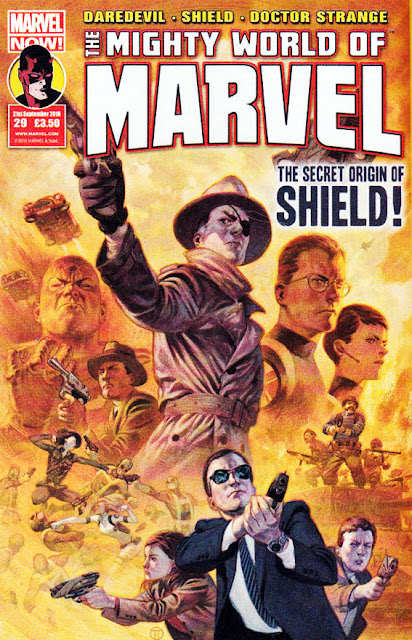 These comics also bring the reprints closer to their original publication date, with most stories only a year (or less) behind the American comics. With each issue containing 100 pages (settling back to 76 pages with the second issues) there's never been a better time for new and lapsed readers to jump on board.

The reason MWOM kept the old numbering is because they're still running pre-Secret Wars material. MWOM 29 includes SHIELD vol 3 issue 9 (I identified this from the cover). There will be three more issues remaining in that volume. Daredevil vol 4 #16 is in MOWM 28 (source: Panini's website), and there are two more issues left in that volume after that. MWOM 28 also has a classic silver age Doctor Strange story, so I guess that's the case in 29 as well. If they don't skip any of the remaining SHIELD or Daredevil issues, they'll probably relaunch after issue 30, in October.

I think the reason MWOM is keeping the old numbering is also due to cash in on the Doctor Strange movie as previously mentioned here. Ever since MWOM came back over a decade ago, it's always (semi) tied itself to the movie launches. Vol 3 - the first of Panini's era - launched for the early 2000's Daredevil and Hulk movies, to the most recent Vol 5 launch tied into Guardians of the Galaxy (and occasional specials when it suited - A Silver Surfer ish when FF 2 launched) and going everywhere else in the House of Ideas inbetween.

The timing as James points out works out pretty fine in terms of an Oct launch for a Nov Doc movie - they have already said they won't carry on Daredevil past the end of the current Waid arc, and looking at the letters page of today's ish it looks like (for now) it's the end of the Silver Surfer as well. They have confirmed all new Doctor Stange for the - presumed - relaunch. Looks like they are sticking with Shield for a while so I wonder what the third slot will be. Yet to see how well Ms Marvel was recieved - looking at Marvel's movie slate coming up, perhaps a return for the Guardians or perhaps Black Panther...?

Talking of movies, I wonder how well Panini's Civil War CE has done. Ish 5 (of 7) on sale today and seems to sell well in all WHSmiths round here. Wonder if they will be tempted by more limited runs? Seems to be more considered than Titan's ad hoc approach. (Note, Suicide Squad #2 today has an arc running into Harley Quinn #2 - odd for a limited series, but unlike Titan it does promise Suicide Squad #3 will be here next month!).

Sorry for the ramble, keep up the good blogging Lew!

Thanks for commenting, Chris, and James. Black Widow will replace Daredevil in MWOM soon, so the new line-up will be Doctor Strange, Black Widow, and perhaps SHIELD.

I commented last week that my local Tesco doesn't sell the new Comic Heroes magazine - I was wrong, they do !!! But I only saw it by accident as it was on sale in a completely different place to SFX, Sci-Fi Now, Doctor Who Magazine etc - what's the thinking behind that ??? And Fortean Times which is in a similar vein to the aforementioned magazines is on sale in yet another section. But at least I got to buy Comic Heroes - the article on Captain Britain was a pure nostalgic treat. Hard to believe it'll be 40 years in October since CB #1 came out.

Looking forward to all these (very rare for me to buy original US issues).

I really hope Titan can one day harness the professionalism, foresight and planning of the Panini CE editors.

It must give Scott Gray and Brady Webb headaches at times, making everything match up. And, poor Brady, how's he gonna fit TWO Iron Man comics and TWO Cap comics into one 3-tales-a-month reprint series?

You're right, Stephen. Scott and Brady do a great job on their comics. Yeah, the extra titles pose a problem but perhaps they'll just focus on the regular characters. After all, they don't reprint all the various Avengers or X-Men comics.

Glad to hear you've picked up Comic Heroes, Colin. As for shelf positions, it seems to be up to whoever sets up the display that day, rather than paying attention to the publishers. Even though publishers pay thousands for shelf positioning they don't seem to take action against shops when they're told they're not doing their job.