COMIC HEROES for the Autumn 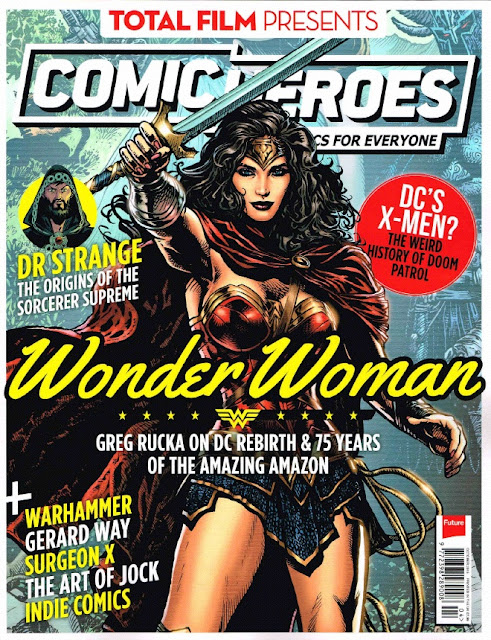 Apparently there's a new issue of Comic Heroes, the magazine about comics, out today. It exists, as I know people who have copies, but unfortunately, after spending five hours trying to track a copy down in three different towns, I've been unable to find one. Coventry's Forbidden Planet tell me they won't stock it, which is crazy when customers are willing to buy it, and WH Smith were completely clueless, saying they hadn't seen a copy for months (even though I'd explained twice that it was a quarterly and I always buy it from there).

Anyway, there's the cover above. My thanks to journalist Sean Egan for sending me the image along with a PDF of the article he's written for the issue, which is a lengthy feature on the history of Marvel UK. (A good read, although it is strictly about Marvel UK so don't expect to find any info on the period where Panini UK were creating brand new Marvel superhero material. It's also solely about superheroes, so no mention of Combat Colin or the numerous non-superhero strips that used to be read by 200,000 readers a week.) 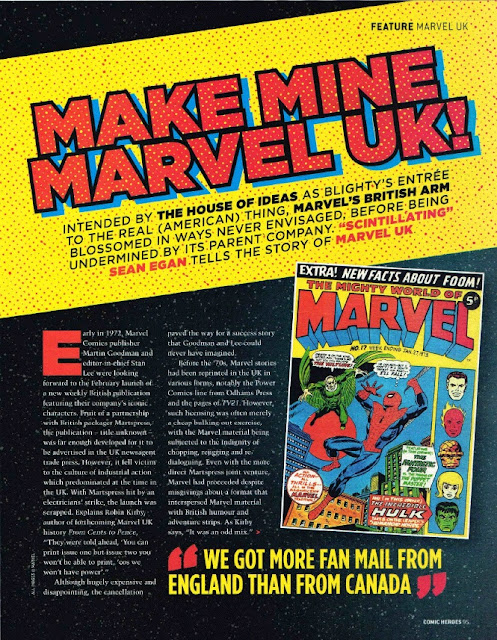 No doubt there's lots of other good features in the mag too, and if I had a copy I'd tell you about them. Happy hunting!

The poor distribution of this magazine highlights a very important issue about comics in this country. A comic or mag can only reach its potential readership if shops are willing to stock them. The cancellation of a title isn't always down to content. You can have a great comic/mag but if no one can find it, it's doomed. My questions are; how are publishers addressing this very serious problem? Are they addressing it? What sort of PR do they send to shops to encourage them to order copies? (Do they send any PR out, or do they just hope a retailer might glimpse a little mention of it in their copy of trade mag Retail Newsagent?) Are copies actually reaching the shops when they are ordered, or are they sitting in a warehouse undistributed?

Comics and magazines can only be saved if publishers and retailers work together to ensure they benefit each other and their readers.
Posted by Lew Stringer at 18:50

Hi Lew I found this issue and back issues on Readly they have a trial period and lots of other magazines to read.

Thanks, Jeff. That should be useful for some readers but I'd rather support the print edition. I can't see how publishers can make much of a profit from Readly, but I'm happy for someone to prove me wrong on that.

The previous issue of CH was in my local Tesco but for some reason it was in a completely different place from similar magazines like SFX and I only discovered it by accident. Next time I'm in Tesco I'll have a really good look for the latest issue. But I agree the distribution of comics and magazines is bizarre - for example my local Tesco sells The Beano and Viz but not 2000 AD or any Panini comics.

Only had the previous issue of CH in our WHSmith. I usually have problems picking up a copy, thought it was just a problem in our area. With that cover price, you'd think that the distribution would have been nailed down.

I used to buy every issue from my corner shop. Guaranteed sale, but they stopped having it. Local Smiths stopped have it too, despite it selling well. Then I had to travel to the nearest city to buy it. Now they've stopped having it. I really don't understand why they do this. They seem to be at the mercy of suppliers who decide what they should stock, regardless of whether it does well or not. Same applies to Beano and 2000AD which also suffer from poor distribution in the Midlands for no good reason.

Just got a copy from wh Smith in southend. They had 3 in there

That's good. Still none around here unfortunately, and shops won't order it either.

Varient alert! The cover on your post pitches the new issue as a TOTAL FILM spin-off but the copy I bought from WHS at the weekend makes no such claim.

I also spotted a version of the current issue of CRIME SCENE magazine that also claims to be a TF spin-off. I saw that version in a branch of Asda. My copy, purchased from WHS, doesn't have the same masthead.

I assume Future are testing to see if they shift more copies by emphasising the faux connection.

I have seen it in Sainsburys but I am down in Surrey by Morden/Wimbledon. Thimk ot is stocked at Tesco too.

Still no sign of it around here. Retailers just shrug. Waste of time.

Got my copy. The white font on black background used for the Marvel UK history was unreadable on a couple of pages. The Megazine has a habit of making the font/background colour mix hard to read on articles and interviews. I can understand why the editor wants to make the mag look fresh and funky but it bugs the hell out of me when I buy a mag with that problem. Reading it slooooooooooow to make sure my £ goes further!

I bought a copy from Nostalgia and Comics in Birmingham last week. Still no sign of it in Smiths, which won't do sales any good.