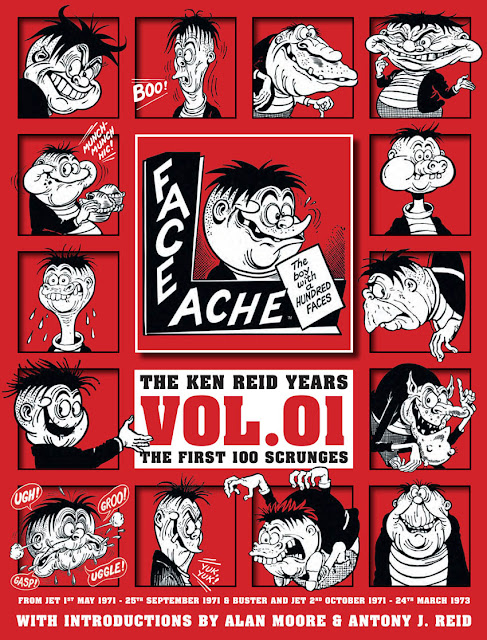 What better book to preview/review on Halloween than Rebellion's latest offering that will be out at the end of next month? Faceache: The First 100 Scrunges brings us a fine collection of the first couple of years of Ken Reid's marvellous Faceache strip. We get the complete run from Jet plus the early Buster and Jet appearances, taking us from 1971 to 1973. 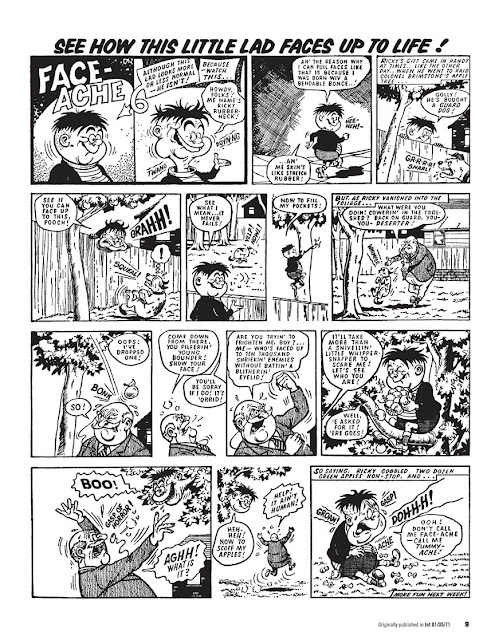 I think it's important to point out that Faceache did have a few fill-ins during this period, and they're included too. A total of 17 pages are clearly not by Ken Reid, but by Barrie Appleby (uncredited). I'm not sure why Rebellion felt it necessary to include the ghosted strips as they're not part of any continuity, and they feel a bit out of place in a book sub-titled The Ken Reid Years.
Still, focusing on the positives, we have lots of glorious Ken Reid pages reproduced very sharply and cleanly, with Ricky Rubberneck (Faceache's real name) gurning into increasingly bizarre contortions throughout a succession of brilliant slapstick situations. Personally, I think Ken's work was at its peak during the 1960s when he was freelancing for Odhams, but Faceache is amongst his best work for IPC and it's great to see it collected at last. 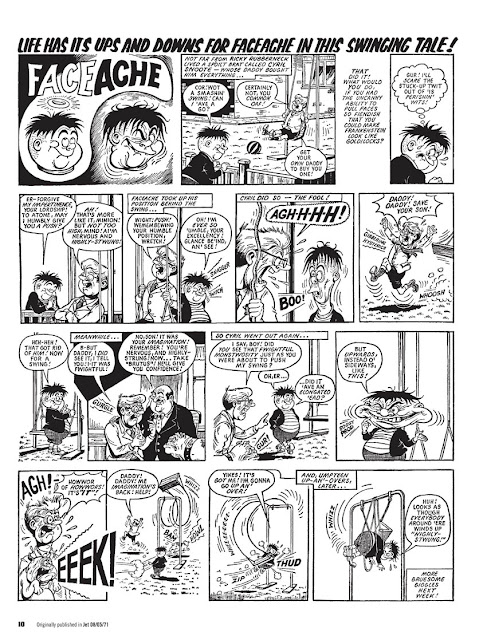 The book has two introductions; one by Alan Moore, which is guaranteed to bring the book to the attention of people who might otherwise ignore it, so that's good, and one by Ken's son, who reveals some behind-the-scenes anecdotes that are a touching and worthy addition to the book.

The book ends with a nice reveal of another Ken Reid book coming soon, which will be wonderful to see. I'll say no more. I hope there'll be another Faceache collection too, as the character, and Ken Reid's work, deserves a place on every comic fan's bookshelf. In British comics, producing humour strips sometimes feels like working in a ghetto within a ghetto, and so much material has been ignored or overlooked by fans and pros alike, so it's admirable that Rebellion are acknowledging one of the finest and funniest humour artists the UK has ever produced. Treat yourselves for Christmas to this marvellous first volume and let's hope there'll be many more! 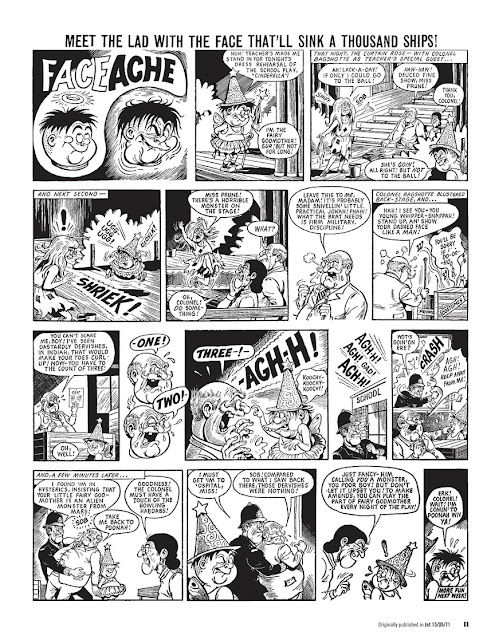 Hilarious face-changing adventures by one of the greats of British comics! Ken Reid is consistently name-checked by the greats of comics - from Alan Moore to Kevin O'Neill, John Wagner to Pat Mills - for his unique art that is matched only by his enduring sense of humor. In a hardcover edition befitting his status as one of the all-too-forgotten greats of British comics, we present his timeless Faceache - the humorous adventures of Ricky Rubberneck, the boy with a "bendable bonce" whose skin stretches like rubber. At will, he could scrunge his face into anything, whether it's mimicking others or turning into grotesque creatures, but always coming a cropper! This is the first collection of this long lost classic from the hugely popular and long-running Buster comic.

Available in print from: book stores, Amazon, and comic book stores via Diamond

Will be getting this..
Not seen any of the other books in Waterstone except one eye...have you seen them in the shops Lew?

What a tease But good news there will be more books on Ken Reid...

This is the one I've been waiting for! The adventure and horror stuff is all well and good, but the humour strips are what this chap thrives on.

Having the work of other artists makes sense as it's a Faceache collection, rather than purely a Ken Reid one. I see it as a positive; cut out those other strips and the collection is incomplete.

And another Reid book in the works? Let the speculation commence! An oversized coffee table book of World Wide Weirdies is high on my wishlist.

Well, I can't say I'm happy about "The Ken Reid Years" having 16 pages not by him as I wouldn't expect a book on Jack Kirby to feature strips by John Buscema, but I see how completists would be happy with it.

EEEEEK! thats a squeal of delight from me - excellent stuff ( I agree the 16 pages by another artist is a strange additon re the title)

I could be wrong, but I get the impression they didn't know it wasn't all by Ken until the last minute, as the only indication is on the contents page. Hopefully they'll make sure for future volumes as British weeklies have featured a lot of fill-ins over the years.

That makes sense. Was going to write that the subtitle described an era of the strip, then realised (well, Googled) that he drew it for most of its run. If you'd asked me prior to Googling, I'd have sworn that Frank McDiarmid took over the reins a good ten years earlier than he actually did.

Yes, Ken drew it until his death in 1987, so there's a lot of books to fill! HIs later work wasn't as lively or manic though. I think he lost heart somewhat when the editors stopped him writing his own material.

Hello everyone - I'm the Faceache editor.

I just wanted to let everybody know that we were well aware of the fact that there were non-Ken illustrated FA strips. In my opinion it is better to include everything rather than carve out bits of history. We made it very plain on the cover that this book contains the first 100 strips. That's 84 strips of glorious Ken Reid artwork! Ken is, of course, synonymous with Faceache and the major draw for this title, but I feel that it would be unfair to remove the other artists' work who so valiantly filled in the odd week when Ken was predisposed.

For future reference, we will also be including non-Ken Reid illustrated pin ups in both Creepy Creations and (further down the line) World Wide Weirdies.

Thanks Keith. If you need any help identifying ghost artists of humour strips so they can be credited in future books, let me know and I'll see if I can be of any assistance.

So is it creepy creations you were alluding to lew.if so that's not much to read and id still rather frankie stien and jasper the grasper collections.and yes the completist in me wants to see all the strips ghosted or not

Kazoop is brilliant in his knowledge on Ken Reid...

The comic artist books are the ones i'm looking forward to the most..
Hope you do a Reg Parlett one...there are so many comic artists worth doing J.Edward oliver..Tom Paterson...Leo Baxendale..Ian Knox..Frank McD..

You've really made my dream come true.. so well done getting the rights..

Irmantas of the Kazoop blog gets a special thanks in the Faceache book, Peter, so they're already aware of him.

Hi Brian, Rebellion can't publish Frankie or Jasper as they're owned by Time Inc at the moment unfortunately.

Appleby’s contribution to the Rubberneck saga doesn’t bother me in the least, for two reasons: I’m one of those completists you mentioned, and Appleby seemed to later copy Reid’s style for DCT. I might have mentioned this before, but Curly’s Commandos in Cracker seemed to feature Faceache lookalikes which was probably a deliberate move on the Scots’ part to compete with Reid’s excellence; if they didn’t know how brilliant he was, no one did. Roll on the Belmonte School days!

I'll pass as I already have the bootleg Faceache book but hope to see more from Treasury of this ilk!

You won't see more unless you support them instead of that "bootleg" crap.

If they knew Mr.Appleby had drawn 17 pages why didn't they credit him?

Perhaps they were unsure, but it would have been easy enough to check with me or someone.