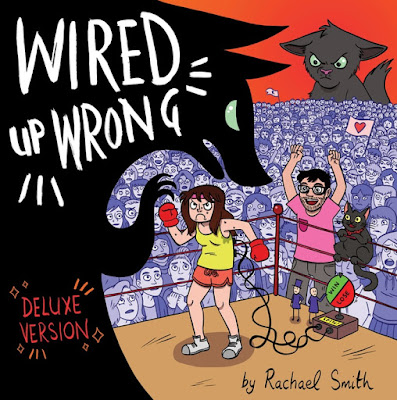 Last year, artist/writer Rachael Smith produced Wired Up Wrong, a 40 page anecdotal comic about her dealings with depression and anxiety. Rachael handled the subject in a humourous and inspiring way, and I reviewed the book here:
https://lewstringer.blogspot.co.uk/2016/11/review-wired-up-wrong.html 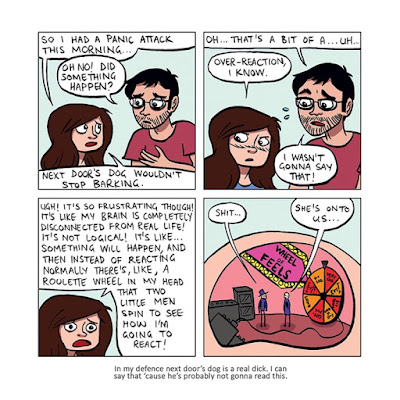 It sold out fast, and Rachael is now producing a deluxe version which will have 100 more pages! I've long been a fan of Rachael's work as I think she's one of the best new comics creators of modern times, so this sounds like a good deal to me. A Kickstarter campain has launched today to help fund the book, and you can find all the info at this link:
https://www.kickstarter.com/projects/flimsykitten/wired-up-wrong-deluxe-version

I've backed it, and I hope you will too! 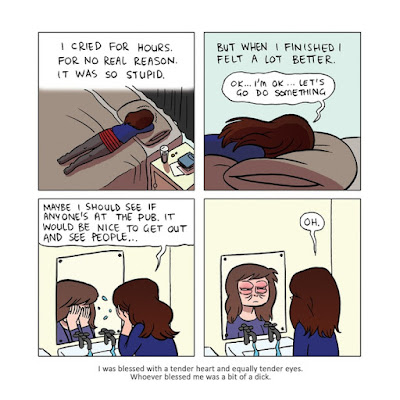 See more of Rachael's work at her website here:
http://www.rachaelsmith.org
Posted by Lew Stringer at 12:09

As a depression sufferer (and this year has been hell a number of times with a mix of very close deaths and stuff), I loved the first volume.. but i'm always put off from Deluxe versions. Okay, sure, 100 new pages. great. But my mine says "you paid X for the first volume and you want to pay more for the same Plus extra? wait till you are in a better place for this". Kinda like there are some deluxe DVDs I would like, but I have the 'earlier' release which is perfectly fine so it seams a bit of a waste for me personally to buy yet another copy.

okay, that said, this does seam like one of these ones which is worth it and there is well.. I think that new content is MORE then the original stuff repeated.. but with things like Kickstarter... I've only been tempted to support once.. and that time, there were able to give another option which was much more to my liking. So I'm gonna have to say sorry Ms Smith, loved it, but I'm gonna have to wait for a little bit.

I hope it does well though.

There's 100 extra pages so you're getting a whole lot more, Ryan. There's no pressure, though. The Kickstarter is doing well, and had reached 80% in 24 hours last time I heard.

yeah, I know it's worth it but it's still a case of the difference between knowing it and KNOWING it ^_^

and that sounds great it's doing so well