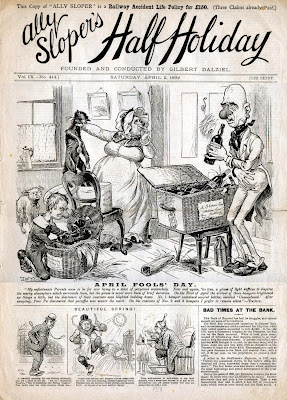 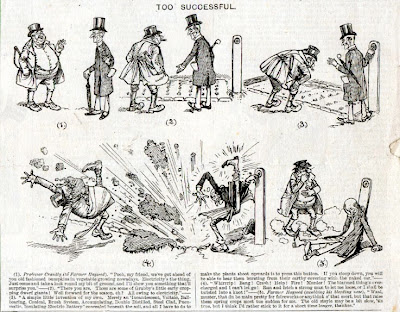 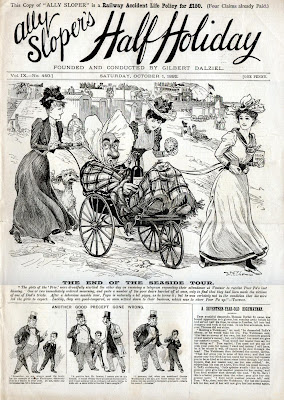 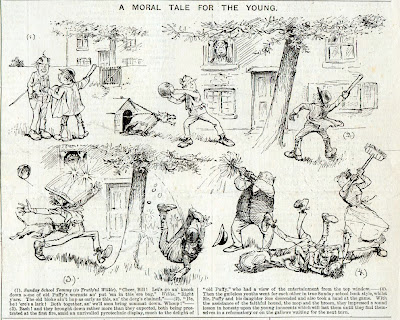 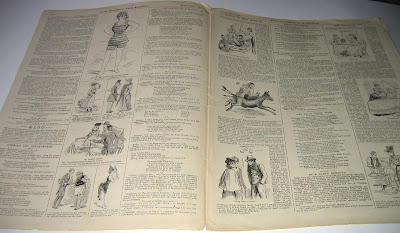 The first thing that struck me about the above April Fool's issue of Ally Sloper's Half Holiday was: Was sending someone a dead cat ever funny? Yet cruelty seemed to be commonplace in this publication, and racism too.

Those were different times of course. The year was 1892, a society which when compared to 2007 would seem like another world. One benefit of collecting old comics is that they give us a glimpse into the past, sometimes warts and all.

As every fanboy knows ;-) Ally Sloper is, according to the late Denis Gifford's International Book of Comics, the world's first recurring comics character. Although I must admit that within the pages of the two issues of Ally Sloper's Half Holiday that I have, Ally doesn't actually appear in a strip himself. Instead, he reigns supreme as the cover star, and there are some witty short text anecdotes about the character inside.

Ally himself was a somewhat bawdy, boozy character, his name deriving from Victorians who "sloped" off into an alley when the rent collector was due. (A sort of 19th Century Andy Capp in respect. Also, as you can see from these covers, Ally was accompanied by his dog, predating Dennis the Menace and Gnasher by decades.)

This was an adult "comic". I use the phrase in parenthesis because the amount of strip material is minimal. Most of the 8 black and white pages are taken up with social and political items in solid text broken up with cartoons and a few short strips (some shown above). Similar in a way to the ratio of strips to features in some of today's UK comics. That said, it's closest descendant today would be Private Eye rather than Toxic. Nevertheless, Ally Sloper's Half Holiday was a major player in getting the ball rolling for the British comics industry.

The strips shown here seem very basic compared to today's comics. Yet what they display is true sequential art, and slapstick situations that still influence UK comics to this day. (Comics are a perfect genre for slapstick.) You'll notice that the strip A Moral Tale for the Young ends with the two mischievous boys receiving corporal punishment; a conclusion that would be repeated countless times in British comics for decades after. Here, the administering weapon isn't the cane or slipper of 1950's Beano times though; "Mr.Puffy" and his daughter lay into the kids with a mop and broom! The punchline: "...a sound lesson in honesty upon the young innocents which will last them until they find themselves in a reformatory or on the gallows". Blimey! And they call Judge Dredd pessimistic.

Unlike today's British comics, there were no free gifts taped to the cover of Ally Sloper's Half Holiday. No free whoopee cushions or League Ladders. Instead, those fun-loving Victorians gave away... a Railway Accident Life Policy for £150. Great News Chums! If you have a fatal accident on a train, and your cold dead body is still clutching that week's copy of Ally Sloper your next of kin will receive £150. Fun-tastic! (Okay, it wasn't exactly phrased like that but this is for real. See the actual notice above which ran on page two of the issues.)

Anyway, enough from me. Relax and take a look at the 115 year old artwork above, at W.F. Thomas' fine pen work on the front page Ally cartoons, and at these early examples of the genesis of British comic strips.

Sturdy historical stuff. I first ready about Ally Sloper in the Penguin Book of Comics (second edition published late '60s, I think)--the first book on comics history I ever owned and still have--which I got for Christmas when I was about 13. Denis Gifford also wrote about the disreputable Mr. Sloper, and, of course, briefly published (was it one issue or more?) reviving that name in the 1970s.

Yes, I must cover that 1970s four issue run of Sloper here some time.

The Penguin Book of Comics (1971) was the first book on comics history I had too! I was completely fascinated by it and it kick-started my interest in UK comics' history.

That's great. That book kick-started my interest in comics history, too (previously I had read some articles here and there in comics themselves, but not a whole book.) At one point I wrote to the author, George Perry, about some project I had conceived (but never got around to starting) and he gave me permission to quote his material. Mr. Perry was, if I recall correctly, a writer for the Sunday Times magazine.
Every Christmas for several years after that I requested and received a different book about comics history as a present.
I have the first issue of the 1970s Ally Sloper comic, which was sent to me by a friend. By then I was living back here in the states. (In fact I was in Army training at Fort Sill, Oklahoma.) Would like to see you cover that comic on your site.

Thanks for your piece on Ally Sloper. I'm interested in its First World War years, if anyone has any info.