Classics from the Comics 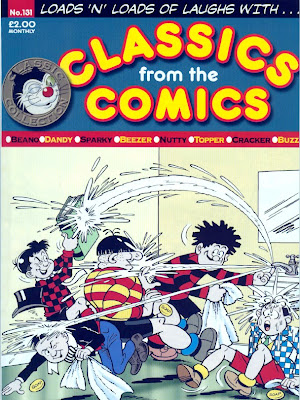 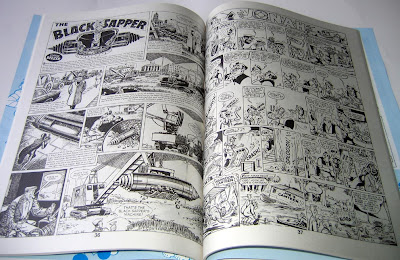 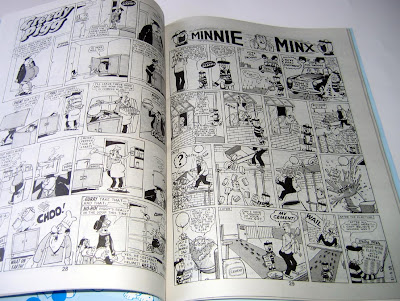 Classics from the Comics, which is published on the last Thursday of every month, seems to be one of D.C. Thomson's most popular secrets. Like Fun Size Dandy and Fun Size Beano it is rarely, if ever, advertised in the weekly Dandy and Beano comics and its distribution is patchy to say the least, yet it has still managed to survive for over ten years.

For those who have never seen a copy (for so few newsagents appear to stock it) Classics from the Comics is a 68 page monthly reprinting strips from Thomson's old funnies: Sparky, Topper, Beezer, Buzz, Nutty, Cracker, and of course Dandy and Beano. Most of the stories are approximately from anywhere between 1959 to 1987, which means the collections often include gems from Leo Baxendale, Ken Reid and Dudley Watkins. (The current issue, No.131, features Baxendale art on Minnie the Minx and The Banana Bunch, plus three pages of Ken Reid's Jonah.)

A few months ago Classics gained a new editor, bringing in a bold new logo and cover design and a chattier editorial page. Readers are also encouraged to send in their suggestions for reprints and, as I imagine many of its readers are nostalgic adults, it's little wonder that strips from the 1960s and 1970s dominate.

If there's a criticism I'd level at Classics it's that often serials aren't run in chronological order. For example, they'll be a Winker Watson strip one issue, which is part of a "Winker's brother on the run" story, but the next issue might feature a Brassneck story instead which comes in half way through a serial about the robot boy being controlled by the school sneak.

This is only a minor criticism as at least the individual chapters of those serials are complete stories in themselves. What is pleasing is that currently Classics from the Comics is reprinting the 1959 Black Sapper serial (by Jack Glass) from The Beezer in full, with three chapters per issue.

For just £2.00 an issue, Classics is a bargain. Within its pages are some of the finest slapstick comedy strips D.C. Thomson ever produced. Artists such as Davy Law (Dennis the Menace); George Martin (Greedy Pigg); Eric Roberts (Dirty Dick) and Tom Bannister (Colonel Blink) all in their prime. For older readers it's a trip down memory lane but for new readers it's an education into the history of British humour comics.

I wish they would go even older than 1959..though that is the year they started filming the page on to film.

It would make sense to tranfer the older comics from paper on to film now...it would be a real buzz to see older material.

I like seeing the black sapper in order...also the whizzers of oz...I hope we can have more of these...reading these adventure stories makes me miss it in todays comics...I'm sure strips like the iron eater...the red wrecker..the great flood of London...would just be exciting to read in a updated story and style with todays kids...
I hope Beano Max will hjave an adventure strip..

Yes, it's a shame publishers decided adventure strips no longer had a place alongside humour comics. I'm sure it could still work with the right strip and right people on it.

Yes i've always wondered about Thomson's poor distribution. I buy the Weekly News each week but know of only two newsagents who sell it. My Tesco stocked it until last year. Also Commando of course which you have to subscribe to. I saw Classics from the Comics in Smiths at Lewisham SE London and really liked the new look. I sold the first 75 issues on ebay last year to make space. They were expendable. I think they sell it at Smiths in Waterloo station as well.

Yes, distribution of Thomson's comics seems to be at the whim of the distributor. Currently, Commando is sold in two newsagents in town here (Midlands), one of which is Smiths. Classics is available in another shop. No Fun-Size books at all. And The Dandy is getting very hard to find too.

Well, the fun size comics are no real loss, since they're reprinting the first ones...

Smiths in Belfast doesn't do Classics, but Easons down the street does. I can't remember who distributes to whom, maybe Easons to Smiths.

Thanks for the info Andy. I didn't know Fun Size had gone reprint.

Perhaps if they'd actually advertised it they might have sold more copies and the budget wouldn't have been cut!

In addition to U.S. comics and their UK reprints (I preferred the superhero genre above all else) I used to read Beano, Dandy, Beezer, Topper, etc. while I was growing up in England in the 1960s and early 70s (from about age 8 to about age 18.) In the past few years I have received Classics From the Comics as Christmas and birthday presents from my mother, who still lives over there. After all this time (now I'm --ulp!--51 years old) I have more appreciation for the British kids' comics genre, which dates, I understand, from the turn of the 20th century but seems to be disappearing.

I was an aspiring comics artist in those days (In recent years I have sold a few gag cartoons to magazines) and one of my prized possessions was a letter from Denis Gifford, the (now-late) comics artist/writer/historian, whose books told me much about the classic UK school-humor genre.
(Sadly, the letter--and the drawings I had sent him--were thrown away decades ago)

Mike Mittelstadt, Watertown, NY (way up near the Thousand Islands close to Canada)

this month's issue was pretty good; lots of 60s stuff, and a focus on Davy Law and DTM. Instead of the Dennis portrait some trivia/sketches would have been nice. However thats a VERY minor gripe this is an excellent effort from DCT

I've noticed "Classics From the Comics" is on sale now every month in WHSmith - displayed quite prominently in the Brighton store but in the kids comics section.

I'm trying to cover British comics more in my blog http://cyberschizoid.blogspot.com/
so feel free to drop in and visit.

I am loving this blog and will recommend it to all and sundry!

hi editor
I have some Ouestions for you.

1.how did you come up with the name.
2.I just love the comic.
3.what is your favorouite charater

please put this in te next comic

Sorry Dayna but I'm not the editor and this isn't the website for Classics from the Comics. This is just my blog where I review comics.