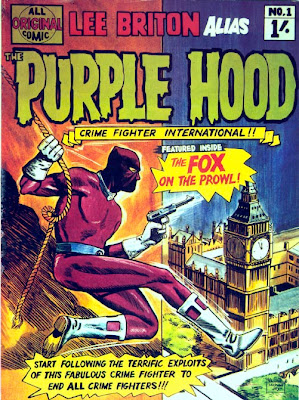 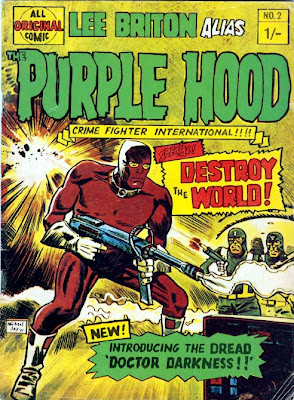 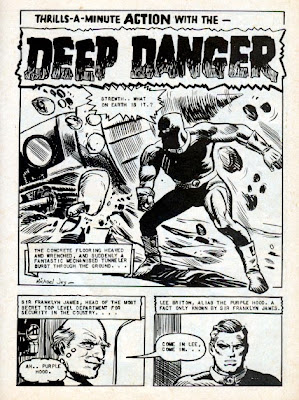 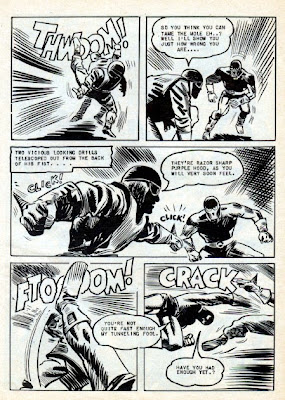 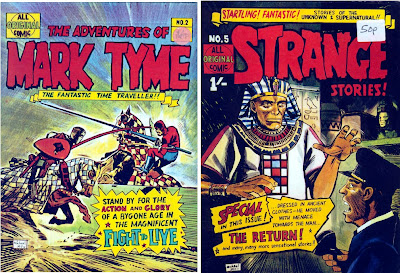 Blackpool, Tuesday 29th July 1969. Ten years old, I'm on holiday with my Mum and Dad and, being mad keen on comics, I'm looking through a seafront news stand for something to read. Holiday resorts were always good places to find comics that might not have good distribution inland. A comic catches my eye that I've never seen before: Purple Hood No.2. It's a British comic, similar in format to those Alan Class reprints, but the cover declares it's an "All Original Comic". The cover character looks intriguing; a superhero with a machine gun? The logo design is craggy and compelling. The strapline says he's a "Crime Fighter International". Sounds different and exciting. I buy it. It's too blustery to read it on the prom, so I wait until we get back to the "digs". The comic contains three long stories. The Purple Hood has no super-powers but is athletic and handy with his fists, being more like a British Captain America than anything. He's a Government agent and fights terrorists and mad super villains. The raw style of the artwork makes the comic look more like a mock up designed as a prop for a tv show rather than a genuine comic. Yet this unreal quirkiness is a quality in its favour because it is so different from comics I'm used to seeing. When I get home I look out for Purple Hood No.3. It never appears, nor do any subsequent issues. I store away the treasured unique comic, to ensure I didn't imagine it.

Almost 40 years later I'm no wiser as to what the story was behind the publication of this comic. The art throughout its 52 pages was by Michael Jay. To my knowledge, I've never seen his work anywhere else. As can be seen from the scans here, his style was quite crude and derivative, yet it had a simplicity and energy that propelled the story along. (The stories themselves were basic, to say the least.)

Several years ago I saw a copy of Purple Hood No.1 at a comic mart and snapped it up. Again, the entire contents were by Michael Jay. I also discovered a copy of Strange Stories No.5 at a mart; another Jay effort from the same era. Mark Tyme ("The Fantastic Time Traveller") was another of his comics, and I found a copy of No.2 of that in a newsagents, reissued with a 10p sticker covering the original 1/- price.

According to the indicia, these comics were published by John Spencer & Co, of London. The inside back cover of Strange Stories promotes three other titles: Macabre, Fantasy, and Spectre "Published at regular intervals". I've never seen them.

From what little information I could find, these undated comics were published in 1967 (so Purple Hood 2 had been hanging around the newsagents for two years before I bought it). Mark Tyme and Purple Hood never reached their third issues and remain Britain's forgotten superheroes. (According to Denis Gifford's Complete Catalogue of British Comics the mystery theme companion comics ran to six issues.) Presumably launched to rival American imports, these peculiar British comics never quite hit their target but they remain an interesting curiosity all the same.

Who was Michael Jay? (Was it a pseudonym?) What's the story behind John Spencer's comics? (Did he launch others?) If you have any information, or can remember these comics, (particularly the others in the series such as Macabre which I've never seen) please add to this article by leaving a comment below if you wish to.

UPDATE 27/3/2007: Comics historian Steve Holland has kindly solved the mystery of the John Spencer comics by providing background info and more cover scans of the comics line on his blog here: http://bearalley.blogspot.com/2007/03/john-spencer-comics.html

Thanks Steve! (And yes, Michael Jay's artwork may have been terrible, but as a ten year old I was mesmerized by its clunkiness. ;-))

"Britain's forgotten hero" - FORGOTTEN? I never met any reference to the guy let alone the guy himself :-)
Oh and BTW what's the name of the building on the cover of #1 that's higher than Big Ben by a mile?!
Norman

Y'know if I hadn't kept that comic I'd have thought I HAD imagined it. What an obscure character.

As for things like mile high buildings and weird perspective; the artist didn't worry about things like that. He'd got 52 pages to churn out before drawing all the OTHER comics in the line! ;-)

I'd seen that Big Ben cover before somewhere years ago and that other tall building has always bothered me! For some reason I thought it was an old Captain Britain cover that I'd seen, but maybe I saw the Purple Hood in an old Dennis Gifford book or something.

I'm also wondering where he's swinging to on a rope that short!

Perhaps we should be generous and look at the cover in another way: it's a split scene just to represent the style of the comic, with Big Ben being one picture, and the orange background being another.

Dear Sir
I have in my possession a copy of the comic, Macabre Stories #6. Whilst it is not a particularly impressive piece of work, over the years I have been trying to find out something about the publisher / other issues in this series, but to no avail. Having visited your site, and those associated, I can see why - not exactly a lot is known. For your information, I acquired my copy in 1971 as a very young lad on a holiday in Ibiza, along with the Mark Tyme comic you also display. Anyway, thanks for allowing me to find out something about this title.
All the best

Very interesting Colin! Thanks for the info. Seems those comics either hung around the shops for years and / or were re-distributed from wholesalers two or three times.

Thanks Lew
You have just solved me a 20 year old Mystery.
Both "Mark Thyme" and "The purple hood" were translated into Hebrew during The late 60's early 70's in a magazine called "Buki" (Hebrew version of the name "Buck"
As in "Buck Rogers" hero of some of the magazine stories). The weird thing is that Both comics (probably because of similar artwork) were considers the same hero.
They give him the name "Ish ha-argaman" (crimson man) and in my mind I thought That there was probably an un-translated story explaining the beard and time traveling.

If there were only 4 issues ,I probably read them all ,In Hebrew .
Thank you very very much

Thanks Adi. Seems the history of this character is more interesting than the strip!

I happen to have picked up 22 of these magazines at a garage sale. They are mostly in pristine shape, most look as if they have never been opened. Does anyone have any interest in these? nbinpg@gmail.com

I have Strange Stories 3 the man who conquered time, was in the process of putting it on Ebay when I came accross your Blog :) found it in a garage sale aswell.

Bizarrely, I bought my copy of the second issue from a backstreet Blackpool newsagent on an October 4th, 1977 visit. Yes, a full eight years later!