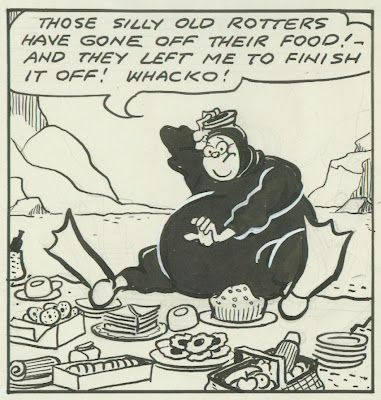 No, the bloke who played The Master in the 1996 Doctor Who tv movie isn't taking on the role of Billy Bunter. Eric Roberts was an artist who drew the Billy Bunter comic strip for a short time in Knockout in the 1950s.

Billy Bunter first appeared 100 years ago, and his Centenary was yesterday (since the story paper The Magnet No.1 introduced him to the world). I confess I know very little about the character outside of the Reg Parlett strips that ran in Valiant for years, and a vague memory of the Billy Bunter tv series. (Adult actors dressed as public schoolboys. Very strange.) More info on the character can be found on Wikipedia assuming it's correct.

The strips shown here are from Eric Roberts' original artwork. Roberts is better known today as the artist who drew Winker Watson and Dirty Dick for years in The Dandy, but in the 1950s he was freelancing for the Amalgamated Press. I'm not sure how many Billy Bunter strips he drew. It's likely he was just a fill-in artist. (Update: He did more than I assumed. See comments below.) 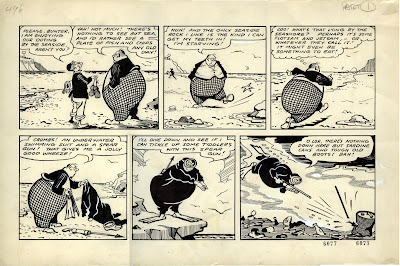 I've always liked the work of Eric Roberts. It's true that his characters seem a bit limited in design (look how his Mr.Quelch looks exactly like Mr.Creep of Winker Watson fame) but his bold brushwork and use of blacks appealed to me. The strip you see here was drawn in three half pages. (There may well have been a fourth, with the title affixed perhaps, but that has been lost over the years I imagine.) I've scanned in the entire half page that Eric called "Part 1" (above) and segments of the other two halves for you to study his work here. 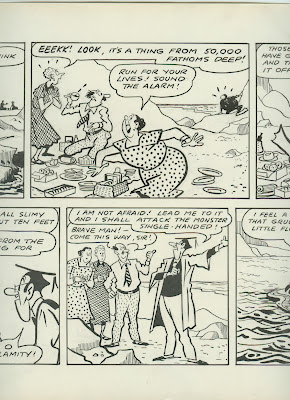 The originals are huge (the art area for each half page is 390mm wide by 239mm high, plus margins) but hopefully these scans will appear the right size or larger on your screens so that you can appreciate them. As always, click on the images to see them full size. (You'll notice a difference in paper shade between panels 4 and 5 of the half page scan but that's just due to it being scanned as two halves and reassembled in Photoshop.) 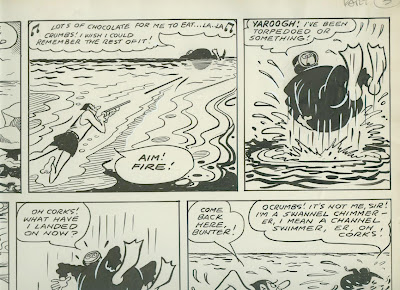 As you can see, Bunter himself is more pear-shaped than usually portrayed. Under Eric Roberts' style he's all arse and stumpy legs. I've no idea which issue of Knockout this story originally appeared in, but it's reprinted in its entirety in Mike Higgs' collection The Big Fat Bunter Book (Hawk Books 1989).

Update: On his brilliant Bear Alley blog, comics expert Steve Holland reveals:
"Roberts was on the strip for about 18 months following the death of Frank Minnitt, who had drawn the strip for nearly 20 years. Roberts was already a Knockout veteran himself, having drawn 'Mike' (later 'Mike & Dimps') for the paper since 1945; later he drew 'Sinbad Simms' for Knockout (1957-60) and 'Winker Watson' for Dandy (1967-79)."
Posted by Lew Stringer at 15:35

Eric Roberts sure kept to certain character types..Winker/Dirty Dick/Nicky Nobbs all look the same...But maybe thats what made it special...David Laws work had the same quirk...Beryl/Dennis...the Dads and Mums

Funny seeing Bunter as a pear shape...Amazing the character of Billy Bunter was in the last whizzer and chips 1990 (reprints from Valient) so staying power was amazing in the comics...also featured briefly on the cover..


Fatty in Bash Street...Fatty Fudge in Minnie will they be around for 100 years...there is something quite interesting about this character that will never go out of fashion...it works for Garfield..

I loved Eric Roberts work on Sinbad Simms in Knockout. I've only seen the strips from the annuals but loved his cartoon style used in a 'straight' adventure strip.

Did artists letter their own strips up to the late 50s? I'm curious because there seems to be a lot of variation in lettering styles in some Amalgamated Press titles of the time. I think it gave the individual strips more personality.

I believe some did letter their own work. Eric Roberts certainly seemed to. I prefer to letter my own stuff when possible too, as leaving a space hoping that the letterer will put the balloon in the right place is risking it to chance sometimes.

The strip shown was originally published in Knockout issue dated Jun 6th 1959 and it is complete.
The bottom half of the second printed page featured a reader participation piece 'Bunter's Six of the Best'in which 'tuck hampers' were up for grabs if you sent in a joke and got it published. Eric Roberts also supplied the artwork for this feature. In total he drew the Bunter strip for 63 consecutive issues from No1013 (26/7/58) to issue dated 21 Nov 1959 after which Albert Pease took over but leaving Roberts still providing the artwork for the joke feature.
Regards, Ray.

A million thanks Ray! I thought you might have the issue in question but I didn't want to inconvenience you to check it out.

Not having any Knockouts from that period I didn't know Eric Roberts had worked on the strip for so long. I gained the original art from an editor at IPC years ago when they were having a clear out and asked me if I wanted any originals. Eric Roberts, being a favourite of mine, was one I asked for. (That's also how I got the originals to Ken Reid's last Nervs strip.)

I also have the very first Niblo Nibbs strip, also by Roberts, which I'll show on the blog soon.

Knockout issue dated 21 November 1959 was number 1082. I think Eric Roberts did Bunter as he would have looked rather than the slimmer version in Magnet since Bunter regularly gorged himself on huge amounts of food. Knockout 1083, you can see how a new artist changed the Bunter strip.