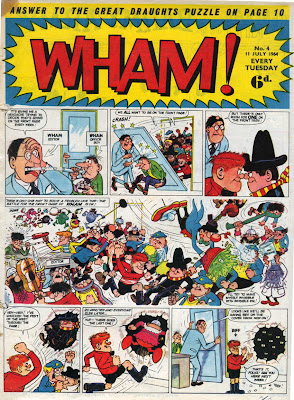 Too busy for a long blog today but I thought you'd be interested in seeing this. After three issues of full page images promoting the free gifts, issue 4 of Wham! (11th July 1964) featured a comic strip. Not just any strip, the nameless 7-panel fun-fest by Leo Baxendale featured all the comics' humour characters fighting over who'd be the regular cover star.

The fightin' mad Biff won the scrap, and became the cover feature from issue 5, (but months later lost out to the more popular Tiddlers).

One character not featured on the cover was Frankie Stein, who made his debut appearance inside this very issue. Ken Reid's detailed black humour was a hit with readers and the character became one of Wham's most popular features. The strip was resurrected years later by IPC under the capable hands of Robert Nixon in Shiver & Shake comic, but IPC's chummier, cuddlier version was never a patch on the original. 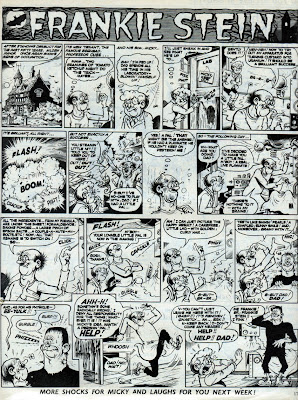 Love the way everyone is fighting to be the cover star.....what a funny idea....great stuff...

It makes me salivate to think about all the comics out there that I have never seen.

Nice one, Lew, the world cannot have too much of Leo or Ken!

I love Ken's work on Frankie Stein. I used to get shiver and shake and memories on Ken's work stayed with me (Creepy Creations). I remember the Frankie strip (and now I know that was drawn by someone else).As per the way of parents my mom threw the comics out but years later I acquired a full set (at near mint condition, some not read and still including card adverts for encyclopedias inserted in them) from the lovely ebay in its early years. Great memories. I wash someone would put together a complete run of Reid's Frankie.

I Think That It Is Quite A Slur On Britain's Publisher's That Either DCT Or Any Other Far Sighted Publisher Has Never Put Together A Ken Reid Treasury..Even A Softback Would Be Lovely..It Stagger's Belief That Jonah,Frankie,Jasper,Ali Ha Ha,Jinx Etc; Etc; Have Never Seen Print Other Than Their Original Appearence Or The Occasional Reprint...Wish Someone Could Get A Ken Reid Book Off The Ground...Heaven!!

Sadly the more time passes the less likely it is that there'll ever be Ken Reid collection. It's been nearly 30 years since he died so there are only those of us of a certain age who remember his work, plus a few younger collectors who are interested in comics outside of their personal nostalgia zone.

If it ever happens it's more likely to be an expensive small print run book, but we live in hope.