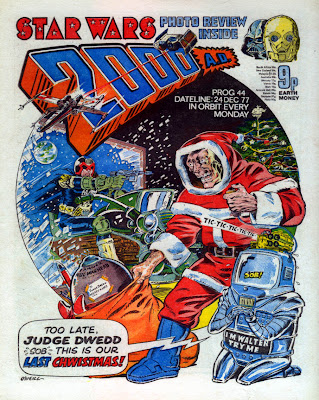 Time for the second gallery of Christmas editions, starting with the very first Christmas issue of 2000AD, from 1977. It's a great eye-catching Judge Dredd cover drawn by the never less than brilliant Kevin O'Neill. 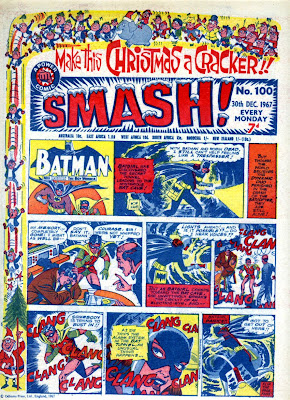 Above is the cover to Smash! from Christmas 1967 which was also the 100th issue of the title. The U.S. Batman newspaper strip is on the cover as usual but the rest of the page is decorated in typical "Power Comic" robustness; The Blots herding The Swots to plunge bum-first towards a sharp Christmas tree held by Grimly Feendish disguised as Santa. 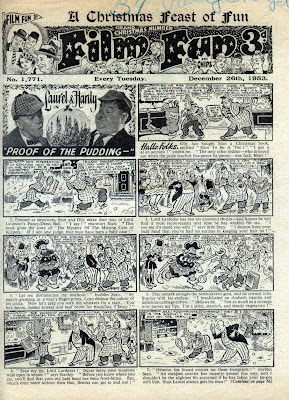 The oldest comic in this selection is Film Fun and Chips from 1953. Artwork on the Laurel and Hardy strip is by Terry Wakefield I believe. Although black and white comics such as this were rapidly going out of fashion by 1953 it still manages to convey a festive feel. 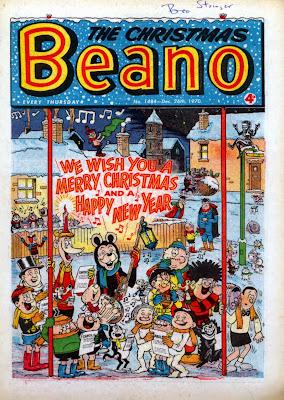 A trio of weeklies from Christmas 1970 next, starting above with a great Beano cover by Dave Sutherland. 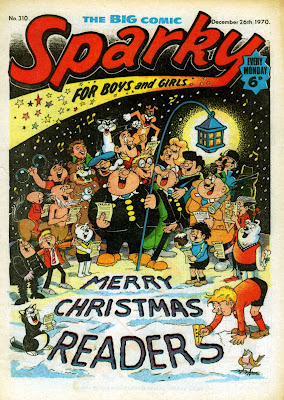 The Christmas issue of Sparky from 1970 was a nice companion piece to the Beano of that week in that it also featured all its stars gathered around a lantern singing carols. It was drawn by regular Peter Piper artist Vic Neill (my thanks to his son for confirming that) and he captured all the various art styles perfectly. 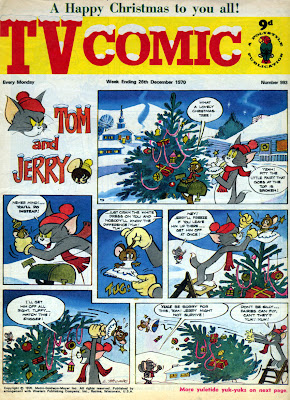 Polystyle's TV Comic of Christmas 1970 features the regular Tom and Jerry strip on the cover, drawn by Bill Titcombe. 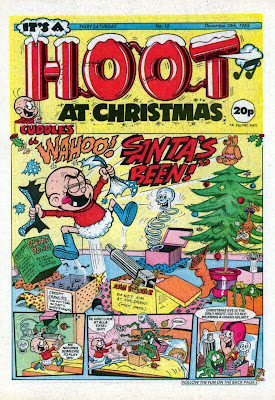 The Christmas 1985 issue of Hoot was the only time that particular comic celebrated the festivities, as it would merge into The Dandy during the following year. Here, the Cuddles cover is by Barrie Appleby from the days before Dimples joined the strip when the comics merged. 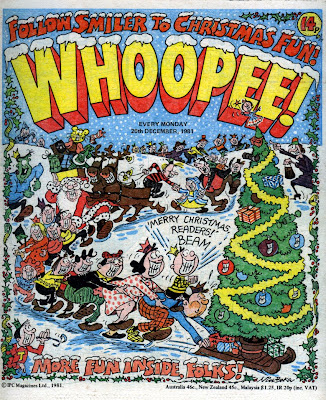 Finally in this selection, a lively Christmas Whoopee! from 1981, illustrated by Nick Baker and featuring all its characters dancing the conga!

Walter the Wobot predates Wham's Last Christmas! If only their classic video had featured a Nuc-Warhead-toting Santa and a surprise X-Wing flyby.

Lew, loved the displays of festive snow capped comics, in particular the 1970 choir theme covers on Beano(a personal favourite) and Sparky -- I never realised that these two appeared at the newssagents at the same time - what a fantastic sight!

I think us Brits take these Christmas editions a bit for granted. Over the years I've been searching out Christmas comics from all over the world and have found that, until recent years, most of the foreign comics i found featured religious nativity scenes instead of Christmas trees, colourful presents and Christmas Pud. I'm of the opinion that the Brits produce the best festive comic covers in the world - a tradition I hope we can hang on to.

Thanks for your comments. I was starting to think this was an unpopular choice of theme for this blog due to the low response and was considering dropping it.

Good point about the foreign comics Dave. I have two or three Christmas comics from other countries which I'll feature here if I can find them.

It doesn't get more nostalgic than comics and Christmas. These include some titles I'd not heard of (having left the UK in 1975 after about 11 years living there.)
I was wondering: how much of your collection consist of comics you've kept since childhood and how much is from later acquistions? About 50-50 or what?
I saved only U.S. comics and --partly because they piled up faster-- threw away the British weeklies. But now I wish I had kept some of those Beanos, Dandys, etc., from the 1960s.
I do have a few that were sent to me over here in the 1970s and later.
Best wishes for the season. Great job as always with the site.

I think it's probably more like 20% of my stuff is from childhood, but I'm getting rid of a lot of more contemporary comics so that ratio will change.

I believe the 1970 Christmas cover of the Sparky was drawn by my dad, Vic Neill. Thanks for posting it.

Thanks for confirming that, Vic. You're right, it was by your dad. (I'll update the text.) He did some great pages and that cover really captures a Christmas feel. One of my favourites.