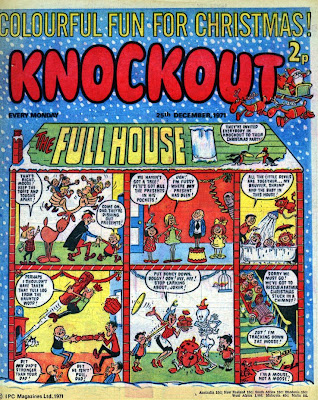 Thanks to those of you who said you enjoyed seeing these old covers. I don't intend running them right up to Christmas, - only a few more blogs on this theme to go, - but there's still some crackers to come, if you'll pardon the pun. Starting off this session is the cover to Knockout from 1971 featuring a host of the comic's characters joining the Full House family for the festive edition. The artwork is, I think, by Joe McCaffery. 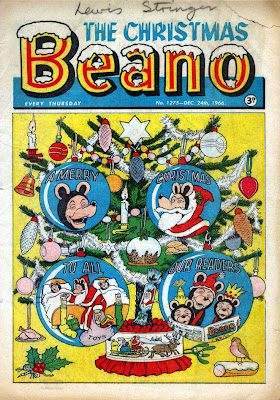 The Christmas Beano for 1966 is a wonderful piece by Dudley Watkins who managed to include almost every Christmas comic iconography on one cover: decorated tree, pud, Santa, crackers, pressies, reindeer, mistletoe, holly, turkey, mince pies, snow, and even a robin on a Yuletide log! Incidentally, the reason my name's on the top of the cover isn't due to some weird compulsion to scrawl my name on everything I own, it's because I had The Beano reserved at my local newsagent in the Sixties. 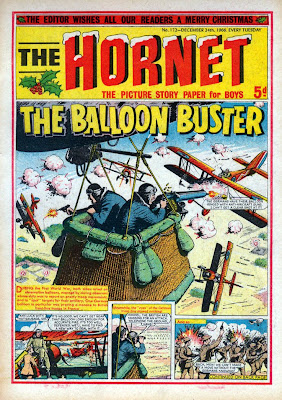 Compare that Beano to The Hornet from the same week in 1966, which, apart from the logo, has no reference to Christmas on its cover at all. 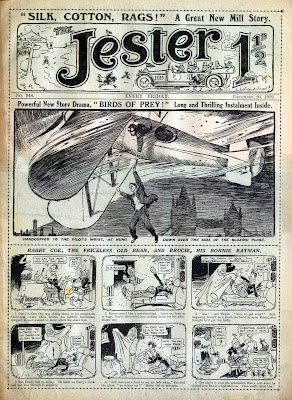 The Jester from 1919, quite expensive at penny ha'penny at a time when most other comics were a third of that price, wasn't very festive either, except for the Harry Coe, The Priceless Old Bean strip on the bottom half of the cover. Artist unknown. Perhaps a more dedicated Christmas issue appeared the week after, which would be dated December 27th? 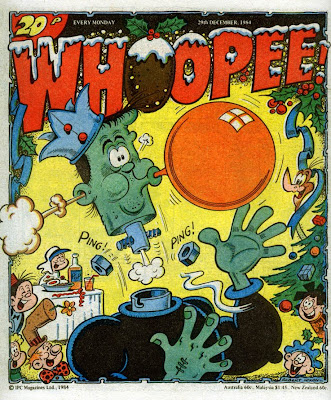 The Christmas Whoopee! from 1984 is a lively Frankie Stein cover by Robert Nixon, who also designed the special logo for this issue. Nixon clearly relished drawing his Christmas pages as he always decorated them so well. 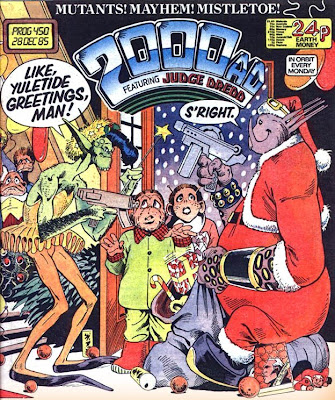 Alan Davis is the artist for the 1985 festive edition of 2000AD featuring D.R. and Quinch. Some adventure comics such as Countdown or Action didn't bother with Christmas covers, but 2000AD often showed how it could be done without looking too juvenile, - a tradition it upholds to this day. 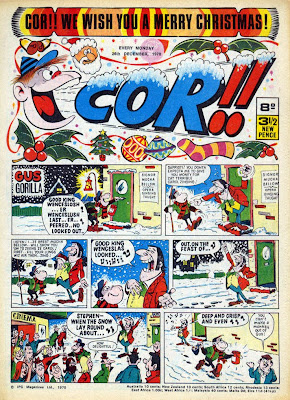 Cor!! was IPC's second humour comic launch after Whizzer and Chips and this 1970 edition drawn by Alf Saporito was its first Christmas cover. Mike Lacey was the artist who drew the Gus Gorilla head shot though, and no doubt the festive adornments were added by an IPC staff artist. 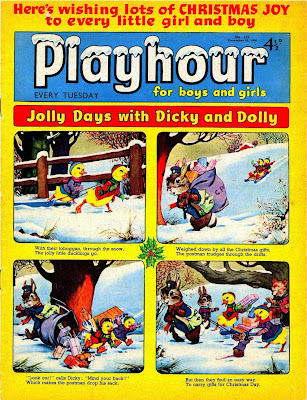 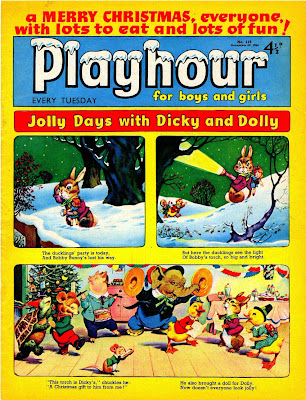 Finally for this selection, two Playhour covers, both from 1956, kindly sent in by blog reader John Wigmans. Depending on which day of the week Christmas falls, some comics in the past have published two celebratory issues, as is the case here. The sumptous artwork is by Harold McCready and a short article on the artist including scans of his original artwork can be read on Steve Holland's Bear Alley blog at this link:

I love this feature...

Loved the Knockout, Cor!! and Whoopee covers..boy I sure miss Fleetway comics...a bit more cheekier than The Beano and Dandy..

Of course that Beano cover is ace.....another good one is when they are singing carols 1969ish or 1970....thats another good cover..

Very much enjoying this series of Christmas covers. I wondered if the old Marvel reprint collections ever went in for festive editions? I bought most of them at the time but it escapes me exactly how or if they celebrated Christmas.

The character in the bottom left of the final panel of the Cor! cover looks like the work of another artist to me (possibly Terry Bave?). Also the different style of lettering in the speech balloon suggests to me the final panel didn't originally have a payoff, and someone felt that the final line (feeble as it is) delivers a more rounded ending. Really enjoying these Christmas covers!

The character at the end of the Gus strip was a regular who popped up every week with the same catchphrase "You can't make a monkey out of Gus". Unfortunately it did get very boring after the first few weeks it must be said.

Another lovely display of Christmas covers - and a nice assortment too.

Like you, I'm curious about The Jester Comic. It isn't very festive, which is unusual for a pre-war xmas comic, although the cover strip clearly celebrates Christmas.

Have you checked out the paragraph at the end of each text story serial? If it announces 'Continued in Next Week's Grand Christmas Number' then you'll know for sure.

Good suggestion Dave. I checked, but there's no mention of Christmas except for an editor's note saying the next issue would be on sale a few days earlier because of the holidays.

Great feature.
But wasn't that 2000ad cover a wrap around?
One year there was a very nice Kevin O'neill wrap around too.
Being an old Marvel UK reader I can't remember many festive covers. I'm sure Spiderman Weekly had a painting by Waklin (?) featuring Spidey with santa hat and sack of presents. I'm sure Waklin did an excellent wrap around with Spidey and the FF with kids and presents in the Fantasi-car (or what ever that flying transport thing was called).

Yet more gems. A great feature Lew, thanks for sharing them with us.

I think you're right about Joe McCaffrey. It's a good one!