BATTLE in the shops 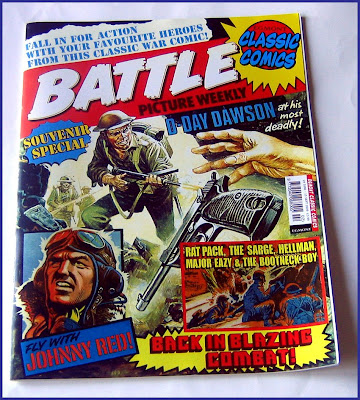 As you may have already read on other blogs the second in the series of Egmont Classic Comics is out now, this time spotlighting Battle Picture Weekly.

Only available from branches of WH Smith, the 52 page £3.99 special contains a good selection of reprints from the old war comic. Characters such as Johnny Red, Major Eazy and The Sarge are represented, with artwork by Joe Colquhoun, Carlos Ezquerra, Mike Western and more.

Reproduction of the strips is great considering the pages are probably scanned from the comics rather than from original art. Paper quality is superb; a heavy matt stock, much better suited to such strips than light-reflecting glossy paper.

Unfortunately some of the strips end with cliffhangers which will never be resolved as this is a one-off edition. The conclusions saw print 30 years ago of course, in the original printings, but for new readers it's very much a case of "For you Tommy, the war is over". Particularly evident in the Day of the Eagle cliffhanger which has Hitler victorious over our apparently dead hero.

As stated above, this comic is only available from WH Smith. Sadly, my local store seems to be a slave to its system these days and as they shelve comics alphabetically this Battle special was crammed into an already stuffed top shelf, wedged behind Beano, Beano Max, and Ben 10. I only found it by accident when I pulled out The Beano. (As mentioned here before, unless publishers' sales reps get store managers to tidy up their act I foresee major sales slumps for UK comics.)

Egmont Classic Comics: Battle Picture Weekly is on sale until 15th September. Replacing that on the shelves, the next Classic Comic, Buster will be published, followed by Misty in December.

This One Seems to be a Nice Buy for all the Nostalgia it is associated with.

Now that i have already read Day of the Eagle and Rat Pack in my mother Tongue (Tamil Language)I've already made sure this book reaches me to India very soon, as i get my crickeys.

Buster and Misty have also been introduced to Us. So it seems that Happy reading season is ahead of Us.

P.S: Take Care of the eyes, As i want So Many Posts like this in the years to come.

I've been looking forward to this, but I'm sorry to say that I'm rather disappointed.

I agree that the choice of a nice matt paper is preferable to glossy pages, but I think that the actually printing really lets it down. To my eyes it looks far inferior to the original, cheap, rag-edged newsprint printing. Rat Pack, Eazy and Hellman suffer particularly - the thin white lines in big patches of black of Girault(?) being bled all over, fine outlines looking blocky etc; and Ezquerra's colour pages are just so blotchy, with faded out blacks beneath muddy, indistinct colour tones.

As you say, the comic appears to have been printed from scans rather than original artwork - but this is no excuse. Hibernia, a cheap-and-cheerful fan operation, managed far better with its Thirteenth Floor and Doomlord editions, in which scanned artwork was scrubbed up in Photoshop first. I find it hard to believe that an operation as big as Egmont could not do better.

In addition, I think that a brief introduction of some kind was in order, some context, some extra material of some kind... And some pagination, and a contents page, and a proper method of accreditation. And a better cover (you could have got away with this 20 years ago, but not in 2009).

I don't mind paying over the odds for a work of quality, but I do when the original art has been poorly reproduced and the original creatives aren't making a penny out of it (unless I'm wrong on that?).

Agree with you on those points Bristle. As for the cover, it's mostly a re-used Battle Summer Special cover from 1976! I suppose the dated cover layout and fonts are to make it look like an old comic so time will tell if it worked.

It's not so much the elements of the cover that bugs me, it's the haphazard way they've been put together, and the mix of old, un-touched up work side by side with 'virgin' fresh new bits in a half-heartedly 'old fashioned' style.

Also, there's a mixture of faded inks and too-strong inks, and a mixture of genuine hand-draughted comics fonts and too-perfect digital typefaces, that seems to jar.

And come to think of it, the contrast between the repro of the Lawrence bit, which rather faithfully shows his brush strokes, and the other two illustrations, with the rough-and-ready 'blobs' of colour, seems rather stark too..

It's a shame, because the Don Lawrence painting is rather nice (though not as outstanding as I think the edition required - did Egmont not look through that much material or something?), yet various bits of page furniture and other artwork overlaid on it detracts from this...

Arrgh - sorry, I'm banging on all over the shop, and I don't have the technical language to explain what I'm getting at! You're an artist with plenty of craft under your belt, am I making any kind of sense?

I think what it boils down to is that this is an edition clearly aimed at nostalgic former readers, yet it doesn't give us our full shot of nostalgia. The reproduction of the artwork is in some ways superb, but in other ways it is terrible; and the 'warmth' of the artwork as we avidly read these stories originally is gone. I think te same thing happened with Titan's ROTR reprints.

Agree - Smiths need to get their act together. I too found this mag by accident but bloody well enjoyed it.

When is Roy of the rovers 2 coming out?