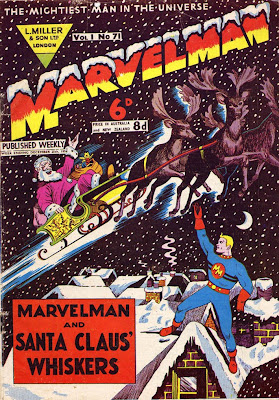 Marvelman was created by Mick Anglo in the 1950s as a replacement for the British reprints of the American Captain Marvel comics, when Captain Marvel was forced out of existence by DC Comics over its alleged similarity to Superman. Marvelman was revived in the early 1980s by Alan Moore and Garry Leach (followed by Alan Davis) for Dez Skinn's Warrior comic. When the character was reprinted in the USA by Eclipse Comics, more litigation (this time by Marvel, over the name) saw the superhero rechristened Miracleman. Bizarrely, then Miracleman itself later became subject to copyright wrangles by various people who had been involved with it.

However, apparently Mick Anglo still owned the rights to "Marvelman" and within the last hour, Joe Quesada, Editor In Chief of Marvel Comics, announced that Marvel have now bought the rights from Mick and will be publishing the character in the future. Whatever that form will take, whether it be reprints of the Warrior & Eclipse material or brand new comics, or (my guess) both, remains to be seen.

More news on the acquisition on the Comic Book Resources website:
http://www.comicbookresources.com/?page=article&id=22206

Update: Judging by the banner on the Marvel Comics home page (below) it looks as though Marvelman merchandise is already on the cards in the form of a T-shirt. Expect more to follow....

The new illustration of Marvelman on the left of the banner is by Joe Quesada.
Marvel Comics website: http://marvel.com/

Very interesting development this - hopefully the 80'-90's series will see the light of day again... I read that Neil and Mark planned a Silver and Bronze Age to follow the Golden Age and, considering Mark Buckingham has turned into the most beautifully fluent comic artists around, I would welcome any such return. How Mr Moore will deal with Marvel / the news, however....

It's possible that Alan is ok with it. He was expecting there to be reprints soon anyway, as he said in an interview on the Forbidden Planet blog recently in May of this year:

"AM: Nah. I mean, other than the fact that I was happy to do everything that I could to help Mick Anglo, who is the person who has always owned all of the rights to Marvelman, as far as I now understand it, that we never had the rights to do those stories, even though Mick really liked the stories that we did. We didn’t understand at the time that Mick Anglo was the sole owner of the rights. We were misled. So I’ve done everything that I can to clear all that up. I’ve said that, they talked about the possibility – what they want is money quickly, because Mick’s a very old man, he’s got a sick wife to look after, and they could use some dosh quite quickly."