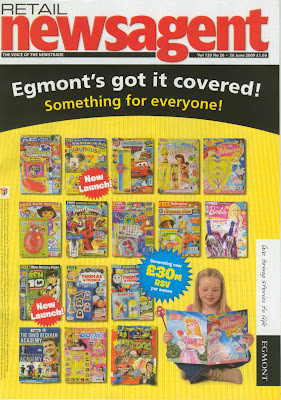 Last week's issue of Retail Newsagent, a magazine for the newstrade, ran a feature on the current state of British comics and found the market still had potential.

However, a sad sign of the times was that at no time did the article mention the word "comics", preferring to refer to them all as "children's magazines". Even The Beano wasn't exempt, with the 71 year old title being called a "children's publication".

The two page feature, by David Harris, covered how the titles were faring in the recession, with quotes from various publishers to say how resilient children's magazines are. Apparently there are an incredible 156 children's titles currently being published, with overall sales of 64.1 million. Whilst most of those titles do not feature comic strips (so cannot be classed as comics) it's obvious they are still considered by the trade to be of a similar ilk to comics, - all falling under the "children's publications" banner. The emphasis of the article was mainly on the younger end of the market; an area which retailers seem to consider to be the main arena for comics today. 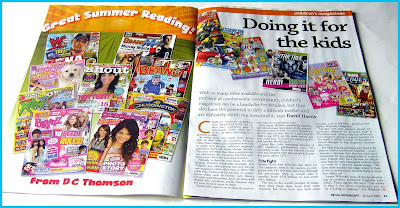 Jaynie Bye, joint Managing Director of BBC children's titles, responded to retailer's "bugbear" over bulky cover mounts, explaining how they boost sales and that buyers now expect them. "We have now reached the stage where if there is not a covermount, parents think it must have fallen off."

The recent development of occasional higher cover prices for certain issues was also addressed (such as Spectacular Spider-Man and The Beano increasing their prices by 50p or more on some weeks). James Willmott, head of group advertising at Titan said "Retailers like this because if there is a larger margin to be made they want a piece of it."

Recent new laws restricting certain advertising in children's magazines seems to have benefited the titles. Alison David, commercial director of Egmont, relates in the article how, because the titles' incomes are now more dependent on cover price than advertising, any advertisers pulling out due to the recession shouldn't damage the magazines' profits too much.

The article concludes that "the magazine market might be struggling, but children's is definitely one of its strongest sectors" and that "this is one well-established sector upon which retailers can rely".

It's great that an influential trade magazine such as Retail Newsagent is giving out such a positive message about kids' comics, even though the message is solely about profit not content. Unfortunately it seems that bulky cover mounts, overcrowded shelves, a "younger" tone, tv-centric titles and price hikes are here to stay for the foreseeable future. 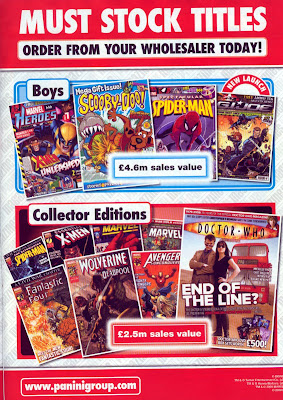 A few interesting revelations came to light in the advertising features surrounding the article; looks like Panini are launching a new GI Joe comic later this month, and are soon to revamp The Mighty World of Marvel, relaunching from issue one.

The biggest news however was mentioned in a sidebar to the main article: this September The Beano is being "restyled" to reflect the upcoming new Dennis and Gnasher tv series on CBeebies. No further details of the relaunch were forthcoming, except that it would feature "a series of free gifts" to coincide with the tv show. Watch this space for further developments.

Surely Dennis and Gnasher will be on CBBC, not Cbeebies?

I'd have thought so too, but that's what the article claimed.

If they relaunch Mighty World of marvel from issue one, will they give away another 'Green-skinned Monster' iron-on transfer?!

Dennis & Gnasher on CBeebies! That sounded like the Beano was about to be 're-styled'into a 'pre-school mag' for a moment.

I checked the Ludorum website (the people who are licensing the TV series) and although I couldn't find a lot about the new D&G series, was reassured to read the following ...

'..The company is planning to remain small and focus on the three properties already in its catalogue. Dennis and Gnasher has a launch on CBBC in the autumn of 2009, rolling out globally with a licensing programme from 2010 onwards.'

- so, hopefully this means it will be made for the slightly older CBBC audience.

What stands out to me about that Egmont poster is how utterly unmemorable and un-eyecatching those covers are.

They say "something for everyone" but the covers all look pretty much the same to me. The colours are totally generic -- the same few shades of yellows, greens and blues seem to blur from one cover to the next. Almost every one of them is endlessly cluttered by free gifts and pop-out boxes and splash headlines and verbiage and extra images. Almost every one has "FREE" in big letters in the top left, frequently in a more legible font than the actual title, one of which I can't read at all.

The other slogan is "We Bring Stories to Life". But not one of these covers suggests to me any kind of story. Not one. They're almost all single characters in poses that look like standard promotional art. A number of the images I'm sure I've seen before and I don't know anything about most of these characters so I can't imagine it's going to excite many of the kids who are actually into this stuff. Some of the covers I can't even work out what's going on. None of them really suggest that there's an overriding vision or mission statement for the comic. None of them tempt me inside so much as point out the goodies taped onto the front.

(Of course, usual caveat: I'm not anywhere near being in the audience for these things -- not a kid, not a parent, not even an uncle. Maybe this works for them. But still...)

I know what you mean Ed. Regarding the mastheads though I suppose they're restricted by the licensed product's logo.

Personally I find most kids' mag covers too garish and cluttered, but apparently research shows that they like "busy" bright covers. Have children really changed that much since the clear layouts we liked as kids?

I'd like to see at least ONE comic buck the trend and do a bold, clutter-free cover like they used to be, just to see if it made any difference to sales. I'm sure this has already been considered and dismissed for some reason though.

What I don't get is: if covermounts are what sell the comic, and as they obscure the cover anyway, why not put a strip on the front? Or at least use a less cluttered cover? After all, it's not as if the kids can see the covers until they peel the free gift off/open the bag.

Good point on the cover. Perhaps using stock imagery on the front is cheaper than commissioning a strip for the cover and then having to fill space inside?

I don't know much about how these companies research things but I remember as a kid filling out a form for a comic called Max Overload. It's probably a bad example since it flopped after two issues. But it was in some ways ahead of its time -- 70% games mag, 30% comic.

The first issue had a form that was full of the usual audience research questions. I just ticked "more" alongside almost everything, except the odd feature I didn't rate. I dare say this included "more free gifts" and if there was an option for "more colourful covers" I'm sure I'd have ticked that too. Who wants less free stuff and duller covers? But these weren't important considerations for me buying the comic, whatever I put down on the form.

Nowadays kids might well go for the cluttered covers because they'll support ones which resemble their favourites. The DFC had some very varied ones though. I'd love to know what ex-DFC readers make of the newsagent shelves. But then again, the DFC isn't around any more either.

I don't know how much I'd trust the short-term shift in sales stats either. No surprise if a different cover causes sales figures to go down because a certain portion of the current audience who like the status quo would be turned off, but it would take a while for a new audience to arrive (if they arrived). It also strikes me that loyal readers might enjoy the variety more than casual readers who wouldn't notice the difference, but only one of those groups' reaction would be evident in the short-term.

The business strategy of these comics seems to be that these things are to be disposable rather than cherished.

Of course, this is mainly me backing up my own prejudices without any real hard facts. And even if everything I said is correct, I can't necessarily fault Egmont for seemingly sticking with a tried and tested house style across their line. Especially in a recession.

It seems self-evident to me that if it's possible to re-ignite comics as a mass children's medium at this stage, this isn't going to be the way. In the last decade, Harry Potter and Doctor Who really kicked kids' publishing and kids' television in the pants and both were risky because they were, in a funny way, very traditional. Serial. Complex. Big characters. Tension. Mystery. Wore story on their sleeves. But I don't blame any publisher for wanting to avoid the stigma of the 'noble failure'.

Beano comic HAS been restyled, not relaunched, to suit the design of the animation. Regular comic strips and features remain, with the likes of the cover, contents and beano club revamped with the new style. HTH.

Are you sure Anon? Are you saying there won't be another restyling when the cartoon appears on tv?