Marvel UK in the early Nineties 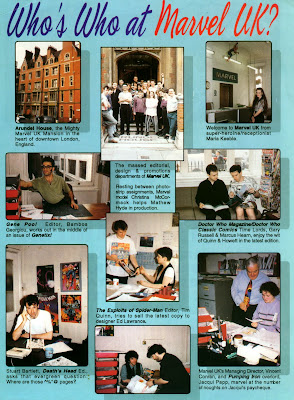 Back in 1993 Marvel UK ran a few photo features in one of their comics showing the readers what life in their office was like. (I forget which comic these pages appeared in. I saved the article but not the magazine.) Back at this time Marvel UK were based in Arundel House which was a nice central London location where they'd moved to a few years earlier from Redan Place.

Several of the people seen here are still major players in the comics industry of course: Doug Braithwaite, Dan Abnett, Liam Sharp, Paul Neary, Andy Lanning etc. David Leach (on the far right in jeans in the group shot above) is now an editor at Titan Books, and Peri Godbold (centre of the group shot in a purple top) is the designer of Panini's Doctor Who Magazine. Tragically Steve Whitaker (seen in the page below) passed away in 2008 far too young at 52. 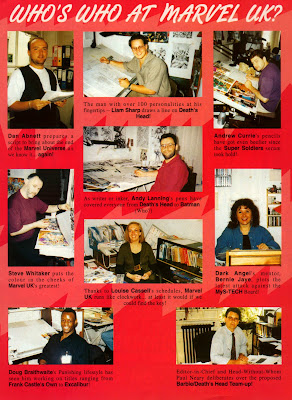 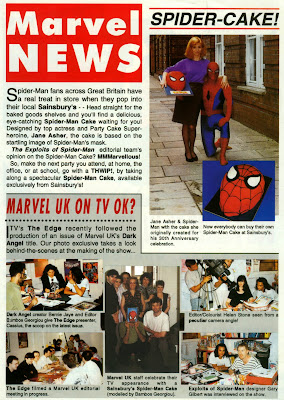 I only ever visited Marvel UK once, but I can't remember if it was at Arundel House or Redan Place at the time. I remember meeting big John Tomlinson there for the first time - must have been the late 80s or early 90s. John was a really good editor - you wouldn't happen to know what he's doing now, Lew, would you?

The first ever Marvel UK 'editor' was Pippa M. Melling, if I remember correctly. I recall MWOM saying they would print a picture of her one day, but they never did. Any chance of you tracking down a photo of her, Lew - it would resolve a 37 year old mystery for me - I've always wondered what she looked like.

Might have been a later issue of Overkill some of these appeared in. If you hunt around on facebook, many of these pictures have been posted there on the MUK groups. Cheers for sharing.

Kid, Not sure what John's doing now. No photo of Pippa I'm afraid. Never even heard of her.

John, Were you still at Marvel during this period? Didn't see you in the photos. Or had you left by then? (John Freeman was once the editor on Doctor Who Magazine, and other comics, for those of you who didn't know.)

Pippa M. Melling was the first British Marvel editor for quite a few months (at the very least), as credited in the indicia of THE MIGHTY WORLD OF MARVEL. I believe Larry Lieber (Stan's brother) was the actual editor as the comics were prepared in the States and merely printed over here. The first few letters pages were done in the States, with letters taken from early American Marvels, but with British sounding names attached. (Roger Masters, for example.) Pippa would probably have edited the letters once the 'real' ones started rolling in, but apart from answering the 'phone and sending out back issues, her job was quite a bit removed from that of an actual, hands-on editor, I would imagine.

John Tomlinson became edi-oops Tharg in the early to mid 90s (he also co-wrote The Lords of Misrule for Dark Horse - new collected edition out now!), then he went back to Marvel UK (Panini), Did a stint at BBC Children's Magazines, Wrote for numerous publications including strips for Dr Who Magazine.
He presently resides at Eaglemoss where he has helmed The Lord Of The Rings Figurine Collection for the past 6+ years (issue 180 (final issue) goes to presses imminently). He has recently taken editorial duties on The Classic Marvel Figurine Collection (which is looking to beat the 180 run of LOTR!!!!).
PS He's my pal.