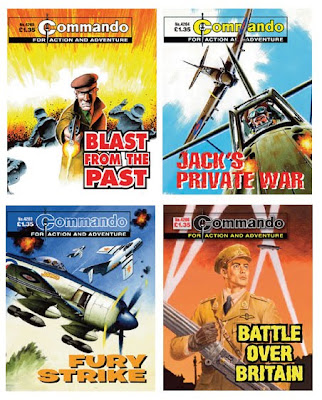 D.C. Thomson have just released the latest four issues of Commando that should be in the shops from today. As usual the consist of two brand new issues and two reprints. Details below from editor Calum Laird...

Have a look at how these two aircraft — one British, one Soviet — match up:

Which one do you think would come out on top in a dogfight? Maybe the MiG? Well, you’ll find out if you read this amazing story…

“A splinter of metal is lodged in your heart. If it moves, you will die.” These words struck Flight-Lieutenant Jack Hammond like a hammer blow.
His immediate thought was to lie still, keep quiet, not move. But then he reasoned — if I’ve got to go, I might as well go out fighting! It was then that Jack declared his own private war on the Nazis — and he didn’t care whether he survived it or not.

Ken Gentry was, I think, based in South Africa which in the days of snail mail made the delivery of one of his scripts a long drawn-out process, especially if there were changes need to the synopsis.

When the Germans bulldozed their way into France in 1940, it re-awakened memories of the First World War.
In one case it also re-awakened a vast cache of explosives left forgotten in that country. A terrifying reminder of what had happened 25 years before. And for one soldier, Lieutenant Johnny Stafford of the Royal Engineers, this was only the first blast from the past this war would bring.


Commando No 4266: Battle Over Britain

In June 1940, the RAF battled in the skies of over Britain to turn back armadas of German bombers and fighters launched against them. The fighting was desperate and deadly.
But this wasn’t the first time that British airmen had done battle in those same skies. Years earlier, airborne attackers had streamed across from Europe to attack. And just as in 1940, it was up to a handful of brave men to turn them back.

Hmm, wasn't it Battle that also used the "if the splinter of metal near your heart moves you will die, so go on crazy suicide missions" story?

Yes, interesting isn't it? That Commando story originally appeared in 1974, and BATTLE with "D-Day Dawson" and the same premise debuted in 1975.

An issue full of Ian Kennedy art? Yes, Please! I'll be picking that up. Cheers for the tip, Lew.