Anniversary year dawns for The Dandy 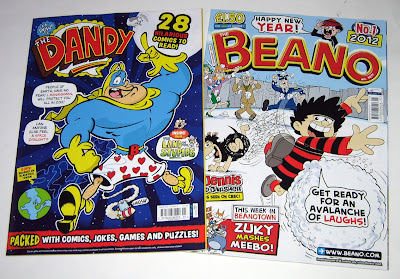 The New Year editions of The Dandy and The Beano were out earlier in some areas than scheduled. Tomorrow (January 4th) was the planned publication date but I bought copies from my corner shop on New Year's Eve.

This year is an important one for The Dandy, with it reaching its 75th anniversary at the end of 2012. (The Beano will celebrate its own 75th seven months later in 2013.) Both titles are the longest running comics in British comic history. Although a few older collectors may yearn for the comics to return to the style of their childhoods, it's the evolution of the comics that have kept them fresh for new generations to enjoy. Yes, sales have still fallen over the years. They've been falling for the past 60 years at least as they try to compete with the other distractions children have. If some of the more relentless critics really believe a retro-looking comic would appeal to today's children perhaps they could spend their time producing one, getting it on the shelves, outselling current comics, and proving their point constructively.

This week's Dandy and Beano are significant for two reasons. The Dandy No.3566 is the first issue since the revamp without a Harry Hill strip as the series ended in the Christmas edition. Sadly it's lacking any Nigel Parkinson strips whatsoever, but I hope that will be rectified soon as his work is truly one of the comic's strengths.

There's still a lot to enjoy though, including Wayne Thomson's eye-catching Bananaman cover and the return of a classic favourite guest starring in a very funny Mr.Meecher strip.

Over in The Beano, there's a stack of great material including work from Laura Howell, Hunt Emerson, Barrie Appleby, Nigel Parkinson, and a classic Billy Whizz reprint from the 1960s. There's also a special Super School strip that I drew as Bananagirl sets off to herald the arrival (next week) of... Bananaman! What? Will the character now be appearing in both comics? New strips in The Dandy and the classic style in The Beano? Stick with 'em and find out. 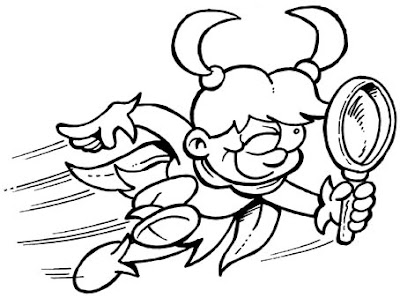 Kind of ironic that the Dandy has Bananaman on the cover considering the Beano news about him, lol.

I'm still kinda wanting to hear about the 'Bananaman Blue, Bananaman Black' story where the current Blue foreheaded one, fights the earlier Black foreheaded one from Nutty, complete with the differences in character and design ^_^ Bald headed Eric Vs Black Haired Eric..Red Gloves vs Yellow Gloves..
isn't gonna happen but there you go.

Anything's possible! It could be fun as long as it's written on a level for younger kids as well as older fans.

Nobody's looking for *retro looking* comics. All they want is comics as well drawn and funny as they used to be. As for retro, The Phoenix is quite an old fashioned name and the design of the title looks dated. And Strip Magazine is publishing Hook Jaw. Hardly cutting edge.

I stand by what I said. Some people do want comics to have the same style as the ones they grew up with. It's as unrealistic and selfish a viewpoint as if adults of the 1960s wanted comics to be like they were in the 1930s.

If you don't find today's childrens' comics to be "as funny as they used to be" perhaps it's because you've outgrown them? Lots of kids DO find them amusing thankfully.

Never mind arguing semantics Anonymous, just get out there and produce the sort of comics you want if you don't like what's on offer.

Also Anonymous, rather than be decieved by The Phoneix's name, take a moment to check out The Phoenix's website to see the variety of styles within - that's the beauty of comics - they can be ANYTHING. Why tether them all to a unified style? It makes no sense.

Perhaps you could enlighten us, Anonymous, as to what comics you consider not "as well drawn as they used to be" so we can better understand your viewpoint? I read a lot of modern comics and the standard is incredibly high.

I'm sure one could pick flaws with one or two artists not having the same qualities as the best in the field but that was always the case for every generation.

As for kids' comics not being as funny as they used to be, as I said, that's perhaps because you're older? For example, I don't watch children's TV or read children's books because I'm not the target audience so I don't expect to find them funny. (I still read kids' comics because it's the line of work I'm in.)

Large amount of my collections are Kids TV shows and Book from the past, mostly 60s to 80s, with a few from the 90s. I don't want new stuff to be done just like them, cause it wouldn't be the same. They have had there time, they are over. Simple as that. Sure, it's nice to find 'lost episodes' i've never seen, but you can not recreate the past.. Sad to me, but true. Things and people have to change and evolve. One thing i have a dislike for is 'reunions'.. It's like the Last 'To the Manor Born' special. They tried to recreate the old series in ways.. i didn't like.. I don't really think much of that special and believe it would have been better just to leave it alone. I can probebly name comics like that too, if i had to think about it... The Past is the Past.

I think original Bananaman transferring to The Beano is genius. Especially that tag line 'once Nutty... Always bananas'. It might seem odd at first, but he used to be in Nutty, then Dandy, nothing stopping him being Beano. Didn't Beryl move about a bit too? What about Roy of the Rovers, he's been in loads.

No reply from the original "Anonymous". I think I'm going to disable the Anonymous option as it's only confusing matters. If people have such strong opinions, why not put their names to them? Don't be shy folks.