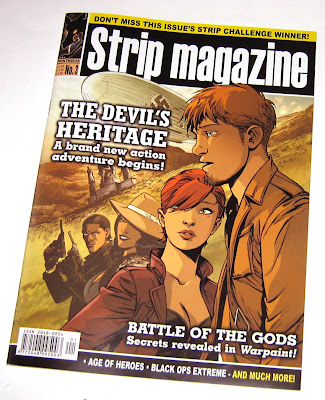 Only three issues in and already Strip Magazine feels like an old friend one looks forward to re-acquainting with every month. There's a few surprises this time too, with the debut of two new stories. First off, the European serial The Devil's Heritage kicks off with a 10 page first chapter. Set in 1938 this intriguing thriller is written by Jerome Felix and nicely illustrated by Paul Gastine. I'm already hooked and eager to know what happens next. 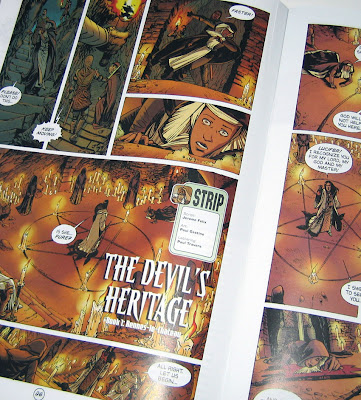 The other new strip is Bogey-Man Bob, also from an international source, taking up the back cover. This should appeal to old fans of Frankie Stein (and to new readers) and features attractive cartoon work by Gerard Leever.

Sadly, Recovery Inc. isn't in this issue, and further chapters have been postponed until later in the year. I suspect its absence may annoy some readers but The Devil's Heritage is an excellent replacement.

There's another six pages of Warpaint by Phil Hester and John McCrea, with the story developing well. It manages to strike a good balance between being a fast paced action strip and something deeper, which isn't always an easy feat to pull off.

Black Ops Extreme this issue is a self-contained flashback episode written by John Freeman as ever and drawn by guest artist Nick Dyer. In tone, this is probably the closest strip in the comic to IPC's Action, albeit with a modern approach. Well, if we discount the Hook Jaw reprint of course. Speaking of which, the body count continues to rise as the great white shark claims more victims.

Age of Heroes continues, by James Hudnall and John Ridgway, with the luxury of 11 pages. I only recently became aware that this originally appeared in an Image Comic series in the 1990s but I'm sure that, like for me, it'll be new for many readers. Indeed, it's still fresh and worthwhile even if one has read it before as John Ridgway is colouring his artwork for Strip Magazine. (I understand it was in black and white in the original printing.) This issue also includes an interview with John where he mentions continuing the series beyond its original chapters.

The aforementioned Nick Dyer also illustrates another strip in this issue in the form of Black Dragon, written by Richmond Clements. The character will return at a later date in an ongoing series. 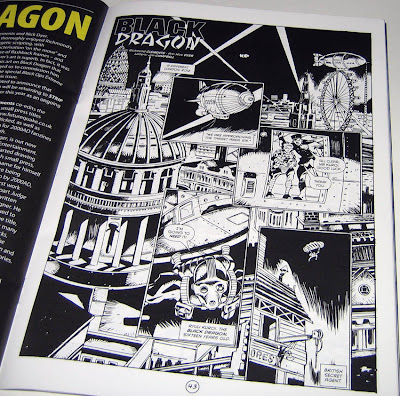 Another couple of features include an interview with writer and artist Jason Cobley and an article on IPC's fondly remembered Starlord comic.

At present, unless you subscribe, Strip Magazine is still only available to buy from comic specialist shops. Issue 3 should be available now, although I know of at least one Forbidden Planet that still hasn't had their copies from the distributor. Hopefully that will be rectified this Wednesday if not before.

I know that some people think that the comic should have been available in newsagents from the outset but sadly in this day and age that isn't practical for new publications without the sort of budgets that big companies can afford. Print Media Productions are doing this right; starting small and building up. While some people do little but complain about the state of comics, John Freeman and the contributors of Strip Magazine are out there doing something about it. I know who gets my respect.

Strip Magazine continues to develop nicely and is a great bargain at 68 pages for just £2.99. (Most US comics cost that just for 20 pages of story.) It's well worth your support.

Got the ipad version of this a week ago and still going through it. I like it very much and would prefer to see it on a weekly basis. I dont mind the idea of re printing strips from times gone by. In fact I wish we could see more of these classic strips.

Nice review Lew. I've bought a digital version, and it's great work. I'll be seeking out the print version.

Feels like an exciting time for British comics: Strip, The Phoenix, lovely stuff from Blank Slate, a move into story albums by Nobrow and sterling work from the old stalwarts. And a comic-themed stamp set later in the year from the Royal Mail. Exciting stuff!

I've been buying on iPad too and thoroughly enjoying it. It's a high quality package and ridiculously cheap in comparison to ... well, just about everything else out there.

My only reservation is that it reminds me of when Warrior started thirty (gulp!) years ago. I read the first couple of those thinking it's great but will never last and I'll miss it when it's taken away.

Still, we got 26 issues of Warrior over three years and it still casts a long shadow over UK and US comics - hopefully Strip will last longer and be just as influential to the next generation.

It's a shame when previous experiences lead us to expect a comic to eventually fall, but I know what you mean. However, even those that only lasted a couple of years (such as Oink!) were not deemed to be failures by the editors or publishers.

As with anything in life the best we can do is appreciate what we have while we have it. Strip Magazine is off to a good start and any problems it's experienced so far have not been of its own making (eg: delayed shipping, distribution) so once those teething troubles have been sorted out it should be even better.

My copy of Issue 3 has finally turned up.

Interesting that Black Ops Extreme seems to have been bumped as lead strip in favour of Warpaint. I wonder if that, combined with the one page "Strip Intel" explaining what the strip is about, suggests that it's not connecting with the readership ? Certainly after three issues the characters and premise haven't really clicked with me at all and I think it's the weak link in the comic.
On the plus side, I actually prefer the fill in artist Nick Dyer to PJ Holden. Also enjoyed Dyer's other strip Black Dragon. I can see why they have picked this up for a series as it has the kind of strong leading character that Strip seems to be short on and packs a lot of action into a few short pages. Dyer's art recalls early McMahon or Cam Kennedy which is never a bad thing.

Elsewhere Recovery Inc has vanished altogether just as it was starting to show some promise which seems very unfortunate (missed deadlines perhaps ?)
The Devil's Heritage is an intriguing replacement though.

Enjoyed the article on Star Lord a comic which always seemed to me to have been killed off before its time (although 2000AD has been much the stronger for it ever since !)