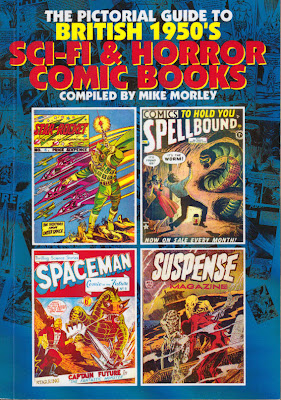 If you thought that reprints of American comics began in Britain with Marvel UK in 1972, or even Odhams and Alan Class in the 1960s, this book will be a revelation. The Pictorial Guide to British 1950s Sci-Fi & Horror Comic Books is a chunky 288 page full colour softback on quality paper compiled by comic historian Mike Morley. 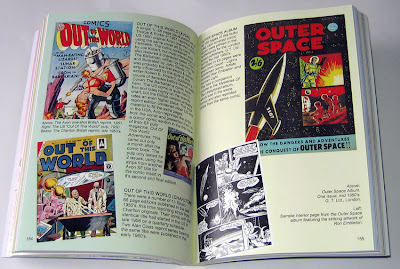 Here you'll find information on numerous UK comic books of 60 years ago including Captain Marvel, Race for the Moon, The Human Torch, Adventures into the Unknown and many more, some very rare or even forgotten. 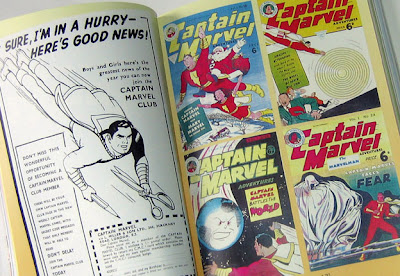 There were dozens of different titles and not all of them contained American reprint. Many were home grown British comics too, such as the Tit-Bits Science Fiction Comics with fantastic artwork by Ron Turner. 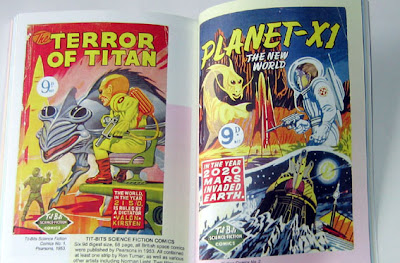 The book contains hundreds of sharply reproduced covers (and some interior pages) showing the sheer scale of the output of comics back then. Traditional British comics and story papers are also mentioned, when they fit the book's remit, such as Comet, Adventure, and Lion. 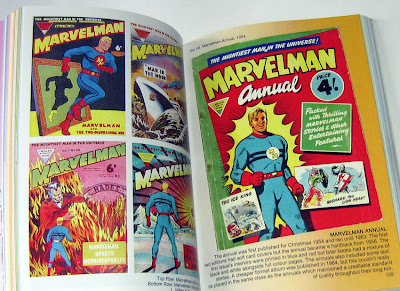 Marcus Morris may have created Eagle as an antidote to comics such as this but, as people who were kids back then will tell you, readers often didn't choose between Eagle or horror comics, - they bought both! Sadly, many of these comics were short lived, when, as the author tells us, the witch-hunt against comics in the UK spearheaded by the National Union of Teachers put such comics out of business as publishers feared prosecution if they continued. Dark times indeed. 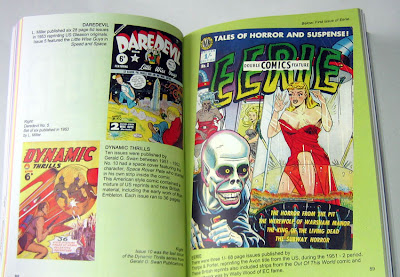 This book is a valuable asset for anyone genuinely interested in the history of comics. It covers a fascinating area of publishing that has often been overlooked so it's good to fill in the gaps in one's knowledge with something like this. Author Mike Morley keeps his writing tight and sticks to the facts, providing solid information without bogging it down with conjecture or dull story synopsis. The design of the book, by Mike Higgs, is also straightforward and clear, and packs a lot in for your money. 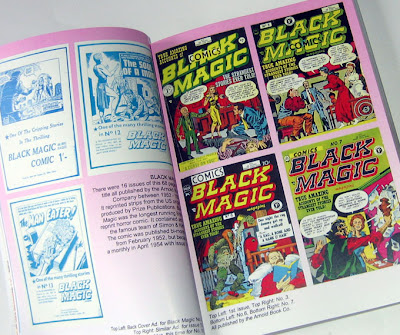 The Pictorial Guide to British 1950s Sci-Fi & Horror Comic Books can be obtained post free in the UK by sending a cheque in Sterling for £14.95 payable to Blasé Books at:
BLASÉ BOOKS,
Hazelwood,
Birchfield Road,
Redditch
B97 6PU
United Kingdom

Alternatively you can order it via PayPal, also for £14.95 (Sterling) to blasebooks@aol.com

Please note that this post free price only applies to orders in the UK. If you live outside of the UK and want a copy please e-mail Blasé Books at the aforementioned e-mail address and they'll tell you how much postage will cost to ship the book to you.
Posted by Lew Stringer at 18:00

There was a book like that in the 70's or 80's I have. It made out that British comics were some worthless short-lived nonsense that people had to "put up with" until American imports resumed properly. Yours for a tenner.

This one isn't like that thankfully. It gives the comics their due.

Felneymike: what's the name of the book you're talking about, do you know?

Erm, oh dear. It appears to have dissapeared down the lock-up to make room for Dan Dare and Modesty Blaise reprints.
Aha, Ebay research shows the title is "Nostalgia About Comics", and it's actually from 1991 XD

I don't have my edition of that book to hand either but as I recall it was an affectionate tribute to those comics, rather than treating them as worthless?

My copy of this wonderful tome arrived this morning, I have only just put it down and felt duty bound to leave a comment - absolutely great, I have just reluctantly sold my 50's collection as times are hard but this will at least keep the memories alive.

That's fast service! Glad you enjoyed the book Peter. I recommend 'Great British Fantasy Comic Book Heroes' as a companion book if you can afford it as it reprints many of the strips from those old comics.
See review here

NOSTALGIA ABOUT COMICS WAS A FANTASTIC BOOK WORTH EVERY PENNY. THEY DON'T MAKE COMICS LIKE THAT ANYMORE MORES THE PITY.