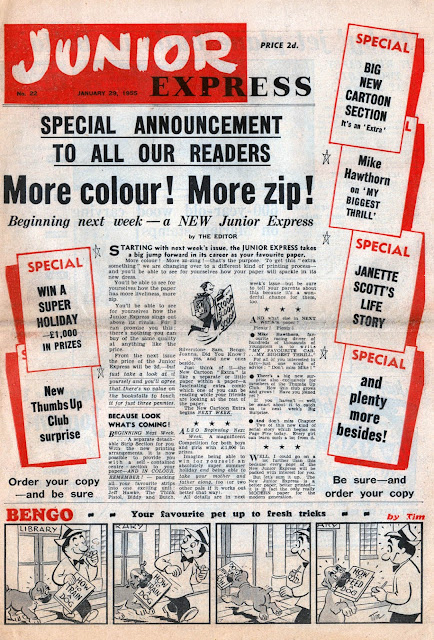 I've blogged about Express Weekly here before, and its later incarnation as TV Express, but here's the comic in its original form! It wasn't even a comic back then really. Junior Express was basically a newspaper for children, - as its title implies, it was a junior version of the Daily Express. Tabloid size, and printed on cheap newsprint, it was launched in 1954 but the issue I'm showing here is No.22, dated January 29th 1955.

(Update: I'd presumed from the cover story that this issue was the last in the newsprint format before it switched to glossy photogravure the following week. However I'm reliably informed by Jeremy Briggs and Graham Bleathman that it continued for another year in newsprint before improving to photogravure with issue 75.)

At the foot of page one you'll see Bengo, by Tim. This character later appeared in the Blue Peter Annuals. As you may know, Tim (real name William Timyn) also created and illustrated Bleep and Booster, which was a static frame cartoon story that sometimes appeared on Blue Peter in the sixties.

Junior Express had 16 pages but comic strips only appeared on two full pages, a half pager, and a few mini strips. (It would later be practically all-strip when it became Express.) One of those strips was The Think Pistol. I'm not sure who the artist was but going by some of the techniques and the style of speech balloons I'm wondering if it might be by Chas Sinclair? 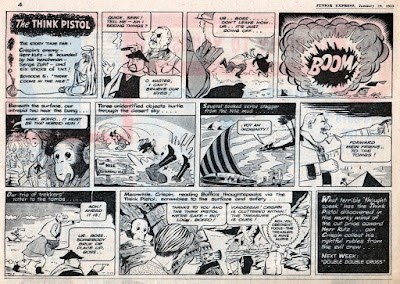 Jeff Hawke first appeared in the Daily Express of course but new strips, not by Syd Jordan, appeared in Junior Express. Unfortunately they're uncredited, as is its companion strip Silverstone Sam. Also unfortunate is that the colour registration is off. No wonder they upgraded the printing later. 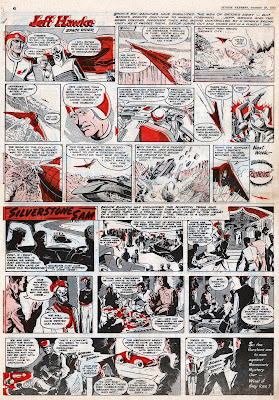 Joanna of Bitter Creek gave us a spirited heroine. (Junior Express was aimed equally at girls and boys.) Art by Jac Darrel. Its companion strip, Biddy and Butch, carries no credit but I'm sure it's the work of Cyril Price. 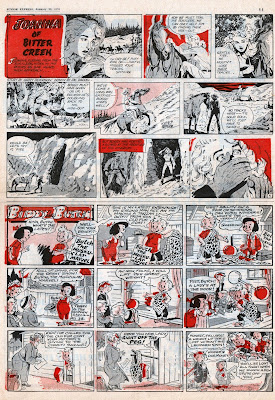 As previously noted, Junior Express was mainly a newspaper, and here's one of its feature pages; Junior Show Page with a few items of interest. The mini-strip, Cap and Crew, is by Roland Fiddy (1931 -1999), a very popular cartoonist of the time. 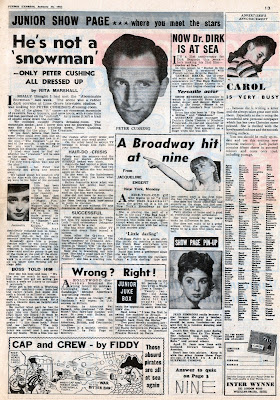 Here's a couple of adverts from this issue. Firstly, an interesting one from the days when Lucozade was considered by the medical profession to have "remarkable" health benefits. Attitudes have changed somewhat now, but all I know is that whenever I was laid up with a virus as a kid, it certainly made me feel better when my mum brought me a bottle of Lucozade. (And that plastic amber outer wrapping made it look something really special.) 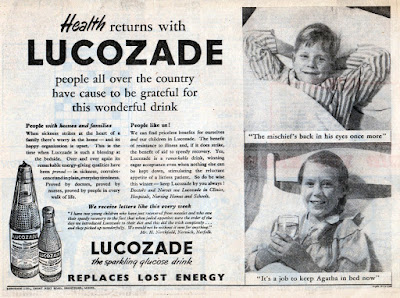 Now here's possibly the most important advertisement of all, because it settles a debate about Wagon Wheels that's been going on for years. "They used to be as big as your hand" say people today. Well, here's the evidence that 60 years ago they were 3 1/4" in diameter. Are today's Wagon Wheels smaller, or is it simply that our hands were smaller then? Measure one and let me know! (A Wagon Wheel, not your hand.) 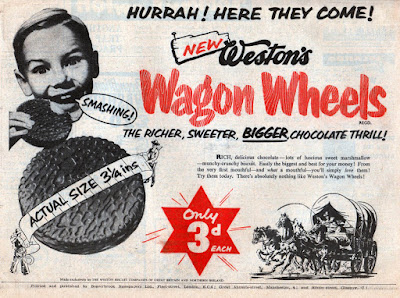 Never heard of it Lew, and more Jeff Hawke that I haven't heard of?!
Such a shame that this classic SF has not been reprinted (UK) and yet widely available in parts of Europe and the States too at one stage. Titan to their credit have given it a go a few times, but unfortunately no more collections came along.
Interesting stuff.

Sadly the Jeff Hawke collections didn't take off commercially here but the strips are reprinted for members of the Jeff Hawke Club. See here:
http://www.jeffhawkeclub.com/

Wagon Wheels are 3 inchs these days. 1/4 of an inch smaller so about 7mm.. so we know now the truth! (yep, measured one).. that said, I think they might be a bit thicker these days..

Excellent. Thanks for your research, Agent Manic! You may now eat the Wagon Wheel as a reward. (What? You already did?)

So the difference in size is so insignificant they're basically the same as they used to be. Just goes to show how nostalgia can distort the memory.

"Tim" also drew another dog strip, "Caesar," which ran in the Chicago Tribune in 1950 (as a brief replacement for the once-popular "Gumps").

I got three inches for a diameter to Wagon Wheels in Asda last night according to the ruler app I downloaded on the way in. Couldn't resist. Now to find out how big Creme Eggs and Mars Bars were...

Mars Bars are definitely smaller than they were 50 years ago, - or at least I think so. I remember the chocolate being thicker.

I bought a four-pack of Mars bars the other day as pre-run snacks - "4 for £1!" - they were almost Fun Size bars! The full-size individual ones aren't much better. So it's not just us getting bigger then.

Yes, those economy packs definitely have tiny bars. A few years ago you would get 4 full size bars for a pound, but now, like many things, they've kept the price stable but reduced the content.