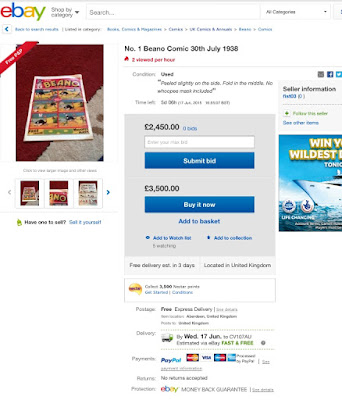 This week a new seller with zero feedback tried to sell "No.1 Beano Comic 30th July 1938" on eBay. (See screen grab above.) It was of course a reprint that had been given away a few years ago in The Sunday Post, but the listing didn't say that. However the seller  had set his starting bid at £2,450 or a Buy It Now at £3,500.

Fortunately no one fell for it, and perhaps it was reported because the listing was suddenly removed earlier today.

The reprint on eBay had glossy paper, "25 pages" (he meant 24), staples, and was sharply trimmed. In case anyone didn't know, the real Beano number 1 was printed on cheap newsprint, with 28 pages, a glued spine (no staples), and wasn't neatly trimmed. Plus it'd be very unlikely to have pure white paper after all these years.

It's not the first time someone has tried to sell a Beano or Dandy reprint as the genuine article and I'm sure it won't be the last.
Posted by Lew Stringer at 20:02

I think I would be prepared to pay money for a comic with 25 pages. I would be a miracle of nature, after all.

Now there's a thing, Lew I never knew that the original Beano #1 had a glued spine . Something new every day and all that.Couldn't have been much of a spine ,mind, with only 12 sheets of newsprint , eh?

Since most of the time, huge price comics aren't sold to fans but to 'collectors' who just wish to own and then sell for higher price.. I would love to say and idiot falling for something like this gets what they deserve.. BUT... I can't really.. that price range is high but still within the range of rich fan so fans could be screwed.. though most likely, the seller is one of the very people I said about.. they got it cheap to sell on later to screw over people....

I've never bought anything on e-bay and I've only looked at the site a handful of times so I don't know much about it but couldn't the seller be prosecuted for that kind of deceit ? If somebody fell for that con and paid several thousand pounds would there be a way to get the money back or would the seller just disappear into the ether ? Makes me glad I don't use e-bay.

Gavin, you'd be amazed at the number of times people say comics have an odd number of pages. They must be from an alternate universe that defies the laws of physics.

Paddykool, The Beano had a glued spine for about 50 years! As did most DC Thomson comics up to about 1990 or so.

Manic, I don't think anyone would have fallen for this, even people with more money than sense, but you never know.

Colin, EBay would simply ban them rather than prosecute. And if anyone had bought it, I suppose more serious action would be taken. By the way, eBay is fine mostly. Buyers can leave feedback so you can read how previous sales went. If someone has a lot of negative feedback, avoid!

Things like this are a rarity and often too transparent to con anyone. I saw someone complaining about tatty comics they'd bought the other day, but the photo in the listing clearly showed them to be torn and tatty anyway. Quite often you get what you pay for and if people don't look at the listings properly they shouldn't blame the seller for their own laziness.

paddykool, your maths is bad - 12 sheets doesn't make 28 pages. It's seven sheets, each folded in half and printed on both sides, so one sheet is four pages.

I think paddykool imagined it as 12 A4 sheets glued squarebound, James. But, yes, 28 pages would still be 14 sheets in that case. Anyway, not worth focusing on such minutiae is it?

I thought I'd said 24 0ages...how was that conflated to 28 pages?...now the glued spine...I'd just never thought about that.Mind ...come to think about it ...all those Lions and Tigers had staples which always rusted into the paper....

You did say 24 pages but as I said in the post, the real Beano No.1 had 28 pages with a glued spine.