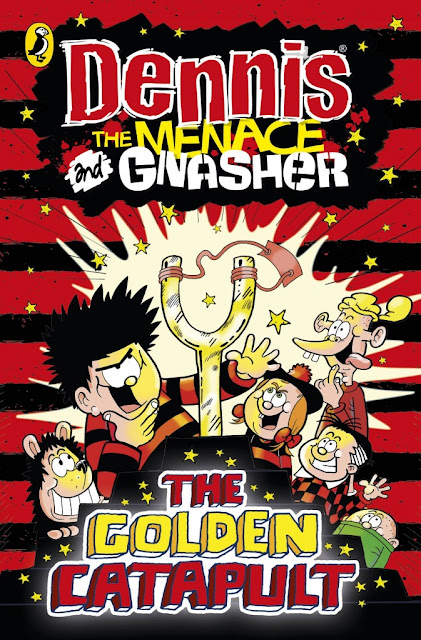 Diversity is the key in the British comics industry today. Solely relying on the old 'business model' (hate that term) of traditional comics in newsagents isn't enough. Using the characters in other formats is a good way to reach more readers, whether it be graphic novels, digital comics, or whatever.

Case in point, the new Dennis the Menace and Gnasher book The Golden Catapult by Cavan Scott and Nigel Parkinson. On his blog, Cavan says "The Golden Catapult is a bit different. It’s part novel, part comic, part puzzle, and stars loads of Beanotown favourites including Dennis, Minnie the Minx, Roger the Dodger, Calamity James and the Bash Street Kids".

The book is to be published by Puffin on 1st October and they describe it as:
"STONKING STORY! COOL COMICS! AWESOME ACTIVITIES!

When Dennis, Gnasher and the rest of the infamous Menace Squad find out about a rare and legendary artifact, they set off on an amazing adventure to track it down. Only the most menacey Menace will get to it first!
Read the story and complete the puzzles to find out who will reach . . . THE GOLDEN CATAPULT!"
For more info keep an eye on the blogs of writer Cavan Scott and artist Nigel Parkinson.
Posted by Lew Stringer at 16:52

while I'll probably not pick this up, this kinda thing has been part of the comic scene for along time and it's really about time it gets a bit of respect for what it is. I can't remember the name of the series of the top of my head, but I used to love a series of 'mystery/adventure' books which were kinda graphic novels with puzzles etc.. they were English. They did them a lot in the 80s and 90s..

Always good to see companies embracing the wide range that the 'comic book' term applies to.