Are you ready for ICE?

One of the most enjoyable comics conventions I attended last year was the International Comic Expo in Birmingham, - and it's back again next weekend! Situated in the city centre just a few minutes walk from New Street Station at The Studio venue in Cannon Street, just off New Street. I'll be there, along with many other guests from the comics industry. Here's the details from organizer Shane Chebsey....

THE STARS OF COMICS ALIGN IN BIRMINGHAM

Some of the biggest names from the world of comic book art and publishing will be descending onto the Studio Venue in Birmingham city centre this coming weekend.

The International Comic Expo, or ICE as it is known by the fans, plays host to over 30 top artists and writers from both sides of the Atlantic and beyond. On Saturday 5th September, in the heart of England’s second city, expect a spectacular fun day for fans of popular characters like The Avengers, Spiderman, Batman and The Flash.

Of course comics are far more than just super heroes and visitors to the annual event will also be able to meet creators such as Charlie Adlard, artist on The Walking Dead and writer John Wagner, creator of Judge Dredd, who will be joined by co creator and artist Carlos Ezquerra who is flying in from Spain especially for the convention. 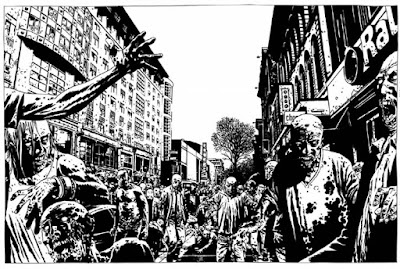 There are also guests from further afield making the journey over the Atlantic to see fans, including legendary Iron Man artist Bob Layton and Wolverine artist Joe Rubinstein.

In addition to the usual sketching and signing there is a full program of exclusive free events for ticket holders scheduled for the duration of the convention, including interviews with featured creators, fun quizzes, a workshop for kids and some more serious industry discussion panels.

Highlights include a free talk aimed at younger readers and fans by Watchmen artist and Comics Laureate Dave Gibbons, plus an interview with Green Arrow and Losers writer Andy Diggle.

Unlike many UK conventions ICE has a strong international presence and joining the major UK Publishers like Titan Comics are representatives and editors from American publishers including DC Comics, Dark Horse Comics and the most recent major addition to the industry Aftershock Comics who is represented by Editor In Chief Mike Marts, who recently left Marvel to help form the new company.

Of course no convention is complete without a varied selection of exhibitors, and ICE is no exception to this.
As well as thousands of comics and graphic novels, there will be collectibles, merchandise, and original artwork for sale from over 120 exhibitors, so plenty of chance to fill those gaps in your comic collection, or to own a unique piece of artwork form your favorite creator.

Not only that, but the ICE exhibition halls feature a huge selection of independent and small press publishers, who offer readers a whole new level of diversity and really show everything the medium of comics has to offer.

And if you’re not quite sure what all the fuss is about when it come to comics, entry to the event is just £12 (£6 for students) and kids go free, so you won’t have to break the bank to satisfy your curiosity and discover something new for all the family.

The event starts at 10am for those booking in advance with doors opening to the public at 11am and closing at 5.30pm. There is also a special VIP after show party running 7pm until late for the most dedicated fans, all happening under one roof, just a few minutes’ walk from New Street Station.

To book tickets for the expo and to find out more go to the main website at: www.thecomicsshow.co.uk
Posted by Lew Stringer at 23:56