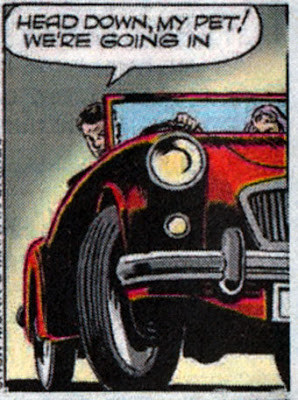 This was a surprise. From today, the Daily Mirror is starting a series of reprint strips featuring their private eye character Buck Ryan. The strip originally ran in the paper from 1937 to 1962 and was a favourite of readers for years. (I remember my mum and dad talking about it.)

The reprints begin with the first episode of the serial Road Raiders from 1959. The artwork is by Jack Monk and was originally published in black and white but colour has now been added by Martin Baines and he's done a nice job of it. Click to see it larger:

While it's great to see this classic character making a comeback it's a shame the reprint replaces Horace by Roger Kettle and Andrew Christine after a run of over 20 years. This now means that half of the Mirror's strip page is from the archives, with Garth and The Perishers also being reprint and only Andy Capp, Mandy, and Gag Vault being new. Over on the official Horace Facebook page, Roger Kettle made the following announcement:

End of an Era
Those of you who read the "Daily Mirror" or "Daily Record" may have noticed a Horace-sized gap in your paper today. Sadly, after 26 years, the strip has made its final appearance. Due to the financial situation at most newspapers today, severe cuts are being made and Horace is a victim of these circumstances.
Andrew and I would like to thank all those readers who have followed our daft little characters over the past quarter of a century---it really is appreciated. Who knows---maybe Horace, Mojo, Granny and the rest will pop up somewhere in the future. In the meantime, thanks again.
I'll leave you with a line from Granny to the outlaw, Jesse James...
"Son, you've got a big mouth and a girly name---neither of which will stop a knee to the groin."
Keep smiling.
Roger Kettle.
It's very sad that once again cutbacks have affected comic strips. During World War 2, when paper rationing reduced the Mirror to just 8 pages a day, it still devoted over one page to all new comic strips. Today, with the paper regularly carrying 64 pages or more, its one page of strips is half reprint. Whilst no one would expect it to devote an eighth of its content to comics now of course, it's disheartening to see how strips have become such low priority. How times change. Roger Kettle and Andrew Christine are two of the funniest strip creators in the world (been a fan since the first episode of Beau Peep in the Daily Star back in the 1980s) and I wish them both well for the future.
Posted by Lew Stringer at 22:01

A shame to see "A Man Called Horace" go.

It's a long time since I've read the Daily Mirror but it used to have some great strips, The Perishers, Andy Capp and Scorer.

I seem to recall there was also a "George and Lynne" style strip for a while. I think it was called "Girl Talk" and I think the artist was John Burns.

Yes, the Mirror's had some excellent strips over the years. Andy Capp is still running, with new episodes every day. Perishers is in there, but a reprint (and resized smaller than its original size).