Bright and breezy Brighton for the ICE Summer Special

Saturday 10th June saw the ICE (International Comic Expo) Summer Special take place at the Hilton Metropole, right on the seafront at Brighton, and a fun day it was indeed.

I'd arrived on Friday, in time for the launch party at a local pub, where it was great to catch up with Jessica Kemp, Gary Millidge, John Charles, Mike Conroy, Ken Gunstone, Paulina Vassileva, Dave Gibbons, Tim Pilcher, Chris Weston, Clint Langley, and more. A very pleasant evening that flew by too quickly.

The Comic Expo itself was on Saturday, a gloriously sunny day to be outdoors, although of course we were indoors at the Hilton. The venue was great though; nicely air conditioned and with a good layout. Comics guests and dealers were in one large hall, with talks taking place in another hall next door.

Organiser Shane Chebsey and his team have always put on a good show for the ICE events in Birmingham and likewise for this inaugural Brighton expo. The friendly team are always accessible and attentive to guests and visitors, making the events some of the most enjoyable and relaxed comics shows in the UK.

Here's a few photos I took at the show. As usual, I never take enough to do the events justice but you'll get a taster from these pics...

1: With our tables set up, we await the opening of the show. Some early bird arrivals talking to Simon Myers, cover artist extraordinaire of Titan's Doctor Who comics amongst other illustration work. Check out his website:
http://prettyfunky.com/wordpress/ 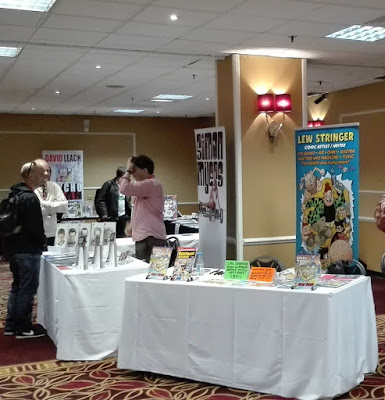 It was great to finally meet and spend time with Jessica Kemp, publisher of the upcoming Missed Deadline magazine. Keep an eye on the mag's Facebook page for developments!
https://www.facebook.com/MissedDeadline/ 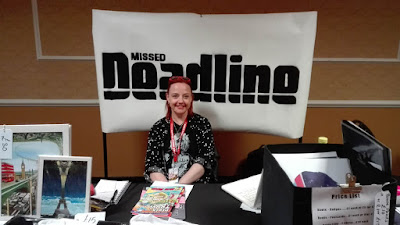 Brilliant to see the ever-affable Dave Gibbons at the show. Here he is signing comics and books for attendees... 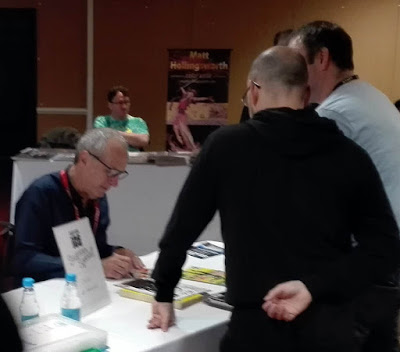 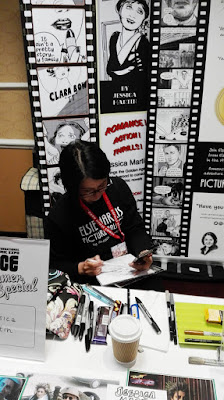 The mighty Etherington Brothers were there too! Here's artist Lorenzo Etherington and his fantastic work.
http://theetheringtonbrothers.blogspot.co.uk 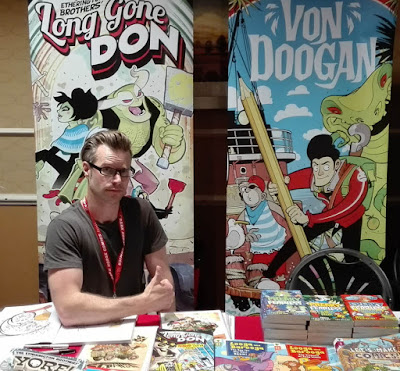 Steve Tanner of Time Bomb Comics had a table too, and it's always good to catch up with him. Here he is promoting Flintlock No.2 which I'll be reviewing soon.
http://www.timebombcomics.com

A couple of shots of the convention floor. Pat Mills in the pink shirt on the left there talking to fans. Pat was promoting his new books which I'll be reviewing soon.
https://www.millsverse.com 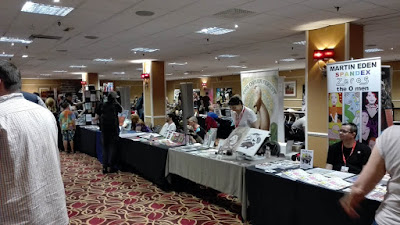 The comics news and rumour website Bleeding Cool did a quick video walkabout on the day, which you can see here:
https://www.bleedingcool.com/2017/06/11/walking-around-brighton-ice-comics-expo-2017-from-deadline-to-live-wires/

My thanks to Shane Chebsey and the gang for a very pleasant event, and also thanks of course to everyone who stopped by my table to buy comics and/or a sketch. Thanks also to David Leach and his family, Olly MacNamaree, Samuel Savage, Jeff Chahal, Jim Stewart, Valentina Sannais, and more for being great company.

Apart from a flying visit years ago, this was my first trip to Brighton so I stayed over until Monday for a mini-break. Time to get back to work now as my next convention will be the Birmingham Comic Art Show (part of the Birmingham Comics Festival) on Saturday 24th June.
https://birminghamcomicsfestival.com
Posted by Lew Stringer at 14:57

Shame I couldn't make it even though it was fairly close to me. Sounds like you and others had a great time thought.

There's always a great atmosphere at the shows that Shane puts on. It was a great tonic to hang out with everyone there.