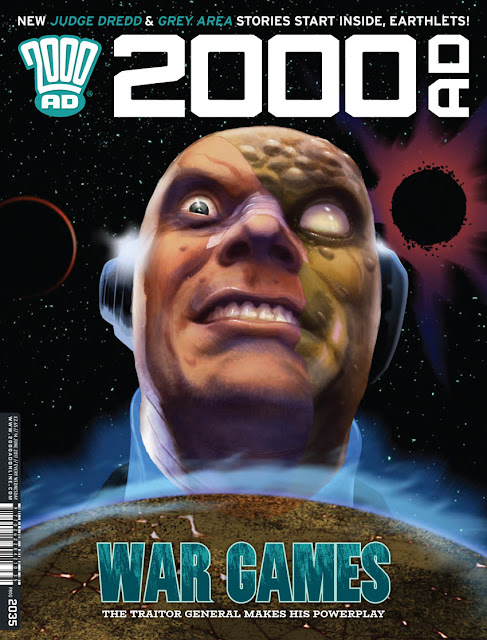 One of the things I love about 2000AD, apart from it featuring the best talent in the business, and apart from it being the last man standing of the old weekly adventure comics, is that it still uses the sort of toplines over the masthead that address the reader. This is a tradition that dates back to the early 20th Century British comics and it's great that it survives to this day. Admittedly it's trivial, but to me it's something that shows 2000AD is acknowledging its legacy, and reminds me of the "Great new stories start inside, pals!" toplines of long ago.

Here's the info and previews of the next issue, on sale this coming Wednesday... 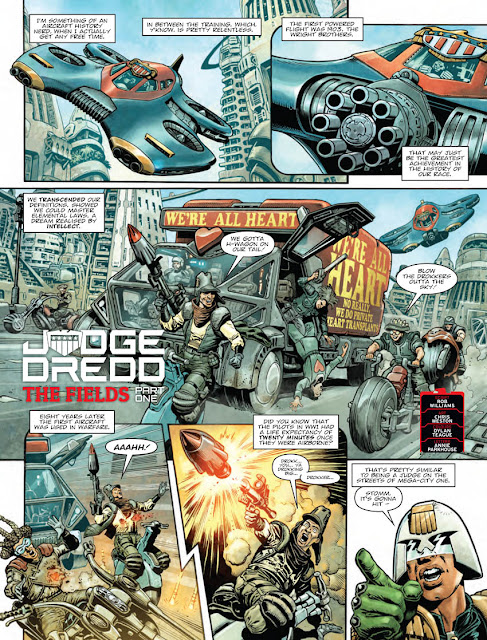 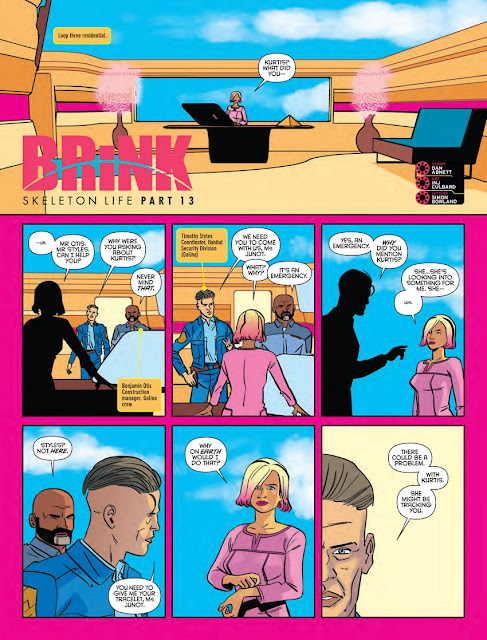 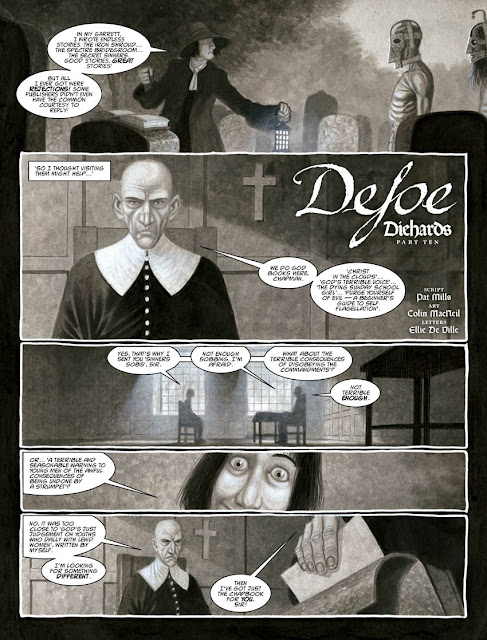 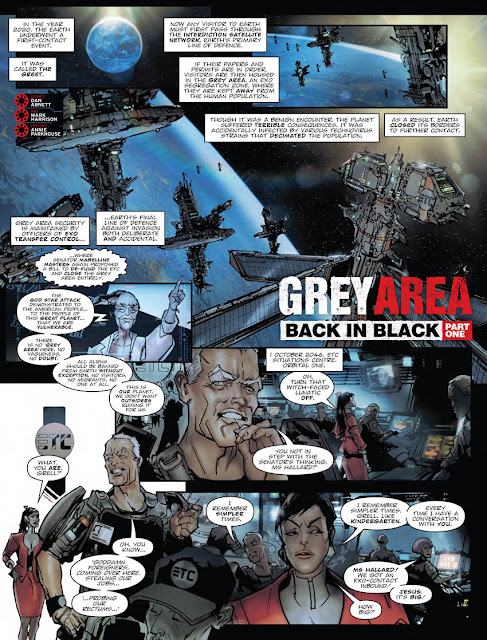 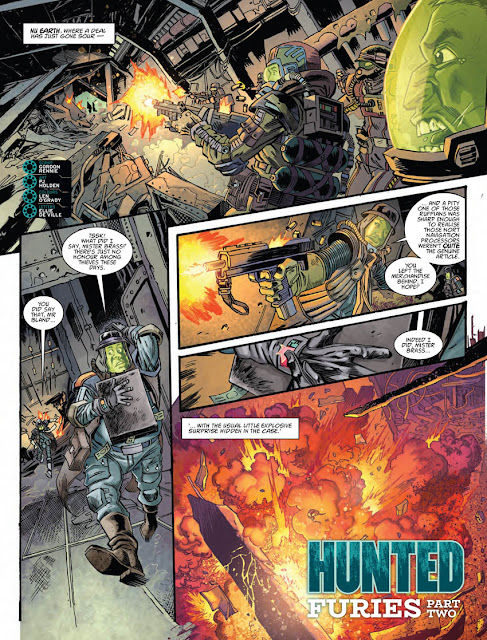 Tremendous left-wing, anti-Brexit echo chamber bias as usual from 2000AD. Perhaps it's pointless raising even the slightest murmur of devil's advocatism, but here goes. From talking to the few people who would admit to me are fellow-Brexit voters, it seems there is agreement that the main reason it happened was a result of East European immigrants being unwilling, as opposed to unable, to engage in English conversation anywhere in public, having established their homes here. In the town where I lived until recently, virtually all non-East Europeans disappeared, further entrenching the domino effect of migrant settlers feeling no obligation whatsoever to adopt English language as anything other than an inconvenience of the job sector.
Walking down a street you have lived for years to never again hear an English voice is alienating, an effect as inevitable as it is unintentional. You are locked out of your own community, to the point that it is no longer shared except physically, if that. Those mobile enough to move to costlier, more English-centric areas do so, but those with little income, or too old to extricate themselves, get left behind and feel all the more resentful and unwelcome, even though
This language discrepancy appears to be a rather new phenomenon, regardless of what Alt-lefters would argue. Prior generations of major migration would generally already be comprised of native English speakers, such as those of from the West Indies, or would be those keen to adopt English as their primary language, such as people from India and Pakistan. There can be little heathy cultural interaction and amalgamation when the drawbridge is pulled up by those settling here and refusing to abide by the norm of the dominant language, by deft of their numbers. They have right to do this, but British nationals have a right in turn to refuse in law whether to allow this to continue at the rate it has, or even to reverse the flow. The latter would be brutally challenging to the economy and critical services, but it seems to me that there is something more to most of the populace than even own lives, which is a sense of belonging and place. This has been undermined by our open border policy, but the youth-dense cities of the UK are largely not exposed to the alienation that older generations are on facing vast alteration of their communities. When you’re young, you naturally will have large circles of same-language friends dwelling in close proximity to you, with whom you have regular and generally affirming contact with, a situation obfuscating the salary-static and responsibility-laden reality of modern adult life.
Other matters such as housing, jobs etc have obviously played a large part in Brexiters concerns, but how legitimately is much more a matter of contention. There is no doubt migration contributes immensely and critically to the economy, but the cultural issue is something that has been massively downplayed by the left-wing media, including 2000AD, with its predictable Trump and Farage-baiting and hackneyed on-the-nose immigration parables, largely predicated on false-equivalency. Concern over migration should not be confused with racism, which must be tackled with ever better education and people of all races getting together to talk things through and realising that all human beings have far more in common than we have things that divide us.
Of course, much of what I have said may be written off as cognitive bias, but that is not a phenomenon isolated to the so-called right. Brexit is something to be ashamed of, not celebrated, but I and many others I know consider it to have been over something even more important than the comforts (or even necessities) that only EU membership can provide. Others may disagree.

The "left-wing media" is often drowned out by all the right-wing press unfortunately. 2000AD being one of the few voices, but that doesn't even remotely compare to the circulation of things like the Daily Mail, Sun, Express, Star, etc. or stirrers such as Farage. All of whom have generated exactly the same points that you have here.

I've heard the "immigrants don't integrate" argument loads of times, and they used to say exactly the same thing about people from India when I was a kid. (Amd before my time they said the same about the Chinese.) I made the effort to get to know some of them. Integration is a two way street. Have you tried to engage your East European neighbours in conversation?

Yes, most seem disinclined to talk to non-Polish speakers and appear to resent any attempt to engage them in casual conversation, and I would know, as I’d lived amongst them almost exclusively for the last eight years. Perhaps the fact I’m black doesn’t help, but my colour has never been a problem for any other ethnic group I’ve had the privilege to live among. I’m a gregarious guy, but I know when I’m not welcome and I’m not going to batter my head repeatedly against a brick wall.

Re the Chinese, there aren't enough here to make a comparison re: cultural impact, and again, I would contend that Indians have at least always made a tremendous effort to integrate on the rudimentary level of language.

Elective ghetto-ization is socially unfortunate and to everyone’s detriment, but can be worked with, at least with the communicative factor in place. But, for example, those Polish UK migrants who seem see non-Polish speakers as simply in the way – unless we are vocationally convenient- make it increasingly difficult for non-Poles to keep attempting to make a connection. We all of course need to keep trying, but the Brexit vote indicates that most of us who can be bothered to vote think that too much control has been taken out of our hands.

For the sake of argument, let’s take the hypothetical scenario of there being no borders in the world whatsoever, anyone can live here unrestricted and we can live anywhere the same way. Ostensibly it could be a utopia, but the likelihood is that everyone would want to live where the work is, and where it pays best.

If those countries had no control at all over who comes over, I doubt there would be anything to keep those countries attractive to live in for long, as they would all have to mostly accommodate subsistence level living, a stone’s throw (if that) from Communism – and having been born and bred in Romania, I know what that is like.

But I could be wrong – I’m willing to admit that.