Review: The Leopard from Lime Street In this, the second book in Rebellion's Treasury of British Comics line, The Leopard From Lime Street reprints the weekly episodes that originally appeared in Buster from 12th March 1976 to 11th June 1977.

This was during a period when I'd stopped buying most British comics so the strips are new to me. Well, not entirely true. I'd seen one or two episodes back then, and haughtily dismissed the strip as a rip-off of Spider-Man. On a very basic surface level, it certainly is, but The Leopard from Lime Street has a charm and excitement all its own, and the artwork is of the highest standard seen in British weeklies. 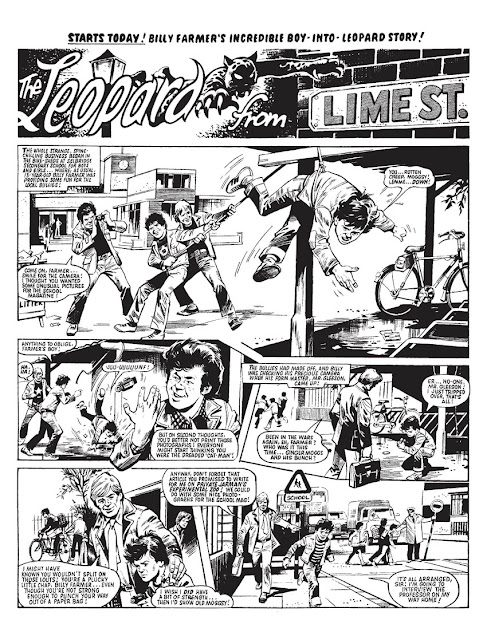 The plot: young Billy Farmer is scratched by a radioactive leopard and gains the strength and agility of a jungle cat. He makes a costume and sets out to fight crime, whilst taking photos for his local paper. Yep, the similarities to Spider-Man are glaring, but the British working class setting and distinctive UK storylines raise it above being a mere Spidey copy. Tom Tully's lively, fast-paced scripts carry the reader along, making the book an exciting page turner. The art, by Mike Western and Eric Bradbury is crisp and detailed, giving the strips a toughness and streetwise quality. It was very unusual in British comics back then for two artists to work as a pencil/ink team but it really works. In later episodes I'm guessing Western may have only supplied layouts, as Bradbury's style becomes more evident, but it's all great. Two of the best British artists working together? What's not to like? 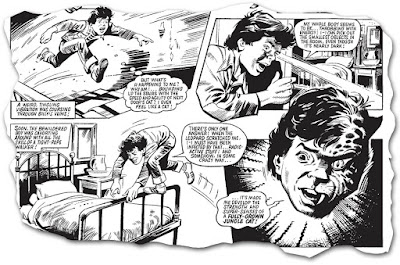 I know that The Leopard from Lime Street has long had a dedicated following in British comics and I've never really understood why... until now. The advantage of this collected edition is it gives the reader the opportunity to get into the storylines and put aside any concerns of the source that inspired it. 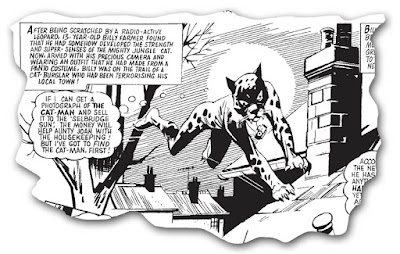 The book has an introduction by Steve Holland, and in the back there's a preview of forthcoming books in the Treasury of British Comics line, including Marney the Fox and Faceache. It's all looking good, so I hope fans of UK comics who have been clamouring for a return to the "good old days" will support these books so the line can grow.

Had the limited hardback version on preorder for a while now. So looking forward to it.

Really hope the range does well. Am genuinely surprised that the signed version of One-Eyed Jack is still available (there are only 200 copies! It's signed by John Wagner! Buy it, you fools!). Don't think I've ever willingly read an issue of Valiant and had never heard of the character, but bought that bugger anyway. Kinda count it as something of a tax; I buy stuff I've never heard of, the range is successful, they end up putting out some of the stuff I love.

I'm basically throwing money at them in the hope they end up publishing a multi-volume Reg Parlett collection.

I'm sure there will be something of Reg Parlett's work eventually. He worked on some great strips. I'm not sure how well individual books for, say, Mowser or Rent-A-Ghost would do, but it'd be nice to see a compilation of his stuff in one book.

I have the limited hardback on order too and got to say that I agree with Kal.

Unless Rebellion starting producing a volume ever week, I am planning to get every book (already have One Eyed Jack). Certain ones I don't expect to see such as Battle's Charley's War or Johnny Red but would love to see a volume on gems such as Valiant's Adam Eterno, Cor!!'s Chameleon Kid and Buster's Pete's Pocket Army just to name a few.

A pity Rebellion doesn't own the rights to Eagle (1982)'s Doomlord. Loved that strip.

I hear that Titan still have some time left of their contract to reprint Battle and Action material so Rebellion won't be doing that material just yet. (Titan are doing Hookjaw soon, and their Charley's War and Johnny Red books are still available.) As for Adam Eterno, I'd think that was a possibility. Kid Chameleon would be fun, and, yes, I'd like to see Pete's Pocket Army reprinted too.

I'm not familiar with this character other than his cameo in Grant Morrison's Zenith, which I enjoyed a lot, check it out if you are fan. I think there were other Valiant characters featured albeit with slight name changes, maybe to avoid copyright issues (such the Iron Talon replacing the Steel Claw, sporting the latter's ill-advised spandex get-up worn during a possibly ill-advised superhero phase).


Not sure why there's something strangely enthralling about post-modern takes on what were quintessentially one-dimensional characters. I understand that Alan Moore - reluctant godfather to that particular phenomenon - has totally disowned that particular phenomenon, but would probably approve these reprint of the originals if the writer and artist retained any rights or royalties. Alas, these were presumably work for hire.


I wonder though if Rebellion would at all reconsider, and throw the creators- or their estates - a bone for their contribution to comics history? ("Nice try, the combined estates of Mike Western and Eric Bradbury!")

Yep, I supplied 2000AD with reference for some of the characters used in that Zenith sequence. I'm not a fan of the strip I'm afraid. Seemed a very childish desecration of good characters.

In an ideal world it'd be nice if the people who worked on the Leopard (or rather their families) could get some gratuity but the economics and practicalities of the business are probably against it. Strips back then were often created by a staff editor before a writer and artist were commissioned to develop the ideas. If the character wasn't owned by the writer/artists then, it's a bit late now. Also, the low print runs on these books wouldn't leave much in the budget for royalties etc. (The hardback edition only has a print run of 200.)

PS, Re: Zenith. Although I didn't think much of the story, the art and lettering was great.

Looking forward to getting my mitts on this one. Again, I've plumped for the hardback as it semed such a nice package, but I'm just amazed this is seeing the light of day.

I'm also shocked the signed One-Eyed Jack is still available, but I'm sure it will sell out soon, as it's signed by the mighty Wagner.

Ah, Zenith Phase 3 - pure 2000ad marmite (personally, I adored it, but yeah, I can most definitely see people being upset with it).

My bookplate came unsigned, still a great book though.

I loved Zenith back then, story and art. Book 3 was and probably still is my favourite. I knew of some of the older characters from annuals from the seventies. I appreciate that not everyone agrees. The younger me loved it. Yeowell's art in 3 in particular was astonishing all scratchy speed lines and shadows. Peter St John, Maximan I thought it was the bees knees.

@Enigma: Did you look behind the front cover flap? The numbered cover print isn't the bookplate - that's tucked away under that flap. Something I discovered after a solid five minutes of swearing.

Thanks for the info, Kal. I hope it proves useful. (I bought the standard edition myself.)

It's great to read you were involved in helping Zenith source some of its character pantheon, Lew! Shame you weren't impressed with the story. Hopefully some (though likely not many) readers unfamiliar with vintage IPC characters will have been curious enough since Zenith's first appearance check out their earlier incarnations. It's amazing to think that the story is around a decade older than the IPC back catalogue at the time he was parodying him... to my mind that may partly be down to how modern Zenith seems even now, compared to the very linear boys'own adventure charms of its antecedents.

Whoops my print was unsigned, the bookplate was hidden under the cover fold and signed!

I have now, thank you. Yes it's there!