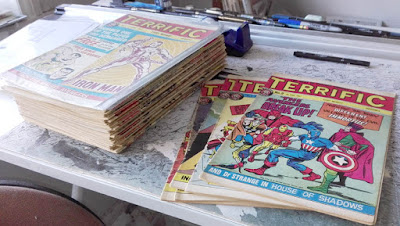 It was the 1960s, and England was swinging like a pendulum do, or so the song told us. It was a great time for pop culture though, and Odhams were at the height of their powers with five weekly 'Power Comics'; Wham!, Smash!, Pow!, Fantastic, and Terrific. The first three had a nicely balanced mixture of home-grown humour and adventure strips alongside reprints of Marvel strips, whist Fantastic and Terrific mainly contained Marvel reprint and one originated adventure strip (The Missing Link/Johnny Future in Fantastic, Don Starr in Terrific).

What's often forgotten now is that a few issues of Terrific also contained originated gag cartoons under the title of Frantic Fun. How did these come about? Well, when Mike Higgs submitted his strip The Cloak to the editors of Pow!, he mentioned that he also had some gag cartoons with him. They liked what they saw, and decided to run those in Terrific.

Back then, Mike Higgs signed his work as 'MiK' (or 'OMIK' as myself as some others misread it, due to the distinctively dotted 'i'.). Whilst The Cloak became one of Pow's main strips (and highly popular it was too), Frantic Fun was mainly a "filler" in Terrific. Even so, it was new content in a comic dominated by reprint, and they provided a nice light relief to all the drama on the other pages, so the cartoons deserve some recognition.

The cartoons that Mike drew started in Terrific No.6 on 13th May 1967 (cover dated 20th May), - the exact same day as The Cloak debuted in Pow! - and ran until No.10 (dated 17th June 1967). They'd clearly run out of Mike's cartoons by issue 10 as only one appeared, with others on the page drawn by 'J.Mead'. The feature ran for a few more issues (with J.Mead supplying cartoons) and was then quietly dropped.

I thought that readers of this blog might like to see those Frantic Fun cartoons by Mike Higgs as they're nice examples of his very early work, so here they all are. Mike's style developed in leaps and bounds over the next few years, so Odhams must have seen that his work had potential.

I've scanned the whole pages to show them in context. The News from the floor of 64 page from Terrific No.8 also mentions Mike, along with fanzine editor Tony Roche. While Fleetway and D.C. Thomson kept their contributors anonymous at the time, Odhams were very happy to name their artists and writers, and even helped to spread the word about the early days of comics fandom.
As many of you know, years later I was fortunate enough to work as Mike's assistant for a short time in the mid 1980s, which gave me invaluable experience. I still see him regularly for a pie and a pint and am proud to call him my friend. I don't call him OMIK any more though.
Posted by Lew Stringer at 13:57

This Troughton doctor with distinctive long hair on his neck sure is a disturbing sight ! :D Checkered trousers, too

Yes, it was strange. They got his trousers right though.

You're right, my apologies. Don't know why but I thought that those trousers belonged to Hartnell. Or maybe I had my mind focused on Pertwee because of the haircut. Either ways I was wrong.

No need to apologise, Roberto. I think the trousers changed later, but they were checked in his early stories.

some of the 'Frantic Fun' were reprinted in the Giant Holiday Fun Comic Album that Mr. Higgs edited. I indexed that item for GCD, along with two of its companion volumes. It is nice to see these in their historical context.

Ah yes, you're right of course, John. I'll correct that later. Thanks.