A classic ROY OF THE ROVERS collection is coming this summer! 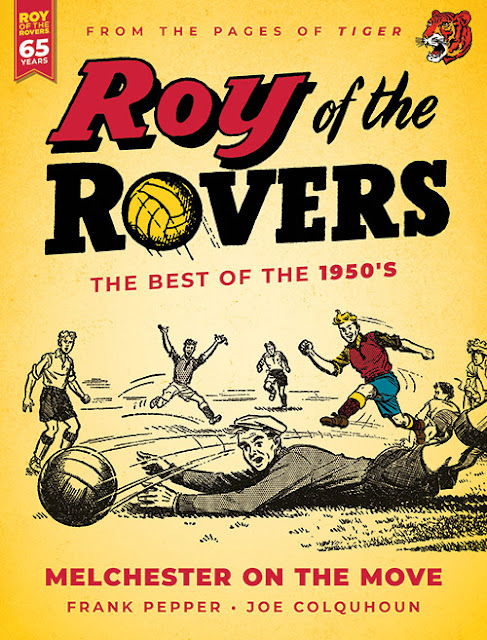 Just time for a very quick post today... the latest Previews catalogue has revealed that Rebellion will be collecting the earliest Roy of the Rovers strips in a hardback volume coming in July.

Written by Frank Pepper and drawn by Joe Colquhoun, Roy of the Rovers: Best of the 1950s will be a hardback reprinting strips from Tiger. A very welcome addition to their Treasury of British Comics range!

More details will emerge in the weeks to come, but for now here's a cover preview and the basic info. Pre-order it from your local comic shop with the Item Code MAY193304.

The legend begins here! Celebrating 65 years of goals and glory, this first in a spectacular new luxury treasury series collects the very best stories from the first decade of Roy of the Rovers comics. An icon of British comics and sporting history is born, with his origin presented in glorious hardback for the first time! Remastered for a new generation in the over-sized Treasury of British Comics format.

This is great news! I looked into the "Relaunch" edition recently and my heart sank deeper than a Darlington County volley into the back of the onion bag.

Why oh why destroy what made the original culturally significant and relevant, by embracing everything culturally irrelevant today??

I beg to differ I'm afraid. I think the rebooted Roy of the Rovers is fantastic! It's dynamic, fast paced, and intriguing. Can't wait for book 3.

Change was necessary. Roy always aged so he'd be nearly 90 now.... and that's even if you ignored that he'd lost a foot in the 1990s. The new version is perfect for today's generation to jump on board, - and this 60 year old enjoys it too!

Jeremy I totally agree with your comments. I am delighted that Rebellion are reprinting the old ROR strips which I loved si much. My particular favourite period is the late 60s area Having said that I know that Rebellion have to evolve ROR for a new audience and not old codgers like me so I wish them every success
I guess what I don’t like in a lot of the new art is the minimalist look and the angular features.
Thanks Lew for bringing this to my attention, I enjoy your blog I often say to my friend if I became a millionaire I would pay you shed loads to publish books on British comics.

In that case keep playing the lottery! :)

How many goalkeepers wore a flat cap to play??

He might have saved it if he hadn't been adjusting his cap.