Today's the day! The COR!! BUSTER HUMOUR SPECIAL is here!

It's the day that fans of British humour comics have been waiting for. The Cor!! Buster Humour Special will be on the shelves of WH Smith and selected newsagents and comic shops from today!

Many of the classic IPC characters are back, revived and rebooted for a new generation for the first time this century! The last time some of these characters were seen was in the final issue of Buster at the end of 1999 (apart from a reprint special in 2009)... and some characters had last appeared long before that! Now they're back, in a 52 page full-colour glossy special in all-new stories!

The comic kicks off with a fantastic three-page strip featuring Sweeny Toddler, and it's written and drawn by Tom Paterson, the artist who drew his adventures throughout most of his original run!

Then it's on to reboots of other favourites, including Deadly Hedley by Paul Goodenough and Neil Googe, with colouring by Jim Boswell... 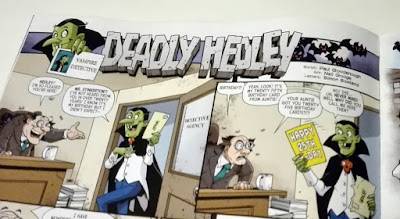 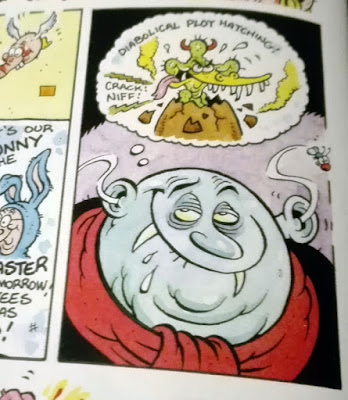 ...plus Frankie Stein! X-Ray Specs! Gums! Kid Kong! Hire A Horror! and many more, including brand new characters Swines of Anarchy by The Feek and Pye Parr... 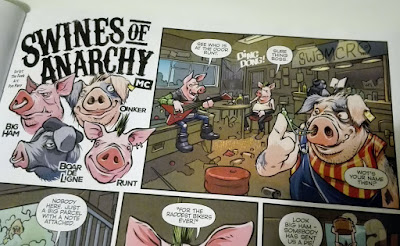 ...and a gathering of classic characters in Who's In Charge? by John Freeman and Lew Stringer... 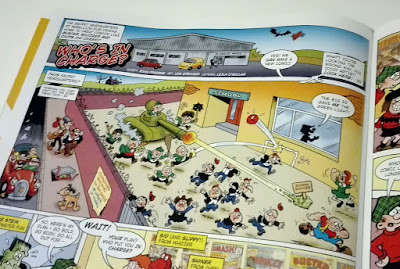 There's even some vintage art by Ken Reid to top things off, as well as a couple of puzzle pages and a breezy look back at where some of the characters first appeared.

Publishers Rebellion and editor Keith Richardson are to be congratulated for bringing these favourites back for a whole new generation. No doubt some older readers will miss the old art styles but sadly most of the original artists are no longer around. It's also important that the comic doesn't look like a clone of The Beano or The Phoenix but has its own identity. From Comic Cuts to Oink!, humour comics have always evolved to reflect the times and changing styles so it's only natural for today's artists and writers to be given an opportunity to work on this new special. After 19 years or more in limbo, these characters will be regarded as totally new by today's young readers, and that's who this comic is aimed at, so a fresh revamp is the way to go.

That said, there are various nods to the past as a tribute to the heritage of the old comics. Even Weary Willie and Tired Tim and Homeless Hector have a cameo!

Having been one of the artists/writers on the original Buster from the late 1980s and through the 1990s it's a good feeling to be back for this one-off revival. I hope it receives the support and appreciation it deserves so that hopefully it won't be the last we see of Buster and his pals!

The Cor!! Buster Humour Special is out now from WH Smiths, newsagents, and comic shops. 52 pages for £4.99.

A couple of photos of it on display in WH Smiths in the Midlands... 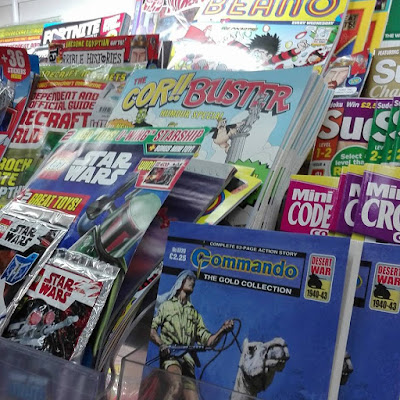 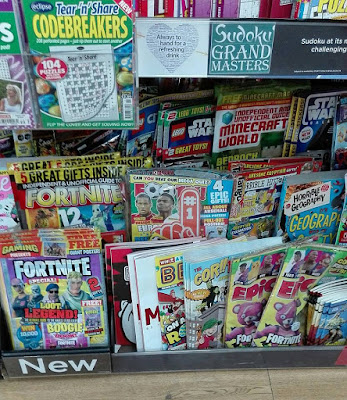 I know it's unlikely, but I really hope this (and then probably more specials) sells well enough to grow into a new humour weekly!

Unlikely but not impossible. The Beano and the Phoenix do well as weeklies, and Panini UK are talking about doing a weekly Marvel comic so here's hoping!

I enjoyed the nods to the past in Deadly Headly... also liked X ray specs...Kid Kong..gums..deadly Hedley..hit kid..liked the ending on Swines...didn't like the pork pie bit!..disappearing trik was epic...Captain Crucial and fusspot..and of course your work and Tom P..oh and Hire a horror was good too..lets hope it inspires DC Thomson to use there old characters..also of course hoping for more specials...maybe more than once a year..Christmas special would be great...and of course weekly!

My personal hope is they'll do a Smash! special featuring a mix of humour and adventure strips, like it was in the 1960s... but that's just my nostalgic preference. It would make more sense perhaps to stick with Buster as a title due to its longevity.

Talking of new comics, have you been following Pat Mills' one off "Space Warp" project? For those of us intested in how comics are put together and promoted, his articles offers behind the scenes access- well worth a look. https://www.millsverse.com/spacewarp/

As to the Cor special, I looked for it at Sainsburys today, disappointed that it wasn't around but I'll search at WH Smiths.

Supermarkets aren't stocking it. As noted above, it's available from WH Smith, comic shops, and selected newsagents.

Haven't heard much about Space Warp. Will check it out.

Looking forward to picking this up. Can't wait to see new Grimly Fiendish strip after sooooo many years. It all looks very cool to me, I hope that young kids get this bought for them and enjoy it. Interesting to read Pannini are looking at the possibility of a weekly comic.

Got this today looks brilliant and can't wait to read it through properly but flicking through brought back loads of memories. My only gripe is not with the publication but with WHSmiths. In Meadowhall this was placed on the top shelf next to Viz. If this is reaching out to a new younger audience surely it needs to be on the shelves with Beano, Phoenix and other kids comics. Hope this sells well and leads to more specials!!!

I understand that Smiths have been told to put it with the children's comics but it depends if staff in various branches are paying attention. I'll pass on your comment to the publisher.

I really enjoyed the comic! Good job on 'Who's In Charge?' and the history segment Lew!

It was also on the top shelf of my WHSmiths but so was many other children's comics for some reason! So I had the same thought, that my children just won't see it, but at least it's actually with the kids' stuff.

Some Smiths branches put comics out of the reach of kids, expecting only parents to buy them. Yet they're sometimes so high up even parents under 5' can't reach them! (I was once asked to reach for a comic by a customer who couldn't reach it.) It's a silly policy in my opinion. Smiths should make items accessible for everyone. After all, the idea is to sell the product to benefit the publisher AND the retailer!

Enjoyed it greatly. More importantly, so did my daughter.

Couple of niggles here and there (not fond of the Kid Kong redesign, for example. But, hey, at least he wasn't pinkish-purple and the story was top notch).

Overall, it was really well done. Enough there to honour the originals and appease most of us old farts, with a modern take on things to interest the youngsters.

Let's hope it sells loads, 'cos I want them to produce more.

Just found this and ordered it, I hope it does really well, Love to see more like this, Inc the other main comics Whizzer and Chips, Whoopee, Wow, Jackpot, Krazy, Monster Fun, Shiver and Shake, so on, takes me back to my childhood x

Characters from all those comics appear in this special so hopefully you'll enjoy that. 'Cor!! Buster' is just a title they went with because it has impact and Buster was the longest lasting.