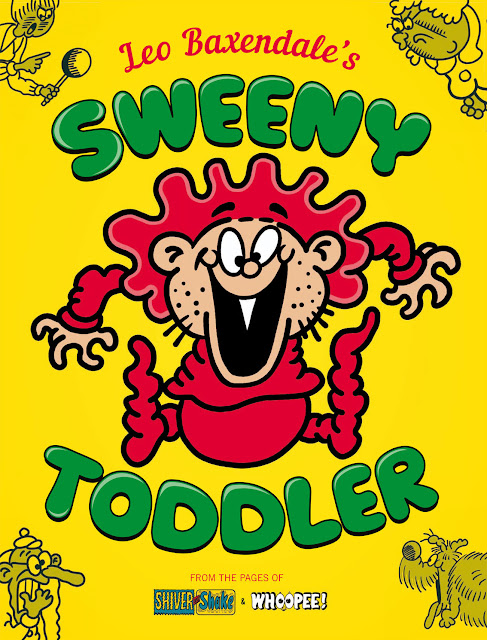 Thanks to Rebellion for giving me access to an advance preview copy of Leo Baxendale's Sweeny Toddler, a book sure to be snapped up by many when it hits the stands this July!

This great addition to The Treasury of British Comics reprints all of Leo's Sweeny Toddler strips from Shiver and Shake and Whoopee! weeklies from 1974/75 (plus six pages by unidentified "ghost" artists).

Sweeny Toddler was one of the last characters that Leo created before he quit mainstream comics in 1975 to pursue self-published projects and he certainly left us laughing. This is an hilarious collection that deserves a place on every comic fan's bookshelf. It's suitable for all ages too, so if you have young kids, this is an ideal treat!

Here's the PR from Rebellion and the first two strips... 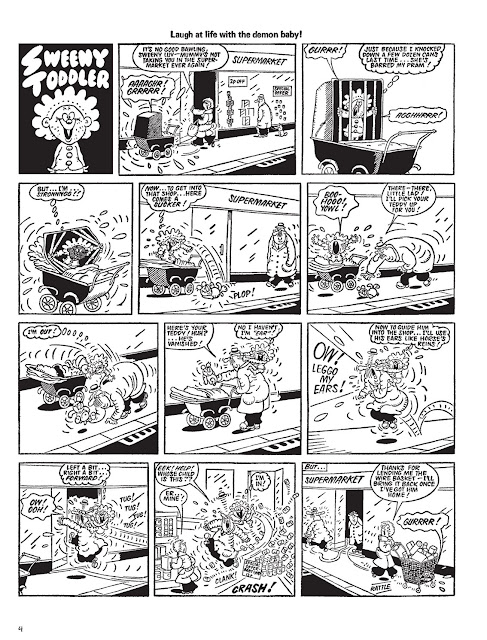 Sweeny Toddler was Leo Baxendale’s greatest creation for IPC – a two-year-old terror who manages to cause mayhem from beyond his pram and cot! This collection bring together all of Baxendale’s Sweeny Toddler strips from Shiver and Shake and Whoopee, with an introduction from Martin Baxendale. One of the most highly-regarded cartoonists in British comics, Baxendale has been responsible for creating many beloved classic strips, including Minnie the Minx and The Bash Street Kids. 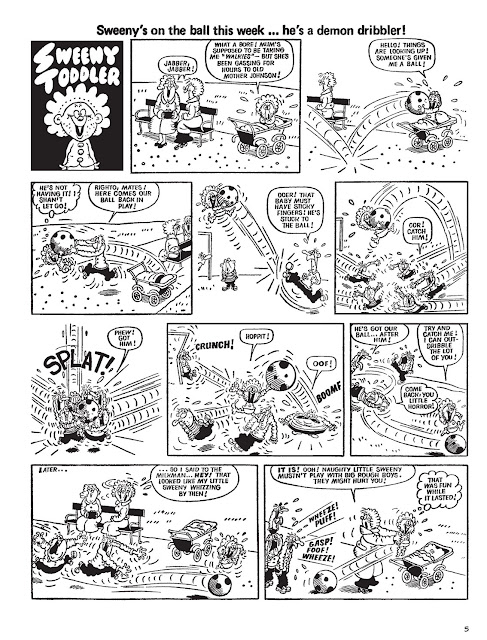 Available in digital from: Treasury of British Comics webshop & apps for iPad, Android and Windows 10

The completist in me needs to know if it includes his Star Guest strip from Cor!!. If memory serves, that was Tom Paterson's first Sweeny.

If it's by Tom Paterson though perhaps it can go into vol.2 which would feature his work.

I once published an article on the Shiver and Shake run of Sweeny on my blog, and included an image of that very first episode by Tom Paterson which I discovered in COR!!. Here's the link: http://kazoop.blogspot.com/2013/05/a-look-at-shiver-shake-strips-sweeny.html
Completists may wish to know that there was one more episode by Leo Baxendale that was part of the Pick-A-Strip competition in Whoopee! after it absorbed Shiver and Shake. Eight strips competed for a regular slot in the new combined comic, and readers voted for Sweeny. I wonder if that episode is included in the Rebellion collection? I blogged about it here: http://kazoop.blogspot.com/2016/03/sweenys-winner.html
I will definitely buy the collection when it is released later in the year!

Hi Irmantas, Yes, the 'Pick a Strip' page is in the book on page 79, minus its Pick a Strip banner.

I'd forgotten about the Cor!! Star Guest strip, as had the editors, so unfortunately that's not in the book. However, not a vital loss as it's not one of Leo's. Hopefully it'll be collected in book two if they do a collection of Tom's strips. (Which I hope they will!)

By 1972 I had almost totally stopped buying UK originated comics (only picking up the odd one here and there) but I am really looking forward to this one as most of the strips will be new to me, and its by Leo so its bound to be top drawer stuff. I love the cover as well.

I also really enjoyed Tom Paterson's recent "Sweeney" strips in the "Best of Cor and Buster " title (actually I loved almost all of that comic).

Good to hear it, Paul. It's actually called The Cor!! Buster Humour Special though and is all-new (apart from a small amount of excellent Ken Reid reprint).

Apologies on the title mix up I have never been great with these lol. I loved the Ken Reid reprint art - lets hope the Humour special leads to a regular or semi regular new content title.