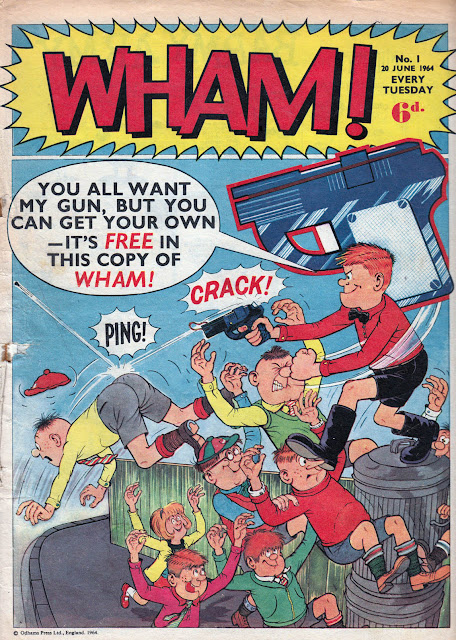 Fifty-five years ago this weekend, on Monday 15th June 1964, Wham! comic made its debut in newsagents across the UK... or at least that was the intention. In Leo Baxenale's autobiography A Very Funny Business, he tells of how he and editor Alf Wallace checked out half a dozen London newsagents on the day of its launch only to find that some had never heard of it and others had sold the few they had and couldn't be bothered to re-order. Seems that little has changed in half a century, with today's readers still having difficulty finding comics in newsagents!

Nevertheless, Wham! was warmly welcomed by kids who did discover it, and although it never reached the heights of sales the publisher hoped for, it lasted for three and a half years, - far longer than many comics! The topline of Wham! sometimes billed it as "The funniest comic in the world", and for many of us it certainly was! Lively, reckless, packed with over the top comic-violence and topical references, Wham! spoke to a Sixties generation that perhaps found other comics somewhat old fashioned by 1964... and now that we're in our 60's we still find it funny!

Here's how Wham! was advertised in other publications of the time. Firstly this tiny corner box appeared in Boys' World Vol.2 No.23 (dated week ending 6th June 1964) as a teaser... 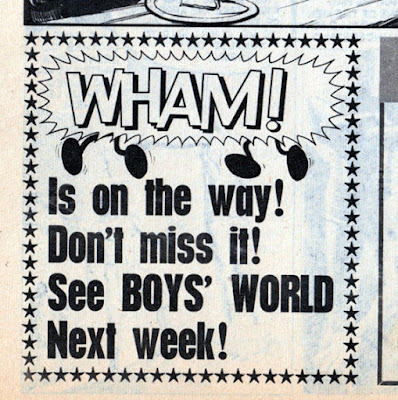 The following week, this advert appeared in both Eagle and Boys' World, heralding the arrival of the comic... 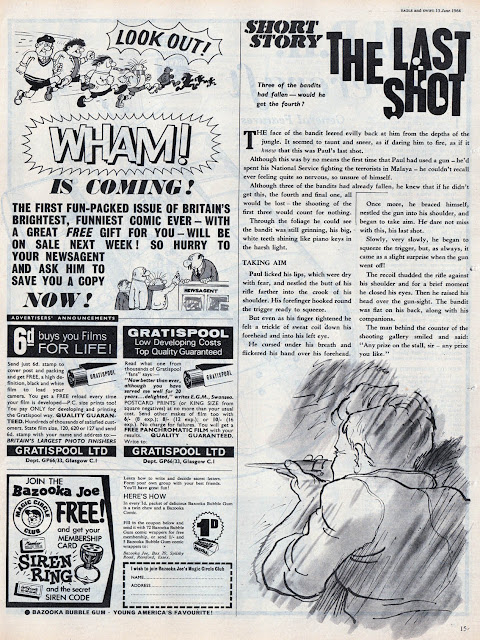 These two ads are from the same issue of Today magazine, June 1964. The Leo Baxendale cartoon in the smaller promo was exclusive to the magazine... 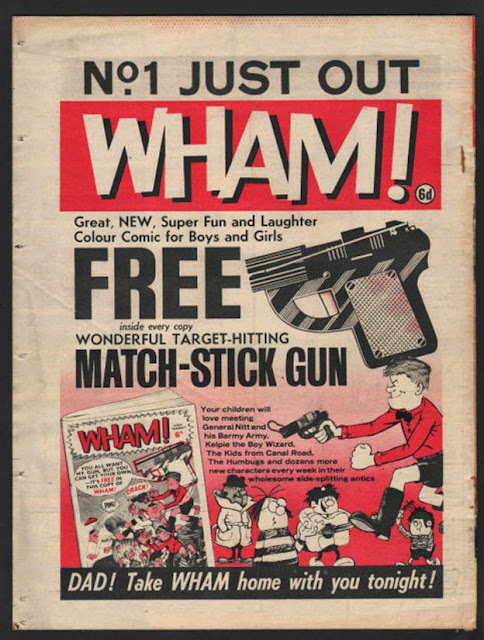 Here's a bigger scan of it. The first appearance of Biff, who went on to be Wham's regular cover star for the first year or so... 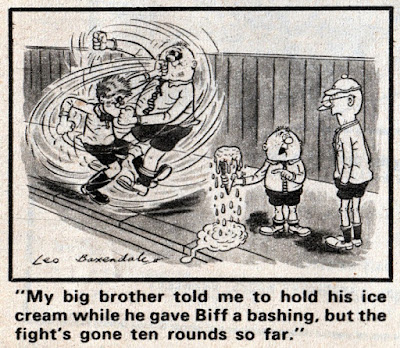 ...and this full colour ad appeared in Boys' World two days before Wham! arrived in the shops... 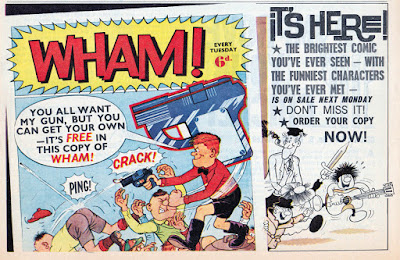 It's worth bearing in mind that back in 1964 there were no 'Power Comics'. The imprint only started appearing in late 1966 on the covers of Wham! and Smash! when plans to establish the line were in place with the arrivals of Pow!, Fantastic, and Terrific in 1967. At the time of Wham's launch in 1964, Boys' World was considered to be its companion comic. (Indeed, both comics featured the Billy Binns character, albeit in different adventures.) Sadly, Boys' World merged into Eagle in late 1964 so it never became part of the 'Power Comics' group, but it's worthy as consideration as an early cousin of the Power Comics due to it using some of the same artists such as Brian Lewis, Luis Bermejo, Artie Jackson, and others (and even Leo Baxendale's first work for Odhams appeared in Boys' World) and having the same editor in Bob (Bart) Bartholomew.

A few years ago I did a blog piece on that first issue of Wham! so I thought I'd re-present it here today in celebration of the comic's 55th anniversary...

You probably know how Wham! came about, but if not, here's a recap: in 1964, Odhams Press wanted to produce a rival comic D.C. Thomson's Beano. The editors convinced Leo Baxendale to quit The Beano to develop stories for their new comic, which Leo envisioned as a sort of "Super-Beano" (or Wham! as Leo eventually called it) poaching Thomson's top talent. However, most of Thomson's artists would not leave the security of long-established comics to work on the new rival publication.

Although the end result wasn't quite the "Super-Beano" that Leo had hoped for, Wham! still turned out to be a fresh and funny addition to the growing number of weekly comics in the Sixties.

Incredibly, in the first issue of Wham!, Leo Baxendale drew 17 of its 24 pages himself. Four of which were in full colour. Naturally, no one could keep up that tremendous output every week, so following issues saw other artists join the comic to imitate Leo's style on many of the strips. Meanwhile, over at The Beano, other artists were also imitating Leo's style on the strips he'd left (such as Minnie the Minx and The Bash Street Kids). As the 1960s moved on, Leo became the most imitated humour artist in the business, and elements of his popular style are still evident in comics today.

Back to that first issue of Wham!, published Monday 15th June 1964, and here are a selection of pages, all created by Leo, except for Georgie's Germs which he thinks was an idea by Alf Wallace or Albert Cosser. All of these shown here were written and drawn by Leo though... 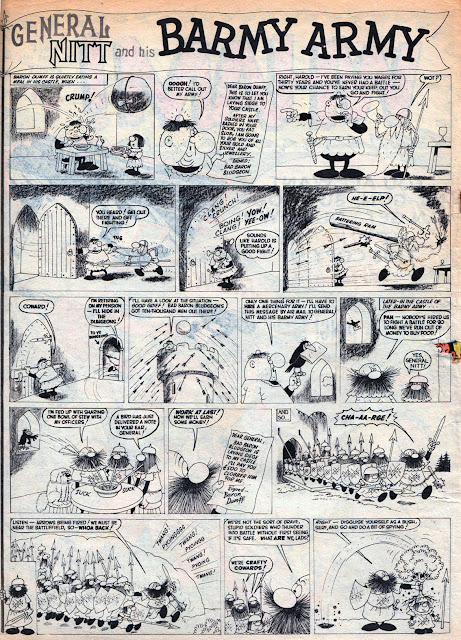 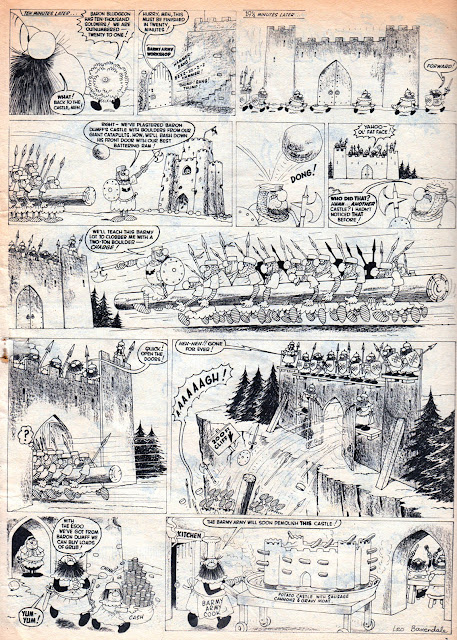 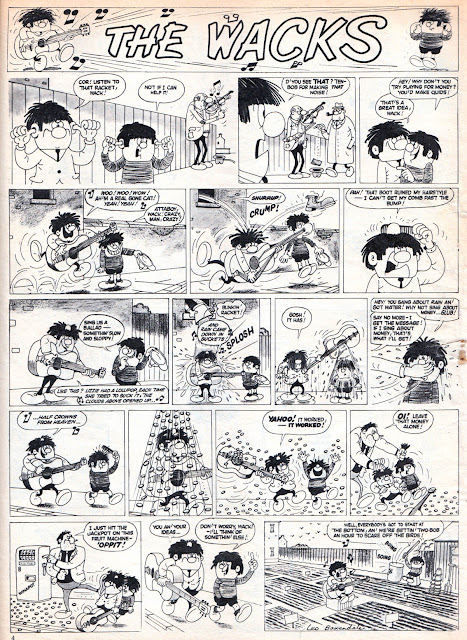 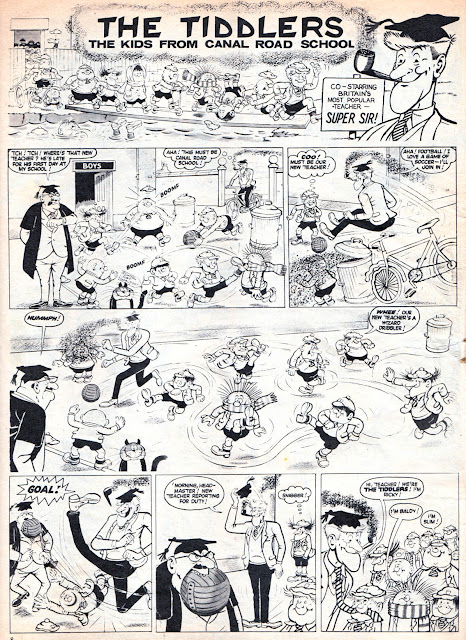 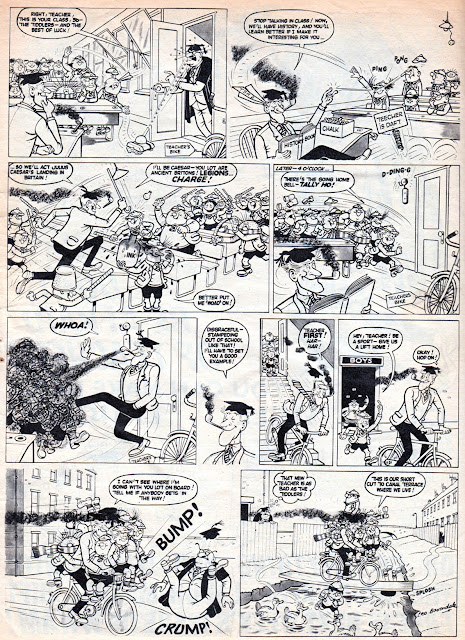 The centre pages gave us the first episode of Eagle-Eye, Junior Spy, a spoof of the popular spy genre of the time. The most important part of the strip though was its introduction of the baddie, Grimly Feendish, who would eclipse Eagle-Eye in popularity and go on to have his own long-running strip in Smash! (as well as a song about him years later by The Damned). 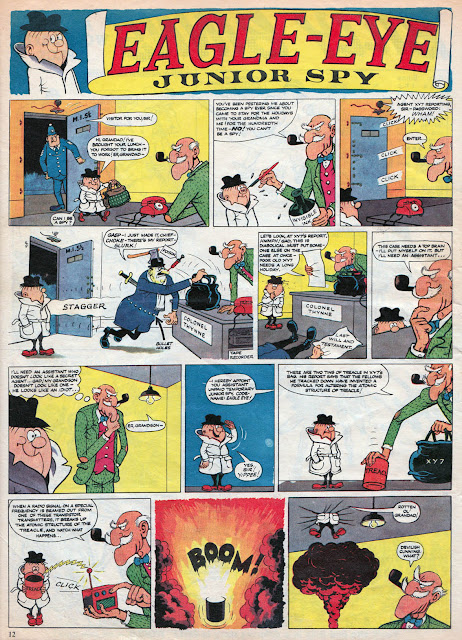 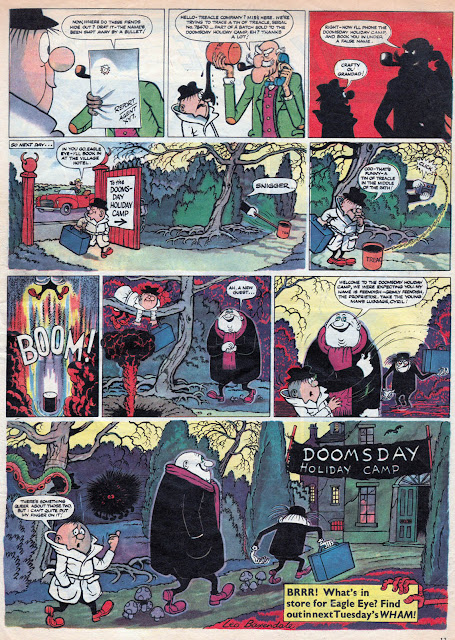 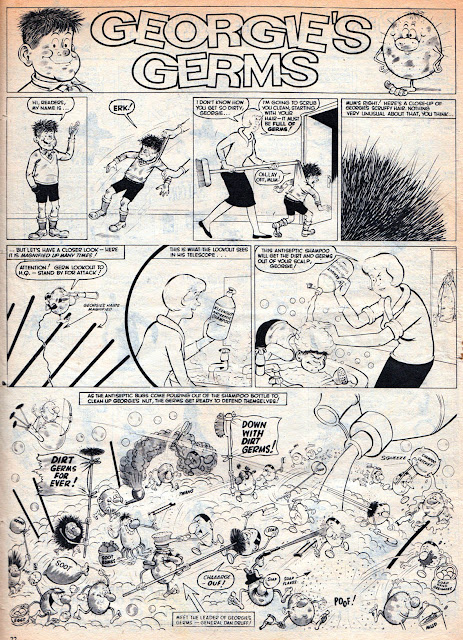 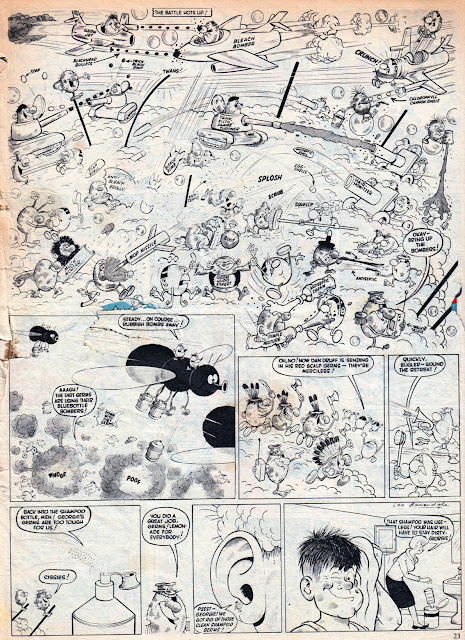 With issue 4, Ken Reid joined the comic, bringing us Frankie Stein, and Wham! became more manic than ever. It may not have been the "Super-Beano" that Leo had hoped for, but Wham! still turned out to be a great comic, with a cheeky, anarchic attitude, and still very fondly remembered by many.

Sadly it declined over time, with cuts to the budget necessitating a reduction in colour pages, then a drop from glossy to newsprint, and eventually reprints of the Fantastic Four to be added (although many of us enjoyed that!). When Leo Baxendale left Odhams in 1966 the quality of the strips by some of his imitators was often noticeably poorer. Nevertheless, Wham! inspired Odhams to launch companion comics for it, and soon we had Smash!, Pow!, Fantastic and Terrific, collectively known as the "Power Comics" that helped make the Sixties a great time to be a child! 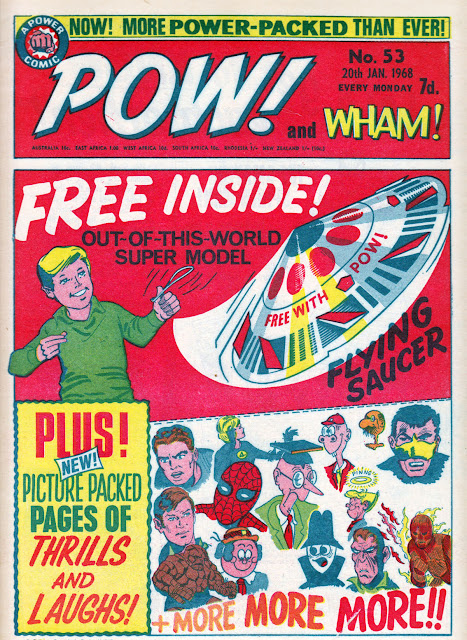 You can read about the first issues of the other 'Power Comics' here:

Now that Rebellion own the rights to these comics it's hoped that we'll see some collections of these strips at some point. There are already two volumes of Ken Reid's Odhams material of course, published by Irmantas Povilaika under licence, and they're worth every penny:
https://www.kazoop-comics-shop.com/The_Power_Pack_of_Ken_Reid_Vol_1_and_Vol_2/p5698590_18914104.aspx

I wonder if Rebellion would consider reprinting the whole run of a comic in a series of books, each volume containing, say, 10 full issues?

Anything's possible I guess, Kevin. I'm not sure if that would prove popular with the majority though. It works for American comics because you're getting 10 full length stories, but a British compilation would be just 10 short chapters of each serial and no resolutions in the book. Most readers I've spoken to are just interested in the story, not the history or context of a comic unfortunately.

What I would like to see are facsimile reprints of first issues / key issues, but again, they'd only appeal to hardcore collectors and I don't think there are that many around for British comics. And some of those only seem interested in spending 50p on a tatty back issue at a car boot sale and would baulk at paying £4.99 or more for a facsimile. I'd be happy to be proved wrong though!

Always loved Wham, gotta be one of my favourite comics even if I only own a few issues (including #4 with the first Frankie Stein!). Thanks for sharing Lew.

Great post Lew. Wham definitely was a very different comic when first published. Whenever comedian Dara O'Brien (sic?) is on the telly show Have I Got News For You, I always have a little chuckle and picture Grimley Fiendish asking the questions.