The STEEL COMMANDO returns this August! 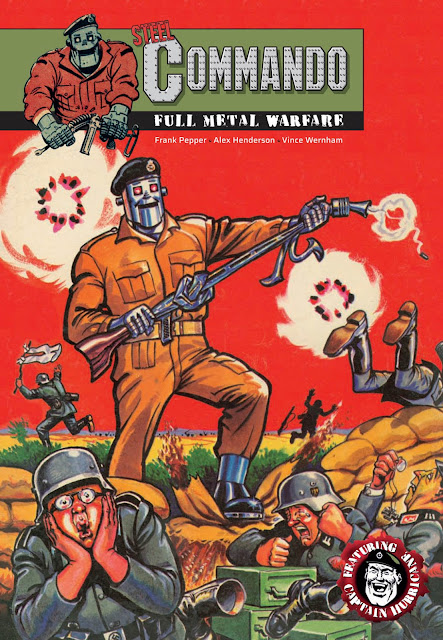 Another in the great range of classic reprints from The Treasury of British Comics, Steel Commando is published on 22nd August. This one is a little different though, as it'll be in a smaller, digest format (which also means it'll be cheaper than the other books). An interesting development. Could that format also work for some humour collections? Time will tell.

A "Best of" collection, it reprints a wide selection of Steel Commando strips from Thunder, Lion, Valiant, and annuals and specials.

The creative team includes Frank Pepper on scripts, with Alex Henderson as the main series artist, with Vince Wernham and Jack Pamby on some episodes, Charles Roylance on the Captain Hurricane chapters and a cover by Geoff Campion.

A new collection of a forgotten 20th Century classic, presented in the popular digest format. With superhuman strength, bulletproof casing and an unstoppable resolve, the Steel Commando is the Allies’ ultimate weapon in the war against the Axis powers. There’s just one bug in his circuits - he’ll only take orders from Ernie Bates, the laziest soldier in the British Army! Watch ‘Ironsides’ and ‘Excused Boots’ Bates carry out thrill-filled missions in dangerous enemy territories! This fun-packed army adventure also includes an early comic strip crossover as the Steel Commando joins forces with the mighty Captain Hurricane!
Available in print from: book stores, Amazon, and UK comic book stores via Diamond.

Seems a strange choice in character but I'm a big fan of the digest size and think these could be great for fans at least. Being a tad cynical here but this looks a bit like a DCT Commando comic at first glance.

That's the idea, Paul. It's a spoof/homage (take your pick) of the Commando cover design.

Can't that kinda be given to any old British character? the term classic is used soo much not to denote quality but age (as in Classic Books (more then Classical books), Classic Cars etc). 20th Century is kinda.. well.. any one from between 1900 and 1999, and forgotten?... I've heard and know of the Steel Commando, Forgotten refers to one that people know, but then don't know now.. so they forgot.. so only refers to people that read his adventures as a kid but have no interest and real memory of comics they once read...

sorry ^_^ it's just I guess i'm really feeling "Against mindless marketing buzz terms" at the moment.. like wanting to inflict harm onto anyplace that uses the terms "Bespoked" (meaning custom made) and "Downsizing" (Meaning reduction of content)…. can you imagine "Hey kids, Next week we are Downsizing our comic but don't worry, it's now a bespoked comic as we are bringing back the forgotten classic "This comics belongs to" box! yay!"... oh dear.. I hope I haven't started anything...

Still, as much as I kinda dislike 'digest sized books' when they aren't designed for it (okay, a lot of Japanese comics ARE designed for it. They feature large panels, carefully inked lines which often show minimalize details which can help bring out more details in that, while giving a softer feel, and few panels per page. when trying to print a comic NOT designed for such a size, you get hard to see detail, hard to read lettering which often gets RE-lettered in order to make it more readable (and in cases like the DVD reprint of "StarFleets" look-in comic series, misses out the odd bits). It's not the best way to show off stuff. THOUGH as someone with a major space issue, I understand how they are much better for storage. This is also why I keep moaning to people about books not having size standards in the way that DVD/VHS/Cds/etc do.

Just to mention that the pages in Steel Commando are complete and haven't been re-lettered.

I wouldn't quite mistake this for a regular "Commando" issue, but logically, it will sell to some of the same audience, from the same shelf. I hope it doesn't cause trouble, though.

There'll be some crossover of readership but I think they'll appreciate the homage.

Good they haven't been edited ^_^ yeah, I admit I'm kinda arm.. pedantic but as they say, if you don't poke fun at the stupidest of the world and point out the mistakes of others, society is doomed. well.. some say something like that.. Anyway, it's good that' they have left it.

Yet to see this in WH Smiths

It's a book. You're not going to see it with the comics. Try Waterstones or Amazon.

Thanks for this - just checked it out on Amazon. Two negative reviews RE: the size and formatting and thus readability.

One ends with 'In summary reading this is not a comfortable experience for the potential readership who are likely around 50 years or older'(!)

I think people complain too much. It's still legible at the reduced size. I'm 60.