IT WAS 40 YEARS AGO TODAY, 1st Sept 1979... myself, Nigel Lawrance, Doctor Baz Samways and the late Dave Bird travelled to the Metropole Hotel at the NEC, Birmingham, for Comicon 1979! The very first comics con I attended! The star guest from the USA was Jim Steranko, one of the most creative, and coolest, guys in comics, and the first comics pro I ever met. (He signed my copy of The Illustrated Harlan Ellison which he'd drawn a chapter of).

Although my ambitions to work in comics were stirring, I had no idea if I'd achieve it. Steranko told me to stick at it, so I did. I've lost count of the cons I've attended since (initially as a fan, then invited as a guest since 1984) but that first one still has a special place in my memories. Seems so long ago now, as indeed it was.

Thanks to Richard Burton for the use of his photo of Steranko and Mike Conroy at the Eagle Awards. The following two images are scans of the ads for the convention. £3.50 for a two day ticket! Daft as it sounds that was a lot in 1979, but for the career it led to... and all the friends I've met through such events... worth every penny a million times over. 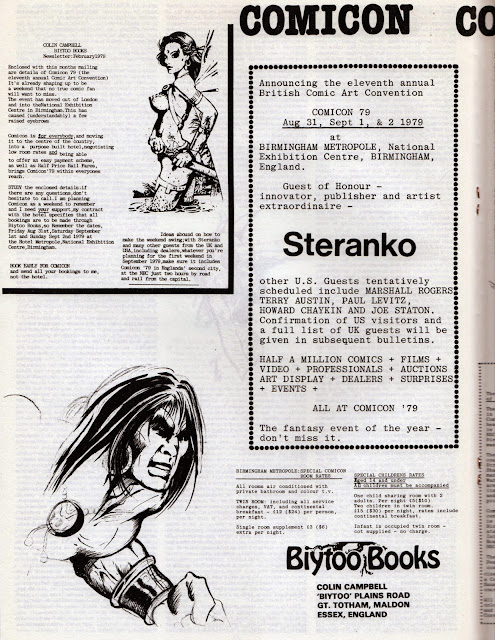 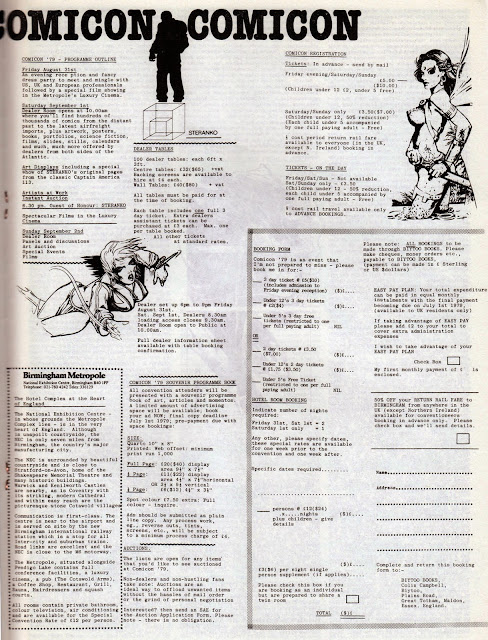 When I returned home I set to work writing a review of the event for my fanzine After Image. Here's the result. I cringe at the stories of boozy parties now but I was a naive 20 year old at the time. You'll note that in those days there was an all-night cinema show so that fans who couldn't afford rooms could sleep in the cinema! (Or try to get to sleep anyway. Practically impossible as you'll see from the article.)

Note the fan art by Adrian Salmon at the end of the piece. Another artist who did well and moved into professional work a few years later.

I didn't own a camera back then but the memories have stayed fresh in my mind. Great, carefree times!

No, too late for that as Starlord came out in 1978. I think it was either shelved at the last minute or it might have been a working title for Speed.

This was my first convention too. I was 14 and spent all summer washing cars and creosoting fences to raise money to go. I had 90 quid on me when I went. The first time I entered the dealers room was out of this world. I spent every penny and came home with over 200 American Marvels I'd never seen before. It was heaven. And the following year I was down at the Marvel Comics Film and Fantasy Convention in London which was 40 years ago yesterday!

The only things I remember buying from the 1979 con were the aforementioned Illustrated Harlan Ellison book and a Moon Mullins book. I'm sure I must have bought a bagfull of comics too but they'd be long since sold now. (My cut off point for saving American comics is around 1975. Anything after then is unlikely to be read twice so I get rid of them after a few years. Notable exceptions being things like Watchmen and V for Vendetta which I've bought in book form just before I sold the original comics.)