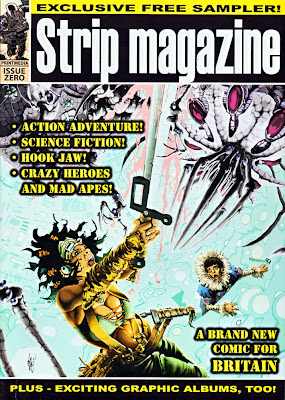 Not long to go now before October's launch of Strip Magazine No.1, the brand new British adventure comic from Print Media Productions. If you want a taster (and in these comic-starved times who wouldn't?) you can read an online copy of issue zero for free at the Strip Magazine website here:

The preview is just 16 pages but the actual issue one will feature a mammoth 68 pages in full colour for £2.99. Editor John Freeman has just announced that for the first few months Strip Magazine will only be available through direct sale outlets (UK comic shops, not newsagents). "We still plan to widen our sales to the UK high street in 2012," says John, "effectively 're-launching' the title after its initial tranche of content draws to a close". 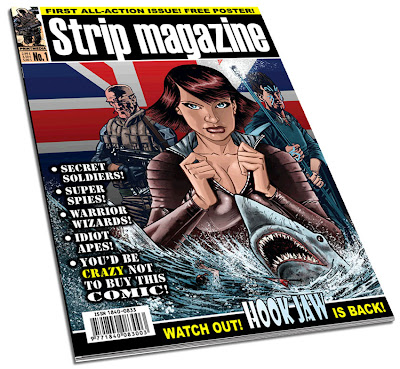 Readers who were looking forward to buying the comic from their corner shop this year may be a little disappointed with this news but if you ask your nearest comic specialist shop (such as Nostalgia & Comics, Forbidden Planet, Gosh! etc) to order you a copy now you won't miss out when Strip Magazine launches in October. Please don't wait and think "Oh I'll buy it next year when my newsagent has it". The comic needs your initial support for it to grow. 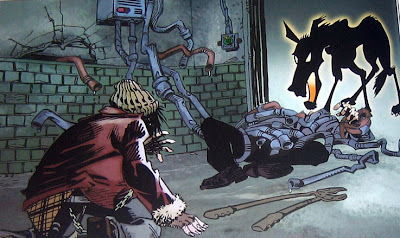 "We see this as an opportunity to 'test bed' the title, in a similar way to partwork publishers who roll out test magazines in a key region to see if the project appeals" says John Freeman.

Make no mistake about it, launching a new British comic today is a brave move and not an easy path to take. There is resistance and apathy from the UK retail trade to any comic that isn't tied into some merchandised fad, and even if the comic is accepted there are huge fees to pay just to get it on the shelves, and no guarantee that the shops will actually display it correctly (or even the right way up). 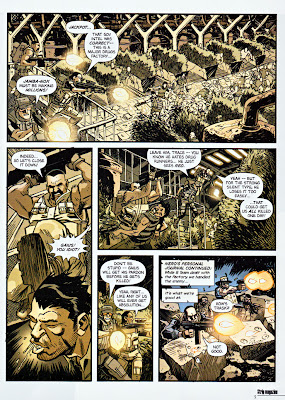 Some people may use their blogs and forums to berate UK publishers for not putting out more non-licensed comics but talk is cheap. Sure, small press comics can thrive, and many of them feature excellent work on a par with mainstream comics, but to make a comic profitable in this day and age, to earn its creators a living, isn't easy. Shame on the hecklers who think it is. 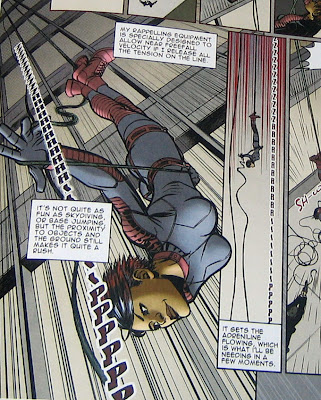 Strip Magazine is exactly the kind of comic that fans of British adventure strips have been asking for, so I hope each and every one of them supports it. The strips feature top notch talent (John McCrea, PJ Holden, Ferg Handley, Kev Hopgood, and John Ridgway to name but a few), solidly told tales that aren't "mature readers" sex/gorefests, and a variety of stories. Think Lion or Valiant but with a modern twist. 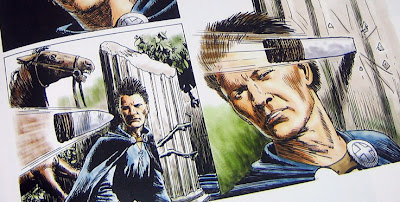 For more details on the comic and to keep up with developments bookmark the Strip Magazine website:
http://stripcomicmagazineuk.blogspot.com/

A new hardcover graphic novel Mirabilis is out now from Print Media and I'll be reviewing it here shortly. (Short review for now: It's fantastic. Buy it!)

This is the first "traditional" style UK comic I have looked forward to reading in a while so good to see it's still on track. Following the recent disastrous ABC sales figures for UK comics I think it's a canny move to sell the first few months/year via direct sales outlets first. McScotty

Damn it, such a huge mistake not distributing through newsagents. I can't see it selling enough through lcs alone. It needs to be in view at cornershops and WH Smiths to get the younger market. As it is they'll just get a few older nostalgic comic readers.

2000ad seems almost to be a dirty word in my lcs so I can't see them pushing this.

I really hope they reconsider this because I really want it to do well.

I'm sure if distribution was available they'd get it into Smiths right now, but cracking newsagents is a big hurdle.

True, some comic shops (and fans) still have a resistance to British comics for some reason but apparently Clint does better in comic stores than newsagents so you never know. Better to have a trial run in lcs than wait until newsagents take it next year surely?

I've said it before, but I hate the 'big titted girl with big ass weapon' covers. It's almost a reason to leave it on the shelf. Especially if it honestly reflected the magazine's contents...

Still, I *really* hope it succeeds. I guess nowadays, what a comic needs is a big PR spend, newsagent distribution and a tie in TV show...basically a 'bottomless pockets' approach. I'm really intrigued to find out if a smaller campaign can succeed...I wish 'em good luck...

It needs to be in newsagents next to Beano Max and the Complete Spider-Man.

Called something else, especially with that sexy girl looking like she's about to reveal her assets.

It will be in newsagents next year. At the moment, comic shops are the option. Better than nothing, surely?

I also have the fear that newsagents would only see "Strip" and big boobs and top-shelf it immediately, BUT that's only judging it by one cover, and it's not even the one that'll appear in newsagents. John Freeman is an experienced editor and I'm sure that by the time newsagent distribution is used there'll be good action-adventure covers to attract kids.

It's a difficult task to gauge how to appeal to today's kids. This is an all-ages title but at the same time it can't look like a 1970s comic. It needs to find its own way, and its own audience, - assuming enough British kids and young adults aren't too apathetic to read.

Great to get feedback on STRIP Magazine. Some points

1) There's good reason for the title - it's an expansion of Print Media's brand ('Strip Magazin' is already on sale in Bosnia and Croatia, which is of no interest here, but to the publisher it's an important element)

2) STRIP has been used as a comic anthology title in the UK before, ably edited by Dan Abnett at Marvel UK. Unfortunately his tremendous enthusiasm for the title was not matched by management support. There is no lack of 'management support' for STRIP Magazine

3) We fully intend to do a news stand launch in 2012. We're talking to a major news stand distributor about this. It will probably cost some £20,000 plus to get the title into newsagents: so as you can imagine we want to be sure it's done right rather than see that kind of spend wasted.

4) Thanks to everyone for feedback. It's all appreciated.