Here's a short selection of seaside-based strips from various British comics over the years. First up we have Lazy Larry from The Dandy No.325 (dated 17th August 1946). Two things about this strip spring immediately to mind. One is the old science-defying comic cliche that an air bed pumped up with air will somehow defy gravity. The other is that British comics often relied on justice and fair play, but here two little brats pick on a tramp who is minding his own business and there's no retribution in the payoff. That said, no real tramps were harmed in the making of this strip and the artwork by Dudley Watkins is ace.
A good example of the sort of justice seen in old comics is this Homeless Hector strip below from Illustrated Chips No.2,813 (July 5th 1947). Hector and Mog get their revenge on a greedy beach photographer by using his own props against him. Arthur Martin drew the Hector strips around this time but this doesn't look like one of his. 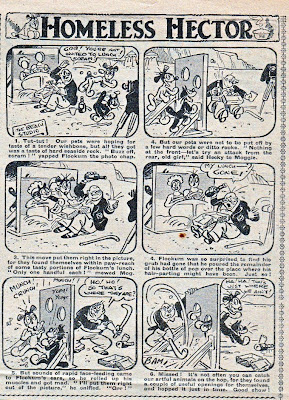 That same issue also featured Peter Quiz at the seaside. Another tale of justice, although the use of the 'n' word in a children's comic is shocking by today's standards. Art by Arthur Martin. 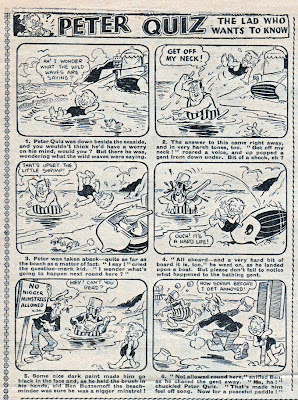 A month later, in The Beano No.316 (23rd August 1947), Pansy Potter uses her strength to gain the advantage in a sandcastle-building contest, but it backfires on her. Art by Basil Blackaller by this period I think.

With a few exceptions, today's pre-school "comics" are often nothing but basic activity magazines but back in the "golden age" of comics tabloid wonders such as Playbox offered cover to cover stories. (The point being, surely, that it's better to encourage children to read rather than just to colour in pictures.) This issue of Playbox (No.1,102, July 31st 1948) saw some of its characters visiting the seaside. The Jumbo strip was I believe by Freddie Crompton, whilst the lower strip featuring Tuffy and His Magic Tail was drawn by Arnold Warden. 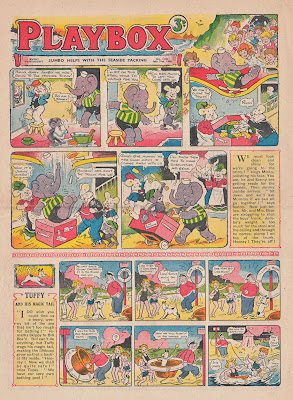 Moving forward to the sixties we have a Georgie's Germs story from Wham! No.116 (3rd September 1966). By this time the humour of comics has become a bit more gross. Perhaps ahead of its time as such comedy wouldn't really catch on for a few decades. I'm not sure who the artist is here, but it's definitely not by Leo Baxendale or Cyril Price who did some of them. 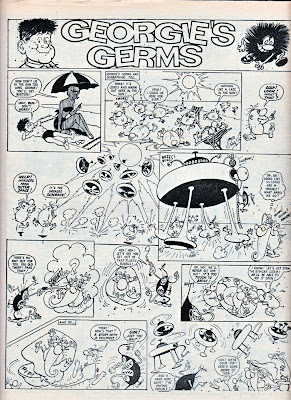 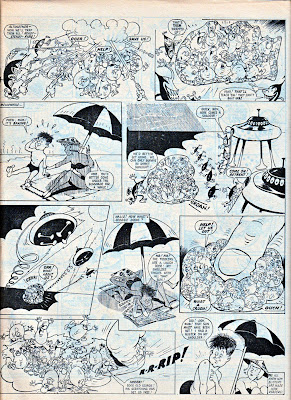 Here's an odd tale of Shiner in the Chips section of Whizzer and Chips dated 8th August 1970. Nice artwork by Mike Lacey and the strip would work if a black eye looked like a suntan and if the colourist hadn't mistakenly given Shiner an all-over tan in the last panel! 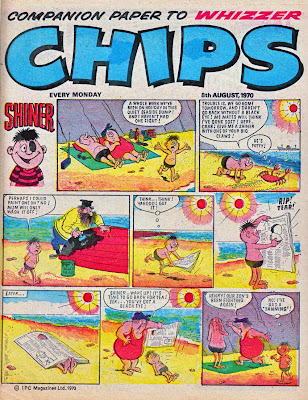 The humour in girls' comics seemed more gentle from the few I've seen. Here's a Bunty cover of issue 1226 (July 11th 1981) with the title character putting sand to good practical use. Art by Doris Kinnear. 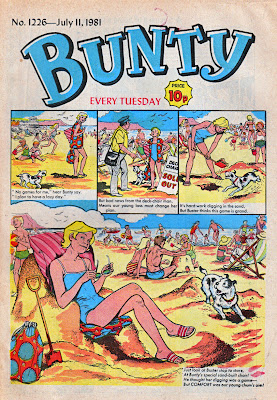 A few years later, May 27th 1989, and a Nikki cover by Paul Grist, better known today of course as the creator of the Jack Staff comic. 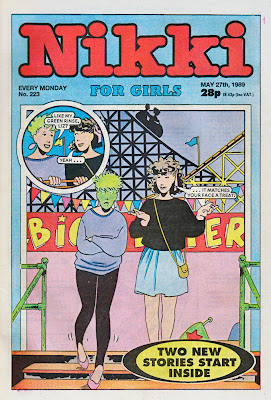 Nice seeing a new Dudley Watkins creation...pumping up the lilo and flying through the air has happened many times in comics as you say..

I agree comics for the very young really need to look back at the past and get more written stories...with pictures back...the activities take up far too much space and also very badly desgined and boring to look at...no imagination...and far to easy..
Parents should go on ebay and buy some nursery comics like Playhour..Buttons..Pippin..Jack and Jill to get some top quality comic...no dumbing down in these..
This should really be a topic in itself for a blog post..I'm very annoyed with what is on offer today for the very young..

Most of it is no doubt due to budget. Filling a mag with activity pages produced by the staff is cheaper than paying for originated stories. There are some pre-school mags with a few strips but nothing like say, Rainbow or Pippin.

It's a shame. Children's books today show great variety and fun but comics for the very young aren't really reflecting that. I know publishers are encouraged to feature "play and learn" pages for educational value but the skill of reading and comprehending stories in picture form should also be a bigger part of that than it is today.

Modern children's comics are no more than tv tie-ins. They're not even comics - just clip art and puzzles put together on a desk in a few days and they must turn a healthy profit given the ABC figures, the high cost, and the low, low production values. Although, I suspect a lot of the profit goes on paying the army of brand consultants, educational psychologists, marketing consultants, licensees and other hangovers-on who abound in children's publishing now.

As an aside - have you seen the credits in Dr Who Adventures? No less than 26 production staff (why are they credited? I mean, who cares who the 'covermount buyer' is?) and 8 contributors. No wonder it's such a missed opportunity.

Back to preschool comics - I also think they're very cynical - there really isn't much content in In The Night Garden comic or Waybuloo for the price, but I end up buying them occasionally to placate my wailing two year old. I'm in idiot. :-)

And I also wish reading and comprehension was a more integral part of these publications. Ah, well....