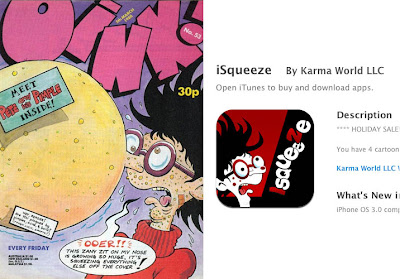 On the right, the title screen for the iSqueeze app for the iPhone, advertised on the Apple website and on sale through iTunes, 2011.

Perhaps they thought I wouldn't notice.

You'd think a company calling itself Karma World might be a little more careful not to risk attracting bad Karma upon themselves wouldn't you?

(Thanks to Harry Rickard for bringing this to my attention.)

No problem Lew, but if you could also credit George Shiers, he was the one who alerted me about this. :)

I hope you've contacted them... you want paying!!!

http://youthoughtwewouldntnotice.com/blog3/ You should add it to this, loads more artists getting ripped off!

An e-mail has been sent to them, Hackers. Now it's up to them to make a move, or not.

It's the most striking example of plagiarism I've seen in a long while. This one comes to mind as the worst-ever offender:
http://youthoughtwewouldntnotice.com/blog3/?p=1701
But there are, unfortunately, hundreds of others. That Nick Simmons case a year or two back was pretty bad. The trick is to change something enough to make it look like your own work, but I suppose you have to be able to draw to do that.

Looking at 'Youthoughtwewouldntnotice' was actually quite an eye opener and very depressing. Looks like there's little you can do to stop people doing this (unless you have a lot of money to pursue it). :(

Seems they have also mocked up a picture of a zit-free Pete with neater hair for in the game.

It's only the sincerest form of flattery when they pay you!